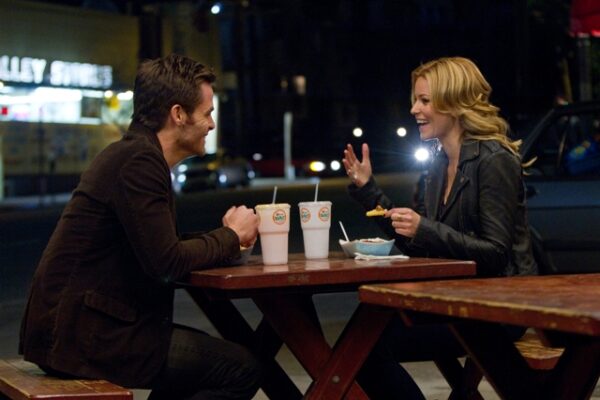 Chris Pine and Elizabeth Banks star in People Like Us. Photo courtesy DreamWorks

Sam, the very picture of a handsome, charming conman, exists in the New York fringe business world of barter, essentially “selling air;” and he is very good at it. When informed by his girlfriend, Hannah, that his father has just died, his baby blues go blank; an expression that Hannah has seen before but never in regards to what should be an emotional landslide. A landslide it is indeed, as Sam finds every way possible to miss his father’s funeral, showing up at his mother Lillian’s house in California after all events have ended.

Sam, who is up to his eyeballs in debt due to a major screw-up at work, already has his eye on the exit but delays in order to keep an appointment with the family lawyer. Instead of the keys to the family fortune, he is handed a shaving kit containing $150,000 and a note from his late father asking that he deliver the package to someone named Josh living in a downscale apartment. Josh, it turns out, is an 11-year-old kid and lives with his mom, Frankie, who makes a marginal living as a bartender – an ironic career path as she’s a recovering alcoholic.

Fully intending to leave and pocket the cash, Sam, is nevertheless, intrigued by the request and follows Frankie to her AA meeting where he discovers that her father was his father – a son of a bitch of the first order, whose influence on both of them remains the negative energy coursing through their veins. Stealthily following Frankie and Josh and gradually insinuating himself in their lives without revealing his true identity, all begin to grow and change.

“People Like Us” was a passion project for writers Roberto Orci, Alex Kurtzman and Jody Lambert, directed by Orci in his feature film directing debut. It is a very personal story and one based on, if not true events, certainly related events and true feelings as both Orci and Kurtzman discovered half siblings in their earlier years that had been unknown to them. Exploring the treacherous shoals of family toxicity and arrested development, Orci gives us portraits of people in pain, a pain whose root leads back to the same person, the deceased in question, and how individuals cope, or more specifically, don’t.

Gifted with an amazing cast, each member probes deeply into the inner lives of their characters. Christopher Pine as Sam has the kind of physical beauty that is mesmerizing, drawing women and men alike into his web. Like the wicked witch in “Snow White and the Huntsman,” his Sam makes everyone, especially his mother, pay for the lack of self-worth inflicted on him by his father. Elizabeth Banks’ Frankie is a damaged soul whose feelings of abandonment infect every aspect of her being. She tries valiantly to follow the beautiful example of her own mother, but too often falls back into the self-loathing that is her paternal heritage. Newcomer, Michael Hall D’Addario, as Josh, has the untouched naturalness found in talented child actors that can be hurt or enhanced depending on the director. Luckily he had Orci as a director because D’Addario’s performance is wicked and touching at the same time.

Michelle Pfeiffer, as so often has been the case, is luminous as Sam’s mother, Lillian, a heartbroken, complicated woman, still in love with the man who used her up, humiliated her often and fed her only enough scraps of intimacy to keep her coming back for more. But Sam always came first with her and she doggedly guarded his legacy even though he cast mountains of blame her way. Still young in years but haggard and bone tired, Lillian is almost out of patience and certainly of understanding. Of all the film’s characters, Lillian is the least on the page, so Pfeiffer’s portrayal is that much more impressive. Olivia Wilde as Sam’s girlfriend, is unfortunately, little more than a set of book ends for the film, pushing Sam to California and then reappearing when he has an epiphany-like transformation.

I especially liked the use of Los Angeles neighborhoods as bookmarks to the personalities and actions of the characters. Unlike New York, a city with a distinct personality, Los Angeles is harder to film in a meaningful character-directed way, but Orci and his cinematographer Sal Totino found a way to use neighborhoods to help define events and people.

There is, however, a major weakness that keeps this good film from being a better one and it’s one that is all too common. The film is too long by at least 20 minutes. So much of the end of the film is devoted to will he or won’t he tell her who he really is. There is no question that it is the dramatic lynch pin of the film; we are well aware of his conflict and well aware that he must find a way to resolve the issue. Taking too long, and Orci took way too long, only allows the audience focus to shift and wander when, instead, the need for tension and a tight finish are critical. Still, this is a film worth seeing and pondering the lifelong effect of parental decisions or indecisions on their children. At the root of everything is forgiveness and an ability to just get on with it.

Opening wide on June 29. Rated PG-13. Neely is a production executive in television and also writes a blog about writers at http://www.nomeanerplace.com.