Play the game like your life depends on it, because it does 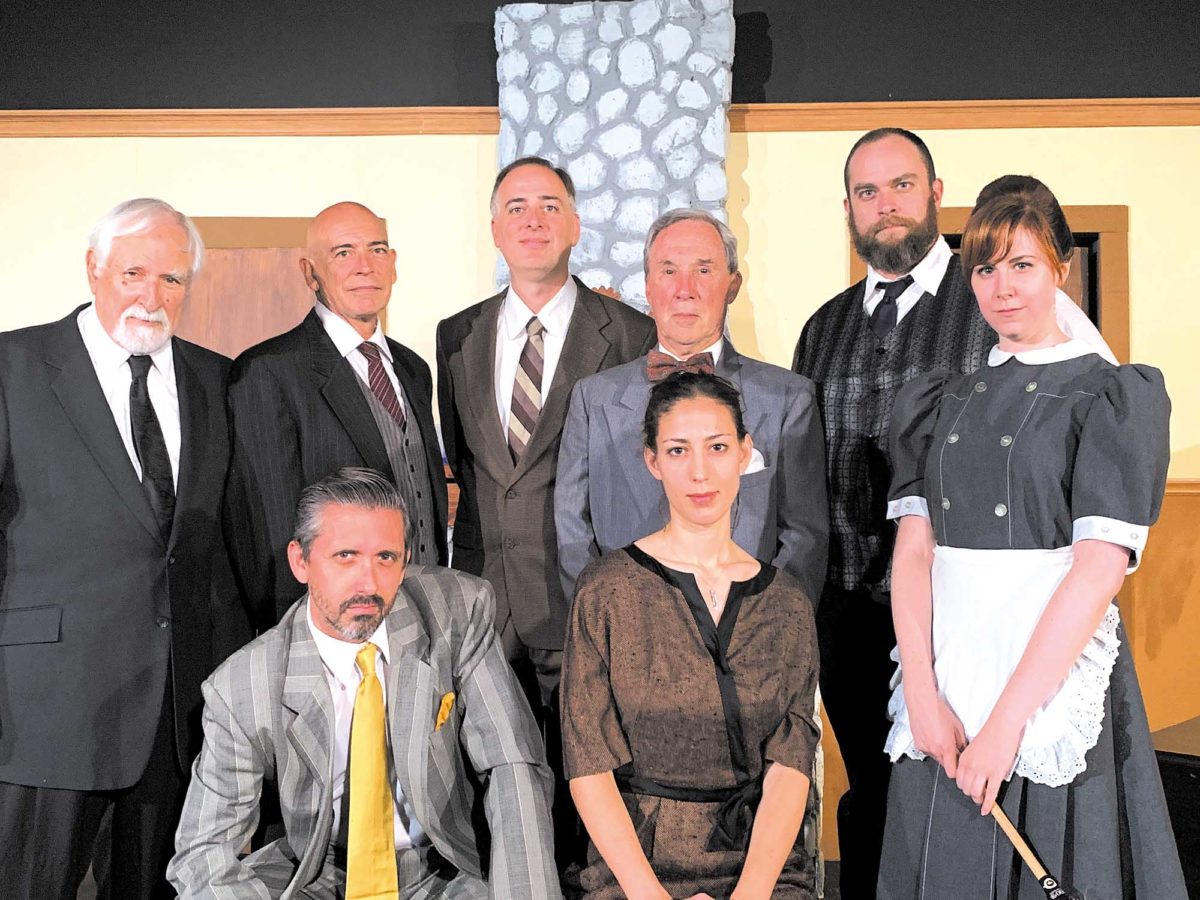 I would think that if your last name is Trapp, you’d be a little more careful about falling into one. But Howard Trapp (Jeremy Krasovic) clearly doesn’t know the first thing about not tempting fate.

Surf City Theatre has presented its share of murder mystery-thrillers, and “The Deadly Game,” written by James Yaffe and based on the 1956 novel by Friedrich Dürrenmatt mostly fits the bill. It opens Saturday in the Second Story Theatre and runs for three weekends.

The Swiss writer Dürrenmatt originally called his book “Die Panne” (The Breakdown), but Stateside it became known as “Traps.” Yaffe’s theatrical adaptation of it opened on Broadway in 1960, and in 1982 was released as a film starring George Segal, Trevor Howard, and Robert Morley.

Retired friends, Bernard Larouque (Michael Thorpe) and Gustave Kummer (Frank Perry) have gathered at the home of a former judge, Emile Carpeau (Steve Izant). Laroque was a former defense attorney and Kummer a former prosecutor. To fight off the boredom of retirement and old age, they meet regularly in Carpeau’s Swiss chalet to “play law,” One of the ways they amuse themselves is by going through the legal ceremony of prosecuting strangers who drop in. And so, when the American salesman Howard Trapp gets stranded in a snowstorm, well, we have a story, and one with serious consequences. But of course you’ve already guessed that. 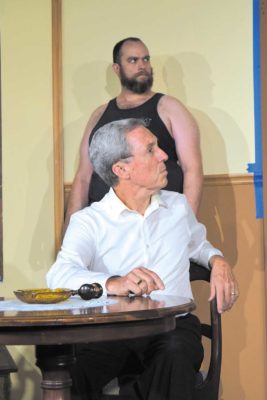 Steve Izant (front) as the judge, and John Patrick Driscoll as Pierre. Photo by Bondo Wyszpolski

Lisa Leonard is the executive producer and artistic director of Surf City Theatre, so what she says carries some weight. Let’s start by asking her why “The Deadly Game” appealed to her.

“Originally it was between ‘Deathtrap’ [Ira Levin; 1978] and ‘The Deadly Game.’ I love the dance and mystery fun of ‘Deathtrap,’ but this one is a much more serious show, which we don’t do a lot of.

“It’s beautifully worded,” she adds, “which is why I fell in love with it. Because basically it’s this dance that, specifically, the prosecutor and the judge just do around this guy, and he has no idea what has happened. He thinks it’s just a joke, a game, and these guys are getting more and more intense. It’s brilliant how they make him start questioning.”

Suddenly, Trapp finds himself “on trial,” and it seems to play out like a version of “The Spider and the Fly.”

Michael Thorpe plays the defense attorney Larouque. If you’ve seen any local theater, you’ve either seen Thorpe onstage or experienced his sound and lighting effects. He’s a mainstay at Surf City and he’s a regular with the Manhattan Beach Community Church Theatre, and he recently had a leading role with the Kentwood Players up in Westchester.

In this case, the role just fell into his lap: He was asked to step in when another actor didn’t work out.

“So, as of Thursday, I’m a member of the cast,” he says. “It’s [now] a matter of crunching and learning all the lines.”

At least he didn’t start from scratch. As the show’s technical director who had planned on just handling the lighting, Thorpe had attended the early rehearsals.

“I’d read (the play) a couple of times and I kind of knew the basic story, but that was pretty much it.” Turns out he had done himself a big favor.

In your mind, what makes this play so compelling?

“You get this psychological thriller kind of thing through most of the story,” Thorpe replies. “But it’s also touching on philosophical discussions, as to what is guilt and what is responsibility, and what should we be held accountable for? Basically, what kind of control do we have over ourselves?”

Some critics and reviewers have mentioned Kafka and Dostoevsky when discussing “The Deadly Game,” which they usually don’t when talking about “Wicked” or “Rent,” for instance.

“Bus Stop,” by William Inge, opens next month in Manhattan Beach. Are you involved with that?

“I’ll do the lighting for that,” Thorpe says.” I’ve seen rehearsals, and it seems like it’s going well, so I will not be sucked into the cast on that one.”

But they’ll know who to call if one of their actors has to cancel at the last moment.

Thorpe not only acts in nearly every beach city, he’s lived in most of them as well.

“I grew up in Manhattan, then I moved to Hermosa and lived there for quite a while, and now I’m in Redondo. Moving down the coast.”

In that case, he’s sure to find himself in Palos Verdes before too long (and that implies a change in fortune).

He laughs. “Yeah, but then I’ll have that awful drive down here.” On second thought, “Maybe I’d start doing stuff at the Norris.”

His track record puts him in line for that, doesn’t it?

Steve Izant, who plays the judge, Emile Carpeau, hasn’t been sitting in one place either. He and his wife lived in Hermosa from 1978 to 1989, and then after some years on the East Coast move back to the South Bay in 2014. Currently living in Redondo, they’re currently building a house in Hermosa.

As Izant phrases it, the judge is something of the ringleader in “The Deadly Game,” a man used to being in charge and taking command. 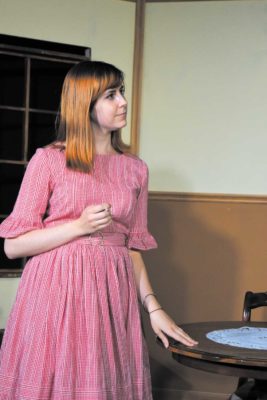 Carissa DeLaine as Nicole, the housekeeper. Photo by Bondo Wyszpolski

“So if there’s any sort of overarching theme,” he says, “it is that he directs his friends, because they all know where they want this whole thing to end up for Mr. Trapp.”

Izant has a well-organized method for learning his lines, and it involves dividing the number of times he speaks by the number of days until rehearsal goes off-book, meaning when everything is recited from memory with no scripts fluttering about the stage.

“I also use a digital recorder. I record the entire play, except where I speak. And where I speak I silently mouth the words so I create a gap. I can take that digital recorder with me anywhere, whether it’s just in the house or driving down the freeway, and I can listen to the play, and I learn to recognize the line before mine. Then there’s this air gap and I say my line and the play goes on. That’s how I learn my lines.”

If you’re getting the impression that Izant doesn’t leave much to chance, read on:

“I was not familiar with (“The Deadly Game”) until I saw the audition notice. I then did do some web surfing to find out what the play was about, and I actually bought a copy of it before I auditioned, because I wanted to make sure that this was a play that I could contribute something to. So I did, and I auditioned for the judge.”

I’m thinking that he should write a self-help book for would-be actors.

Izant played the prosecutor a couple of years back when Surf City Theatre presented “A Few Good Men.”

As to how he got into acting…

“I did no acting in high school or college,” Izant says; “it just never occurred to me. I had the luxury of retiring back in 2005, and after a couple of years of trying to figure out what I wanted to do with my life I stumbled across a newspaper article about a guy who retired.” But this fellow didn’t just stay home and watch football, he started doing background voices, presumably for TV or film. “I thought that sounded interesting,” Izant continues, “and that’s how it all started. And I end the story by saying, ‘It’s been downhill ever since.’”

After this show, maybe he’ll become an actual judge?

“Well, I have that type of look and voice where I play establishment guys,” Izant replies. “I can be your politician, your judge, your businessman, anything in that particular vein. So I look for those kind of roles.”

You play your strength, he says, pointing out that he wouldn’t audition for the role of someone younger, like Howard Trapp in this case. “That would be foolish on my part.

“You go for what you know and what you look like, and sometimes it works out.”

So far it’s working out fine for this suspenseful thriller of a production.