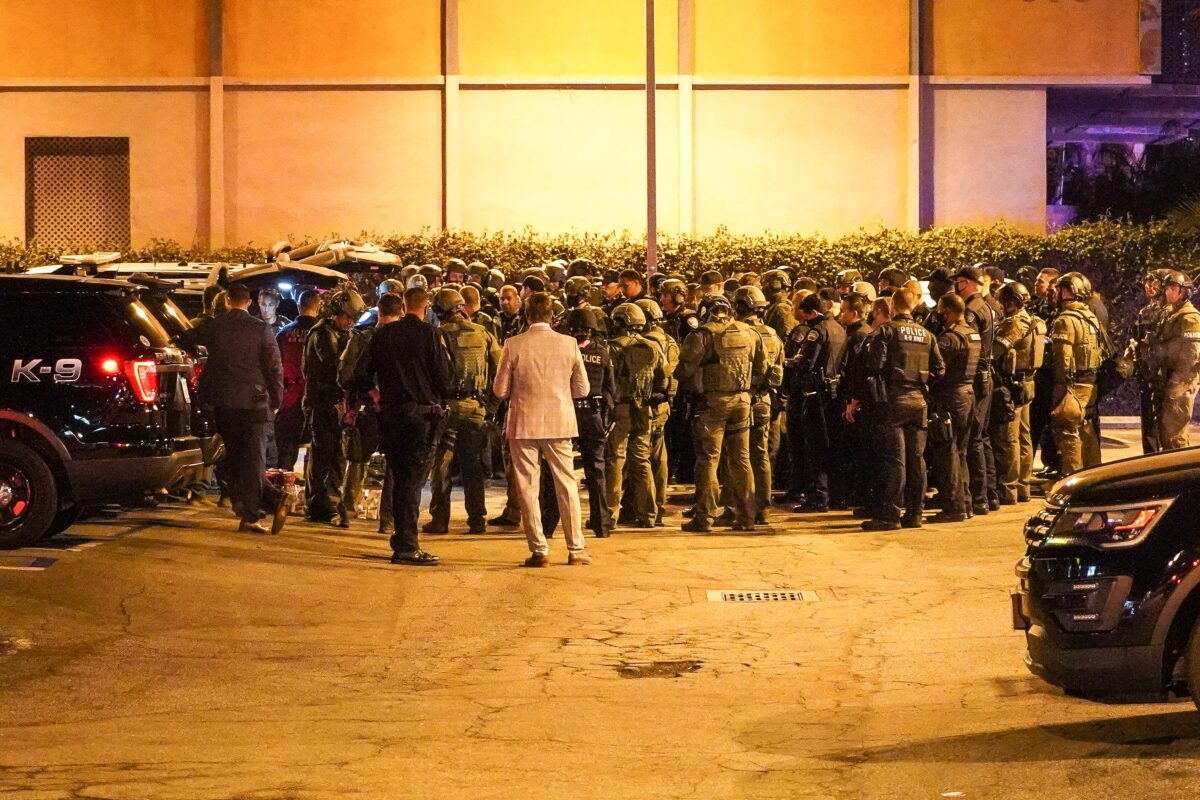 Officers from over a dozen law enforcement agencies participating in a containment operation in South Redondo that led to the arrest of four murder suspects, Saturday evening. Photo by Howard Thorne

An all-night search involving 12 police departments, helicopters, and drones ended Sunday morning with four suspects being apprehended for their possible connection to a fatal shooting that occurred around 8 p.m. Saturday in South Redondo Beach.

The victim, whose identity has yet to be confirmed, died of multiple gunshot wounds to the upper torso. Officers arrived at the scene after receiving calls about gunshots on the 600 block of North Juanita. The suspects had fled in a vehicle, heading south on Prospect Avenue, then east into the neighborhood between Faye Lane and Susanna Avenue. They then abandoned the vehicle and continued to flee on foot.

“Just a massive area,” Police Chief Keith Kauffman said. “Because of the incident and the fact that guns were involved and we were chasing people following a murder that had just occurred, we requested the use of SWAT teams to do that search.”

“I know the helicopters kept everybody up most of the night,” Kauffman said. “That’s something we do to make sure that the suspects stay bedded down and keep the residents safe. We try to keep people from moving within that scene. That search lasted all night. … It was just an awesome show of coordination from our department along with all of our partners.”

A message from the Redondo Beach Police Department’s official Twitter went out via text message and social media at 8:54 p.m.: “Shelter in Place until further notice. Thank you.” At 6:45 a.m. the next day, an update was posted: “Containment has been shut down. Shelter in place lifted. LASD [Los Angeles County Sheriff’s Department] is conducting the investigation.”

Lieutenant Shawn Freeman, who often serves as a media liaison for the Redondo Beach Police Department, said he sees the experience as an opportunity to learn how to handle mass messaging in containment situations.

“We don’t have a full-time PIO [public information officer],” he said. “So it’s one of those learning opportunities, for us to figure out how we can do this better next time.”

“It was a huge, huge response,” he said. “Thanks to all the officers. We’re in great debt and gratitude for the way they handled it and kept us safe.”

“I was very proud,” Kauffman responded.

“We’re all very proud,” Brand said. “It was a great ending to what could have been a lot worse. And our condolences to the family we don’t know anything about yet.”

The investigation is being handled by the Los Angeles County Sheriff’s Department, which had not responded to a request for an update by press time.

“We understand when something like this happens we have a lot of community concern,” Kauffman said at Tuesday’s council meeting. “The issue with this case is that it’s still underway. The information is constantly changing.”