Police search for man who shot at officer 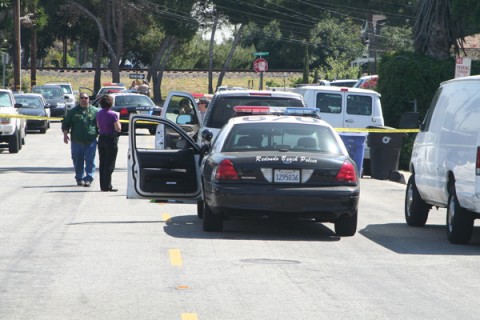 Police set up a containment area as they conduct a ten-hour search for a man suspected of shooting at a Redondo police officer Monday morning. Photo by Mark McDermott

An intense, ten hour manhunt failed to locate a man suspected of shooting at a Redondo Beach police officer in the early hours of Monday morning.

The incident began at 1:15 a.m., after the officer pulled alongside the man walking along 166th Street in Lawndale,  just a few hundred yards east of Redondo’s Inglewood Avenue border. According to police reports, the man appeared to be hovering around parked vehicles on the street. As the officer exited his patrol car, the man took a single shot at him. The officer returned fire, firing at least three rounds.

A neighbor who identified himself as Hector F. said he heard the exchange. He said the first thing he heard was a man scream loudly. It seemed, he said, that the man taunted the officer before firing.

The neighbor said he looked out his window to see the officer with a handgun in one hand and his radio in the other, using his patrol car’s door to shield himself as he called for assistance. Every law enforcement agency in the South Bay responded within minutes, flooding the neighborhood with police vehicles as helicopters swooped overhead.

The Los Angeles County Sheriff’s Department was the lead agency, because Lawndale is its jurisdiction, and quickly set up a containment area. A SWAT team and K-9 units combed the area. Police believed the man had possibly bedded down in the area to wait out the search.

Neighbors woke to discover that they were on lockdown. Dave Grundstad said he was about to leave for work at 7 a.m. when an officer interceded.

Nobody was allowed to leave the neighborhood until about 11:45 a.m.

“Everybody on the block missed work,” said Dean Horne.

Neighbor Randy Travis heard the gunfight and later discovered two bullet holes on either side of his pickup truck’s bed – entry holes on one side, exit holes on the other. 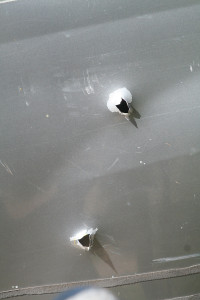 The gunfight left bullet holes in two vehicles on the street, including the back of a pickup truck. Photo by Mark McDermott

“It sounded like it was right in my front yard,” he said. “Apparently, it was.”

Another vehicle parked on the street had a bullet hole through its windshield.

“If you look at law enforcement deaths nationwide, it generally occurs during contacts with a single officer by himself, what the majority of people would consider a routine stop – although in law enforcement, there really are no routines stops,” Hoffman said. “Because as soon as an officer lets his guard down, he becomes more vulnerable…that is when tragedy can strike.”

The suspected shooter, who as of Wednesday had still not been detained, was described only as a male Hispanic wearing a black hood.

“At least everyone walked away from this thing,” Hoffman said. “The flip side is this guy obviously made a conscious decision to fire a gun at a police officer. We definitely want to get him off the streets – this is definitely not a guy you want roaming around out there.” ER