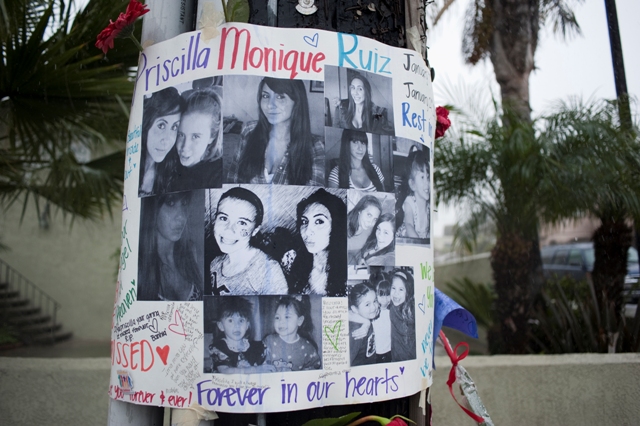 Photos of Priscilla Ruiz adorn the North Redondo neighborhood where she lost her life in a car accident. Photo by Chelsea Sektnan

Priscilla Monique Ruiz always had a smile on her face. Whenever a friend needed a ride, she picked up the keys and brought them home. When they were out with friends having dinner or drinks and somebody needed help with the check, she opened her wallet and helped them out.

“She was always nice to everybody,” her boyfriend Richard Evans said.

Early Saturday morning at about 3:03 a.m., shortly after dropping Evans off at his house after celebrating his birthday at Club Dulce in Hollywood, Ruiz’s car traveled eastbound into the opposite lane of traffic and hit a taxi head-on near the intersection at Grant and Rindge Lane. According to police, the 19-year-old died instantly.

“She didn’t fall asleep, and she wasn’t drinking,” said Evans. “It was just an accident.”

Evans speculates that she was trying to make a turn when the taxi, coming at a faster than normal speed, hit her before she could safely make the turn. Authorities are still unsure as to why the two cars collided and the accident is under investigation.

The driver and two passengers in the taxicab suffered moderate injuries and are expected to survive. “It was a bad day to be a passenger,” investigator Bill Turner said.

Evans was awoken early in the morning by his mother and was shocked by the news of Ruiz’s death. He had just said goodbye to her hours before and never would have imagined it was the last time.

Hundreds of people throughout the community were shaken by the early morning wake-up call, and even more showed up at the intersection of Grant Ave. and Rindge to remember Ruiz’s warm heart and shining smile on Saturday.

Throughout the day flowers and candles began covering the corner as friends and family came together to find comfort in each other’s arms and mourn the loss of the young Redondo Beach woman whose life was taken so quickly.

“She was just a sweet girl,” said Redondo Shores councilor Lissa Watts. “She got along with everybody and was well liked. It’s just sad.”

Ruiz, a Redondo Shores graduate and El Camino College attendee wanted to be a nursing assistant, and after successful year at Shores, where she graduated early, she was well on her way after finishing her first semester at El Camino College.

“She was really bright,” said Redondo Shores English teacher Patrick Vaughan. “She gained confidence in herself and was a model student. She was always willing to help if you needed help and she always had a smile on her face. She was one of those kids you remember because she was so nice.”

Ruiz was working at McDonalds on Torrance Blvd. and lived in the same apartment complex as some of her family members.

Evans will miss a lot of things about Ruiz, but most of all, he will miss her smile.

Ruiz is survived by her father Allen, mother Tara, younger sisters Elena and Rosie, and two grandparents. At this time, her funeral is expected to be on Monday at 11 at the Hope Chapel Christian Church at 2420 PCH, and a viewing will be on Sunday from 5-9 p.m. at Rice Mortuary located at 5310 Torrance Blvd.

The collision is still under investigation and the police department is requesting anyone who has information or who may have seen the collision to contact Investigator Jeff Mendence or Investigator Bill Turner at 310-379-2477. ER