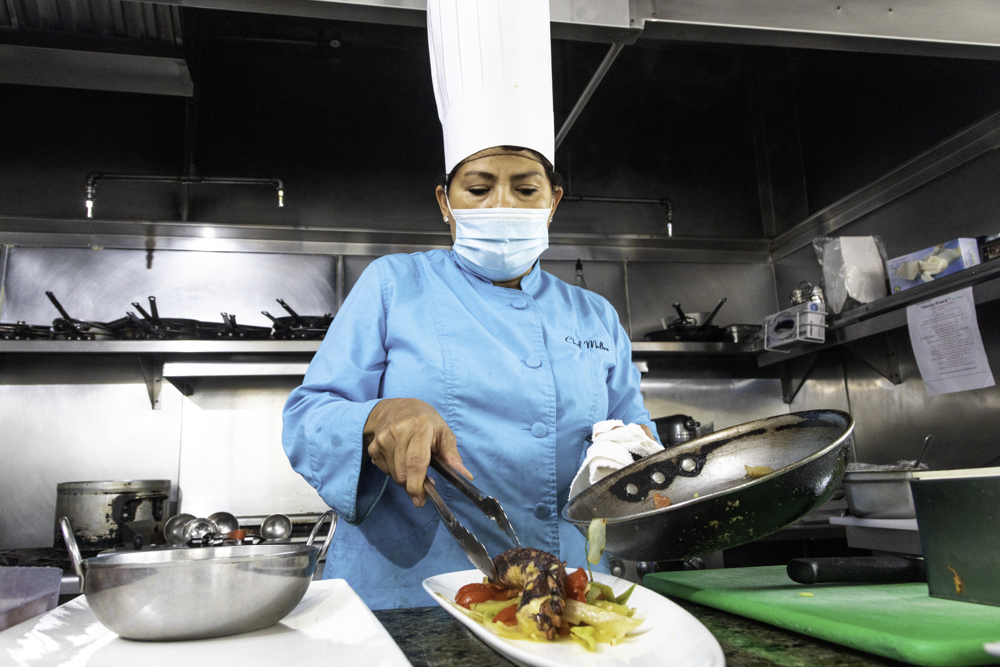 Dining in downtown Hermosa has a certain style — loud, hip, and flashy, both high and low concept presented with larger than life exuberance. It’s great when you need a shot of energy, a reminder of the vividness of beach life, but there are times when the opposite is in order. Get away from the bustling pier plaza and you’ll find oases where the vibe is relaxed and chill, the pace unhurried. They are places to unwind, and I would bet that if you take pictures of diners over the course of an hour you could see their shoulders drop from somewhere close to their ears, the worry lines in their faces smooth out.

Chef Melba’s Bistro has a successful strategy of being out of step with all things hectic and buzzy, which has served them well for 15 years. When I reviewed the place in 2005 I remarked on the incongruity of a food-centric place in a nightlife town, and the contrast has only become more marked. While the menu has evolved over time some things are consistent, namely a focus on seasonal vegetables, a deft hand with all manner of seafood, and a very personal style of service. Curious about an ingredient or need to deal with a food allergy? The chef will be out of the kitchen in a moment to consult. 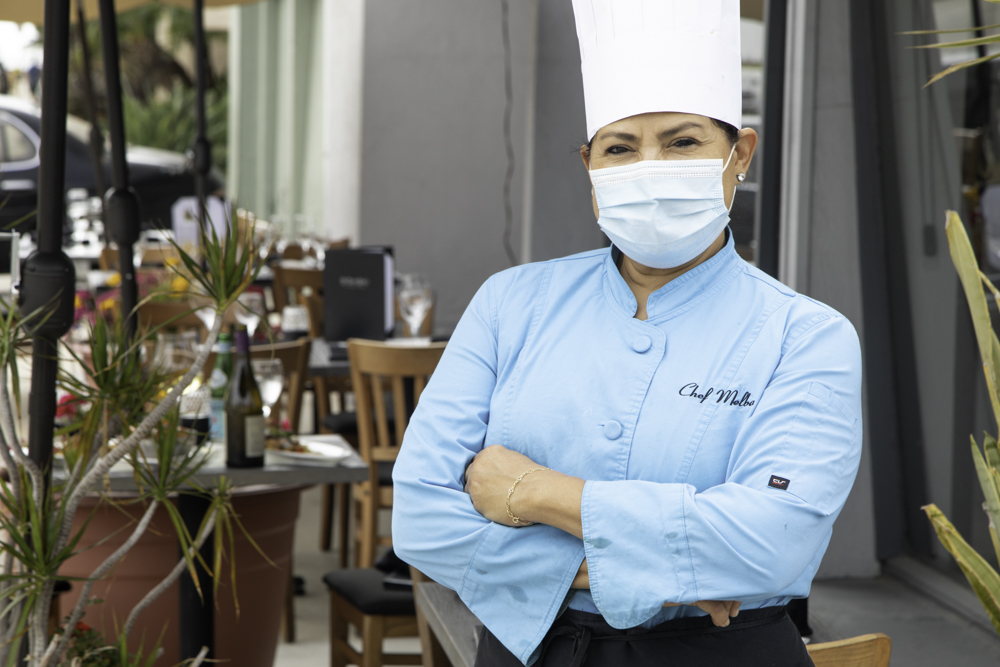 One upside to the pandemic is it has allowed Chef Melba to offer sidewalk dining. Photo by JP Cordero

This combination of environment and personal style is a challenge when the pandemic has moved everything outdoors, but Melba and her longtime server John are doing their best to maintain the style of old. The tables by the corner of Hermosa Avenue and 15th  Street are flanked with plants and some have an ocean view that rivals any in town.

On a recent evening we started with a cup of Italian wedding soup and slow-cooked Spanish octopus over vegetables in a lemon verbena broth. As is almost always the case, the octopus was as much a color and texture element as anything else — they don’t have a lot of flavor by themselves. Braise that tentacle sous vide style with vinegar and citrusy verbena and then give it a quick ride in a pan with hot olive oil and it takes on the flavors of all around it. The vegetable mix includes red onions, tomato, purple olives, scallions, and parsley, and if they run out of tentacles I’d happily have this as a spaghetti sauce because it’s good all by itself. Melba serves the starters with a rosemary bread, and you’ll want it to mop up any sauce that remains. 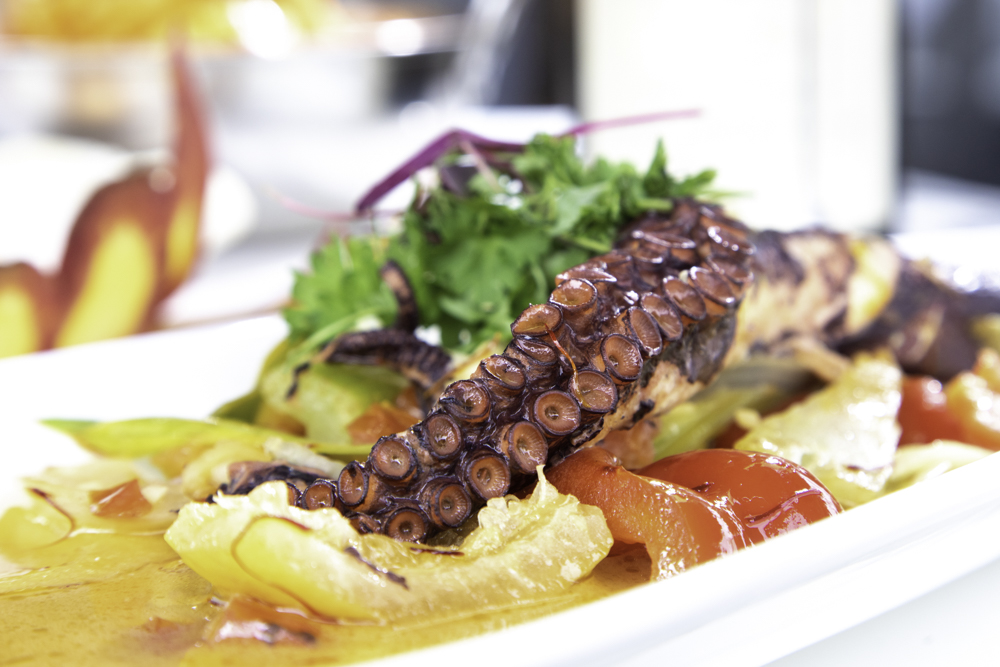 The soup of the day was a tomato-basil, but John offered a special of stracciatella, the famous Italian wedding soup. This is a deceptively simple item, eggs beaten into a seasoned meat broth along with spinach and parmesan cheese. It’s the same idea as a Chinese egg drop soup or Greek avgolemono, and like those the name of the game is subtlety. No single flavor stands out, but there is a dash of citrus, a hint of nutmeg and green herbs, and it all comes together in a rich, satisfying way.

We asked John to pair two wines with our starters, and he recommended a Sileni Sauvignon Blanc with the soup, a Talbott Chardonnay with the octopus. The Chardonnay had enough fruit and oak tannins that I wouldn’t have expected it to work, but it did, and the Sauvignon Blanc was on the money.

For our main courses we selected fish and chips and a bowl of asopado, a culinary remnant of colonial Puerto Rico. Anyplace Spaniards settled that has a coastline has some item involving fish, rice, and broth. When dry it’s a paella, when wet it has many names, one of which is asopado. If you think of a Manhattan seafood chowder with rice in it, piled high with fish and shellfish and dusted with aromatic herbs, you’re close. Not quite there, because your imagination probably didn’t supply the two fat grilled scallops on the side or the slight peppery tang in the broth, but close. You probably left out the giant grilled prawn that topped the seafood too, which was like icing on the cake. Melba’s claim to fame when she opened this restaurant was as a head chef for the McCormick and Schmick’s seafood chain, and she hasn’t lost a bit of her touch with all things that live underwater. 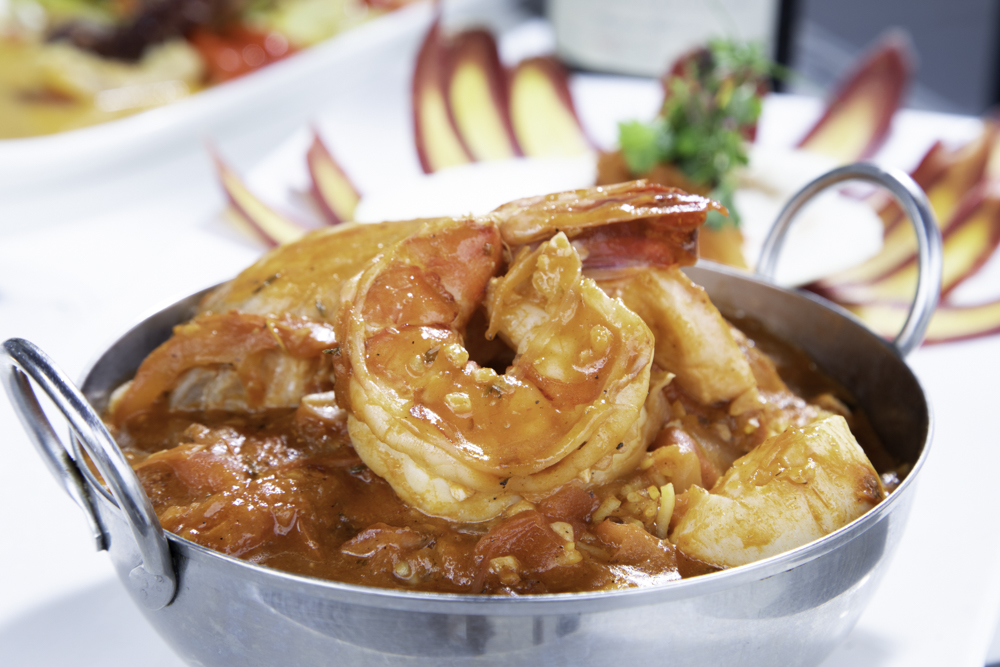 I was surprised when my wife ordered the fish and chips, something I have never tried at Melba’s despite all the visits we have made over the years. It seemed like such an ordinary thing, when there were more upscale items like the salmon in wine sauce with melon and strawberry salsa. My wife happened to be in the mood for a dish that she loved and wanted to see how Melba would execute it. The four filets were coated with an herbed batter with just a little crispness rather than the shattering crunch you get from beer batter or the tempura, and by some alchemy there was hardly a spot of grease on plate or palate. It was another example of how a simple item can be elevated by perfect execution. The fish was served with a good homemade tartar sauce and malt vinegar, and I liked the fries with the tartar sauce more than ketchup. 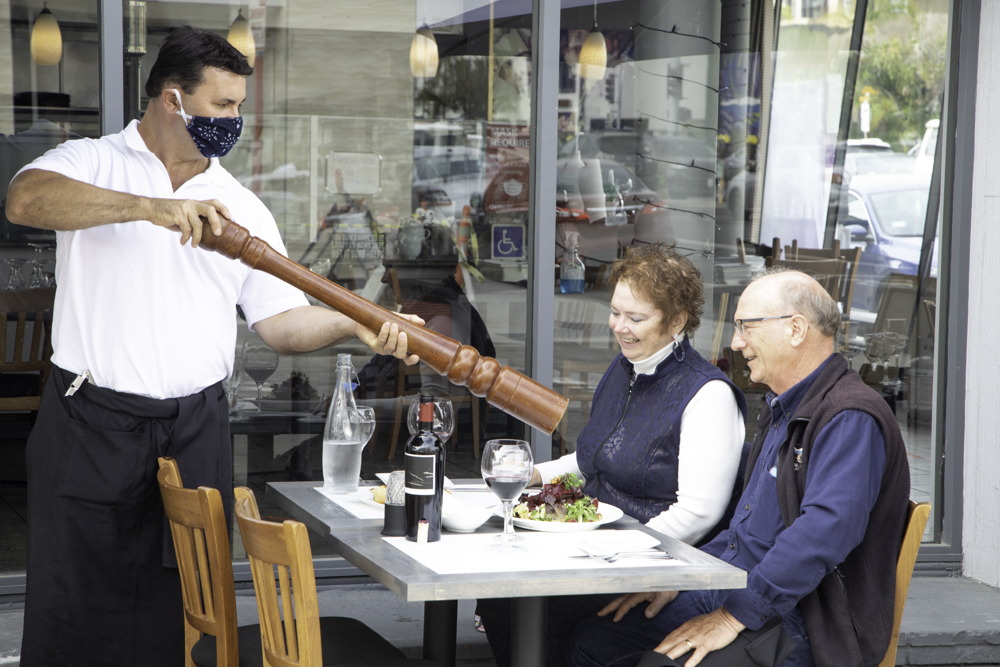 John surprised us again with his wine selections, a Super Tuscan from Bocelli Wines and a blend called CVC from Calluna. Like the first pairings one was Californian and one European, and it was an object lesson in the different styles of winemaking. Again, I slightly preferred the more subtle European to the bold New World style, though we enjoyed both.

For dessert we stayed with an old favorite, the chocolate box that has been on Melba’s menu since the day she opened. This is literally a box made of chocolate, with a layer of custard at the bottom topped with berries, served over a fruit coulis. One of these is easily enough dessert for two people, and a wonderful one for anyone who likes fruit and chocolate.

When we were given the dinner menu, we couldn’t help noticing the brunch selection on the other side, so we went back a few days later. We decided to start by sharing a portion of tuna tartare which was advertised as coming with cucumber, scallion, and lemon, with white soy and taro chips. They apparently hadn’t updated the menu or she was tinkering with the recipe, because this was a bit different than we expected. It was topped with shaved limes rather than lemon, and the soy-based sauce had a nice red pepper kick. It was more a poke style then a tartare, where the fish is usually less enhanced, but very good nonetheless. 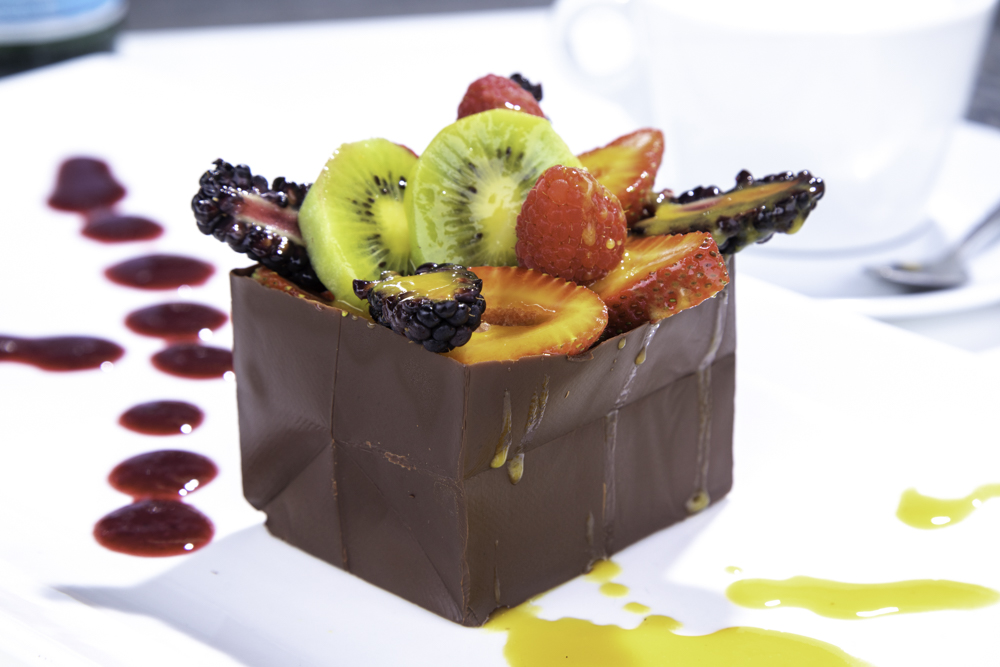 The Chocolate Box has been Chef Melba’s most popular desert throughout its 15 years. PHoto by JP Cordero

We continued with non-seafood items, an Italian sausage and gruyere cheese frittata and a grilled chicken skewer that had been marinated in yoghurt and herbs. For those who have never tried meat with a yogurt marinade, the slight acidity of the yogurt makes the meat meltingly tender, adding a slightly tart tang as well as helping to infuse whatever spices are present. In this case they were green herbs, garlic, and pepper, and since the skewer was topped with a mix of chopped mixed vegetables and fragrant basil there were different flavors in every bite. The big skewer was over saffron basmati rice and was a substantial portion.

The frittata was a classic open face omelette, an egg pancake topped with melted cheese, tomato, green and yellow squash, and slices of Italian sausage. It was nothing you couldn’t do at home if you had all the ingredients handy, but you probably couldn’t do it this well. It came with a spinach salad and some fried potatoes, a refined version of the classic American breakfast of sausage, eggs, and potatoes.

Melba’s location a few blocks from Pier Plaza has made this a locals’ place, their quiet hangout when places a few blocks away are roaring. There were some empty tables at brunch because many people don’t know the place is open then, and that’s a shame. This is one of Hermosa’s treasures for those who appreciate subtle invention, and if you haven’t stopped in lately, you should. 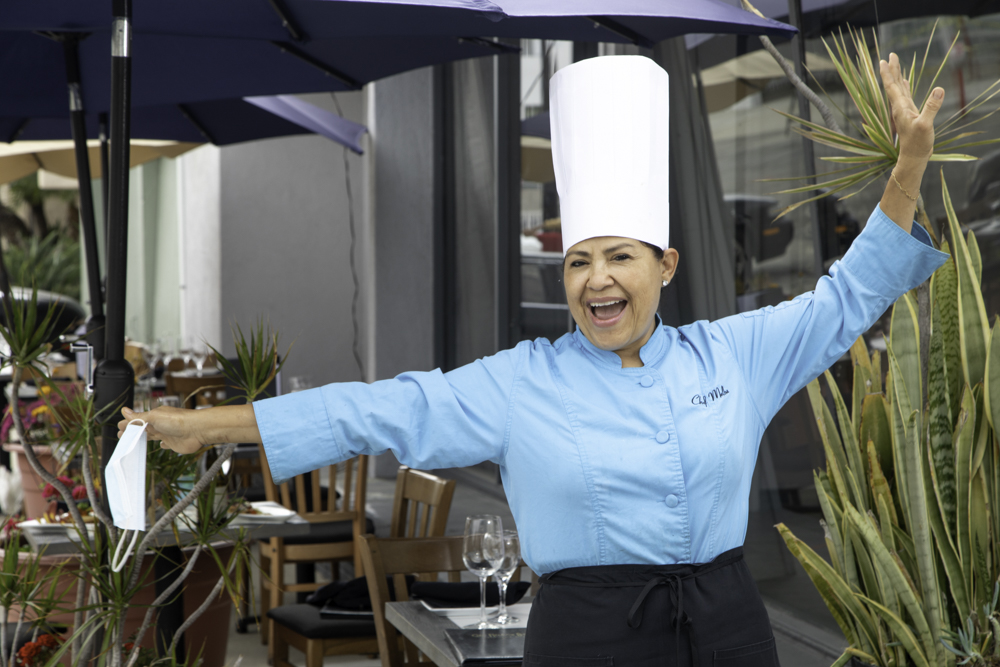