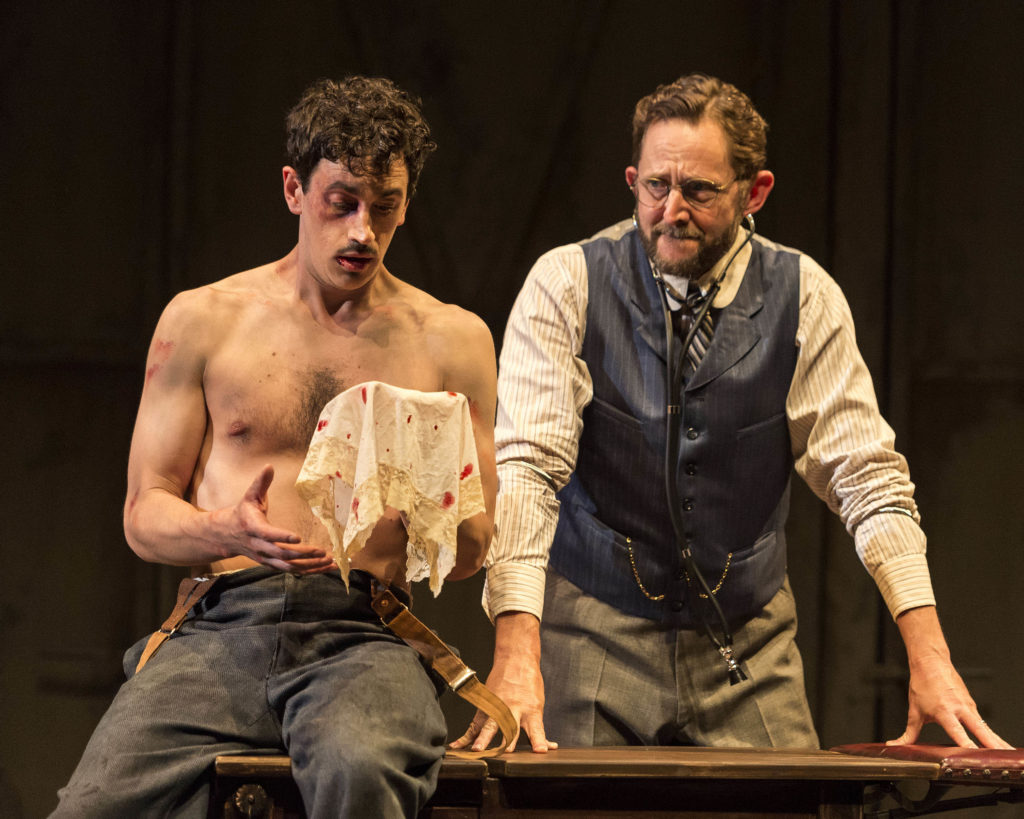 Tubercular Bells: “Archduke” at the Taper (a review)

The Japanese novelist Yukio Mishima would have grasped the opening and closing sequences of Rajiv Joseph’s “Archduke,” onstage through June 4 at the Mark Taper Forum. Mishima said that “We do not collide with our destiny all of a sudden,” but seemed to be introduced to it, little by little sometimes, or through chance encounters, until Fate seals the envelope once and for all. In this case, “Archduke” begins with a seated young man nervously twisting a bloodied handkerchief in his hands while a patient but soon exasperated Dr. Leko (Todd Weeks) tries to drive home the verdict that he’s seriously ill with tuberculosis. At the end of the play, the same young man, Gavrilo Princip (Stephen Stocking), is again nervously holding a bloodied handkerchief.

In between lies our story, Joseph’s story, a tale as incredible and as improbable as it may have been in real life, when Princip and two other assassins set off for Sarajevo from Belgrade to murder Archduke Franz Ferdinand and his wife, Sophie. That was in June, 1914, and Princip’s two fatal shots from his pistol are said to have precipitated the first great conflagration of the 20th century.

Joseph (who also authored “Bengal Tiger at the Baghdad Zoo”) may have tracked historical events, but he’s embellished people and events along the way and, in the eyes of some, trivialized the main characters: Princip and his fellow assassins Nedeljko (Josiah Bania) and Trifko (Ramiz Monsef), as well as Black Hand leader Col. Dragutin Dimitrijevic (Patrick Page), the latter nicknamed “Apis” (after the Egyptian bull god). But let’s not forget that we’re watching a work of creative fiction, not a PBS documentary, and as a playwright you’re entitled to something called artistic or poetic license. If you want history, go to the library; if you want entertainment, go the Music Center. It’s that simple.

The opening scene in the doctor’s office isn’t very promising, however. Princip, who we know will go on to commit murder, springs into action as a distracted buffoon, expressing sympathy for an anatomical skeleton, and I would even add “going to pieces” over it, except that he knocks it over and it’s the skeleton itself that comes apart. It’s not an auspicious beginning, but, speaking of pieces, the pieces do come together later on. It’s not a gratuitous piece of nonsense, in other words.

Every character in this production, smoothly directed by Giovanna Sardelli, performs beautifully, but the one who will stand out for many viewers is the ringleader of this nefarious operation. As Dimitrijevic, Patrick Page is an older (mid-50s in real life), commanding figure reminiscent of a radicalized, demonic Christopher Plummer in “The Sound of Music,” but he’s also very, very Shakespearean, as if someone had pulled him from “Lear” or “Macbeth” only hours before, and none of the residue has been shed. 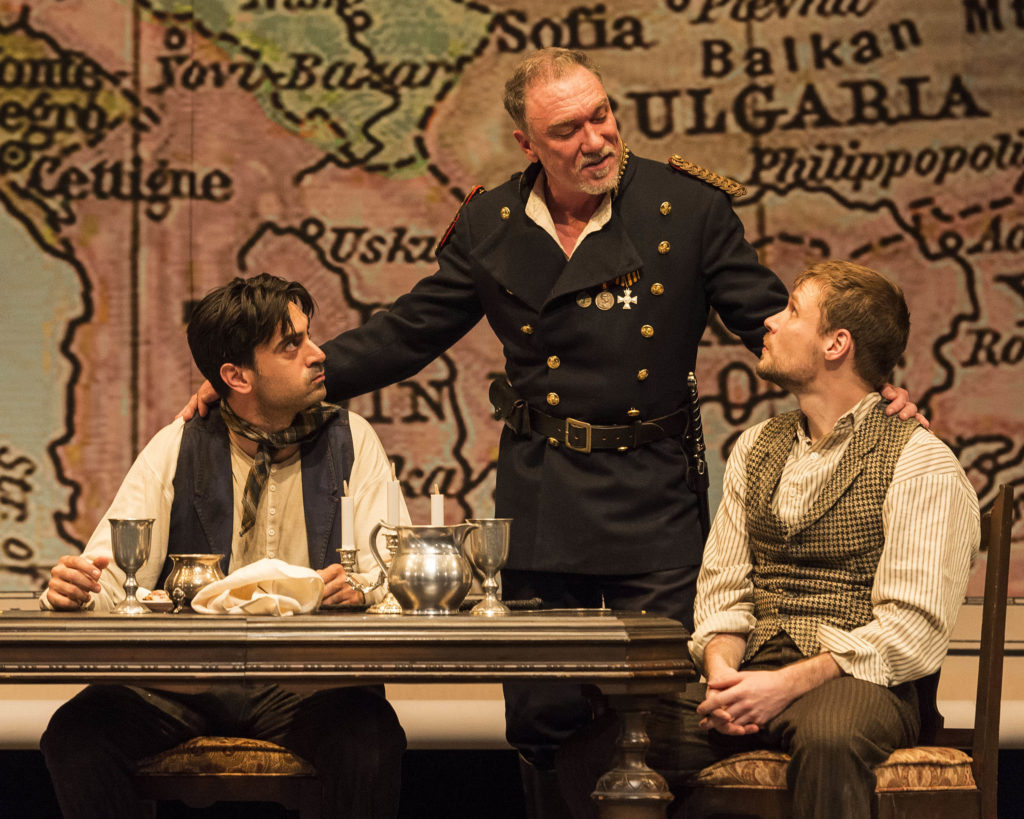 Dimitrijevic rails about Serbian independence and Slavic unification, but he needs martyrs to carry out the foul deed he has in mind, and to this end he seeks “lungers,” young tubercular patients who don’t have much to live for anyway and no time to live it even it they did. Yes, as some people have noted, the three recruits do seem at times bumbling and hapless, but in fact they just don’t ever seem wholly committed to the abstract ideal being foisted upon them, and which they seem wheedled into accepting. Innocents abroad, in other words. By way of contrast, Dimitrijevic is both fiery and elegant, and appears to relish telling how in 1903 he took an active role in the brutal slaying of King Alexander of Serbia and Queen Draga in their palace bedroom. Cold-bloodied killer that he is, however, there’s yet another stark contrast, and this is in the way he continually defers to Sladjana (Joanne McGee), his elderly, lame servant. She mutters and cackles, one more actor seemingly yanked straight from Shakespeare. 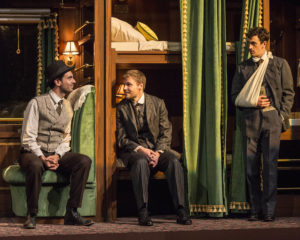 The second act of “Archduke” loses a bit of its momentum, with much of it taking place in a luxurious sleeper car (scenic design kudos to Tim Mackabee) in which the three lads/assassins reveal a more toned-down and reflective side of their personalities (not so unlike the michiyuki in Kabuki plays, a leave-taking of sorts where doomed characters may yet acquire dignity). Rather than go through with a deed that will forever enshrine them in history books, Nedeljko and Trifko would rather have a tasty sandwich and fall into the arms of a young woman. In many ways, these young men, who should have remained peripheral figures at best, remind me of Tom Stoppard’s Rosencrantz and Guildenstern, those incidental characters in “Hamlet” who are murdered once they’ve delivered their message.

So the humor, which at least keeps us on our toes, in the end rises to become a sort of wistful, self-deprecating humor, of the sort where one eye weeps while the other smiles. In this, I feel, Joseph has succeeded. The work is riveting; the cast superb. On the other hand, those who decide this is a bumpy carriage ride over stones of comedy and tragedy can certainly make their point.

The ending is a bit abrupt because it comes at us rather quickly. It does, however, hark back to the first moments of the play, and at the same time is the opening salvo for the brutal war that lies ahead.