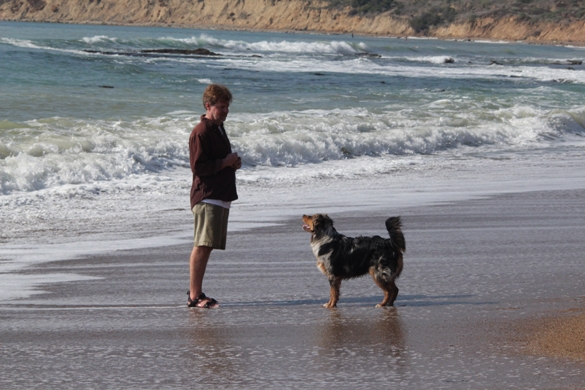 The narrow stretch of beach below Trump National Golf Course has been a favorite spot for decades for people to let their furry companions frolic in the surf. But until last week, the beach was technically off-limits to canines.

The Rancho Palos Verdes City Council made the dog beach officially legal for at least the next year when it voted 4-to-1 last week for a one-year evaluation phase. The 5-acre stretch of beach marks the third official dog beach in L.A. County with about 60 in all of California.

Councilman Jim Knight, who said he often used the beach with his own pets, voted “no” for concern over crowds and wildlife. He cited opposition from Heal the Bay and Santa Monica Baykeepers as well as the Trump organization.

“We’re going to be one of the only dog beaches around,” Knight said. “I’m afraid it could get out of control.”

To get down to the beach, most visitors park in a public lot alongside the country club at the Trump golf course. In a letter to the city council, Lili Amini, general manager, said for the city to sanction the dog beach would be a “complete disaster.”

“Being that we are the sole property that has been directly affected by the existing problems with dogs and some careless owners, we cannot imagine the complete disaster just waiting to happen,” Amini wrote. “To have a golf course be a gateway for owners and their dogs is a complete safety hazard and a major liability to the city.”

City officials said they found no substantive liability from allowing the dog beach. In its decision, council members expressed a strong desire to enforce rules requiring dogs be leashed as they pass through the Trump grounds.

An estimated 140 people and 47 dogs make the descent to the beach each day with greater numbers on the weekends, based on a city staff report. The golf course alone hosts more than 100 golfers and 300 visitors daily to the clubhouse restaurant on average.

The council also approved a six-month environmental impact review for about $30,000 to consider the effects of dog waste on sand and sensitive marine life. One resident told the council to save its money.

The cost to manage the beach, meanwhile, is estimated to be less as an off-leash area – around $38,000 per year – than enforcing a canine prohibition, which could cost more than $50,000 annually.

Few civic issues draw more people to a city council meeting than a proposed dog park. Last week’s public hearing on the dog beach was no exception. The council received more than 300 pages of written comments prior to the meeting with more than 70 percent in support.

Close to 30 speakers at the two-hour public hearing were nearly equally divided, painting widely different views of the atmosphere at the beach. Kathi Wolfrums, a long-time RPV resident, said she used to be able to walk on the beach in a meditative state, but not anymore because of what she described as large packs of roaming dogs.

“Now it’s gotten to the point where it’s so crazy with the amount of dogs,” she said. “It can be really frightening and intimidating.”

For Cornelia Bernstein, the dog beach represents a treasured place where her large breed dog can exercise. In the past three years she’s been going down to the beach three times a week and said she’s never noticed it overcrowded.

“I feel dogs are marginalized — there’s no place for them to go,” she told the council. “Large dogs need to swim. My dog gets his exercise by being off-leash and swimming.”

Leading up to the city council meeting last week, some observed the notices for the public hearing seemed to increase the number of visitors to the beach. And that’s exactly what local residents fear if the city puts up signs and advertises the fact it has one of the county’s three dog beaches.

Jeff Dorsett, an RPV resident, said traffic down to the beach started really picking up about a year ago when he noticed more aggressive breeds. Dorsett said he doesn’t take his kids down to the beach anymore for fear of the dogs. He also worried about the landscape.

“Unleashed dogs degrade our ocean preserve,” Dorsett said. “Tearing up and down bluffs and destroying a treasure trove of native flora.”

Oliver Hazard, an L.A. County lifeguard who’s lived in the Portuguese Bend area for years, said he was opposed to the dog beach because of the attention it could bring.

“We have a mile of sand,” he said. If we give half of it to the dogs, I just don’t think that’s a wise decision to make.”

RPV resident Barry Shapiro joined the chorus in favor of the park. With no reports of incidents to the LA County Sheriff’s Department in recent years and just one dog bite reported to the L.A. County animal control in Carson since 2002, Shapiro said the dog park is adequately safe.

“If you have a problem with dogs, there are plenty of other beautiful areas you can go to,” Shapiro said.

The council is expected to revisit the issue in a year to decide whether or not the dog beach should permanently become legal. ER