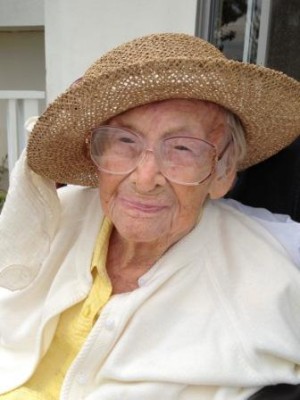 Bonita Zigrang still remembers like it was yesterday singing on the grandstand with her three sisters at McCarthur Park, then Westlake Park, in downtown Los Angeles around 1920.

Their bright voices on those summer days caught the attention of a young canoe pusher from Loyola High School named Charles who she’d later marry and spend the rest of her life.

Last week, Bonita celebrated her 109th birthday with friends and family at her home in Rancho Palos Verdes where she lives with a full-time caretaker. A larger party awaits next week.

Asked what the secret is to living so long, Bonita said, “Just being nice to everybody.”

“I attribute it to mother never letting anyone bother her,” Richard said. “If it bothered her, she’d say, ‘Forget it. It will all work out.’”

Bonita is reportedly the oldest living person on the Peninsula, though it’s unclear how many others are over 100 in the local area. The US Census estimates that 1.73 people out of 10,000 reach the age of 100 and 82 percent of them are female. Next year, Bonita will join an even more exclusive group known as super-centenarians, only achieved by one in 1,000 centenarians.

Born in 1904 in East St. Louis, Bonita moved with her parents and two sisters to Los Angeles when she was six. Her father, who was a singing waiter, died in a scaffolding accident, leading her mother to rent out part of their downtown house to male boarders.

The experiences and the people she was exposed to made for colorful stories growing up for Bonita’s son 83-year-old Richard Zigrang, a long-time dentist on the hill who’s now retired.

“There was a time they would sing at the Venice pier and stand in front of the carousel or rollercoaster in Santa Monica and sing to draw a crowd,” Richard recalled.

When she got older, Bonita worked in a music shop where she helped compose original pieces. Later she and her sisters performed with the Orpheum circuit all over Southern California. They went on to perform as the Smith Sisters. And during a stint singing with Margaret King, Bonita was one of the opening acts at the Balboa Theatre in San Diego when it first opened.

About five years ago, after the city had revitalized the old theater, someone found Bonita and invited her back for another opening night. Richard still gets choked up talking about it.

“It was just very special,” he said.

None of Bonita’s sisters shared her streak of longevity. Her older sister Camille died in the 1950s and her other sister Thelma and her husband in the 1990s. Bonita was never one to exercise or follow any strict diet, Richard said. And she even liked to drink quite a bit, especially a Bloody Mary at lunch, which she still enjoys on occasion. ER