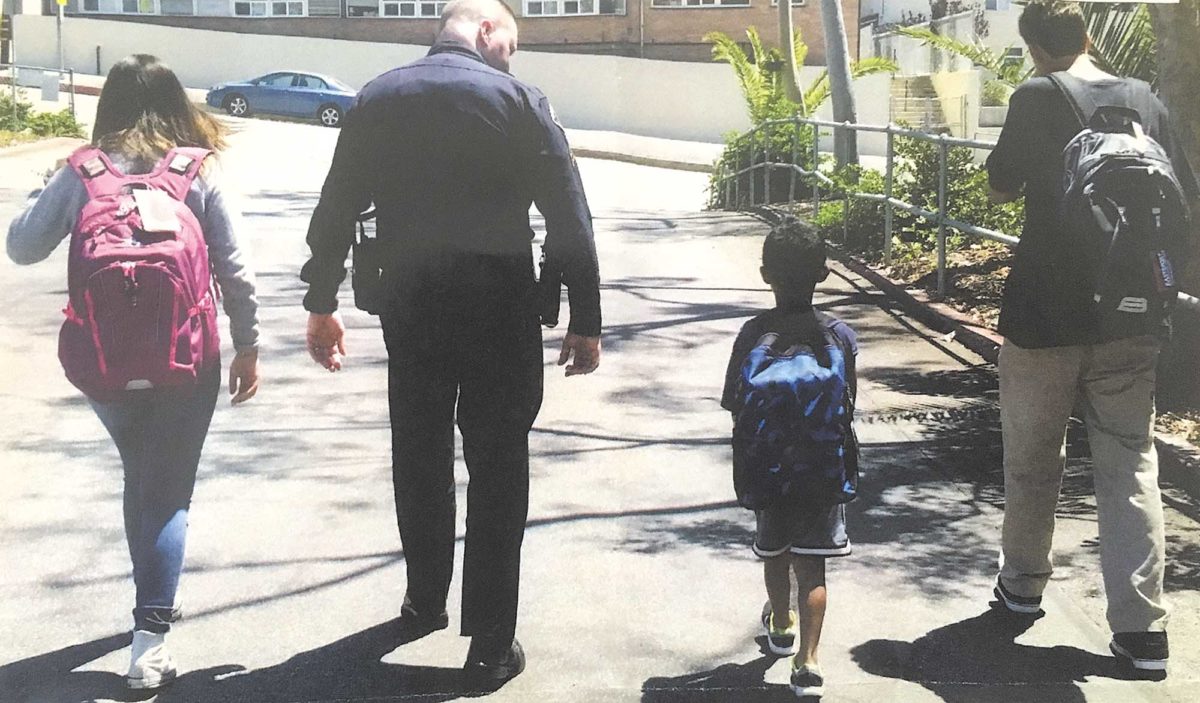 Redondo Beach police are a regular presence at Redondo Union High School, where School Resource Officers patrol the grounds with the aim of providing support to the school both as law enforcement and as a positive influence to Redondo students. Now, a partnership between the police department and the school district hopes to spread that influence across the city’s 11 K-12 campuses.

Last week, the Redondo Beach Unified School District’s Board of Education approved their part of a two-year agreement with the City of Redondo Beach to essentially share the costs of a School Resource Officer’s salary. RBUSD will pay $100,000 annually to the City as compensation for RBPD’s agreement to employ one SRO who will be specifically dedicated to RUHS — essentially, little more than half of the officer’s annual salary. The City figures to pay the remaining amount of the dedicated officer’s annual salary, expected to cost $80,000 per year. A second SRO, already provided to RBUSD by the City, will then cover the school district’s remaining campuses, with a focus on the middle schools. The district will also provide an on-site office for its SRO. The Redondo Beach City Council will discuss the agreement at its Sept. 3 meeting.

“What I see now is we’ve got far more ability to cover our schools,” said Board President Brad Waller. “The importance is extra visibility — having them randomly on campus gives more security, and having them on campus more breeds familiarity with students.”

This agreement codifies a relationship between the Redondo Beach Police Department and the city’s public schools that has tacitly been in place for years. It follows a series of initiatives that include active-shooter training for students and educators, as well as the local Police Foundation’s donation of hundreds of emergency trauma kits to classrooms across the district.

“Generally, the Police Department and the School District realize the importance of a relationship with one another. It supports what we’re doing in reducing crime and creating a safe environment, engaging the community, and what better way to do that than through the schools?” said Redondo Beach Police Chief Keith Kauffman.

The project has been in the works for little more than a year, according to RBUSD Superintendent Steven Keller, who embraced the idea on the grounds of providing ever more safety at Redondo Beach’s schools.

“What we’re getting is not just a police officer, but a Redondo Beach police officer…an officer who is agile,” Keller said, borrowing a description from Kauffman. “Their first approach in most settings is a positive, communicative, relationship-forward approach.”

RBPD’s School Resource Officers put kids first, Keller said, realizing that kids are rarely “perfectly orderly and falling in line,” and accept students for who they are.

“There’s other ways to do it, probably more affordable, but it fits what we want to do and it fits under the umbrella of social-emotional well-being, and our whole-child approach,” Keller said. “I’ve come a long way—I didn’t always look at law enforcement as a potential positive,” based on his experiences in other school districts, but RBPD’s approach has earned both his and his administrators’ appreciation.

“I think in the past, when police were around, it was because something was wrong, or someone was in trouble. In fact, they’re just there for support and vigilance,” said RUHS Principal Jens Brandt, who lauded Officer LaToya Harris for her work. “Officer Harris has been great in and around campus…she’s approachable and engages students in conversation,” and is a presence at campus events, dances, and rallies—even participating in a flag football game.

Broadly, both district and police leadership believe the partnership will foster trust between the school community and local law enforcement.

“When I was growing up, I was taught that police were our friends. Our society has grown away from that, to a vast degree—maybe not Redondo Beach as much, but generally,” Waller said. “If we can recreate that trust in Redondo, I think that changes our whole culture.”