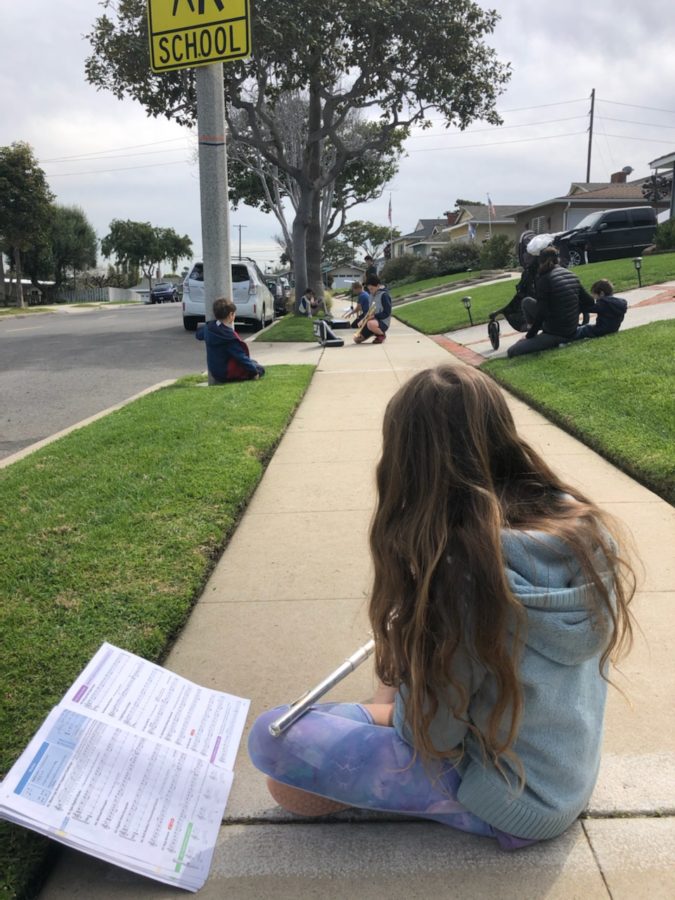 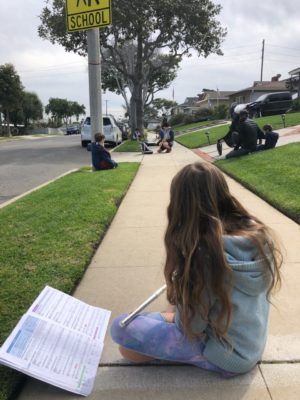 “It’s weird, being at a school site on a Monday, when there’s no professional development, or a summer or winter break, and there are no staff members and, most importantly, no kids,” Redondo schools superintendent Steven Keller said.

Last Friday, the Redondo Beach Unified School District announced it would close its campuses to students and begin online instruction at every grade level in an effort to stem the spread of disease caused by the novel coronavirus. For at least three weeks — and perhaps more, based on a statement made by California Governor Gavin Newsom — campuses will remain silent, forcing students, teachers and parents to embrace a new normal.

The decision came following “strong advice” from the Los Angeles County Office of Education, Keller said in a statement to district parents and staff. School sites were closed to students beginning Tuesday, March 17 through the scheduled spring break, April 10. All campus activities and programs, from the district’s Child Development Centers and after school programs to athletic events and high school drama performances, were also cancelled.

RBUSD was among the last of the South Bay school districts to announce closure of its campuses, causing community members to pressure the district, via social media, to follow suit.

“We took our time deliberating. We wanted to make a good decision, as opposed to a rash decision,” said RBUSD School Board President Brad Waller.

One reason was school funding — districts are funded by Average Daily Attendance, or ADA. If the district chose to close schools or go online-only without being told to do so by authorities, RBUSD would potentially be at risk of being on the hook for at least three weeks of salaries, wiping out its cash reserves. “We’d be insolvent,” Waller said. “I’m not going to sign the district up for receivership.”

Once assurances were made by the state, the district moved forward.

Campuses were open Monday, from 9 a.m. to noon, for students and parents to collect personal belongings and district-issued Chromebooks. According to district staff, approximately less than 10 percent of the student or parent population came to schools to pick up their effects. Most all were already prepared for weeks of learning at home.

Which brought the district to its second concern: working families.

The district is providing breakfast and lunch for students available for pickup at Adams Elementary School each morning. And, according to Keller, the district is formulating backup plans in case they need to help families or students that can’t make it out, “even if that means we’re dropping off food on the porch from our car, we’re doing it.” On Tuesday, 234 students and families arrived to pick up meals. That number jumped up to 400 on Wednesday morning.

“The last thing I want is to see a family where a parent has to stay home, but they work on an hourly basis and can’t afford school or housing because we sent their kids home,” Waller said. “If there is an issue and we find out about it, I would advocate that the schools do something.”

“In my head, and in the board’s head, we’re aware that we have a larger percentage of these parents than people realize — people who don’t have the ability to be at home with their second and third graders, who have to work to pay the rent and pay for the car and so on,” Keller said. “Just as I got letters and calls saying ‘why haven’t you closed?’ I got just as many letters saying ‘what am I going to do with my kid?’ and…it just breaks my heart.” 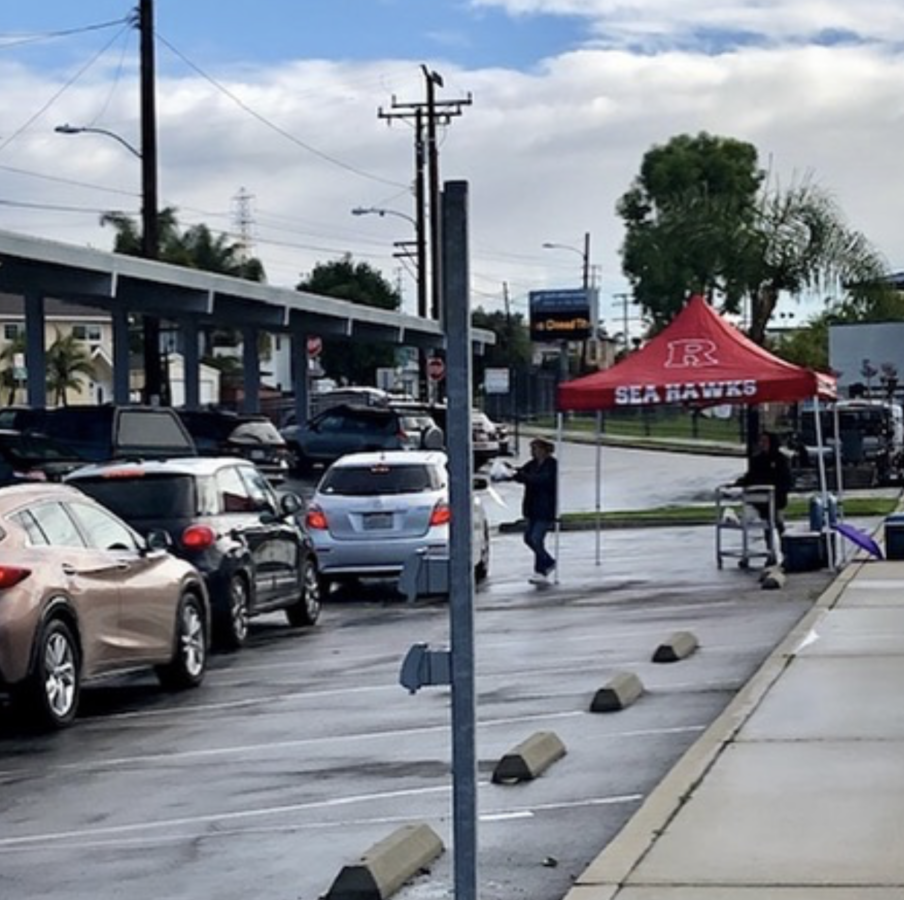 Redondo Beach parents and students line up their cars in the rain to receive meals from the school district on Tuesday morning. Instagram photo via @redondobeachusd

Bridget Sheehey, a parent to three children attending Tulita Elementary School, is part of a two-working-parent household. She’s a veterinarian and her husband is an attorney. They’ve been able to split time working from home and going into work when necessary.

“It’s different. You can’t do your job in the same way as you could before. With me, we’re doing a lot of talking by phone; my husband is trying to do conference calls while locked away in the bedroom. Trying to manage a work-life balance takes on a whole new meaning,” Sheehey said.

Another difficulty, she acknowledges, is that parents aren’t trained educators, adding new stress  while also maintaining productivity at their job.

But she does feel supported by the school, which has kept in regular contact with families, and the curriculum sent out to parents.

The district’s education plan for the next few weeks is, in part, to maintain what students have learned this school year, said Susan Wildes, RBUSD’s Executive Director of Educational Services.

“We’re not pushing out new material and new content to students — we want to make sure that’s delivered in school, with teachers,” Wildes said, putting the primary focus on retention.

The district, she said, is also sending kids and parents other activities in keeping with its mission to “educate the whole child,” including physical activities and mindfulness exercises. “We want to be mindful of the anxiety levels of students and families…with different ways to practice bringing down anxiety.”

The district plans on making full use of its one-to-one student to device ratio meaning that each student has a district-issued tablet or computer. RBUSD teachers will be available for students and parents throughout the school week, providing daily communication and holding virtual office hours each day. To do so, the district is making use of its Google Classroom suite, including Google Hangouts, a program that allows one-to-one video calls and group video conferencing.

“It’s a learning experience. Just like the rest of the country, it happened so fast,” said Michael Henges, a Redondo Union High School government and economics teacher, and 2019 California Teacher of the Year. “It’s kind of amazing — the district rolled out a number of guidelines over the weekend and has been trying to explain how everything is going to work…but by the time we met yesterday, as a staff, it’s as if this had been in the plans the whole year.”

Henges often uses a “flipped learning” method in the classroom, asking students to learn new material at home through video clips or reading, then come back to class to apply the information in different ways.

“In the past, teachers may have had those sprinkled into the curriculum — now this is the primary curriculum. We’re trying to think through what will make sense for students and how we can make the rest of this school year a meaningful experience.”

Teachers know that this isn’t a perfect process, and that it’s going to be rocky. Henges is especially curious to see how students react to the evolving situation.

“Based on what the district had to work with, and what our teachers have to work with, it’s been pretty amazing so far,” Henges said.

The district and its teachers may have to continue being agile. During a news conference on Tuesday, Governor Gavin Newsom predicted that schools were unlikely to open until the summer.

“We’re not changing anything for now, but we’re aware that there could be changes by the state,” Keller said. “The positive is that we couldn’t be better situated in the delivery of this instruction and this curriculum. Whether we’re reviewing existing learning or moving forward with new learning, we are ready and we will be ready.”

The sounds of the school yards are like comfort food to Keller, and that activity of kids just being kids helps to normalize communities in difficult times. Having empty schools, he said, is surreal.

On Wednesday, parents and students along Redondo’s Avenue E took to their streets and sidewalks, in their own attempt to keep things normal. Pulling inspiration from a viral video of Italian men and women playing music together while under a quarantine lockdown, Tulita band students held their own small band practice. Using the most recent winter concert program as a set list, students played and practiced their instruments together — while maintaining “social distancing” guidelines, playing music a few feet away from one another.

“It ended up where a mom was walking around with a toddler, neighbors coming out to listen, and it gave the kids and us moms something to look forward to,” said parent and Tulita librarian Ali Daly.