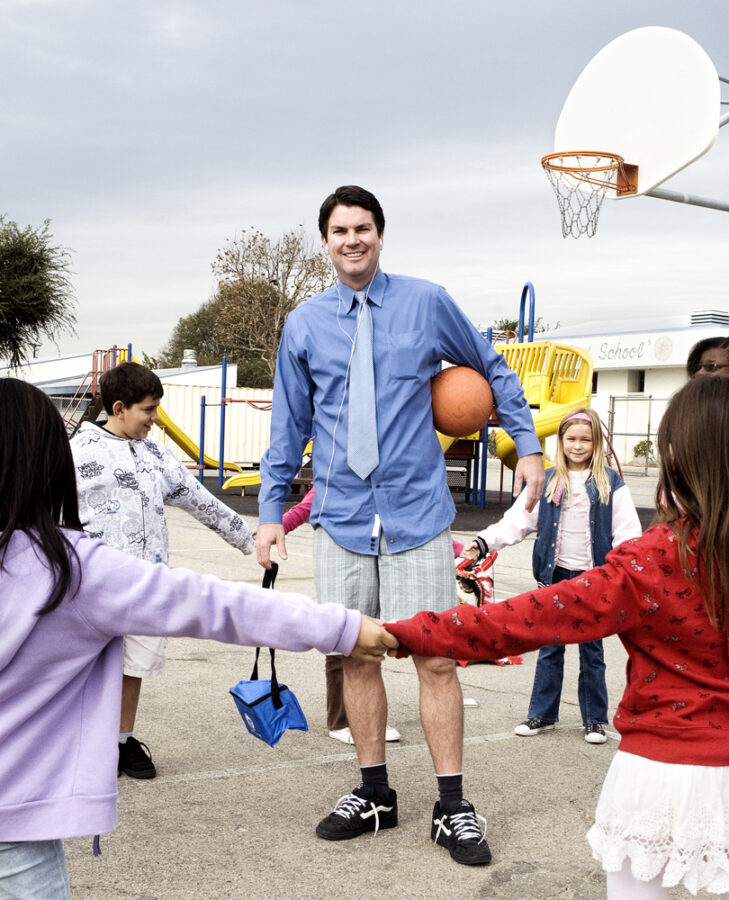 Retiring has never been a word that much applied to Steven Keller.

Keller was appointed as the Redondo Beach Unified School District’s superintendent in 2006, and came bounding into the community with a youthful zeal so unlike previous local education leaders that it represented not so much a changing of the guard as a complete departure from what people liked to call “Old Redondo” at the time.

Tall and dapper, with a dimple on his chin, Keller possessed an easy but goofy charisma, a cross between movie stars Cary Grant and Jim Carrey. He was unabashedly ambitious, something that led to mixed results early on, such as when his proposed school bond measure intended to modernize RBUSD’s dilapidated campuses met a 0-5 vote from the very school board who’d appointed him. He foisted “Good to Great” banners across the district and made a book of the same name required reading among district leaders and teachers.

Somewhere along the way, Keller’s vision came to fruition. A before and after picture of RBUSD from 2006 to today reveals a district transformed —  physically, by a $145 million bond measure that Keller eventually marshaled (with a 5-0 vote, thank you very much), and academically, with soaring test scores that made RBUSD competitive with of its high-achieving neighbors while still offering a more ethnically and socioeconomically diverse, and arguably more “real world” learning experience for its student body.

“He has been fantastic for this district,” said David Witken, RBUSD school board president. “I think his biggest accomplishment was making RBUSD a destination district, where people moved to attend our schools. That wasn’t ∂he case before he arrived. So we owe him a lot. I think his retirement is well earned.”

Keller, who is 58, announced his retirement last Friday morning. Fittingly, for a superintendent who prides himself on personally interviewing every employee the district hires, Keller shared the news first with RBUSD staff in a morning email.

“I hope the start of the school year is going well for you,” he wrote. “Please, don’t ever forget that you are the reason RBUSD shines so brightly. As many of you have heard me say, if 85 percent of a school district’s budget is consumed by people, you better have the best in the business. We do… that’s you!”

Keller, a Torrance native who attended TUSD schools, recalled his journey as an educator, which began as a 22-year-old teacher in Rancho Cucamonga in 1986, and included stops in Fullerton, Baldwin Park, and Laguna Beach, where he rose as an assistant superintendent, before taking the helm at RBUSD.

“This district and this job have meant the world to me, professionally and personally…This community has always been home to me and it still is today,” Keller wrote.  “After 36 years in public education, I will retire at the end of December. I am ready and I am excited. I will dabble with a few part-time gigs, which will keep me active, although serving as my daughter’s personal driver will be the priority.”

Keller arrived to a district in disarray in 2006. RBUSD had gone through five superintendents in the previous five years, the school board had become fractious, and the school community carried a longstanding academic inferiority complex vis-a-vis neighboring Manhattan Beach Unified School District. Keller attacked all the district’s problems head-on. He brought the board into often uncomfortable weekend team-building exercises, and he stood up to MBUSD, first over the issue of North Redondo students —  who historically were poached by MBUSD —  and perhaps more crucially by asserting RBUSD’s advantages. Keller remained a teacher at heart, and at RBUSD engaged in one-on-one tutoring and mentoring with at-risk students. One of those students, a middle schooler named Jorge, particularly embraced Keller’s guidance and started to achieve better academic results. Keller, in the presence of a reporter, could not contain his glee over Jorge’s turnaround.

“There are no Jorges in Manhattan Beach,” he said.

What he meant was less about Jorge’s ethnicity or name and more about an educational approach in which students whose test scores might not produce great data points for the district were not only welcome but embraced.

RBUSD rose. Academic performance improved, a school bond measure transformed campuses —  particularly Redondo Union High School, which had been in a state of advanced deterioration —  and more and more students came. Enrollment increased from 8,200 in 2006 to 9,650 in 2022, a timespan in which Redondo Beach itself did not significantly increase its population.

Councilperson Todd Loewenstein, who was on the school board when Keller arrived and played an instrumental role in his hire, said Keller’s leadership and transformation of RBUSD exceeded even his most hopeful expectations.

“I had a front row seat,” Loewenstein said. “And I don’t know if I could have imagined an outcome like this.”

Loewenstein said Keller made the goal of those “Good to Great” banners come true.

In an interview, Keller expressed pride in the district’s progress but stopped short of declaring the “Good to Great” mission accomplished.

“I would never say accomplished,” he said. “I would say, definitely, we have moved down the field significantly.”

When Keller lists his accomplishments at RBUSD, they include big ticket items like the school bond, and surviving the tumult of 15 different school board members —  as Loewenstein noted, the average tenure of a superintendent is less than four years —  but also include things like installing cooling systems in classrooms and establishing a yearly staff holiday party at which over $300,000 in donated gifts have been dispersed. Significantly absent from his list are test score data points. And high on that list is the increase in enrollment and a change in educational philosophy.

“It is kind of an ‘If you build it, they will come’ kind of thing,’” Keller said. “You increase enrollment at a time of statewide declining enrollment, in a community that’s —  you know, who can pay rent here? And mortgage payments are absurd. And so people are coming here, young families are finding the money to get here, which is significant.”

“And then the second piece is we said we’re about the whole child. We’re not just about kids going to Ivy League schools, and all the UCs in the state, and what have you, but really developing the whole child.”

One of the few data points Keller references is something that came about through RBUSD’s partnership with the Beach Cities Health District, which began in small steps by having students plant and tend to community gardens and learn nutrition, and eventually resulted in one of the more astonishing transformations of the literal student body as measured by Body Mass Index (BMI).

“Twelve years ago, we were at 20 percent —  one in five kids was considered obese,” Keller said. “And now we’re hovering around the 7 percent mark, even after COVID.”

The whole child philosophy is, of course, about more than a child’s weight, but the social and emotional well-being of students. It is an educational approach that has increasingly taken root nationally, but when Keller began talking about it in 2006, he was a decade ahead of the curve. This was something that stood out to Loewenstein, and also the fact that every kind of student was embraced.

“One of the things we tried to do at the beginning was to make sure that every child in the city, no matter what their background was, whether it was advantaged or disadvantaged — that they all got a great education,” Loewenstein said. “And I think we’re at that point now. I always look at it as a private school education done through public schools. These days a lot of people are pulling their kids out of public schools, and putting them in private. Yet at a time when school districts have declining enrollment and real estate prices, especially here, are really high, our school district is in demand.”

This philosophy also attracted a certain type of educator. One of the core principles of “Good to Great” was to “get the right people on the bus.” Deputy superintendent Annette Alpern was one of the first hires on Keller’s leadership team, arriving at RBUSD in 2007, after 17 years in Torrance Unified. Some colleagues at the time warned her away from RBUSD because of its ongoing tumult, and leadership instability. Keller got her attention right away, leading the first two panel interviews, not a common practice for superintendents. She was a little shocked at first, but Keller’s demeanor quickly put her at ease.

“One of the questions that they had asked was, ‘What do you know about us?’  So I talked about growing up in the South Bay, but I also lived in Redondo Beach, and I said that I had watched the board meetings on

whatever the cable TV channel was at the time. And Steven said, ‘Uh oh,’” Alpern said, laughing at the memory. “So I knew he was real.”

Keller won her over when he began talking about his advocacy for whole child education.

“I think that was where we really hit it off, because both of us are such strong believers in not just the talk of whole child education, but the action of it,” Alpern said. “I think that was the beauty of those first few years is just like leading that work, and really seeing it begin to happen.”

Keller said that interviewees are often surprised when they realize they are not just honorarily “meeting” the superintendent, but being actively and occasionally aggressively interviewed by him. Sometimes, when they are prompted to ask their own questions, they ask him why he does these interviews.

“I always say, ‘Well, why do you think I do it? And the candidate will say, ‘Well, you want to get to know everyone,’” Keller said. “I say, ‘Okay, that’s the nice side of this. But really, why do you think I do it? You’ve seen by now that you’ve sat with me for five minutes…Can you tell I am a little intense? Think of me as a bouncer at a nightclub. That’s what this is about. I want to make sure that you’re about kids. You’re going to be here every day —  unless you have COVID symptoms, now I have to say that —  and you’re not going to be late to work. You are not going to complain about the stupid things, and when you do have a complaint, you’re going to be civil about it. And you’re going to be all in for kids. And I mean all in.”

Keller cites as his most lasting legacy that the educators he will leave behind at RBUSD are all in for the kids. Witkin, the school board president, said he and his family are among those who came to Redondo Beach because of its schools. And as Witkin has gotten to know the district intimately well, what continues to amaze him are the people who work for RBUSD.

“It is the culture that he developed,” Witkin said. “I think you have high integrity people who treat the 10,000 kids in the district like they were their own children. I really do feel like the staff here, and Steven’s cabinet, and Steven himself really feel like this is a family, more than just a job, or school district.” ER