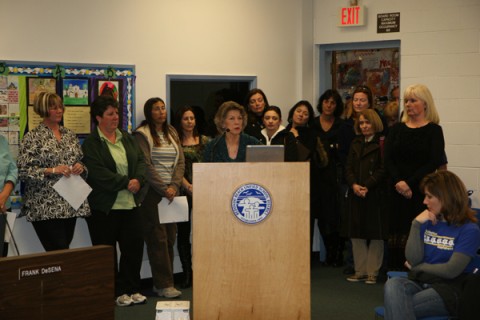 A group of teachers speak to the Board of Education Tuesday night about alternatives to proposed budget cuts.

The Redondo Beach Board of Education Tuesday night moved to lay off as as many as 24 elementary school teachers and eliminate eight other positions, including three high school teachers, a principal and an assistant principal.

In a unanimous vote, the board approved a recommendation authorizing that layoff notices be sent to teachers by March 15, the deadline required by state law for teachers who will not be rehired in the next school year. Additionally, the board also voted to lay off a school counselor and a teacher on special assignment.

“I think all of us here share a deep sense of regret as we pass this resolution,” said board president Todd Loewenstein. “I’ve said this before: my goal on this board is to save jobs. That is one thing I need to do, because I realize it impacts not just teachers and not just students, but a lot of families. And it impacts the community.”

The district, due to state funding reductions, is preparing to cut $3.6 million from its $65 million budget in the upcoming school year. After cutting more than $5 million during two rounds of state budget cuts last year, a school board that has prided itself on keeping cuts “out of the classroom” felt compelled to approve teacher layoff notices.

“What alternatives are there?” school board member Carl Clark asked at one point in the meeting.

Superintendent Steven Keller said the alternatives include contract negotiations with its employees, talks that are likely to include topics such as increased furlough days and possibly salary cuts. But ultimately, Keller said, few alternatives exist that would not impact RBUSD employees in some manner.

“Basically, I wish it was something just like turning off lights and not buying computers,” Keller said. “But when most of our business is personnel…that is where we are at. I wish I had a brilliant answer for you, but it just comes down to people.”

Assistant Superintendent Nancy Billinger said that 85 percent of the district’s budget was personnel costs, including 70 percent for teacher salaries and benefits.

“We are so limited in our options…These are horrible decisions to have to make, but when we really look at how big the number is, it’s daunting,” Billinger said.

The layoffs would save $2 million. The district had hoped to save another $1 million through an early retirement package offered to 70 teachers, although early indications are that not enough teachers accepted the incentivized offer to quite meet that target.

Elementary school teacher layoffs would likely be tied to increased class sizes. The district has prided itself on the lowest class sizes in the South Bay, with a ratio of 22.3 students for every teacher at the kindergarten through third grade level this year.

Jefferson Elementary kindergartner teacher Emily Butler, who identified herself as one of the teachers slated for layoff, asked the board to do whatever possible to protect class sizes. She said even a single year of increased class sizes could have a drastic impact on student learning.

“I know as an adult, when I’m doing the family budget, one year starts to feel like the next,” she said. “But to a five-year-old, every year matters so much…Please, impact the class sizes as little as possible.”

Tanya Ross, the parent of one of Ms. Butler’s kindergartners, said that she has three more kids who will be kindergartners in successive years. She said increased class sizes would not only cause more children to struggle but would also hurt the district’s overall academic achievement.

Redondo Union High School teacher Tim Baumgartner argued that the district does have an alternative – tapping into its reserves. The state has temporarily loosened its requirement that each district maintain a three percent economic uncertainty reserve and allowed – for the next two years, anyway – as little as a 1.5 percent reserve. Baumgartner noted the district’s reserve is currently at 3.8 percent, or $2.9 million.

“We have stated many times in board meetings that reserves are for hard times, and we are there,” Baumgartner said. “Spend down, and spend down now! There is money in the reserve to protect not having any furlough days.”

Board members have in the past expressed reluctance to dip below three percent, arguing it would risk the district’s overall solvency. But Tuesday night they focused more squarely on the difficult decision directly at hand, approving layoff notices. Board member Jane Diehl said that the board has essentially been making cuts since 2003, and while other employees have been laid off – including administrators and classified employees – this was the first time the district had considered such a large number of teacher layoffs. Last year, eight notices were issued, but only one teacher ended up losing a job. Diehl said few other options remain.

“Because we’ve been doing this now for six years,” Diehl said. “We’ve been cutting and cutting.”

The state will not officially adopt its budget until June, at the earliest, and so there are still uncertainties regarding school funding. District officials are looking for other alternatives or sources of revenue, including a fundraising drive the Redondo Beach Education Foundation that is asking the parents of every child in district to contribute $360. If that were to happen, the district’s budget problem would be solved this year.

Billinger said that some of the cuts would almost certainly be implemented, including administrative layoffs. She said at some teacher layoffs – particularly at the elementary level – could possibly still be avoided.

“We have to disrupt all these lives to give us more time to figure this out,” she said. “…It just gives us a little bit of room to make some of those decisions.”

Loewenstein, addressing the many teachers and parents in attendance, said the board would do what it could to protect employees and class sizes.

“I can’t guarantee you anything,” he said. “But I don’t want anyone here to lose hope.” ER

One Response to RBUSD moves to lay off 24 teachers