Real and replica at the Getty Villa 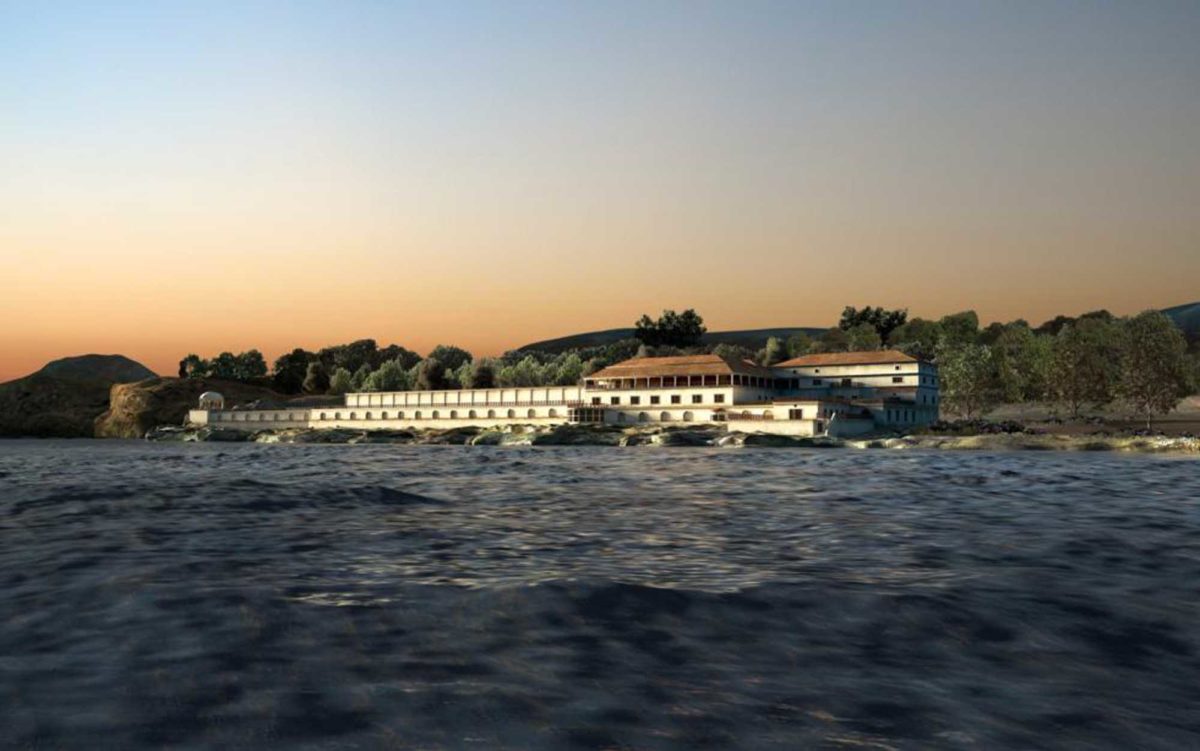 Digital reconstruction of the Villa dei Papiri: view of the terracing of the Villa from the south. Courtesy of Museo Archeologico Virtuale di Ercolano

Digital reconstruction of the Villa dei Papiri: view of the terracing of the Villa from the south. Courtesy of Museo Archeologico Virtuale di Ercolano

Back to the beginning

Few of us will have the experience of digging a well in our backyard which leads to the unearthing of an entire seaside estate. But that’s sort of what happened in 1750 when well diggers were stopped by an exquisite marble floor. What if they’d been ten feet off? Would the Villa dei Papiri still be asleep deep underground? 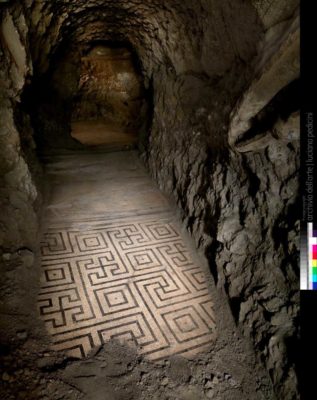 Probably not, but history goes one way and speculation goes another. Buried in 79 AD when Vesuvius emptied its giant belly and submerged a handful of coastal towns lining the Bay of Naples, most famously including Pompeii, the Villa dei Papiri in Herculaneum lay undisturbed for centuries beneath 75 feet of volcanic debris, debris much closer to rock than topsoil.

We would have scant or certainly scantier knowledge about Herculaneum if J. Paul Getty hadn’t become intrigued with the accounts of its beachfront villa and then (based on Karl Weber’s plan; see below) decided to build a replica of it to house his growing collection of Greek and Roman antiquities.

If you could go back in time and mention “Villa dei Papiri” to the inhabitants of the site, they’d scratch their heads and look at you funny. For all we know, they might have called their residence “the Getty Villa,” if they’d called it anything at all. We call it what we call it today only because of the discovery of papyrus scrolls, found there in 1752. We’ll return to them in a moment.

The villa was built around 40 BC by Lucius Calpurnius Piso Caesoninus, a Fox Searchlight Pictures studio executive, or at least the Roman aristocratic equivalent of one, presumably, but also the father-in-law of Julius Caesar. Money and prestige, in other words. His son, Piso Pontifex, seems to have been a power broker as well. You certainly don’t end up with 90 marble and bronze sculptures and a coastal retreat by working at the local Walmart. But their loss has been our gain. 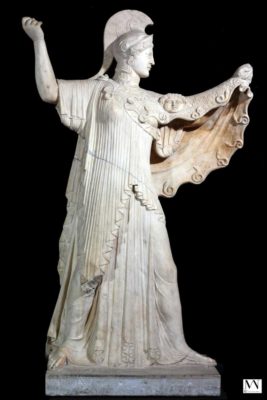 As Christopher H. Hallett writes in the catalogue for “Buried by Vesuvius: The Villa dei Papiri at Herculaneum,” an exhibition that’s on view at the Getty Villa through October, “The Villa dei Papiri was built and adorned over at least two generations, during the lifetimes of some of the most colorful characters in all of Roman history: Caesar, Cato the Younger, Cicero, Atticus, Varro, Hortensius, Brutus, Cassius, and Augustus.”

It also served as something of a getaway from the pressing concerns of urban life, a sanctuary of sorts where one could indulge the senses as well as the mind. For example, as Hallett notes, the “sculptural furnishings gave the Villa the air of a blessed place, inhabited by gods. The luxurious materials, the running water, the trees and other plantings, all combined to produce a distinctive blend of sensory delights for the owner and his guests. But the presence of so many divinities and mythical beings elevated these pleasures into a lively celebration of the blessings of the natural world.”

This brings us to the library, which didn’t contain books (Gutenberg having yet to be born) but rather tightly wrapped scrolls. The estimate today is 1,100, but also categorized as 1,837 fragments. Fragments of books? Here’s why:

When found, they weren’t simply sitting on shelves, waiting to be taken down, the dust blown off and then read. Instead, they were carbonized to the point where initially they were thought to be charred logs, ancient bolts of cloth, or even fishing nets. Some were probably discarded or used as torches, until one was dropped, broke open, and letters could be seen. Early attempts to unravel them often ended in their utter destruction. Eventually there was some success with the creation of a papyrus unrolling machine devised by Father Antonio Piaggio around 1756. To say it was laboriously slow is an understatement. As noted by German antiquarian Johann Joachim Winckelmann, “In four or five hours of work, no more than a finger’s breadth at most can be lined and loosened, and it takes an entire month to complete a full palm’s width.” In short, grass grows faster. 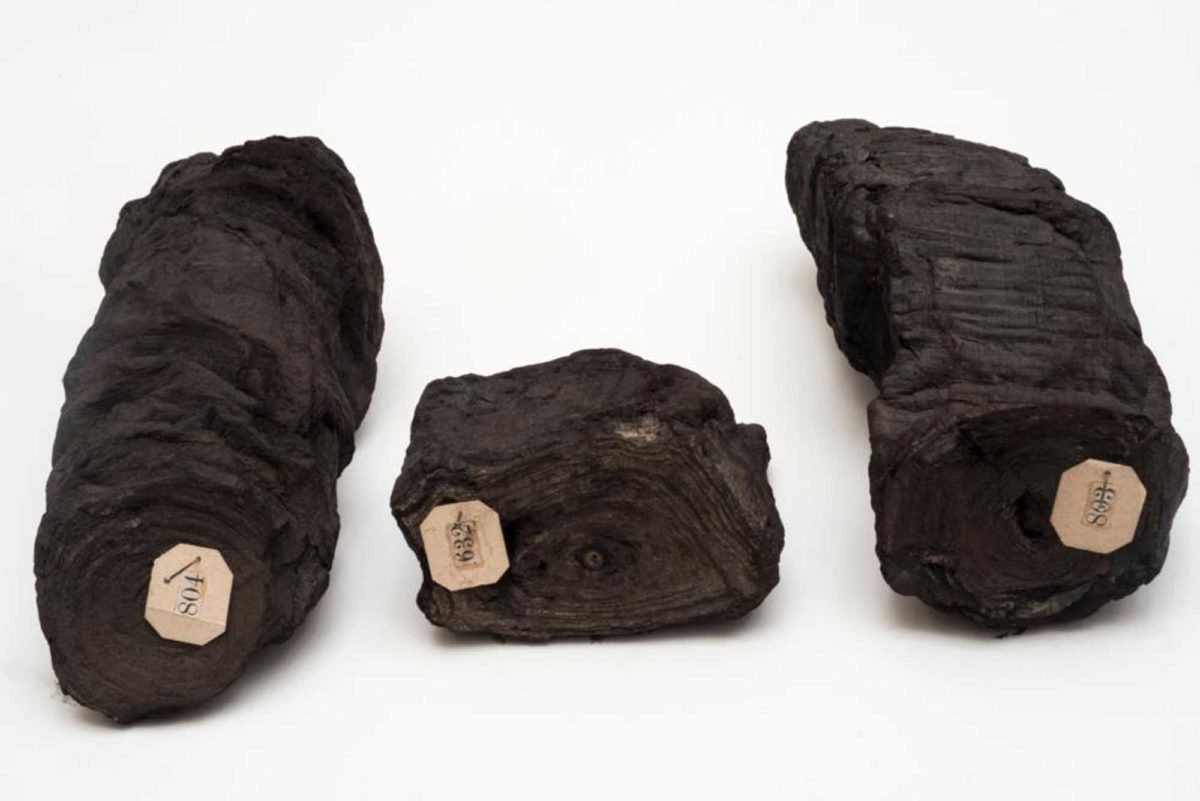 A replica of the device is on view. Presently, “Hundreds of unopened papyri survive with their valuable secrets wound tightly inside,” explains W. Brent Seales and Christy Chapman. Will they ever be opened? With recently developed non-invasive techniques it’s possible that within ten years “virtual unwrapping” will enable access to the scrolls’ contents. There’s a video explaining this in the same gallery containing Father Piaggio’s contraption and a much fuller essay in the show’s catalogue. 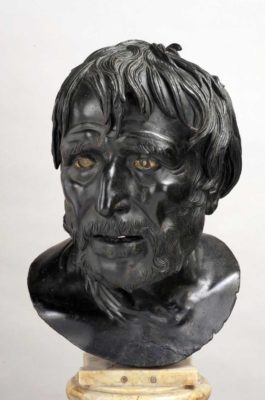 Since many scrolls have been unraveled and read, what was found? Early editions of “To the Lighthouse” and “For Whom the Bell Tolls”? As it has turned out, the library was closer to a working library than a trove of what we would now call “the Classics.” Scholars had been hoping for lost Greek and Roman plays, but most of the scrolls contain the writings of the Hellenistic Epicurean poet and philosopher Philodemus of Gadara. As for Epicurus, who lived from 341 to 270 BC, he was an Athenian who founded a school called the Garden, and what was promoted was a life of moderation rather than one of excess. In other words, not Stoicism and not Hedonism: Rather than teetotalism, drink two beers instead of four. That sort of thing.

There are several bronze busts of Epicurus and his cohorts on display discovered in or near the library.

On the subject of libraries, Athena (or Minerva) was the goddess of Wisdom, and she was also the patroness of libraries. A marble sculpture of her was unearthed along with the others. And, as Hallett sees it, this full-scale Athena “is undoubtedly the most important work of sculpture at the Villa.”

I won’t argue with that assessment, but some may say she now has strong competition since the discovery and excavation in 1997of a slightly larger-than-life Peplophoros (a scholarly way of saying “a woman wearing a peplos,” which looks somewhat like a negligee). But she’s probably something more than a housekeeper or nanny, and likely to be a depiction of Hera or Demeter. 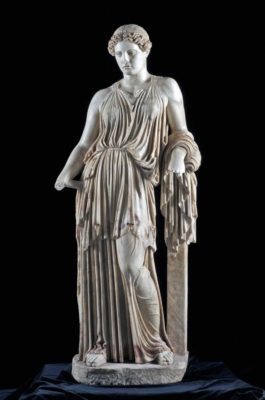 Despite not having hands, from certain angles this sculpture, this woman, is beyond lovely. She is so beautiful, in fact, that I can almost imagine myself crouching down at the base in front of her, weeping at her feet, and suddenly, as in Gérôme’s 1890 painting, the marble foot where I have inadvertently placed my hand begins to feel warm, the marbleized flesh somehow softer. That’s right, like Pygmalion and Galatea. I’ll just need to hope that she’s Demeter rather than Hera, since Hera is not only a shrew but who wants to doublecross Zeus? But if she’s Demeter then I’d be in the clear and our first stop would be Ross Dress for Less.

On the other side of the coin is “Pan and a She-Goat,” portrayed in flagrante delicto, so to speak, which is exquisitely carved but at the same time brings up the question (and not for the first time): How does subject matter influence our acceptance or rejection of art? Works like this often don’t survive the centuries, in particular the prudish ones.

Easier on the eyes is a small sculpture of a prancing piglet, which has more significance when mulled over than it does at first glance. Think back to your high school years, during that first week or two of summer vacation when you didn’t have a care in the world. The moral is this: We are piglets today, pork tomorrow. Carpe diem, etc., etc. The work is placed near a portable sundial in the shape of a ham or prosciutto. Sort of like an early Roman version of a wristwatch.

Pan and a She-Goat, Roman, first century AD; marble (from Carrara) and pigment. Found in the southeastern part of the rectangular peristyle, March 1, 1752. Photo by Jon Wyszpolski

Back then, there weren’t any Led Zeppelin or “Endless Summer” posters to hang on the walls, which in retrospect was a good thing because Vesuvius would have incinerated them whereas many of the wall frescoes (and not just in Herculaneum but in Pompeii and Stabiae) seem to have come through all right, if often fragmentary. Some of the coloring has altered, due to the excessive heat, but what remains often tells us a great deal about the tastes and proclivities of the residents. There’s one fresco on view with tipped-over silver vessels that indicates “the potential for sophisticated dining to tip into Bacchic revelry.”

For a further elaboration in that vein one should study the garden statuary, including such works as the “Drunken Satyr.” This piece is one of the many that stands (or reclines) replicated in the Getty Villa’s Outer Peristyle Garden. These many works, artfully placed, encourage the visitor, now as it did then, to stroll about leisurely, to relax and to unwind or to ponder and philosophize. And the cool thing is, if I haven’t alluded to it already, is that this is the only exhibit of this kind where the visitor can see the ancient originals on display and then step outdoors to experience a life-like recreation of their original setting. Here, in “Buried by Vesuvius,” we not only can relish specific, detailed information about a unique private residence destroyed/preserved nearly two centuries ago, we can also imbibe a sense of place to go along with it. Allowing for various liberties and inexact details, of course. 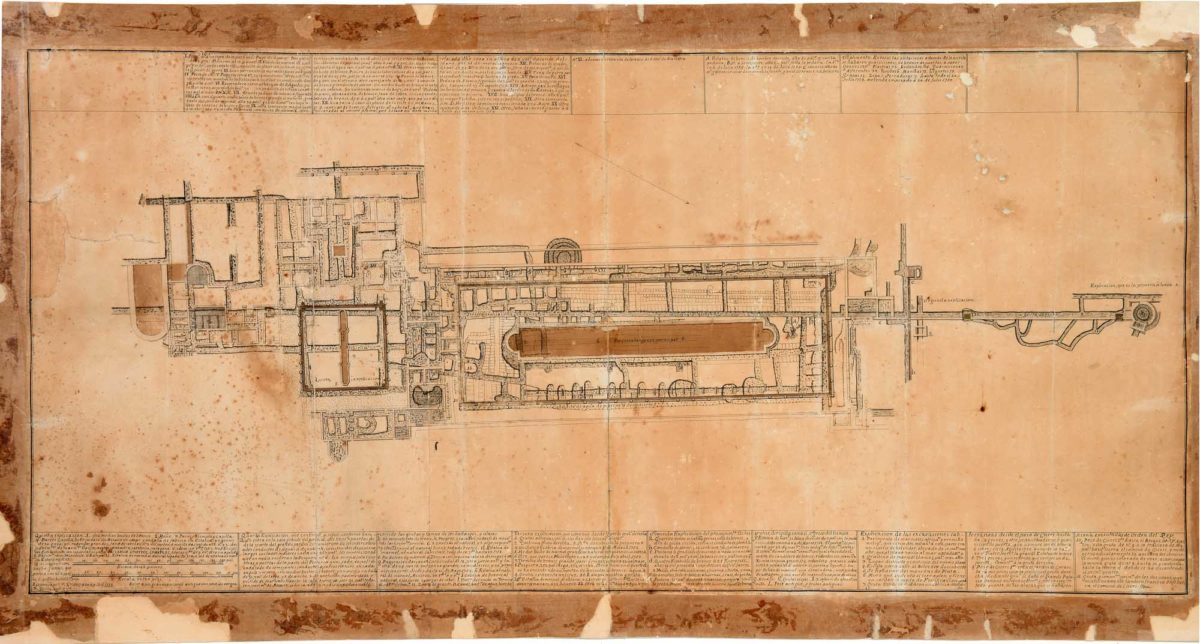 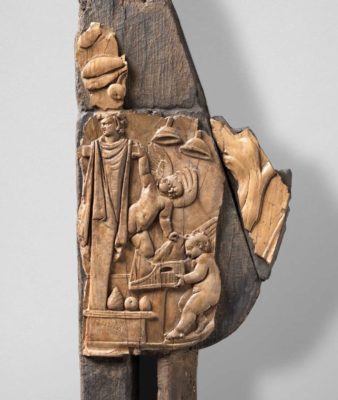 Archeology is kind of like reverse architecture, but in this case much is owed to Karl Weber, who was in charge of convicts and conscripts who dug mine-like shafts through the remains of the Villa dei Papiri. Weber didn’t have to, but he meticulously recorded the findspots, what was found, where and when, and it was his detailed map, or excavation plan, from 1754-58 that eventually provided J. Paul Getty’s architects with a preliminary blueprint for his own villa. So it was Weber who could be considered the true hero in all this. His patient work and supervision has also culminated in some remarkable digital reconstructions of the original villa, which are on view in the exhibition and in the catalogue. What’s hard to fathom, though, is that very little of the site has been fully uncovered. Most of it still lies buried under that 75 feet of volcanic debris mentioned earlier. And, considering what was found in the 1990s and 2000s (including pieces of ivory-veneered wooden furniture with skillful carvings), we could still be in for a few more surprises.

Before we go, mention should be made of Kenneth Lapatin, curator of antiquities at the J. Paul Getty Museum, for shepherding this exhibition through all the mazes and around all the hurdles that major shows inevitably encounter. If you were able to catch “Last Days of Pompeii: Decadence, Apocalypse, Resurrection” (2012) or “Power and Pathos: Bronze Sculpture of the Hellenistic World” (2015), then you know that his contributions have been invaluable on so many different levels.

So try not to miss this one. Chances are you’ll never see anything quite like it again.

Buried by Vesuvius: The Villa dei Papiri at Herculaneum is on view through Oct. 28 at the Getty Villa, 17985 Pacific Coast Hwy, Pacific Palisades. Hours, Wednesday through Monday from 10 a.m. to 5 p.m. Closed Tuesdays. Free, but reservations required. Parking, $15. The exhibition catalogue, although not an easy one to breeze through, contains numerous essays by scholars and specialists in their field. Like the show itself, it’ll take you back to a remarkable moment in history. (310) 440-7300 or visit getty.edu. ER