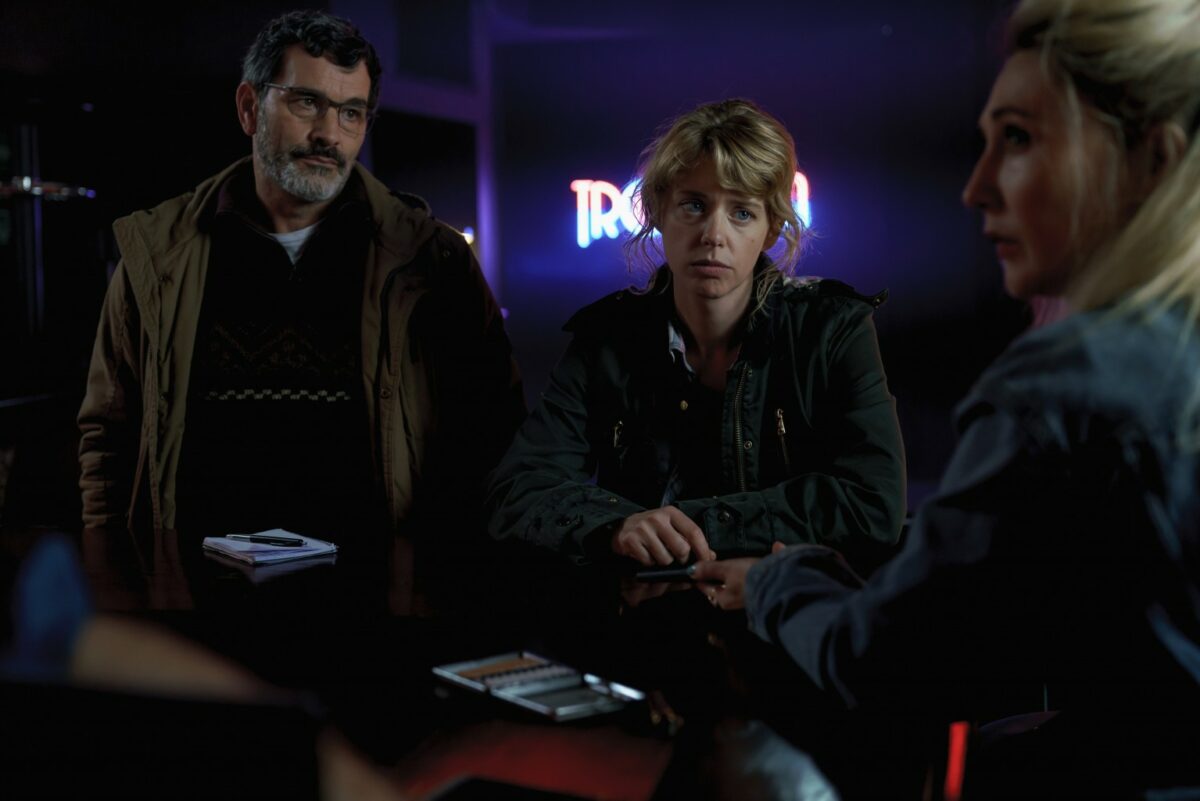 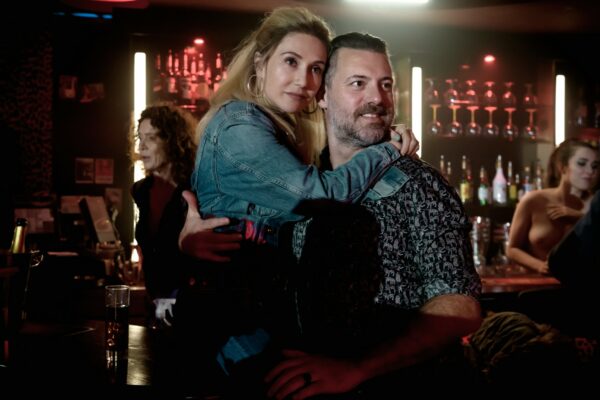 Based on an idea by Carice van Houten, Halina Reijn, and Frank Ketelaar, “Red Light” explores the seamy side of legal prostitution in Antwerp and Amsterdam that relies on an illegal network of human trafficking. What sets this dark series apart is the way “Red Light” explores the topic through the prism of three women who are, in one way or another, collateral damage of this trade in ways tangential and direct.

Sylvia is both a madam and a whore, seemingly in charge of her girls but under the thumb of the vicious pimp who controls her, sexually and psychologically. Ingmar (the pimp) is her lover, her boss, and her abuser pulling her in and out like a cat toying with a bird, wounding but never killing. Her clientele is loyal and varied, from the hulk who likes to be dominated to the upscale professor, Eric Savinije, who declares his undying love. When the professor goes missing, an avalanche of ramifications pour down.

Eric, who teaches in Antwerp, is the husband of Esther Vinkel, a famous opera singer in Amsterdam. Sheltered, immature, and naive, she has always depended on the kindness and protection of others. When, upon the heart attack and death of her beloved father, she is unable to reach Eric, she panics and reports him missing to the Antwerp police. 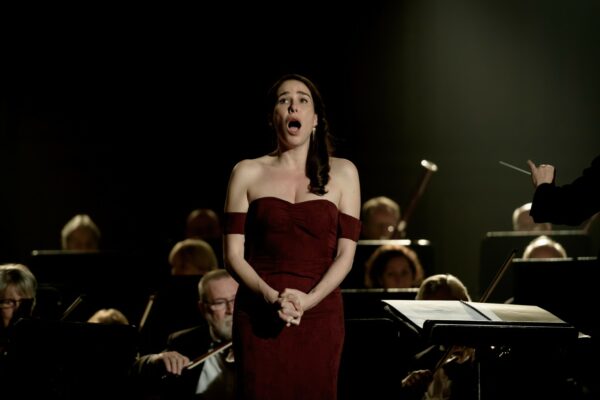 Skeptical that Eric is the victim of foul play, the two detectives assigned to the case in Antwerp, Evi Vercruyssen and Sam De Man, make perfunctory inquiries. Esther, unhinged and without either her husband or father to anchor her, leaves for Antwerp to try tracking him down after finding an unfinished letter indicating that he was going to leave her. She has also found disturbing images on his computer seeming to indicate that he was having an affair with one of his students. Unable to concentrate, she is also unable to perform and in a flash she has torpedoed what was a very promising career.

Eventually, all roads lead to Sylvia’s brothel, also the source of a major investigation into human trafficking. Young women, recruited from the Eastern Bloc, have gone missing and the professor who  may or may not have disappeared is a distraction. But soon his body is found in the river, so now there is a probable murder. Clues begin to surface that he was last seen at Sylvia’s. Denial is the order of the day for Esther, Ingmar, and mostly Sylvia.

The characters are all very complex. Sylvia is every woman in a violent co-dependent situation. She both loves and hates her abuser, Ingmar, but cannot leave even when it’s apparent that his lies and fists should send her running to the police. Ingmar is the focus and lead suspect in the human sex trafficking operation and Sylvia would be their best way in, but her reliance on Ingmar keeps her yo-yoing back and forth between her self-protection and his self-interest. He has cleverly put all illegal assets in her name so when he goes down, she goes down. 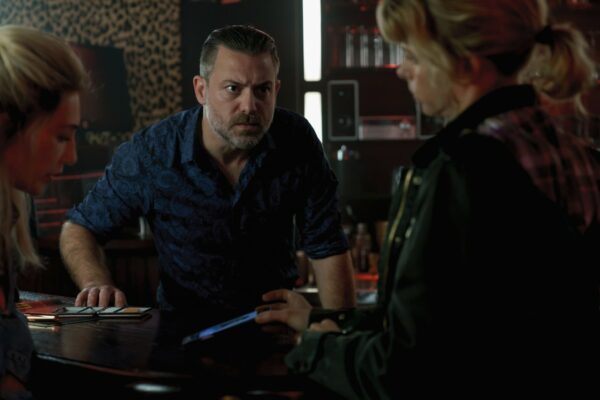 The multi-layered complexities of motherhood infuse the story line with more questions to explore. Esther desperately wanted a baby by Eric but a legal issue prevents her from using the sperm that they had banked for possible IVF. Sylvia, on the other hand, finds herself pregnant and is in the wilderness of choice, believing it is one way to hold on to Ingmar who wants it aborted. Evi, on the other hand, is the mother of two children and her lack of maternal instinct and feeling is ripping apart her marriage to Gust, her childhood sweetheart. Gust, a loving and caring father, has a hard time understanding his wife’s weaknesses (alcohol), ambivalence (motherhood), and obsession (work).

Perhaps the larger issue explored is the nature of love, whether self-destructive (Sylvia), blind (Esther), or the inability to engage (Evi). Not to ignore the men in all this, Ingmar is very enigmatic in his manifestation of control and feeling for Sylvia. Gust, who loves his children and wife deeply, cannot conceive of a situation where Evi doesn’t feel the same way he does. And even Sam has issues. Where Evi would never consider taking time off for family, Sam is devoted to his wife who has end stage MS. Love, in its many permutations, is hidden in plain sight. 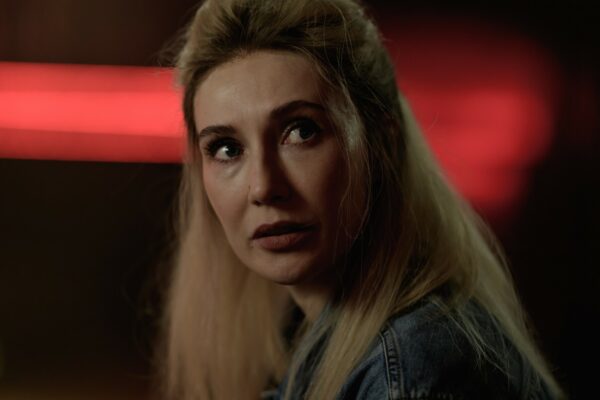 Told over ten episodes, the series stretches itself a bit thin. Eight would have been tighter and more effective. Nevertheless, the production values are excellent. Written with edge and directed effectively by Anke Blondé and Wouter Bovijn from both the story and acting standpoints, “Red Light” is a bingeable program that adds insight to the human condition and the baser elements of its nature. The acting is particularly compelling.

Gert Van Rampelberg as Ingmar is that difficult to achieve combination of evil, dangerous, vulnerable, and confused. He is one of the true villains in a piece full of questionable characters. Koen De Bouw infuses his character, Sam, with love, understanding, compassion, and depth but something important that is hidden around the edges will end up surprising you. But mainly this is about the women and the journey we take when we follow Esther’s quixotic and futile path down what is definitely not the yellow brick road. The wizard is a pimp and Oz is that titular “Red Light” district. There is definitely no place like home because, in the end, there is no home.

Maaike Neuville’s Evi is a mass of contradictions. Incredibly youthful and beautiful, Evi leaves a path of domestic destruction behind her that is unique because she approaches a live-work balance that is most often seen in men. Maintaining a modicum of sympathy despite her lack of empathy is tricky but Neuville finds a way.

Most intriguing are the actresses who play Esther and Sylvia, respectively Halina Reijn and Carice van Houten, who also created the series. Reijn has the more difficult role in portraying a child-woman discovering hard truths about both her husband and father as she approaches middle age. Her growth from annoying wide-eyed innocence to hard edged survivor mode is only partially successful. It was, perhaps, too long and difficult a road to follow.

Van Houten is highly effective as the conflicted and duplicitous Sylvia who almost always disappoints. Like the yo-yo ride she’s on, she pulls us into the dizzying back and forth with her. She always allows her character, and therefore us as well, just enough rope to pull around her neck and tighten until she, and we, gasp for breath. Her performance is one of the primary reasons to watch this series.

In Dutch with English subtitles.