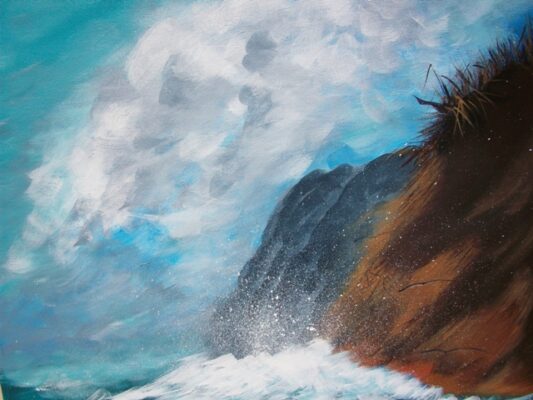 “The show was the idea of Barbara ramsey-Duke,” says Jianulla Zimmerman. “She’s an artist, and she wanted to do something that would bring art into the church.”

Zimmerman, a Redondo Beach resident who’s also an artist, is referring to “Collections… Art from the Heart,” a group exhibition that opens tomorrow (reception, 6 to 9 p.m.) and then runs through Sunday at Christ Episcopal Church.

“After Barbara proposed having the show,” Zimmerman continues, “her husband became ill. This was his third bout with lung cancer. She said that it would be a help to her, a little bit of a distraction, even, to know that she had this job of putting this show together while taking care of her husband.”

However, Stephen Duke passed away on August 26, and his memorial service took place yesterday, Sept. 5.

Strangely enough, if not for a damaging fire the church might not have chosen to hang art this weekend.

“We have a new church hall as a result of the fire,” Zimmerman says. “The church hall is so lovely, especially in comparison to the old one. Father Bob was very supportive, and this was also an idea that he wanted to develop – to use our new, beautiful parish hall to show art, and to bring art into our church and into our community.” 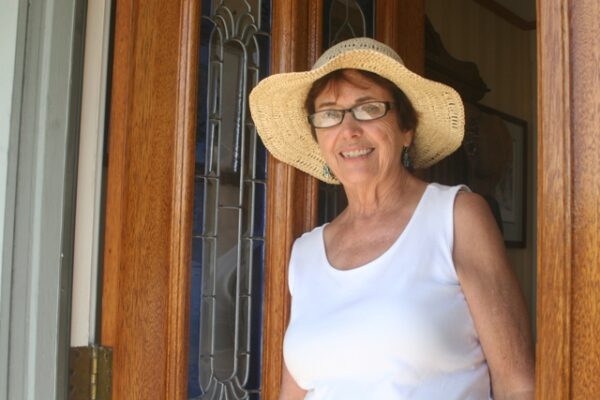 No demons; no devils

Who chose the art? Or did you simply ask various artists to submit their work?

“The committee decided that we would be the judge of who was accepted into the show and who wasn’t. But then, as time went on, we decided that anyone who wanted to be in the show [just] had to fill out the paperwork and show us some of their art.”

And then you would select from that?

“No,” says Zimmerman, “it’s up to the artists to bring what they feel is their best work.”

What would have happened if someone had turned in something that you didn’t like?

“Well, if that would have happened we would have said something. We didn’t have to do that. There were no dirty pictures or anything improper.”

Since the show is in a church perhaps there are more restrictions than there might have been otherwise, regarding what you can put on view?

No one turned in pictures of demons or devils?

“Right.” Zimmerman pauses. “I suppose we could have a picture of the Devil in the show, but we don’t.”

It all comes together

About half of the artists in “Collections” attend Zimmerman’s church. Altogether, there are 21 artists participating.

And how many pieces are in the show overall?

“I have no idea,” Zimmerman says, and then laughs.

She laughs again. “Give or take…”

As for how Zimmerman herself became interested in art:

“I went to Immaculate Heart College when Sister Corita Kent was there,” she says. “At the time I was not an art major, but her message was social conscience. At that time – we were in Vietnam – it was to end the war.” Sister Corita Kent created large screen prints, or serigraphs.

So she was an inspiration for you to take up art? How long ago was that?

Zimmerman responds with a laugh. “A long time ago.” And then, “Fifty years ago… just had my birthday yesterday.”

Then you just turned 32, right?

Zimmerman is well connected to the local art scene:

“I belong to the Redondo Beach Art Group and to the Torrance Art Group; to the South Bay Watercolor Society, and to the Palos Verdes Art Center.”

As for her art, she says, “I work in watercolor, collage, acrylic, and I paint images from dreams, often with a spiritual content. Usually about people and issues that are important to me.”

I guess that’s it, the visiting journalist says; unless you have one more thing you care to add. Here’s your chance.

“This is my last chance!” Zimmerman replies with a laugh. Then she sums it all up for me.

“One of the reasons for [this show] is to share our new, beautiful parish hall with our neighbors, and to bring more art into everybody’s lives, ours and other people’s.”

Collections… Art from the Heart opens with a reception tomorrow (Friday) from 6 to 9 p.m., and continues on Saturday, from 12 noon to 5 p.m., and on Sunday, from 12 noon to 4 p.m., at Christ Episcopal Church, 408 S. Broadway, Redondo Beach. At the opening, light refreshments will be served and most of the artists will be present.