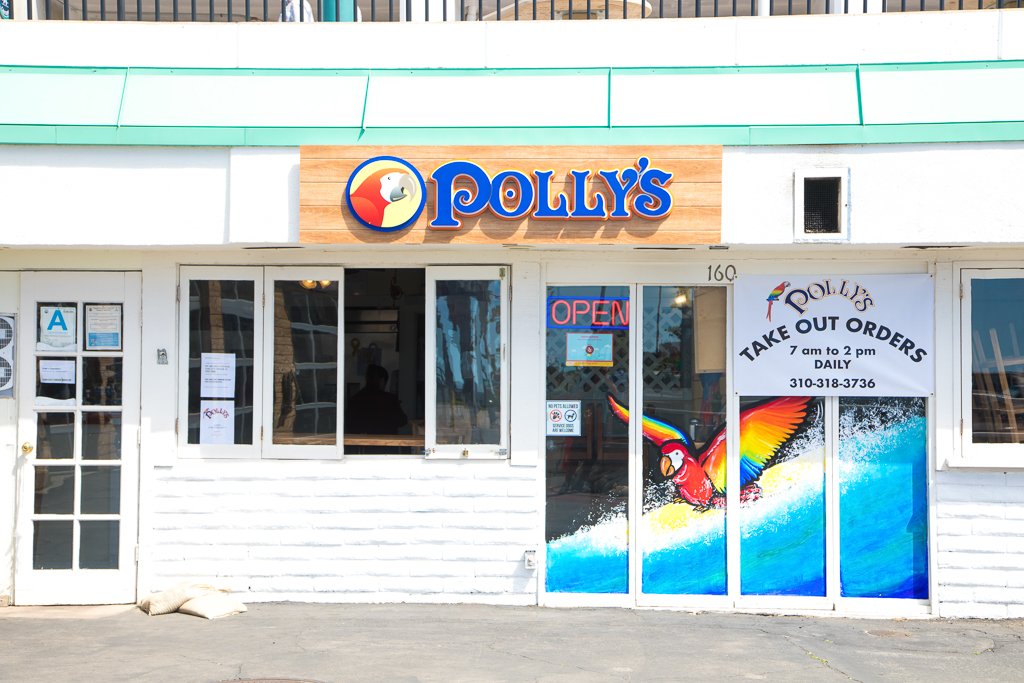 Polly’s, on the International Boardwalk, is allowed to remain open for take-out food. But neighboring retailers must close. Photo by JP Cordero

Redondo Beach pier businesses, with the exception of restaurants, have been ordered to close by midnight tonight, Mar. 27. Also ordered closed tonight, for at least a month, are several blocks on the west side of the oceanfront Esplanade, paths leading down from the Esplanade to the beach, Veteran’s Park overlooking the Esplanade, and the King Harbor boat hoist and hand launch areas.

The waterfront is among two dozen public gathering areas, including basketball and tennis courts, that will be closed to deter the spread of the coronavirus. (A full list of the areas to be closed follows below.)

Mayor Bill Brand stated Redondo had hoped to act in concert with the County of Los Angeles, which has jurisdiction over Redondo’s beaches.

“But we have all begun to act on our own now as the County continues to weigh if they will close the bike path and beaches,” Brand wrote in a Facebook post this morning (Thursday, Mar. 26).

“It makes sense for us to take these actions, but they’d be more effective if done in conjunction with the county’s closure of the beaches,” City Manager Joe Hoefgen said in an interview today.

Violations of the order are misdemeanors under the city’s local emergency proclamation. Locations chosen for closure were based on feedback from city employees and residents.

“These are the areas we’ve seen where social distancing has consistently not been followed,” Hoefgen said.

“While there are many people following the rules, there are enough who aren’t that we determined we needed to take these additional actions. And as we have one closure, for every action, there’s a reaction. We’re anticipating where people are going to go,” Hoefgen said. The goal, he said, is for individuals to remain in their own neighborhoods, though he acknowledged that there are residents for whom the beach is their neighborhood.

“We’re seeing too much congestion. We would rather explain later having gone too far, in terms of closure, than explain why we didn’t do enough,” Hoefgen said. “If we’re erring at all, we’re erring on that side. But I don’t think we’re erring — I think we’re doing the right thing.”

The order follows similar orders in neighboring Hermosa Beach, which will close its beach and Strand bike path on Saturday; and Manhattan Beach, which has closed its beach parking lots, except to residents.

Health officials nationwide have encouraged “social distancing” of at least six feet between people outside of their homes. Last weekend, after officials, including Governor Gavin Newsom, encouraged people to leave their homes for walks and exercise, Redondo Beach saw a significant increase in the use of its open spaces. Local leaders began contemplating closing public areas last Saturday when crowds gathered on the Esplanade.

“We really do not know how many residents or visitors coming to our towns have this new virus or where we are on the infection curve, so this is a critical time to eliminate areas where people are unsafely congregating,” Brand wrote in his Facebook post. “We live in a densely populated area and we need to flatten the infection curve so we don’t become another Italy.”

The Redondo closures are to remain in effect until 12 a.m. on April 24.

“We’re going to take these temporary measures and when conditions improve we’ll be able to open it all back up and we’ll be back to normal,” Brand said. ER