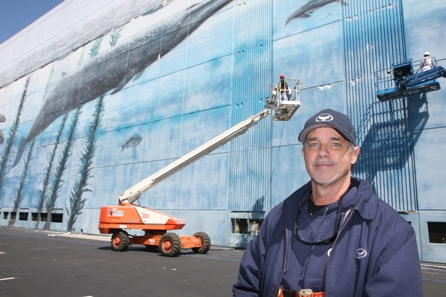 “I offered to work with them and they tried extorting me,” he told Easy Reader. “I don’t take kindly to it.”

The 95 feet high mural depicts whales in their underwater world. It was dedicated by Southern California Edison, the former owner of the property, in 1991. Artist Robert Wyland, hailed as the “Marine Michaelangelo” by USA Today, worked for months for free to complete it, using 3,000 gallons of paint.

When Pustilnikov approached the Wyland Foundation about the mural earlier this year, Steve Creech, its president, conveyed the artist’s wish to “explore ways to integrate portions of the mural into the final development.” He also asked whether the developer would consider supporting the foundation’s advocacy work, which focuses on clean water and healthy oceans.

Creech noted that the Visual Artists Rights Act grants authors of “recognized stature” the right to prohibit “negligent” destruction of their work, regardless of who owns it. He added that “much of the community would like to see the mural remain.”

“That being said,” he wrote to Pustilnikov, Wyland was “hoping this could be a win-win for everyone.”

Pustilnikov responded that the response was offensive and vowed to have it painted over in June.

According to its agreement with Wyland, Southern California Edison was prohibited from destroying the work for 20 years, or until 2011. That year, Wyland added new whales. Creech maintains that this extended the artist’s rights under the 1990 Visual Artists Rights Act.

Wyland work has been featured in the Olympics, and at the United Nations, and has been honored by Congress.

“Given that, and the fact that we believe the mural is a work of art of widely recognized public stature, we don’t feel the developer has the right to paint it out because he is suddenly offended,” Creech wrote in an email.

Pustilnikov said he would be happy to allow Wyland to cart the mural away.

“There are more important things for all of us to deal with and take care of today rather than [Wyland] trying to impede on my property rights,” he said.

A draft plan for the property is expected to be revealed in October. ER