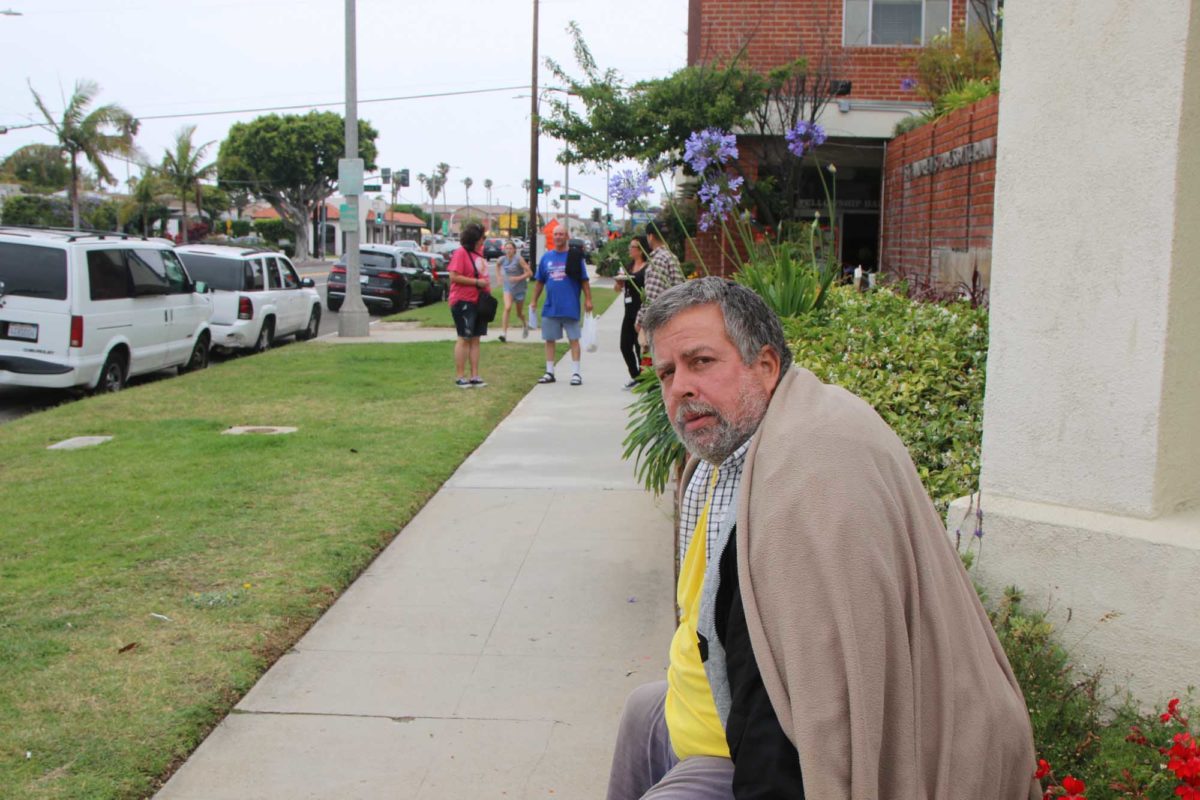 Ashley Roberts was still shaking as she gathered herself outside the Redondo Beach City Council chambers on June 4, before speaking in defense of herself and others like her who live on the streets of the Beach Cities.

“I feel like people look at us like we’re not human — we’re people too, and you don’t know what someone else has been through,” Roberts testified that night. “I’m not going to lie, my confidence has been a bit low. But I look at the value of life so much differently now.”

Roberts lives in a tent not far from the border of Redondo Beach and Hermosa Beach, on a section of land that she and her partner James Holscher have helped clear and tend to. They’ve rotated places, sometimes closer to the beach, sometimes over in Hermosa. But right now, their spot is their home — at least until James’s housing voucher comes in.

But the area they’ve been circling around for the better part of the last year could be a refuge for many more. The dirt lot near the corner of Francisca Avenue and Herondo Drive is one of two sites in Redondo Beach zoned for building temporary emergency shelters.

“Give someone a chance — why not make this into a property out here?” Roberts said. “They want a park? We don’t need another park! Make some property, something to help low-income people.”

There are many things standing in the way of that idea — land control among them; the Dirt Farm is not owned by the city, but by prospective hotel developer Mohamad Pournamdari — but among the biggest is political will. While the City has invested hundreds of thousands of dollars in resources and partnerships with homeless-servicing organizations, residents of Redondo Beach have become fed up with the city’s homelessness issues.

Redondo Beach was found to have 175 people experiencing homelessness on the night of the 2019 Los Angeles County Homeless Count, which took place in late January. That’s a 16-person increase over 2018, though still a decrease from the 2017 high of 258 counted during the annual point-in-time census of people living on the street.

“There are the truly homeless, and then there are people who are transients, or vagrants, who take advantage of the services that are being offered to the truly homeless,” said Redondo resident Debby Striff. “They create problems for the residents, hang out long after their meal service and engage in antisocial behaviors” — drug use, urinating in public and verbally assaulting passersby.

Striff is a leader of the Redondo Beach Residents Action Committee, a coalition of residents who have come together to “bring the attention of the lawlessness and antisocial behavior of persons within the community.”

RBRAC is a relatively new organization, but makes its presence felt at Redondo Beach City Council meetings — at the same meeting that Roberts testified in defense of people experiencing homelessness, RBRAC members shared their experiences, and urged the city to take action.

Their first target has been the city’s federal grant funding for local homelessness outreach programs, such as First United Methodist Church’s Shared Bread outreach — a campaign that was successful, as of Tuesday night’s Redondo Beach City Council meeting.

For 26 years, Shared Bread has offered meals to people experiencing homelessness in Redondo Beach. The program was spurred by the death of a homeless man on the church campus; soon after, the congregation — vowing to never let that happen again if they could help it — began serving free meals.

Over the years, its provisions have expanded. Hygiene items, warm clothing and a food pantry are available for those in need. In recent years, the program has been the beneficiary of federal grants through the Department of Housing and Urban Development’s Community Development Block Grants and disbursed by the City.

Last month, the Redondo Beach City Council approved First United Methodist Church’s grant request for $5,500, which was planned for food and hygiene supplies. The program, its leaders say, is rooted in the ideal of building a world where people don’t fall through the cracks.

But the church’s neighbors, in the area of Broadway and Torrance Boulevard, believe that the project has exacerbated — or even caused, to an extent — problems that have increased in recent years. In their view, their rights to life and happiness are now subordinate to the “vagrants” or “transients” they see causing trouble.

“I’ve got a view of everything: I live directly across from First Methodist, and I’ve watched this for years,” said neighbor Dawn Divine. “I’m exhausted…unfortunately, these people are called homeless, which yes, they are, but they’re sick, and they’re druggies, and they’re criminally scary.”

Other residents said they feared for their safety and their belongings. One woman reported that, after years of living there, she now feels like she must lock her doors; a man said that he watches his security cameras every night so he can feel comfortable that his wife has returned.

On Tuesday night, the Council heard their voices.

Council members Todd Loewenstein and Nils Nehrenheim united to say that they would not approve of any CDBG plan that would give Shared Bread a grant, while Mayor Bill Brand promised to veto any motion passed by the other three Council members that funded Shared Bread.

Nehrenheim went further, indicating that he wanted to hold grant money from St. Paul’s Methodist Church, on Nelson Avenue, to cut off a trail of free food that he believes attracts the homeless to Redondo Beach. His motion, supported by Loewenstein, blocked both churches from receiving $5,500 each.

Councilwoman Laura Emdee pushed back in favor of St. Paul’s, saying she knows that church’s program helps many in need.

“I understand that you don’t want to send the message to feed them, but in my neighborhood, it’s helping single moms who are food stressed, that are in danger of losing their homes,” Emdee said. “It’s not something I would want to put on those citizens in District 5 for sure.”

“They haven’t created this issue because they’ve been there a long time…I personally don’t think that taking away $5,000 from Shared Bread is going to have the immediate impact that you’re hoping for,” Horvath said.

“I don’t think that this is going to change it, but I want to get their attention,” Loewenstein said of Shared Bread. “I want them to meet with us to do the things they need to do to keep from compounding the problem…enough is enough. I’m sympathetic, but what I’ve seen over the last two to three months has appalled me, in terms of behavior.”

That motion passed, 3-2, with Loewenstein and Nehrenheim against. The members of RBRAC rejoiced.

“We’re sorry that this grant has been declined, that the city has not elected to serve Federal money to serve people in our community,” Vetter said. “[But] it’s not going to stop our commitment to serving hungry people on Wednesday nights.”

The church, she said, is responding to the need to create systems of care, providing food and clothing for more than 100 people each week.

“I sometimes feel that we get blamed for the existence of homeless people. But it’s a shared problem — the recent homeless census makes clear that it’s a countywide problem, and not a local problem exclusively,” Vetter said. “I’m sorry that, at this moment, the city has chosen to not continue its support. But it won’t stop our ability to continue to live out the commitment.”

The City is attempting to live up to its end: a major corner of its budget, passed Tuesday night, included a new pilot program for the City Attorney’s Office to establish vertical prosecution protocols for repeat drug offenders and habitual offenders performing crimes of opportunity. Essentially, one prosecutor would handle a case from start to finish, and ensure that police would learn any terms of probation for known individuals experiencing homelessness.

The Redondo Beach Police Department will aid the department’s development of a Special Operations Division, with its own captain, to oversee the department’s own outreach and relationships with homeless outreach organizations, including People Assisting the Homeless and Harbor Interfaith.

“One of the toughest things to get across to the public is that just offering them services doesn’t always work; there’s a lot of trust-building that has to take place,” RBPD Chief Keith Kauffman said. That outreach has become just as important a part of the department’s toolbox as law enforcement actions.

“Oftentimes, an arrest is just a bandaid,” Kauffman said. “It’s hard — the system as it worked prior doesn’t have the teeth it once did.”

One of the biggest obstacles to enforcement actions is the recent U.S. Ninth Circuit Court of Appeals decision in Martin v. City of Boise, which ruled, in part, that cities can’t punish people for sleeping on public property unless there are adequate and relatively accessible indoor accommodations — i.e., shelters. But there are very few shelters in the South Bay, with the nearest in San Pedro.

As part of its budget motion, the City will investigate reserving beds at nearby emergency shelters. But it may be a hard sell for local unsheltered people, like Ashley Roberts.

To some people it’s stupid, but this is home to me,” Roberts said from outside her tent. Roberts is a domestic violence survivor. She grew up in Redondo Beach, graduating from local schools. Her family — including her daughter, who lives with her grandmother — is in Redondo. She hopes to get back to work before long, then to an actual home, but the tent will do in the meantime. And if she needs to keep speaking out to stand up for unsheltered people, to be a voice for the voiceless, she will.

“Look at all of the homeless people…Why not make this into a property with more low income housing?” Roberts said. “Why not give someone else a chance out here?”