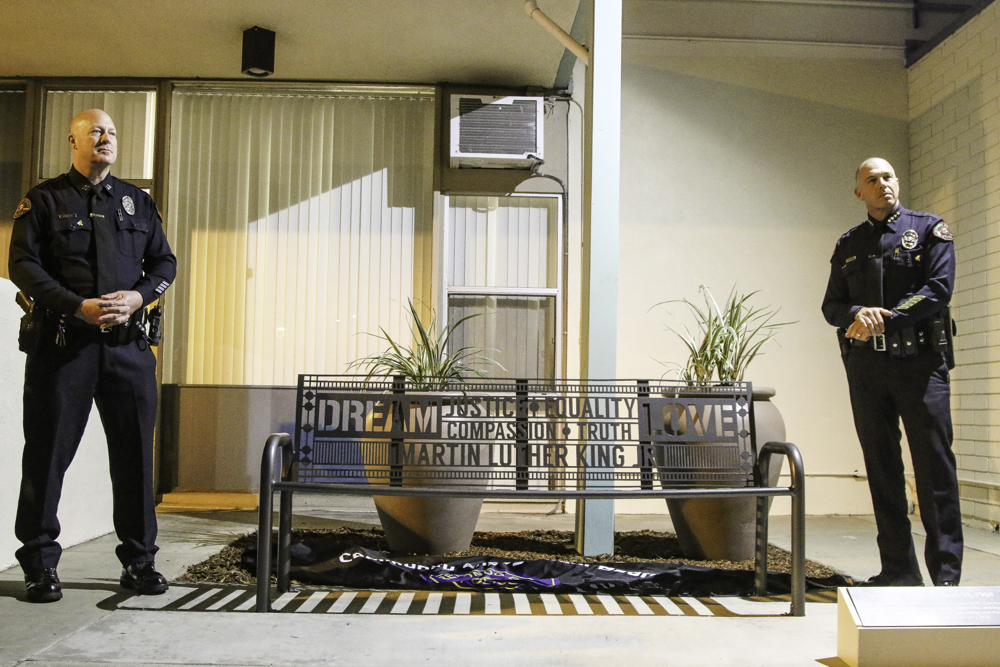 Redondo Beach Police Keith Kauffman (right) on Martin Luther King Day at the unveiling of a bench at the police department in honor of the civil rights leaders. Photo by Kevin Cody

Redondo Beach police arrest about 2,300 people annually, but use of force in those arrests occurs only 7.8 percent of the time, city council members learned Tuesday night.

Police Chief Keith Kauffman outlined the department’s use of force policies in a report issued in response to “concerns” expressed by residents related to national issues of civil unrest.

Kauffman described his department as “very transparent” and noted a survey showing that local citizens’ “level of trust and safety” in the department “has gone up six points” in recent months.

The Redondo Beach department changed its use of force policy in 2016 to include requiring a third party to investigate officer-involved shootings, Kauffman said.

More than 67,000 incidents are answered by Redondo Beach police annually. Use of force, according to Kauffman’s report, is used about 180 times a year, or .27 percent of the time. During the past three years, one incident involving use of force was determined to be “out of policy” following an investigation, and five others required additional training for the officer.

Kauffman said the department trains officers in “de-escalation” and other non-lethal handling of different kinds of situations. Policy also requires officers to wear functioning body cameras at all times.

“We are now receiving advanced training on dealing with the mentally ill and others in crisis,” he added. “In the last three years we have changed our approach to the mentally ill and we deploy clinicians with officers and use various social services to address homelessness.”

As part of the department’s push for transparency, it posts all use of force statistics on its website, Kauffman said. ER