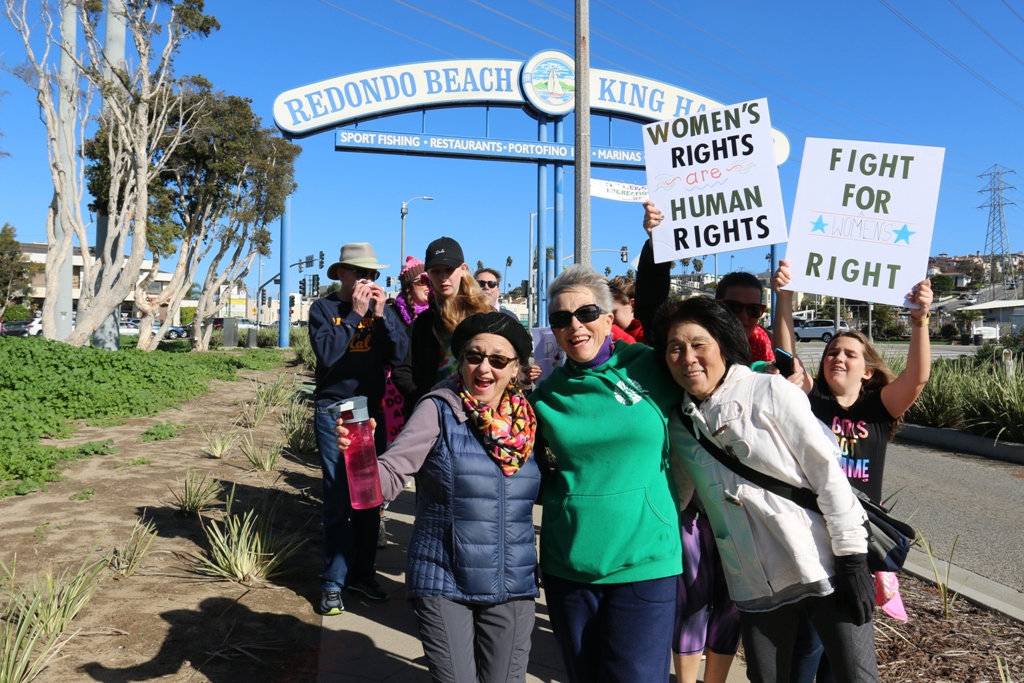 Kathleen Davis, Phyllis Pennings and Mindy Freiss, of Hermosa Beach, were among the marchers.

More than 1,800 people converged Saturday morning at the Redondo Beach waterfront for “Women’s March Redondo Beach,” which organizers described as a stand against intolerance and injustice.

The march, which lasted from 10 a..m. until about noon,  was pulled together in less than a week, according to organizer Jenniffer Moore.

“I’m from here, I’ve lived here almost all of my life, and I have three kids under the age of six. There’s no way I could’ve made it to the march in Downtown L.A.,” Moore, a Torrance resident, said. “My intent was to make it as family friendly as possible, and to be all inclusive.”

Though many of the Redondo event’s sister marches, including demonstrations in Washington D.C., Los Angeles, New York and Phoenix,  directly protested the policies of President Donald Trump, Moore made clear that Redondo’s march was designed to be  “nonpartisan…rather than to criticize politicians and political parties.”

Redondo councilman Christian Horvath and recently re-elected Assemblyman Al Muratsuchi, a Democrat, were on hand for the beginning of the march.

“I would never have imagined to see this many people in a parking lot in Redondo Beach. You all are amazing,” Horvath said. “I’m here today because of my children, because we need to make America kind again, because love is really all you need.”

As the march began, Muratsuchi hung back to thank participants, and reassure them that California is “trying to set the example for the rest of the country.”

“We’re going to be fighting for everyone here, but you’ve got a lot of friends in the South Bay,” Muratsuchi said. “The real fight is going to be in the nation’s capital.”

People of all ages showed up for the event, from babies strapped to their parents to grandparents carrying signs.

Gardner, like Moore, would have liked to have gone to Women’s March Los Angeles, which attracted an estimated 750,000 people; but she’s recently pregnant, and given the unpredictability of large crowds, her sister convinced her to stick to the South Bay.

“We’re marching because we’re mothers and daughters,” Gardner said. “I stand strong with Planned Parenthood. I’ve supported them since I was 16, and they’ve been there for me when I’ve needed them.”

Her family marched alongside her, carrying their own signs, for more than just supporting the well-known women’s health organization. Her father, a small business owner who lives in Riverside, is worried how federal funding cuts by the Trump Administration would impact his medical coverage.

Across from the Veterans of Foreign Wars post, near the corner of Catalina and North Gertruda Avenues, Russell Finch clapped and cheered as loudly as anyone marching along the sidewalk.

“Get down with your bad selves!” he yelled to the marchers, a wide smile stamped across his face, before turning. “This is the greatest thing, man.”

Finch works at the VFW, but at that moment, he was playing hooky. One of the post’s regulars, he said, pointed out that there was a march going on, and Finch rushed outside.

Trump’s election, Finch said, has been a literal hazard to his health; he’s been depressed and unable to sleep well, if at all.

“I haven’t been able to even look at the news,” Finch said. “I can’t wrap my head around this calamity.”

But the march boosted his spirit, and he was doing his part to do the same for flagging demonstrators.

“It warms my heart,” Finch said. 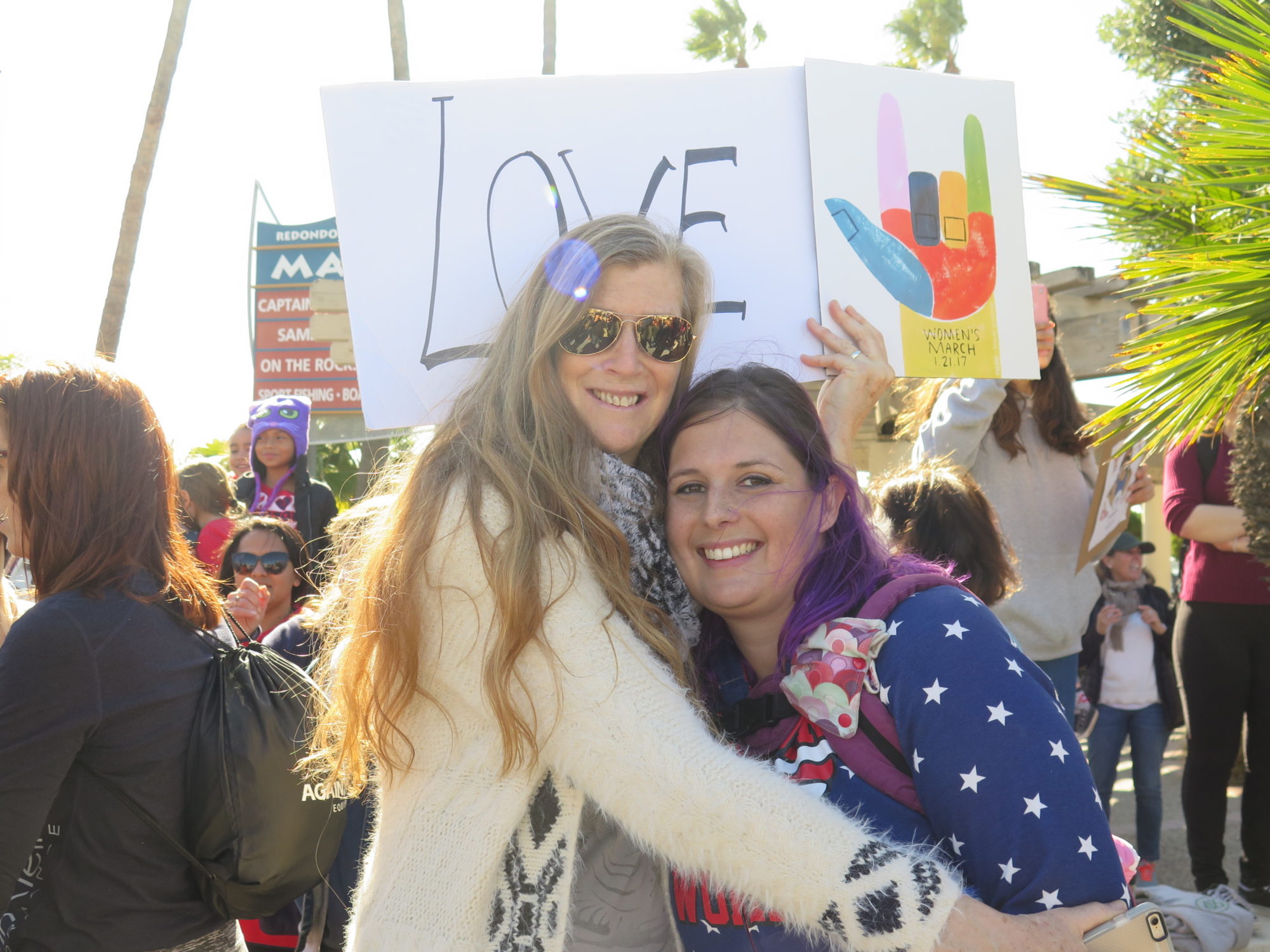 About 20 miles away, the Beach Cities made their presence felt in Women’s March Los Angeles.

Hermosa Beach residents Missy Sheldon and April Wayland organized a busload of concerned citizens to join the reported 500,000 who marched through the streets of downtown Los Angeles.

“We gathered our group together to stand up for women’s rights, human rights, and all of the issues we’re concerned about, especially with the new presidency going forward,” Sheldon said, noting that Trump’s plans to defund the Affordable Care Act and women’s health organization Planned Parenthood among her worries.

The bus, which left from the Hermosa Beach Community Center, took 58 men and women to join the larger march in the heart of L.A. At one point, the streets were so packed with demonstrators that many, Sheldon and her group included, couldn’t move.

“It was inspiring, and overwhelming. It was really wonderful,” Sheldon said. “The energy was high, the spirit was great, and a lot of camaraderie developed…it was a really great experience.”

Redondo’s Melanie Cohen, no stranger to demonstration herself, also made the journey to the L.A. march.

She was moved to join when issues of Trump’s history of misogyny and alleged sexual assault came to light. She was particularly disgusted by a video in which Trump described grabbing women by their genitals without their consent.

“As far as I’m concerned, this man has set us back hundreds of years,” Cohen said. “I believe the job of the federal government is to protect [its citizens] and once Trump came around, all of those protections have gone out the window.”

The march was largely without conflict, drawing support from many honking and cheering passers-by. But a few opponents of the march made their presence felt.

One such heckler in a white SUV rolled down his window at the intersection of Herondo Street and Valley Drive.

“Trump is awesome! Suck it up, snowflakes!” he yelled before turning and driving off.

He got a few scattered boos in return, which quickly turned into laughter.

The heckler had executed his left turn onto Valley Drive, headed the wrong way down a one-way street.

The march also took a turn toward the overtly political near its conclusion, as mayoral candidate Bill Brand borrowed Moore’s megaphone to stump to the gathered onlookers.

“I want to congratulate all of the protesters that are out here today — way to turn out against divisiveness,” Brand said, quickly pivoting into what he called a “quick campaign plug.”

“The same big money interests that took over Washington are trying to build a mall in the harbor,” Brand said, asking for the vote of the people in attendance before handing the megaphone back to an uncomfortable Moore.

“My intention wasn’t to call this a protest march…this is about unity and equality,” Moore said. “I’m very uncomfortable. That wasn’t appropriate.”

The crowd that showed was beyond what Moore hoped for. The number of interested attendees on Moore’s Facebook posting topped out at 457, and she expected about half of that would show.

“I’m in awe of all the love,” Moore said as the march wound down at the corner of Harbor Drive and Portofino Way. “It’s been so tense this past year and to come here and see over 2,000 people makes my heart feel full, really.”

Note: This posting has been edited to reflect the story “Women on the March,” published on Jan. 26.