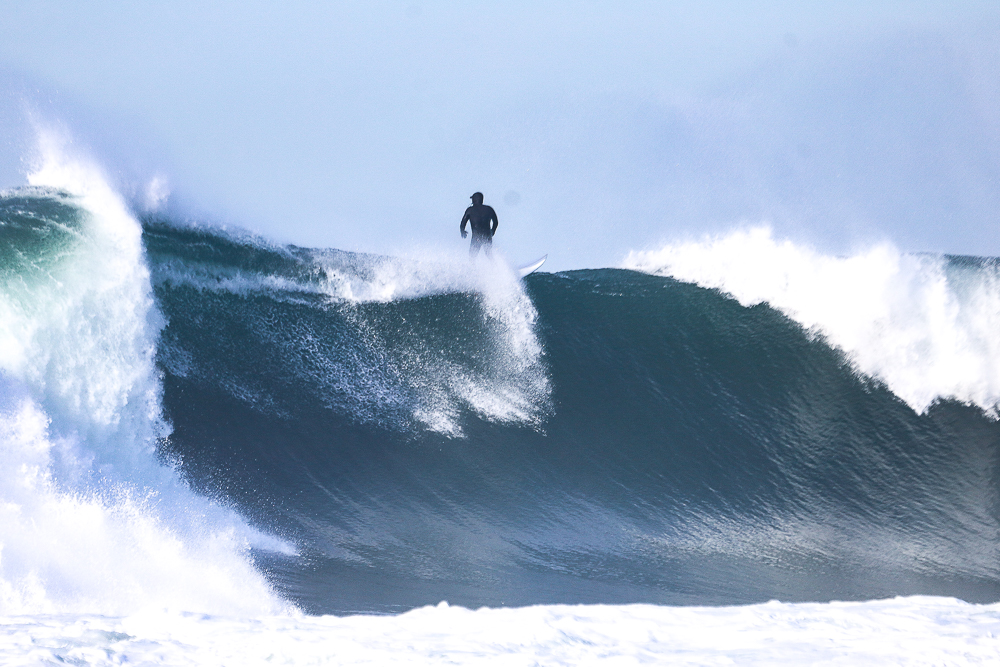 Chris Rodriquez watched the Redondo Breakwall for fewer than five minutes Friday morning before pulling on his wetsuit. Despite a six-foot high tide, waves were breaking just inside of the yellow sailboat racing buoy. The racing buoy is 25 yards off the end of the breakwall.

Friday’s swell invited comparisons to the 1988 swell that blew holes in the Breakwall, crossed the harbor channel, and chased guests out of the Portofino Hotel. 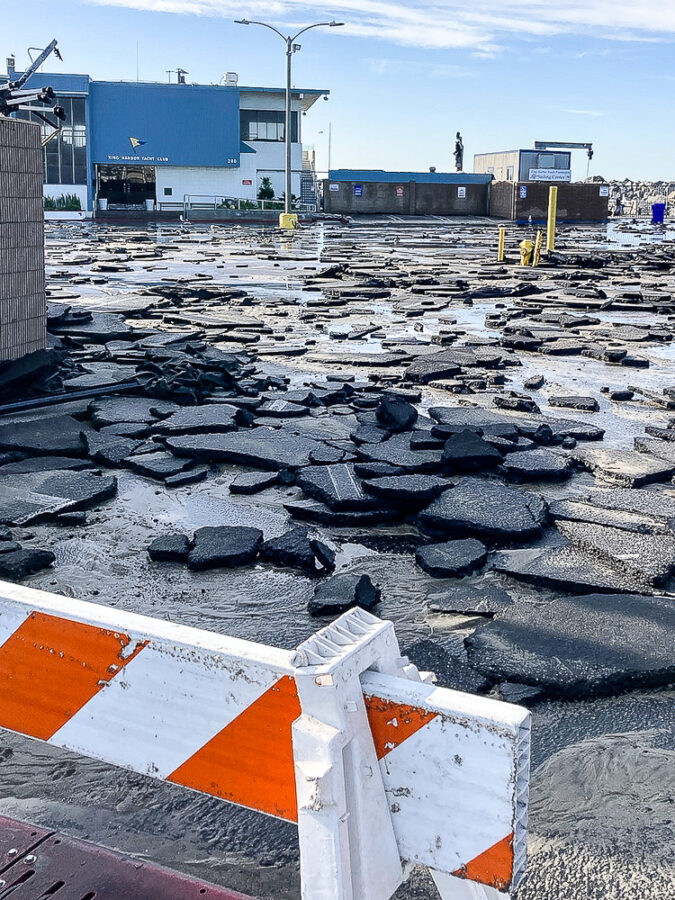 The King Harbor Yacht Club parking lot looked like a jigsaw puzzle that had been tossed in the air. Blowholes in the asphalt had been insufficient to relieve the surge coming up from beneath the parking lot. Redondo Deputy Public Works Director Mike Klein described the parking lot as having “delaminated.”

The damage might have been worse, Klein said, had the city not used bulldozers last month to push sand away from the north side of the breakwall.

The Redondo Harbor Patrol, with help from Bryson Marine, spent Thursday night and early Friday morning securing boats broken loose in the harbor by waves that again breached the breakwall.

The yacht club’s L-shaped dock floated off its 10-foot high pilings and washed up on the rocks across the main channel. 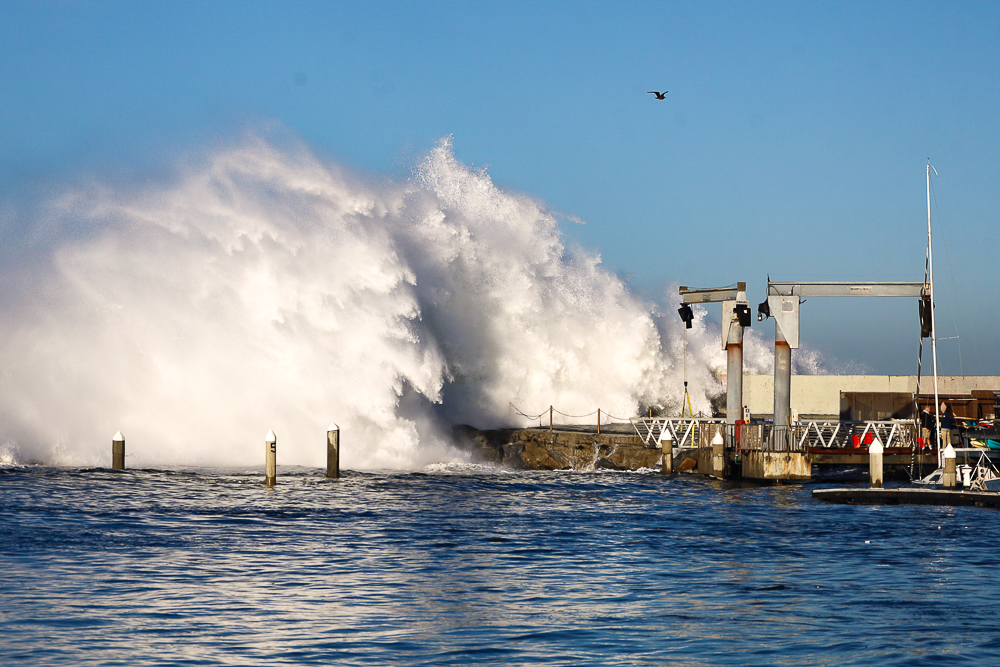 Another measure of the surf’s power Friday morning was the height of the spray when the waves hit the breakwall. The yacht club boat hoists are 20 feet tall. The spray shot up  twice that high.

Waves were still breaking over the breakwall Friday, when shortly before 9 a.m., Rodriquez decided he would walk out along the algae-covered cement path on the oceanside of the breakwall, to the flat rock commonly used as a jumping off point. The rock is about 100 yards from the beach, which on an ordinary day, is past where the waves break.

Rodriquez was the runner-up in the South Bay Boardriders Big Wave Challenge in 2019 for a wave he caught at the Breakwall, and the winner that year of the Wipeout of the Year. Jeff Jones, who won the 2019 Big Wave Challenge, was watching the surf with Rodriquez Friday morning, along with fellow Breakwall regulars Chris Wells, Greg McEwen, Brett Madden and Jeremy Griffin. Through a combination of injuries, and the hope that conditions would improve as the tide dropped, Rodriquez was left to paddle out alone. 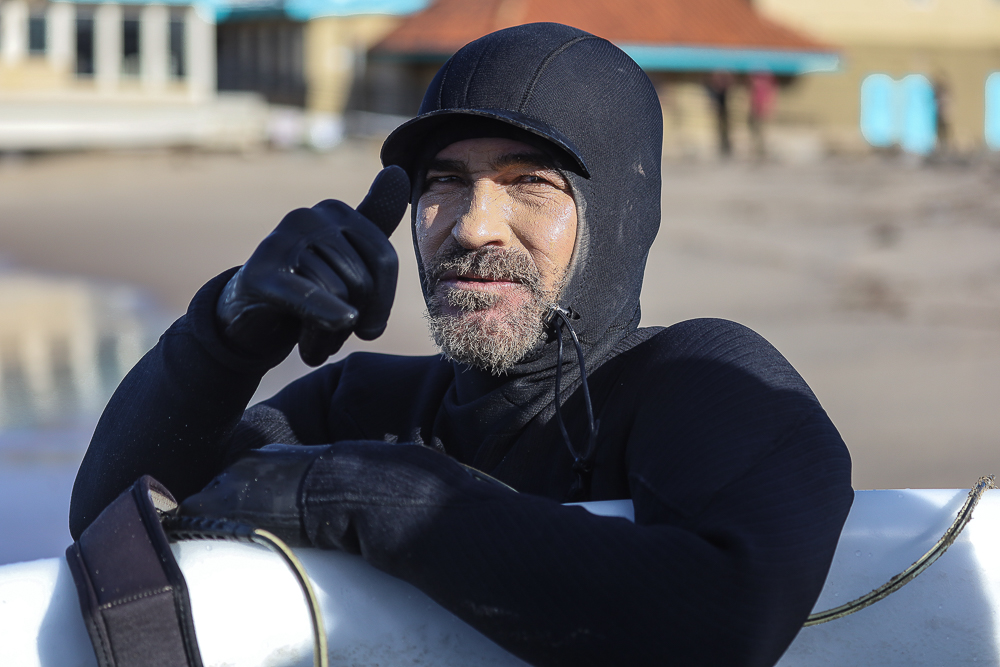 He waited for a lull and got lucky. After running out to flat rock, he jumped into the water, and reached the racing buoy without getting his hair wet.

Then he waited, long enough for the watching crowd to wonder if his presence in the water hadn’t quieted the swell. Waves with 10-foot faces passed through, but nothing approaching the 20-foot waves seen before he paddled out.

Then there was a collective gasp on the beach.

“He’s hung up,” someone commented. And for long enough for the comment to pass down the line of spectators, Rodriquez appeared stuck at the top of a 20-foot-plus wave.

He was riding a 7-foot-8 board shaped by Pat Ryan, who is to Breakwall boards what Dick Brewer was to Sunset boards, and Joe Bark is to Maverick boards.

Wells acknowledged Friday morning that his Breakwall board is a copy of Rodriquez’s board.

Ryan’s Breakwall boards have narrow noses to minimize lift at the lip, and exaggerated kick in the tail to accelerate turns. 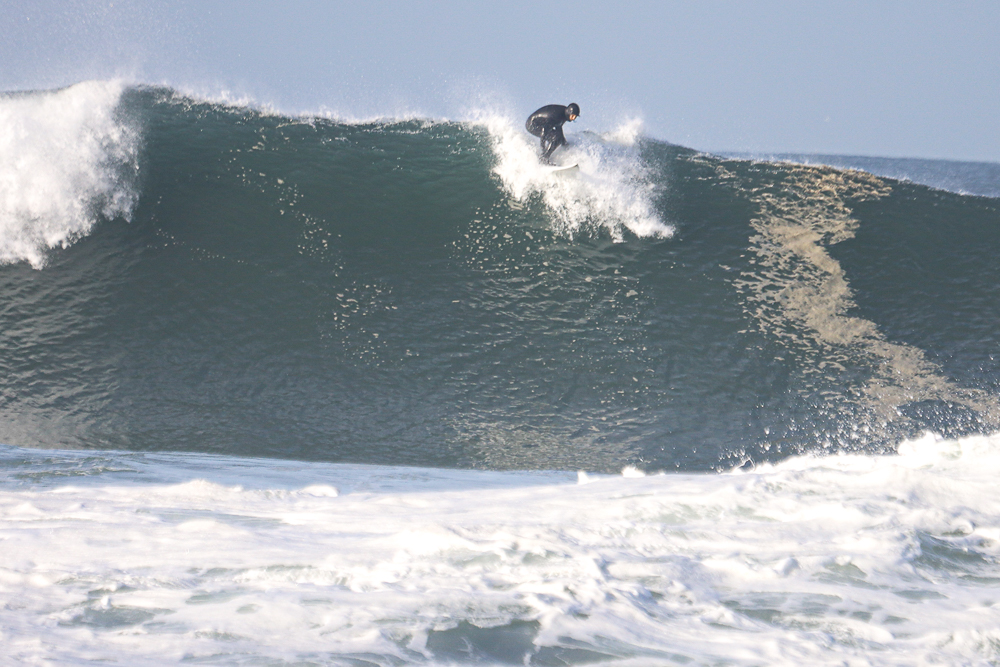 But the nose was lifting. Instead of nestling down the steep face of the wave, it was sticking straight out in mid air.

The expectation on the beach was he would get pitched, and if lucky get washed in, though without having caught a wave.

But a characteristic of the Breakwall wave is that it jacks up after bouncing off the breakwall, causing the lip to hover. In that moment, Rodriquez weighted his front foot to push the nose town until it met the wave, and then safely squatted until he reached the bottom, where he leaned hard enough on the tail to get slingshotted up, and over the close-out wave. 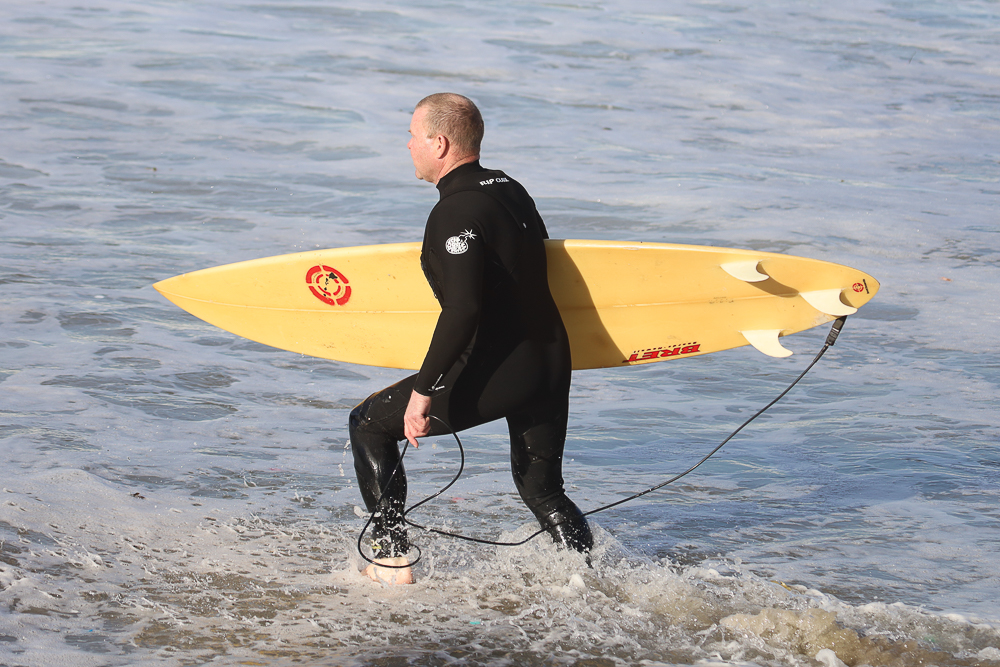 That inspired Griffin to paddle out.

He and Rodriquez sat together by the yellow racing buoy long enough for worries to form again that the big sets were done.

But then another 20-foot-plus close-out darkened the horizon. Griffin had an easier take-off, but was himself nearly pitched over the falls on the exit. 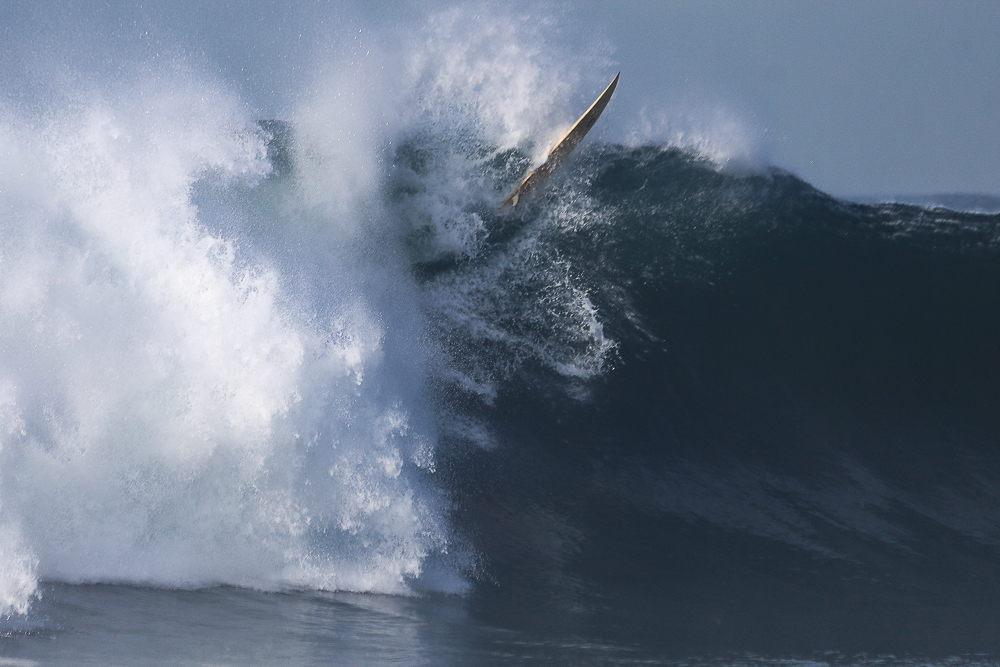 Before he could climb back to the top of the wave, the lip came down, forcing him to shoot his board up the face of the wave. Despite being batted by the lip, the board continued skyward. When it ran out of leash, it yanked Griffin out the back.

After that wave the sets did fade. The surfers who waited for conditions to improve were left waiting, possibly for a long time. ER