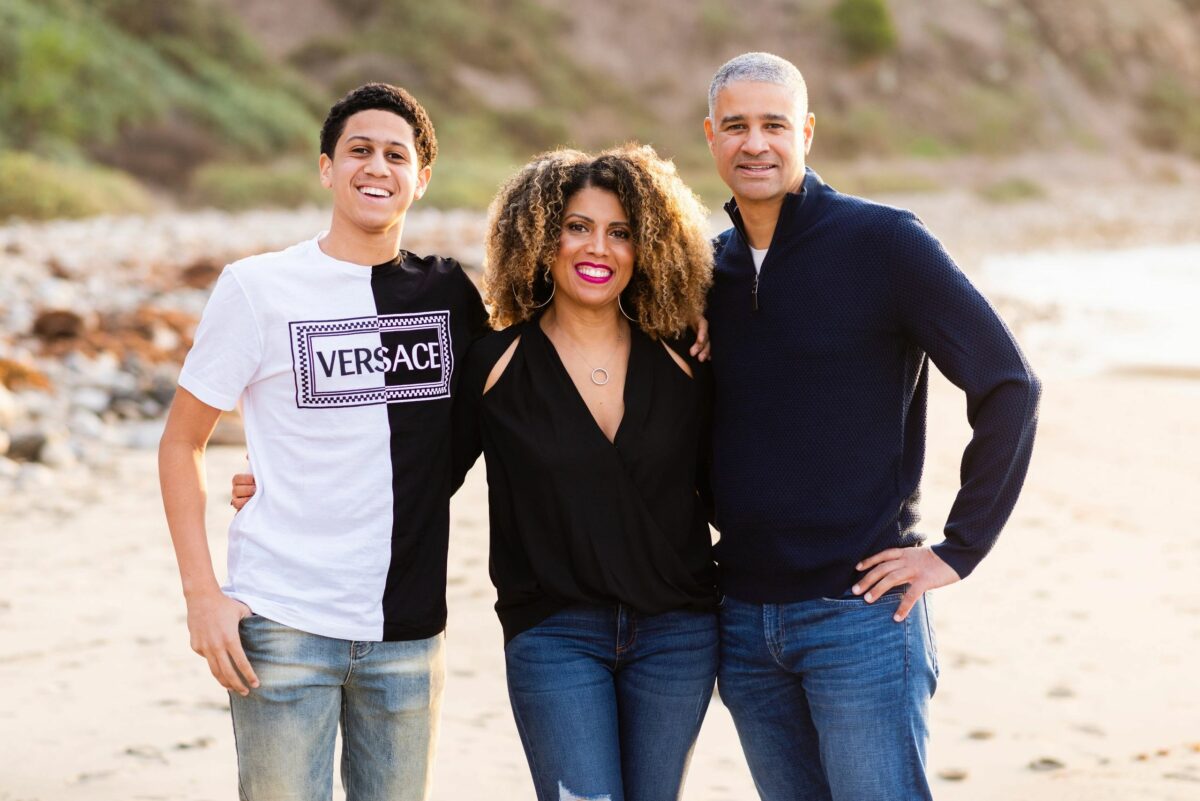 Ashton, 17, with his parents, Kimberlee and Asher. Photo courtesy of Kim Isaacs’ campaign

A little over a week before the Redondo Beach Unified School District school board election, Kimberlee Isaacs found a message in her Facebook inbox.

A friend had sent her a photo of a two-sided flyer. Both sides featured a photo of her face, the one on the yard signs and door hangers she’d been handing out as part of her campaign to be the first ever Black woman on the board. In the photo, she wears pink lipstick and gold hoop earrings and looks the parts she plays: businesswoman, accountant, wife, mom. A red circle had been digitally added to the photo, and through it, a line across Isaacs’ face.

Is this who Redondo Beach wants on their school board? the flyer said. Don’t vote for Kimberlee Isaacs.

The flyer displayed screenshots of posts Isaacs had made on social media, dating back to 2017. One was a quote she’d posted to Facebook after being told by a white person to “leave this country,” the only country that four generations of her family had ever known and that both of her grandfathers went to war to defend. “Racism is so American,” the quote said, “that when we protest racism the average American assumes we’re protesting America.”

Another was a video of three of Isaacs’ friends being harassed and arrested by officers of the Los Angeles Police Department while walking an older man to his car after a protest against police brutality. One emerged from the altercation with a dislocated shoulder. In the post’s caption, Isaacs called for defunded police forces and associations. The flyer also quoted Isaacs saying, during a two-hour podcast, that the American flag does not feel, to her, like a symbol of welcome.

Are you tired of the infusion of race into every aspect and problem in American life? the flyer said. Do you still believe in equal protection, the concept of color-blindness, and treating people as individuals, not members of groups based on melanin content or national origin? Do you want a school board member who appears obsessed with race, sees her country as irredeemably racist, who thinks its flag, even today, is a symbol of racism as are those who fly it…?

The creator of the flyer identified himself as “just a dad” with two students in Redondo Beach schools. He included an email address for voters interested in links to Isaacs’ social media accounts.

“I was like, this is so weird,” Isaacs recalled of seeing the flyer for the first time. “Either you’re going to vote for me or you’re not. If you have a problem with me, just don’t vote for me. Why this need to spread flyers around town?”

Isaacs also received an email from the anonymous dad, which was also addressed to local reporters, a council member, and Brad Waller, a member of the school board. The writer explained that he had been a resident of Redondo Beach for 12 years, and that he had spent his own money to print over 700 copies of the flyer he had attached because, he wrote, “There are a lot of concerned Redondo Beach voters who believe these views and Mrs. Isaacs language are abhorrent, and certainly have no place on the Redondo Beach School Board, City Council, or in our children’s heads.”

Waller replied to everyone on the thread that he couldn’t take an anonymous email seriously, and did not need to waste his time reading it. Isaacs responded also, first offering her thanks for the opportunity to reply directly.

“This whole campaign you have waged against me is actually discounting my experience as a Black woman in America,” she wrote.

“You have not addressed the fact that you debased virtually every aspect of this nation, past and present, with the charge of racism,” the anonymous writer responded back, before explaining that he judges people based on their “character, their minds, their words, and their deeds, not their melanin content.”

The flyers led to Facebook messages telling Isaacs to go back to where she came from. One person told her if he saw her in person, he’d give her a reason to call the police, perhaps for robbery of her home. A friend sent her a photo of one of her lawn signs with her face exacto-knifed out of it, which felt, to Isaacs, violent, deliberate, and threatening. Security affiliated with the Black Lives Matter movement volunteered to keep watch over her house every night.

Isaacs posted an official statement to her social media accounts. She looked into the camera, apologized if her posts offended anyone, and explained that she believes “deeply in the values, ideas, and the promise of the American flag.”

“That’s why I’m dedicated to unity, diversity, and serving the needs of all … That’s why I’m committed to representing everyone’s voice. It’s why I’m a social justice activist. And it’s why I’m running for school board, to make sure that everyone feels seen and heard.”

Isaacs and her husband, Asher, moved to Redondo Beach from Westchester two years ago so their teenage son, Ashton, could attend Redondo Union High School.

A little over a year later, the coronavirus forced people everywhere to remain in their homes, and a video of another Black man dying at the hands of officers of the law brought simmering racial tension to a boil.

An online petition circulated throughout the South Bay in the wake of George Floyd’s death. Created and signed by students, the petition called for more books in curricula that reflect the true history and experience of people of color in America. The petition cemented Isaacs’ decision to run for a seat on the school board, where she could both contribute her 30 years’ experience working in accounting and advocate for more inclusive education.

“It was a mixed group of kids that put that petition together, Black kids, white kids,” Isaacs said. “I’m running for them. And I’m running for the kids that don’t have the experience of being a person of color, because being better educated about history and racism will make a difference in their lives, too. We are a very diverse country and getting more diverse, and every child needs to be educated on these things. We need to prepare our children for the world.”

Isaacs said she left her social media accounts “unscrubbed” on purpose when she began knocking on doors, building an online presence, and hosting virtual conversations about education.

“I did not want to make my [social media accounts] private because I wanted to be truthful about who I am and what I believe in,” she said. “You don’t have to agree with me, but I’m not going to pretend to be somebody I’m not. The issue is that Black people in this country have had and still have a completely different life experience than white people, and I’m going to be truthful about that.”

Being truthful about that, she said, means remembering not only the kidnapping and the slavery, the rupturing of families, the Jim Crow laws, lynchings, poll taxes, lost geneaologies, intergenerational traumas, and policies and practices that work against Black people in America, but also grappling with police brutality and institutional racism. This kind of reckoning, Isaacs said, begins in homes and in schools. It happens through books, she added, that help kids who aren’t Black understand why a Black person might view the American flag or July 4, 1776 differently than a white person.

“If you understood all that, then you would understand why I would say defund the police, and you would understand my point of view,” she said. “Especially after my friends were arrested after a peaceful protest. Especially after so many Black and brown Americans are killed by the police almost daily in this country. And you would be like, okay, I get it. Instead it’s no, we need to be colorblind, why is everything about race, and all that. When you are someone who doesn’t have close proximity to Black people who discuss their experiences with you, or you haven’t been educated about the accurate history of what really happened, and still happens, in this country to Black and Indigenous people, you are going to assume their experience is the same as yours. It’s easy for somebody who is white to not ever think about it or talk about it because that’s not been their experience. And if you’re in a position of leadership, especially when you have a diverse population and school district, it’s possible that you’ll have a blind spot and you’ll miss something. But if you have someone who has a different life experience that matches or mirrors some of the kids in the district, they’ll be better able to help make decisions for the direction of education for children of color and make sure all needs are being addressed.”

For Ashton, now a junior in high school, the start of his mom’s campaign was exciting. It felt historic, like the dawn of something new. He canvassed neighborhoods with her. He knew she was running for him, because of her love for him and her desire to give him a world where everybody feels included and accepted by their communities.

“She’s always talking to me about being aware of everything that’s going on and putting myself in somebody else’s shoes and not treating anyone differently because they’re different than me,” Ashton said.

“I teach my child about his privileges all the time,” Isaacs said. “I tell him, you have privileges you didn’t earn, and that means you have a burden to stand up for the people who don’t have that privilege. I’m like, you’re a man. That means you look out for women, you don’t let your friends talk about women in a certain way, and you say something if they do. You’re a heterosexual cisgendered man. That means you speak up and say something if your friends are talking about gay people, queer people, trans people. You don’t have to worry about not having food to eat. You just happened to be born into a family that can afford it. If you’re in a situation where somebody needs something, you help them. I’m trying to raise him to be aware of other people. That’s my job.”

Watching his mom challenge a status quo, Ashton felt proud of her courage, passion, and resilience. And then she started getting threats, and then there was a security guard outside his house every night.

“They cut her face out,” Ashton said. “I feel like that’s doing the exact opposite of what she’s trying to do, which is include everybody.”

For a time, Isaacs felt anxious about the counter-campaign. She worried people would turn on her. She assumed no one would vote for her. But something she didn’t expect happened: a flood of support arrived in the form of messages, calls, texts, and material help from neighbors.

“It just really helped me to see that I’m not alone and there are people who either understand or are trying to understand,” she said. “Redondo is not a city full of people who hate diversity. It’s not. It’s a small few. It brought me to tears, the number of people in this community who have my back. It really gives me hope for the future.”

Whether or not she wins on Tuesday, Isaacs hopes her campaign plants a seed.

“That’s how I was raised,” she said, “to keep trying to make wherever you are in the world better than you found it.” ER