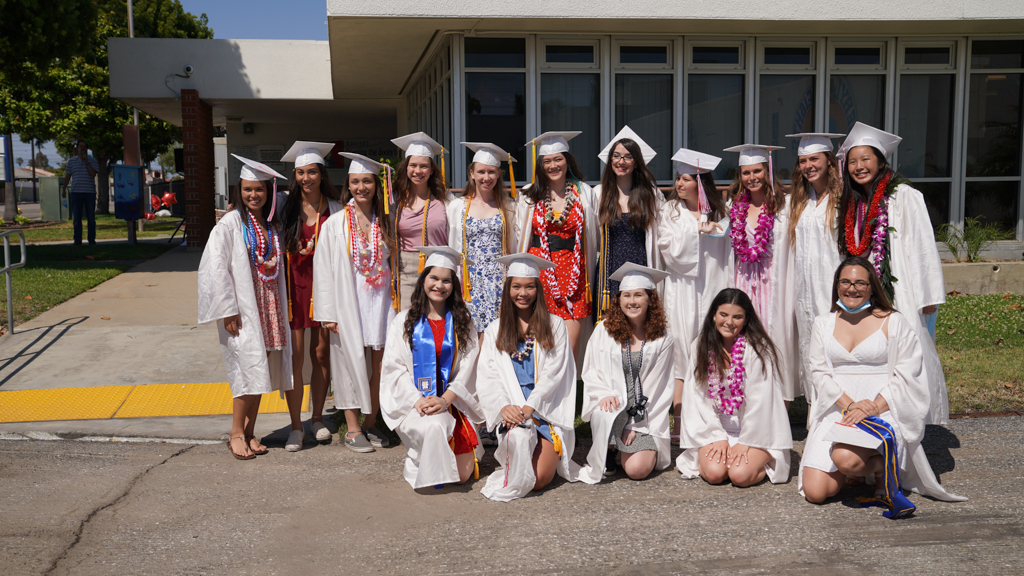 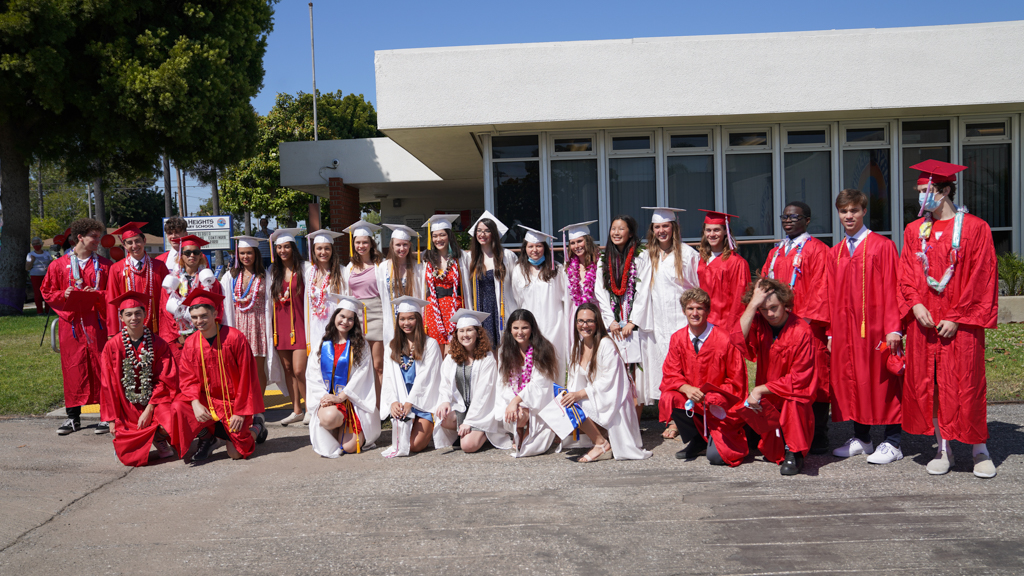 Three and a half weeks before the graduation date that had been set the previous year, Redondo Union High School Principal Jens Brandt and his team faced the daunting reality: for the first time in 113 years, the graduating class of the oldest high school in the South Bay would not be walking at Seahawk Stadium.

Members of the planning team held out for as long as they could, hopeful there would be a loosening of countywide and statewide bans on large gatherings, intended to flatten the Covid-19 curve. But each day, the risk of not having any kind of graduation at all grew higher.

The team began researching production companies that could deliver a virtual graduation. They interviewed three and finally settled on GradPro, which offered the most student-centered package. They offered not only a ceremony but also footage commemorating an entire high school experience.

Students were asked to submit multiple video clips: walking, holding their diplomas, offering personal messages of thanks, throwing their caps into the sky. 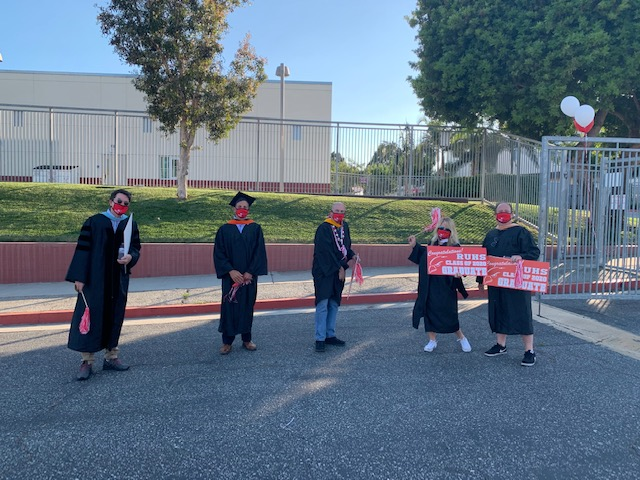 “Once we saw the video submissions, we were truly blown away by the creativity and resilience of this senior class,” said Michael Henges, a senior government and economics teacher and last year’s California Teacher of the Year, who was part of the graduation planning team. “Their individual personalities, diverse interests, and class unity all came through in a way that a traditional ceremony could never allow.”

The evening before the graduation video aired, a car parade proceeded down Seahawk Way for an hour and a half. Students and their parents drove their cars, decorated with signs, words, balloons, and even pompoms, past masked, socially distanced, sign-waving faculty. Horns and music blared as they did laps around the School.

The following evening, students and their families gathered to watch the nearly three-hour video production, which has to date been viewed more than 8,000 times. Faraway relatives watched from their living rooms. The bleachers at Seahawk Stadium were empty on June 11, but all across Redondo Beach, homes and backyards were erupting into cheers and applause. 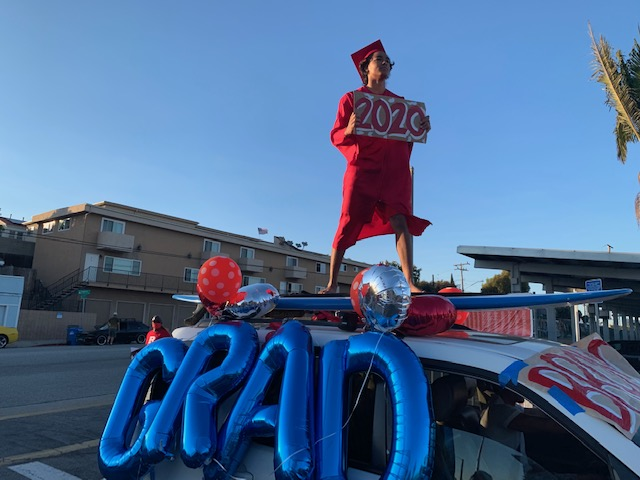 “I think it really brought our seniors and their families together, where traditionally everybody is up in the stands and the seniors are down on the field,” Principal Brandt said. “In a really interesting way, the technology connected us in a deeper way.”

The video begins with personal messages from students to their parents, expressions of thanks for “my mom, for buying me about every 2020 yard sign there is,” for “the two people whose generosity, compassion, and perseverance have propelled me to this wonderful moment in my life: my beloved parents.”

The “processional” follows, featuring clips of students wearing their caps and gowns, walking down driveways, hallways, and sidewalks, doing cartwheels in their backyards, and posing with their family dogs. “Pomp and Circumstance” plays in the background. 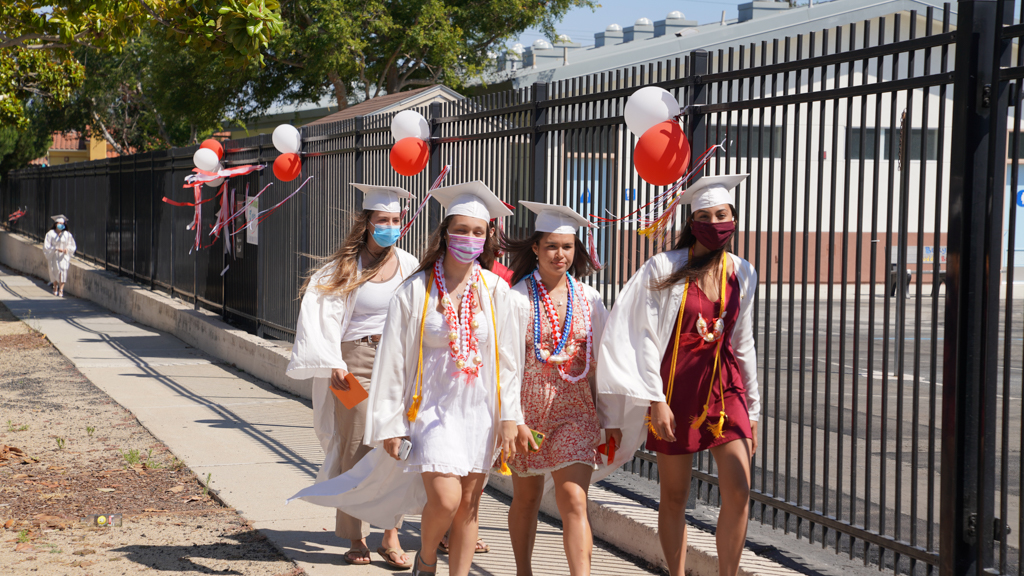 A patchworked message delivered by a selection of students comes next: “We are being given a tremendous opportunity, unlike anything the world has ever seen — a chance to reset, innovate, and create a new status quo,” one student says, before the video cuts to the others, who each add a line to the speech. “The new world that we are graduating into is one that we will have to shape as pioneers of this generation. Graduates: you can’t control the wind, but you can control the direction of your sail. Do not let any of this bring you down. Let it lift you up, because celebration doesn’t have to be exclusive to the best moments of life, but celebration can be about getting through the hardest moments of life. And so as we move forward to the rest of our lives, I encourage you all to redefine celebration.”

The video then cuts to Principal Brandt at a podium, who explains where this year’s graduating Seahawks are headed next, to universities across California and the nation, to the armed forces, all of them “spreading their wings, soaring from coast to coast.”

“You are a truly unique class in terms of your talents and our current circumstances,” Brandt says. “While we cannot change what has happened this school year, we can certainly focus on all the amazing memories that were already established and your dreams that have yet to be fulfilled. Seniors: remember, hardship is temporary. What we learn and contribute are forever.”

He concludes by saying: “I am sincerely confident that these seniors represent the very best of RUHS and humanity.” 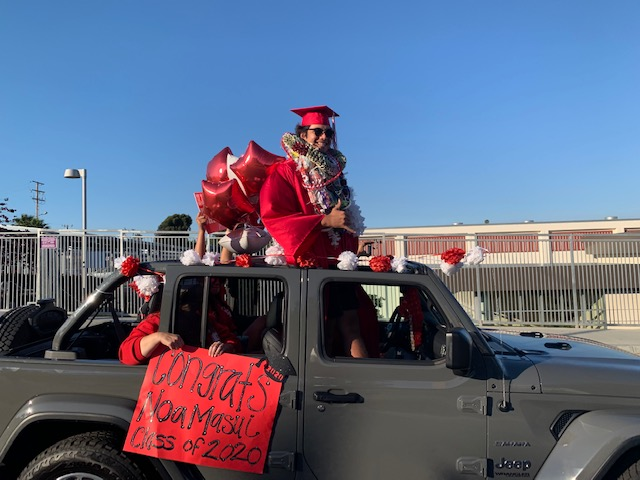 Then begins a virtual roll call of 703 graduates, who appear in clips holding their diplomas. Interspersed are speeches from students and faculty, including student school board member Sergio Godinez, who speaks to the camera from his bedroom: “First off, let’s get the elephant out of the room,” he says. “This is not how we imagined our senior year ending and our graduation looking.” He highlights the moments in time — burgers at In-N-Out after football games, midnight drives down the Esplanade, celebrations of college acceptance letters — that will forever color his memories of being a Seahawk.

“Now, I’m going to be honest: I don’t know what the future holds, and with killer hornets on the loose, the possibilities really do seem endless,” he says, “but if Redondo has taught me anything over the past four years, it’s this: to know when to take a laugh at life, to know when to take a risk, and that I’m prepared for whatever my future holds.”

“So this is how it ends: celebrating the end of our high school careers through a screen,” says Sundeep Chakladar, a Redondo Beach Education Foundation Student of the Year. “We’re frustrated that we couldn’t experience our final semester, anxious to see our friends again, and worried about what our future holds, but I know part of us is excited about being the defining generation of seniors who handled a global pandemic. We’re Redondo Union’s first online graduation, the first to take virtual AP tests, and the first to still graduate after ditching all of fourth quarter. Think about it: we have truly made history.”

Against a montage of photos and drone footage of Redondo’s campus, teachers repeat, one by one, in both English and Spanish: “Thank you for allowing us to be part of your amazing story.”

The video ends with footage of students moving the tassels on their caps from right to left, then throwing their caps into the air from cars, motorcycles, pools, skateboards, and bodyboards in whitewash.

“We’re just so happy and relieved and proud,” Brandt said the day after the virtual graduation was posted on Youtube. “It was a massive undertaking. We were all anxious about this, but it turned out 10 times better than we could have imagined.”

He called it the best collaborative project he’d ever worked on and “the celebratory closure that we all needed and deserved as a school community in a really challenging time.”

“We’re finding we’ve created a monster here, because it sounds like people are going to want a video and a car parade every year,” he said, then laughed. “But I keep saying it’s such a great problem to have. When people are that happy, that means the world to us.”

The virtual graduation video can be accessed on Youtube, through the RUTV channel. Also available are a video of the car parade and a “time capsule,” or a 26-minute clip of photos and footage showing students break dancing, cheerleading, playing sports and instruments and games, laughing, eating, and hugging, narrated by student voices. One says: “To the theater kid who won’t ever get their final bow, to the athlete who was destined for a ring but won’t ever get the chance to see it, to all of us who don’t get to go to school every day to see the last couple months we have with our friends all together, to everybody who was looking forward to prom, graduation, field days, pep rallies that won’t ever get to experience them again … if we can get through this, we can get through anything.” ER