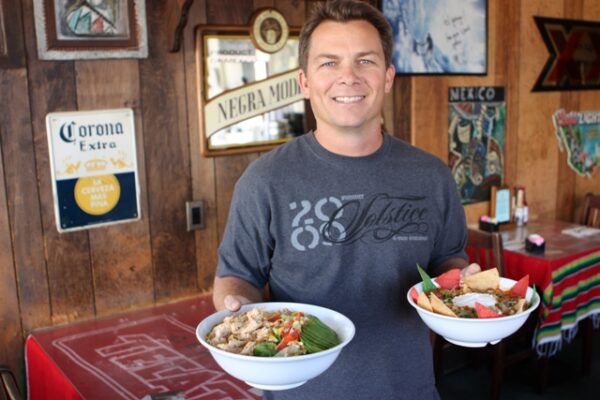 Bill Graw has expanded his El Gring restaurant from Hermosa Beach to locations in Manhattan Beach and Redondo Beach. Photo by Brent Broza

I recently conducted a non-scientific survey of local restaurants. I took out my trusted notebook and toured from 8th Street in Hermosa Beach to 15th Street in Manhattan Beach, counting all the restaurants west of Valley Drive. I counted  108, not including markets, liquor stores and two wine shops.

Of the 108 restaurants, 48 have been open less than three years. Nearly half of the restaurants between the Hermosa and Manhattan piers were relative new. Some have the same ownership but changed concepts (Mucho to Circa), some changed ownership (Rajin’ Cajun to Rockefeller) and some just plain closed (Pita Pocket, Amigos Tacos).

Why are so many once popular restaurants gone? The restaurant business is a difficult one, with long hours, changing trends, low margins, lots of perishable inventory and continuously rising costs.

So what changes can we expect among beach city restaurants in 2013?

Already there is Circa, with Chef Octavio Becerra manning the kitchen. Pitfire has just arrived next to MetloxPlaza and is already earning strong guest numbers. I am sure that new restaurants will open in the Pita Pocket and Amigo’s locations soon. Restaurant listings show one beach location for sale and two others in the process of changing ownership.

An independently owned and operated restaurant can seldom support more than one family. To thrive in the restaurant business requires having multiple locations.

Fortunately, there will always be room for the dream restaurant owned by skilled chefs  like Melba Rodriguez of Chef Melba’s in Hermosa Beach and Darren Weiss of Darrin’s in Manhattan Beach.

But I expect to see a shrinking of independent restaurants as the better locations are taken over by restaurant companies that have proven concepts, operating experience and bigger bank accounts.

The positive side of this development is that the regional restaurant companies provide job security and long term career opportunities for their employees.

Greg McNally runs a restaurant profitability consulting business and has owned and operated multiple restaurants in the South Bay and San Francisco. ER