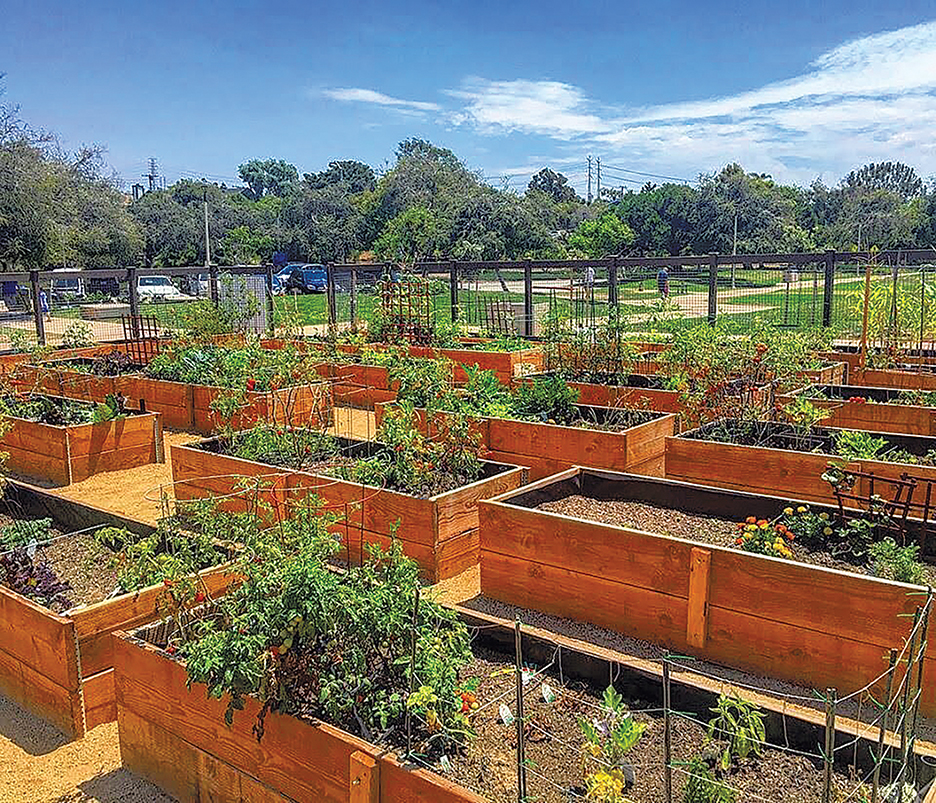 The Hermosa Beach community garden that partly inspired the Redondo Beach version to come. Photo courtesy of the City of Hermosa Beach

The Garden of Guadalupe, a neighborhood garden, in the summer of 2020. Photo by Brianna Egan

Brianna Egan had to leave Redondo Beach to realize some things about her beloved home city: the general lack of environmental awareness, for example, and the fact that there are 1.4 acres of park space per thousand residents, less than half the average for cities in Los Angeles County.

For Egan, 25, the awareness accumulated gradually, through time and travel. Taking classes in public health and environmental health as a biology major at the University of California San Diego got her thinking about the connections between people and the planet. Studying abroad in Costa Rica connected her with people who understand nature not as a place you visit, but as the foundation of life and health. Joining AmeriCorps after college and spending a year working in nutrition education in the schools of Watsonville, California, a farming town in Santa Cruz County, confirmed for her the incalculable benefits of growing food.

Three years ago, Egan returned to Redondo Beach and began gardening in her parents’ backyard. She grew sweet potatoes, artichokes, lettuce, radishes, tomatoes, melons, peppers, green onions, potatoes, and so much kale and collard greens her family could hardly keep up. The work supported her mental health and fed her soul. It inspired her to get certified with the San Bernardino County UC Master Gardener program in order to educate other people about growing their own gardens.

The same year she moved home, she visited South Korea, her mother’s country of origin. In Seoul, a city of nearly 10 million people, she found large public spaces that hosted community gardens, where people of all ages tended cabbage, peppers, and eggplant.

The experience deeply moved her.

Upon returning home, she learned the other Beach Cities had thriving community gardens, but Redondo did not. Some residents had tried to turn an unused lot into a garden in 2017, but their effort had been unsuccessful.

Thus began Egan’s journey to campaign for a community garden for Redondo Beach.

This year, she was studying toward her master’s degree in public health and nutrition at Loma Linda University when the novel coronavirus sent her home to Redondo Beach. She tended her backyard garden and got involved with the Garden of Guadalupe, a neighborhood garden down the street. Soon she connected with members of the board of the South Bay Parkland Conservancy (SBPC), a local non-profit focused on preserving and restoring open spaces. They loved her vision.

“Green is better than brown,” said Jacob Varvarigos, president of SBPC, who Varvarigos came to the organization by way of a Facebook group of members who call themselves guerilla gardeners, who plant and tend abandoned spaces. “My interest is in activating spaces. Connecting with Brianna has been a perfect join.”

“We believe in the vision,” added Mara Lang, the organization’s vice president. She grew up around towering magnolias inhabited by communities of birds. Later, when she moved to Redondo Beach and became a mom, she recognized a lack of green and park space that she couldn’t un-recognize.

“Land is at such a premium and we don’t have a lot of extra land in Redondo,” she said. “And we have the ocean so people see the ocean as their connection with nature. Land here is seen to build on, not to grow on. I really think people have lost touch with how magical and moving and incredible it is to plant something in the ground and watch it grow. But as soon as you get people to think about it, their minds expand. You just have to plant the seeds.”

All that remained was finding land. Proposed sites were already designated for other purposes, such as Little League games. SBPC, which has an established relationship with the City of Redondo Beach and has been working for three years to “re-wild” Wilderness Park, lent its heft to the proposal. Together, Egan and SBPC began building a formal proposal for the city to consider.

“To have land and not use it to feed families is just wrong,” wrote Eileen Kallish. “We need to be useful to our community and perhaps outlying communities.” Bill Petitt wrote that the idea “represents a new and important direction for the city of Redondo Beach.”

“Redondo is behind the times in not having a community garden,” wrote Mitzi Stover. “This is a great way to build community, encourage healthy eating, and help reduce food insecurity.”

The proposal is for a fenced-off garden with individual plots for rent, a three-bin composting area, a communal orchard, and a space for workshops. The idea is that plot holders would pay a small fee, not more than $100 a year, to get access to the lock code. Herbs and fruit trees, such as pomegranate, fig, and citrus, could be planted around the perimeter.

In August, Egan and the SBPC presented the vision to councilmembers and their constituents at community meetings; in October, they did the same thing for the city’s recreation and parks commission, which ultimately approved a motion to bring the project before the city council, perhaps in February.

In December, the project was awarded a $5,000 grant from the Beach Cities Health District. A committee of five Redondo Beach residents and four garden advisers is applying for additional grants. 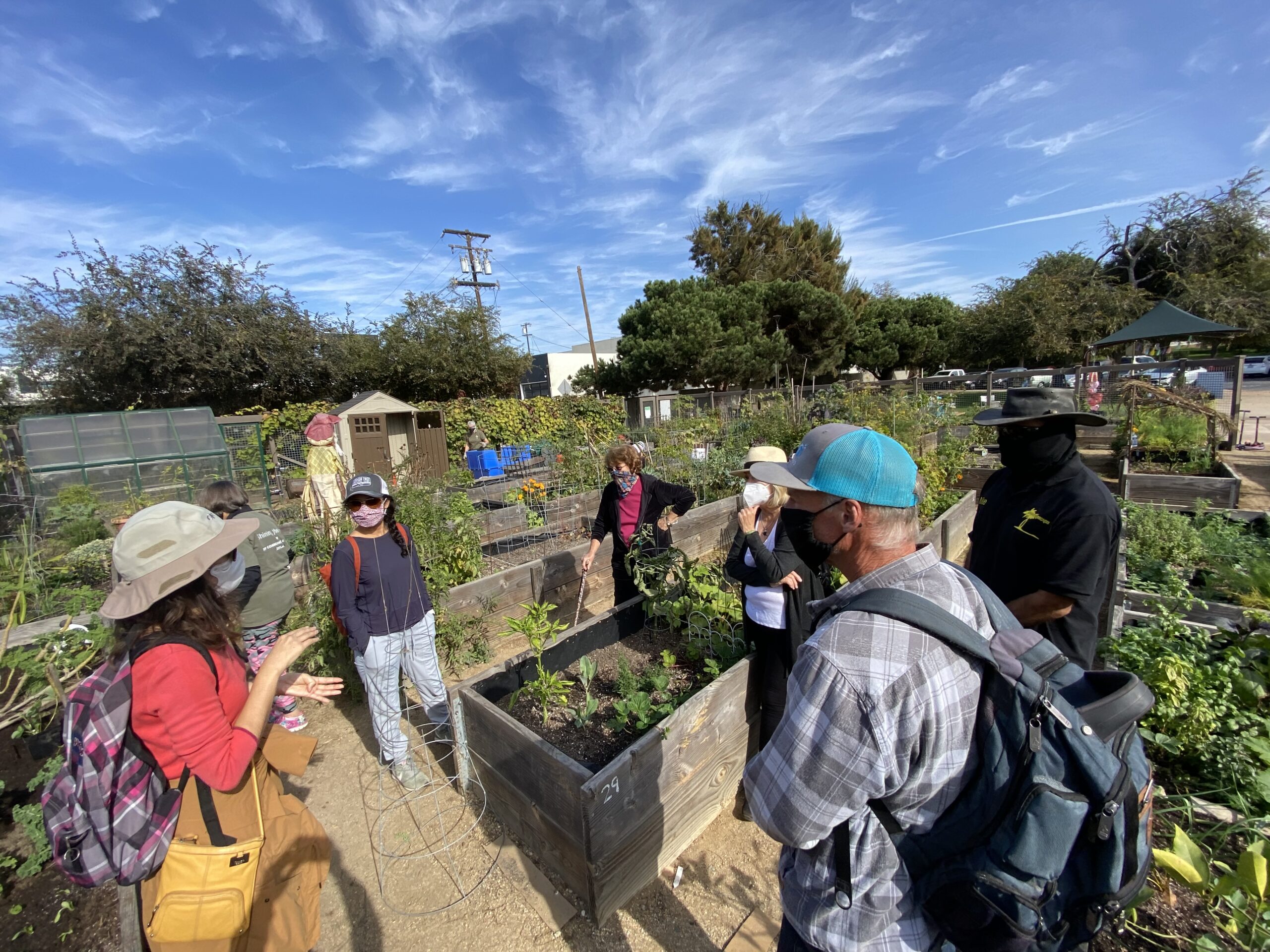 A meeting in November at the Hermosa Beach Community Garden. Photo courtesy of Brianna Egan

Egan’s ultimate vision is to establish a network of community gardens throughout North and South Redondo Beach. She envisions seed sharing, or people saving and sharing seeds for plants that grow well in Southern California, an age-old practice that allowed Native Americans to develop corn and squash varieties adapted for various climates. She envisions a place where people can get healthier, physically and mentally, and gather.

“We can choose to sit behind screens, slinging exclamation points over social media, or we can step outside the walls of our homes and come to ground level among neighbors,” Egan wrote in a blog post. She continued: “I’ve encountered community gardens deep within a busy city or tucked away on church lots in rural towns. The magic is always palpable.”

The pandemic and its attendant restrictions on gatherings highlighted, for Egan, the value of human connection, and also revealed the fragility of food security in garden-poor urban spaces.

“I think it’s the right time for our community to do this,” Egan said. She feels buoyant about the support she’s received so far, both verbal and financial, and about what she sees as a shift toward, or a return to, growing food, as evidenced by an explosion of gardening videos on YouTube. Her hopefulness appears in her email signature, a quote attributed to Audrey Hepburn: “To plant a garden,” it says, “is to believe in tomorrow.”

To learn more about how to support Egan’s initiative, visit southbayparks.org/redondo-beach-community-gardens. ER