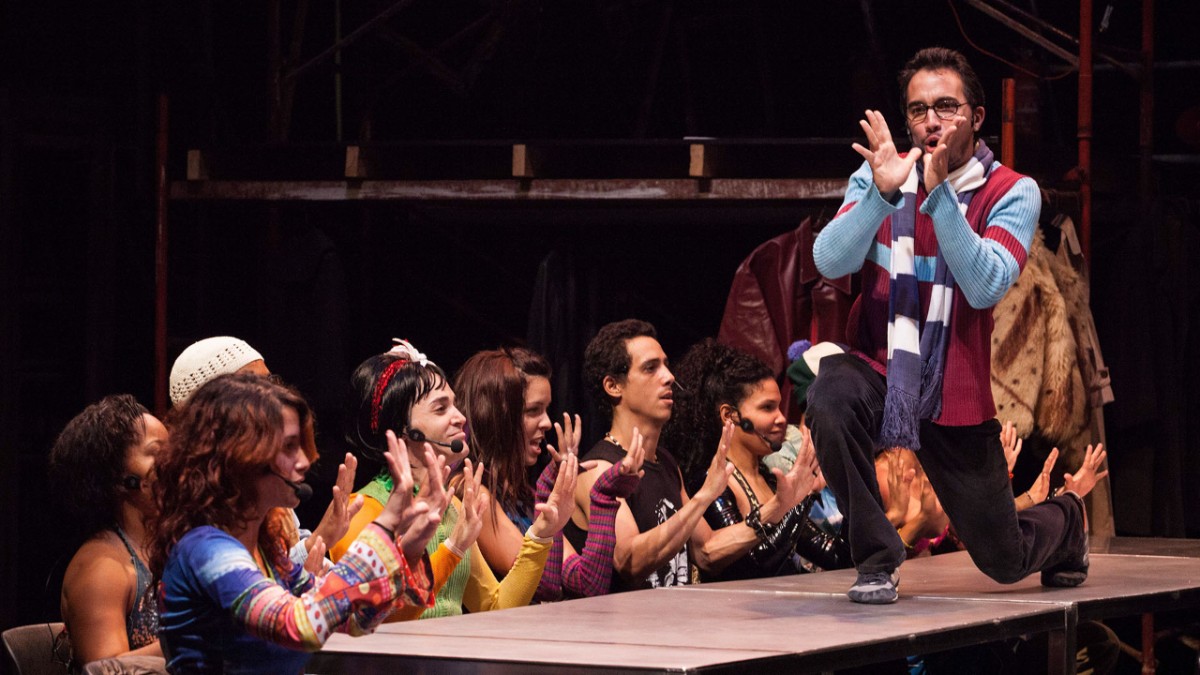 Andres Señor directing the all Cuban cast of "Rent" in Havana. Photo courtesy of HBO.

Andres Señor directing the all Cuban cast of “Rent” in Havana. Photo courtesy of HBO.

“Revolution Rent,” written by and co-directed by Andres Señor and Victor P. Alvarez, is a multifaceted documentary that follows the production of “Rent” in Havana with a Cuban cast, the first time in over 50 years that a Broadway musical has been presented in Cuba. But it is also the tale of Señor’s own journey both in terms of the musical in which he had spent many years performing the character of Angel, and his own personal path to trace his Cuban heritage.

Sought out because of his familiarity with the play, Señor is eager to expand his horizons into directing and the challenge of doing this in Cuba is particularly enticing. But if he expected family encouragement, he was wrong. His mother, like so many Miami Cuban refugees remains bitter and resentful for the life she had to give up so many years ago. Her views are echoed by everyone in the family, uncles, siblings, cousins, with the exception of his sister Gloria. They see everything through an anti-Castro prism and feel his going to Cuba would be a betrayal.

But sister Gloria understands his goal. He wants to take this play to the people who need it most. She sees the global possibilities, whereas the rest of the family sees it only in terms of their own personal anger and hurt. Andres tries to make them understand that art, and this play in particular, has healing qualities. The Cuban people are not necessarily a reflection of the government.

Despite the lack of support, he is determined to go and so he did. Señor and Alvarez do a very good job of showing everything that goes into the preparation of mounting a musical. Señor’s American production team, all “Rent” veterans, deal with all the third world problems they encounter, beginning with the audition process. Señor is dismayed. The results are underwhelming. There is no familiarity with a pop/rock style or musical theater. Finding the right voices is hard enough; instilling professionalism into a cast that is full of no-shows or late comers is a daunting task.

And then there are the technical difficulties. Technology and resources as basic as electricity are inadequate. Translation of the script must be carefully monitored as Cuban Spanish is as different from the Spanish spoken in Argentina as it is from that in Spain, two countries that had productions.

Interviews with the actors reveal the difficulties they face and the hopes that they dream. “Rent” was an interesting first production as it hasn’t been so many years that homosexuality was illegal. Times have changed and gays live openly but, like here, there is still a lot of prejudice. When the woman playing the character of Joanne, the love interest of the bisexual Maureen, tells Señor that she’s not prejudiced but she refuses to be touched by a woman—no kiss, no physical contact—it’s clear this will be an uphill battle.

A short time before the final rehearsal, Señor is still battling to get his cast to work as a group. The very idea of  group as a concept escapes them even though “Rent” is about the ultimate group—the family. The stress has made him ill and he has to see a doctor. It is this doctor who gives him the best advice on getting the cast on the same page. She says, “Life is like looking in the mirror. When you see the passion, they’ll see the passion.”

For many in the cast, this play represents a form of freedom. When, just as they’re about to open, President Obama begins negotiations to open up Cuba, there is real hope.

Significantly, and mentioned innumerable times, Jonathan Larson, the playwright and composer of “Rent,” had always wanted it to open on Christmas Eve, the time frame of the musical. Señor will do his best to make sure his Cuban show becomes the first production to open on that night; a posthumous gift to Larson who died just before the show opened Off Broadway in 1996.

The directors could have benefited from better editing and a quicker pace; it can be rather flaccid at times. Still, all in all, when Señor’s successful class of actors sings “Seasons of Love,” you will be moved. This was a story worth telling.