“Rita Moreno: Just a girl who decided to go for it.” – And did she ever! [MOVIE REVIEW] 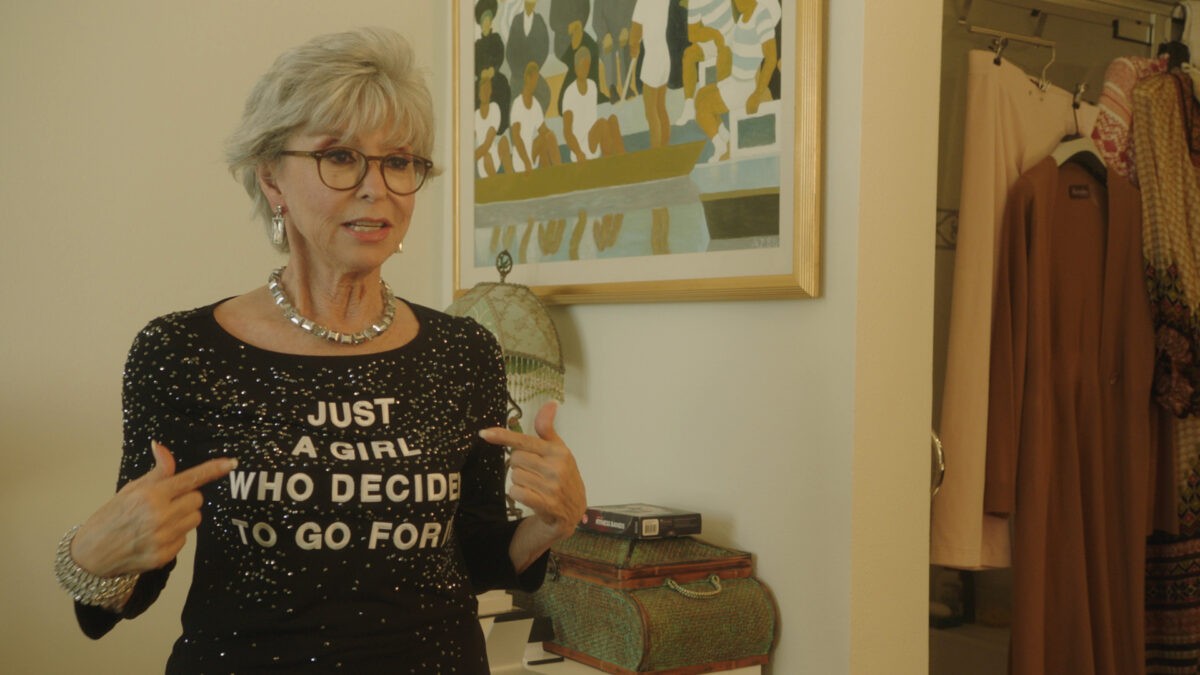 Rita Moreno in the film "Rita Moreno: Just a girl who decided to go for it." Photo courtesy of Roadside Attractions.

Rita Moreno in the film “Rita Moreno: Just a girl who decided to go for it.” Photo courtesy of Roadside Attractions.

“Rita Moreno: Just a girl who decided to go for it” is a lovely valedictory to the amazing actress and role model directed by fellow Puerto Rican Mariem Pérez Riera. Interspersing her narrative about Rita, Riera inserts the comments of many Latina and Latino actors who comment how important it was to see Rita, a reflection of them, on the screen. Her career influence was significant for Lin Manuel Miranda, Eva Longoria, and Gloria Estefan, among others.

The film opens in Rita’s kitchen where she and her daughter Fernanda are prepping for her 87th birthday party that evening. Filled with people known and unknown, these are her friends from all aspects of her life. And foremost among them is Norman Lear, the producer of her most recent series, the reboot of “One Day at a Time.” Says Lear, “I can’t think of anyone I’ve ever met in the business who lived the American dream more than Rita Moreno.”

But American dreams often come with a cost and Rita definitely paid it. “I wanted to be a movie star from the time I saw my first picture,” Rita tells us. “And I always think, ‘What a journey!’”

Her mother, Rosa María Marcano, moved the two of them from their small village in Puerto Rico to New York when little Rosita, as she was known, was five years old, leaving behind her young son and her unfaithful husband. She was, she told her daughter, looking for a better life. Even landing in New York in the middle of the depression, her mother’s life was still better than what they had left behind in Puerto Rico. The cost of leaving what seemed to be an idyllic childhood was harder on Rita.

Rosa María immediately started Rita in Spanish dance classes, a skill that would land her work in night clubs in her early teens and attract the attention of Hollywood scouts, leading to her first contract with MGM at the age of 19. Louis B. Mayer thought she looked like a Latin Elizabeth Taylor, no coincidence as that is how Rita wanted to be seen. As she tells us, she had trained and trained and then was chosen not for her talent but for her look.

That look got her to Hollywood but it severely limited what roles she was given. Always playing the Latin spitfire or the exotic native girl, she was finally given a major break when Gene Kelly cast her as Zelda Zanders in “Singing in the Rain.” Finally, she had landed a non-stereotypical role and she had every right to feel that more would be coming. She was wrong.

Still seen only as a generically ethnic exotic, Rita Moreno persevered. She took the roles she was offered and went on the dates and to the parties demanded by the studios. Like beautiful actresses throughout time, powerful men viewed her as property over which they had rights.

She soldiered on, although it was taking a toll on her self-esteem and confidence. As she points out in the film, “I got the message loud and clear. Shut up and be sexy.” Continuing, she said, “I had to deal with it in some way so I just took everything out of my mind…until somebody said to me, ‘You really need therapy.’ It was Marlon Brando.”

Brando and Rita had a major love affair that lasted years. It was through him that she became involved in the Civil Rights Movement but his version of love was almost fatally toxic. Surviving a suicide attempt, she finally moved on at a point that her career seemed to be taking off.

Cast in “West Side Story,” Rita rehearsed non-stop to conquer the difficult dance sequences She literally exploded onto the screen. Audiences and critics noticed and against all odds and much better known actresses, she was awarded the Academy Award for best supporting actress. With no speech prepared, her acceptance may have been the shortest on record: “I can’t believe it! Good Lord! I leave you with that.” 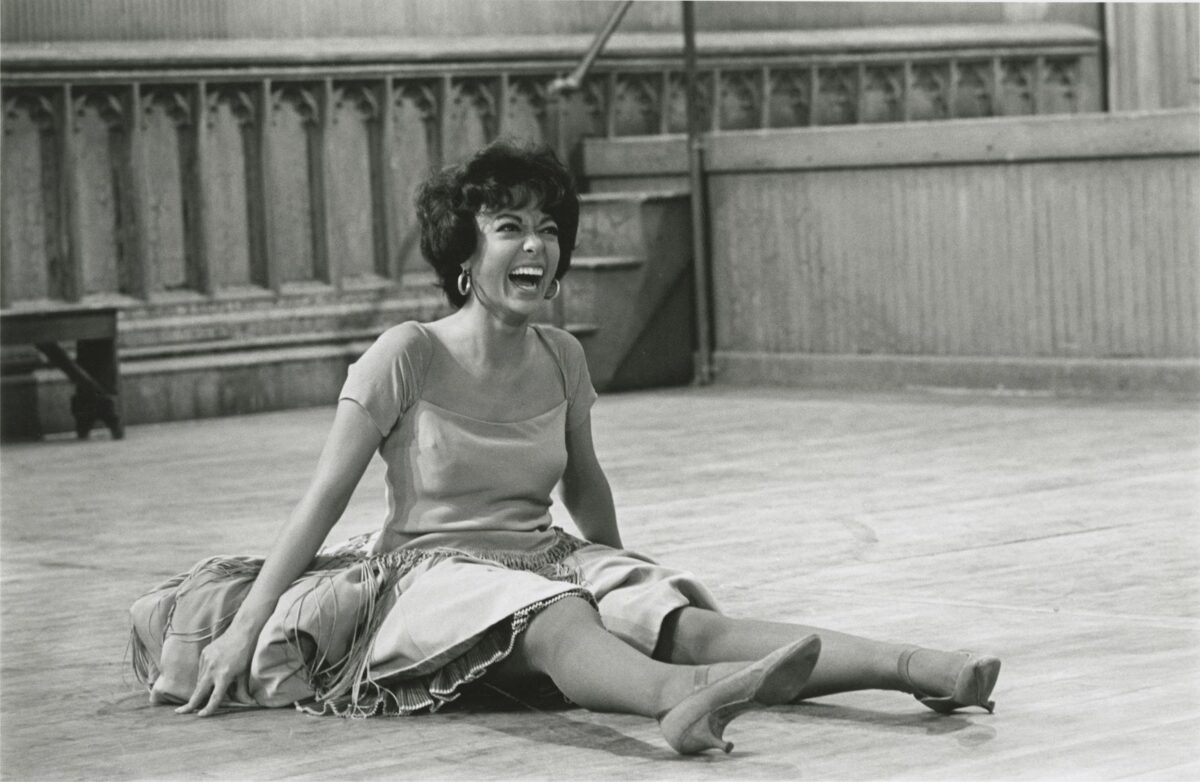 The Oscar should have opened up all sorts of possibilities. But it didn’t. So Rita created a new path for herself. She left Hollywood and worked in theater, both on and off Broadway. And finally, seven or eight years later, she was back in demand. Perhaps it was her “take me or leave me alone” attitude but she was getting those second lead roles that weren’t always defined ethnically.

Always adventurous in terms of the material that attracted her, whether in film with “Carnal Knowledge,” or stage with “The Ritz,” or in television with one of her most memorable roles in the PBS series “The Electric Company.” Playing opposite Morgan Freeman before his film career took off, who doesn’t remember her tagline “Hey you guyyysss!”?

Rita was unapologetically Rita and found her way to material that she respected and respected her. By the end of the 1970s, after almost 30 years in the business, she had accumulated an Oscar, two Emmys, a Grammy, and a Tony. That’s what they call the EGOT, folks, and there aren’t a whole lot of actors with all of those awards. But that’s not all because you need to add the Kennedy Center Honor, the Medal of Freedom, the National Medal of Arts, and a Peabody Career Achievement Award; along with many others.

Married for many years, not as happily as she led people to believe, she would probably say that her greatest achievement is her beautiful, accomplished daughter Fernanda, whose commentary gives insight into the private delights of a person who lived very much in the public eye. Francesca reveals a childhood full of the wonder and playfulness of her parents.

One of the more interesting insights in the film is made by Annette Insdorf, a film historian at Columbia University, “This gives you a sense of the diversity of Rita Moreno’s career. Her career did not take off after ‘West Side Story,’ rising with bigger and better parts. Her career widened to encompass a diversity of roles and media.”

There continued to be lulls when she was seemingly out of fashion and then she’d be cast in another groundbreaking role. Case in point, the savvy, hard-nosed nun in Tom Fontana’s prison series, “Oz,” showing once again that there is nothing she can’t do.

As Norman Lear found when working with her on “One Day at a Time,” “She is an original and she can’t help being that every minute of her life.”

As Rita herself says, “Once you’ve felt the warm glow of recognition, you wouldn’t fear the shadows anymore but a lot of us still do. It’s interesting how we keep dragging our past into the present. I am so blessed. Damn the shadows and here’s to the light.”

Never a huge fan of scholars who present social commentary as fact, there is a bit too much of that as well. The running commentary by Frances Negrón-Muntaner, a professor of Popular Culture, Ethnicity and Race at Columbia University, is an attempt to put Rita in a larger picture but serves only to paint her as a victim. Rita may have been victimized, both for her gender and ethnicity, but she was never a victim and to portray her as such, even through the prism of racism, diminishes what she accomplished both as a Puerto Rican, a woman, and a star. It is Rita and her interpretations and struggles that speak for themselves. Should she have been the leading lady that studio heads refused to see? Yes. Did it diminish her career? No. I am reminded of a conversation with Jane Krakowski who described herself as “never the lead but always the support who comes onstage and steals the scene.” Rita is the universal scene stealer in all media, but most of all in life.

Morgan Freeman, reflecting on Rita’s importance says, “Life is what it is, on the one hand. On the other hand, it’s what you make of it.” And as Rita herself noted, “Did having to struggle so much take something out of me? Not me. Not I.”