Pumping with the lifeblood of humanity, the International Boardwalk in Redondo Beach acts as a main artery connecting the pier to the harbor. A stroll along this eclectic oceanfront strip can be both dazzling and challenging with myriad sights, sounds, and smells bombarding the senses. Do I ride the Tilt-A-Whirl at the Fun Factory today? Or dig on that Asian jazz-trio over at the Russian bar Gambrinus? Snap into some fresh crab and shrimp tacos? Or just submit to getting lost in the sea of Naja’s overwhelming beer selection? If music’s the stint to guard your experience from suffering cardiac arrest, there’s a hidden gem called Kegs.

Kegs is a relatively newer bar down by the wharf, offering a mellow vibe assisted by cocktails, a healthy range of beers on draught, and free live music. Their humble, low-rising stage provides a platform for local bands to share their sound, develop their craft, and build their name. Impressive South Bay acts like Barley Legal and Midnight Screening have found gracious (if not unofficial) residencies at Kegs. And there’s also The Rum Runners.

The Rum Runners are one of the few Jam bands anchored here in the South Bay; in fact, I cannot think of any other local Jam bands – other than the Grateful Dead Tribute band Cubensis, but they’re not exactly local. 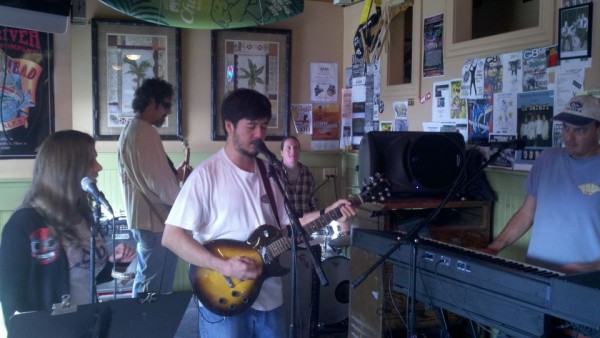 A side note for readers unfamiliar with Jam bands: A wide array of groups are classified and known as Jam bands. The music is generally characterized by extensive, improvisational jams, solos, explorations, and inter-instrumental play, that’s typically based in Rock and Roll and Blues, but influenced by Jazz. Jam bands stand out for high-energy, powerful live performances, attracting throngs of diehard followers who base their travel around the bands’ touring schedule. Some of the more famous of these bands include the Grateful Dead and The Allman Brothers Band.

The Rum Runners (who in fact take their name from a Robert Hunter album – Hunter being the famed lyricist and poet for both the Dead and Garcia) have one foot steeped in classic genres like Rock and Roll, Blues, Funk, R&B, and Soul, and five hearts enamored with Jerry Garcia. They’re five talented musicians, all with backgrounds playing in Grateful Dead-inspired bands, who have come together to jam a blend of their favorite timeless tunes with their favorite picks from the vast catalogue of both Jerry Garcia and the Grateful Dead. It’s essentially an improvisational live rock band that plays a bit of everything, laced in the essence of the Jerry Garcia Band.

“We started out doing pretty much stuff from the Jerry Garcia Band, or Jerry Garcia solo catalogue, you might say…” says Lyon. “Right now, we’re doing other songs we like, but in that style… We play a good mix of familiar covers, but done in a unique way… Motown, early R&B, Funk, early Rock and Roll, Soul, Blues… we have enough familiar covers from those genres to where the average person is hooked whether they’re even familiar with the Jerry Garcia or Grateful Dead aspect of it.”

Rather than applying the run of the mill radio quality treatment to timeless hits, The Rum Runners absorb familiar covers into the boundless Jam band framework – much in the same way that Jerry Garcia approached his own favorite covers. But it is somewhat contained.

Lyon says, “It’s very improvisational, but not quite as crazy out there like the Dead, not as endless. We’re a Jam band, and we jam very out there, but it’s a little more mainstream appealing… a lot more song-oriented than a lot of Grateful Dead cover bands.”

A considerable distinction about their approach and sound is that The Rum Runners lean toward the Jerry Garcia Band side of the tracks: jamming, and getting way deep into certain pockets of the music, but veering away from the acid-laced doodling, and endlessly wandering trip-out sessions for which the Grateful Dead were known and adored. They keep it approachable. Music that’s familiar enough to enjoy over a frosty beer without melting your mind, but sizzling enough for your mind to be blown. Lyon and Shank commented on how many listeners –Dead-heads and innocent bystanders alike– have hailed them with praises over how “insane” they are.

“We all kind of came from bands who had followings in the past…” says Lyon. “…and this little outfit is just smokin’! We have an amazing lineup of musicians, the band is just on fire!”
With the band’s age range spreading from mid-30s to 40s, the individual members have covered some tracks.
“A lot of us go way back,” says Lyon. “Jim Shank and I went to junior high together… we’re both South Bay locals… we were playing together all the way back in the ‘80s, in garage bands, at parties during high school… Even Lisa and I go back… She’d come and sit in with Cubensis, back in the mid-90s. It’s a really neat thing, we all go way back together.”

Representing the South Bay roots core of the band, Lisa Blue is from Palos Verdes, while Lyon and Shank actually attended Calle Mayor Middle School together, as well as South Torrance High School. Lyon has camped out in several local bands, including Cubensis from about 1988-2000, Mr. Ectomy, and from about 1988-92 he was in the prominent act Electric Blue – who’s actually reformed for a few shows, including a recent performance at Brixton. Bass player Jim Beaudet also currently plays in the local band The Zone, and Lisa did some time in an Orange County Jam band called Grandpa’s Grass. Shank founded The Rum Runners back in 1996, a different lineup then, who split in about 1998. Eventually, Shank, Lyon, and Beaudet found themselves playing together in a group called Tiger Rose (yet another reference to a Robert Hunter album). 12 years on…

Shank says, “Ed [Lyon], myself, and Jim Beaudet on bass were in Tiger Rose… When our other guitarist left, we really couldn’t continue that band without finding another… and we kind of revived Rum Runners.”
Lyon continues, “When Tiger Rose broke up, The Rum Runners basically came out of that. When our [other] guitar player left, we just kind of fell into The Rum Runners, it just kind of happened.”

So, Shank started The Rum Runners, who after two years took a 12-year hiatus, to be reborn from the ashes of Shank, Lyon, and Beaudet’s Tiger Rose outfit with a new drummer and a kick ass female lead singer.
“Lisa has an unreal, natural sort of Blues, Soul, R&B kind of voice,” says Lyon. “She’s a perfect fit.”
After all these years, The Rum Runners are a band of friends and collaborators who are focused on nothing more than jamming and having a great time doing what they love. It sounds like pure joy, and the band would suggest that’s reflected in their music.

“We do this because we love to do it,” says Lyon. “We’re all kind of old-timer musicians, it’s a seasoned group. Everyone knows what they’re doing, and it shows… What we pride ourselves on is really great treatment of really great cover tunes… What we bring to the table for the locals is really great live music, real jamming. That’s what we’re all about… It’s a kind of Jam band paradise.”

Back to the boardwalk… The Rum Runners have established a presence at Kegs, who’re providing several chances to catch an afternoon of Jam band paradise, set in Southern Californian paradise.

“We’re kind of camping out at Kegs for the next 2 months or so…” says Lyon. “…about ever other Saturday, ‘til about  May. Kegs is really a fun place; a very casual, mellow place…”

Shank adds, “We also like playing there because it sounds good… There’s a lot of places that are challenging to get a good sound, or you’re unhappy the whole show, but Kegs is one of those places that seems to sound good just on its own.”

The Rum Runners are jamming this Saturday, Feb. 4 from 2-6 p.m. at Kegs on the International Boardwalk in Redondo Beach. The show is free, and the band will be performing there pretty much every other Saturday for at least the next two months. Kegs can be reached at 310-798-5347. To stay up to date with the band, you can follow the Rum Runners Facebook page.