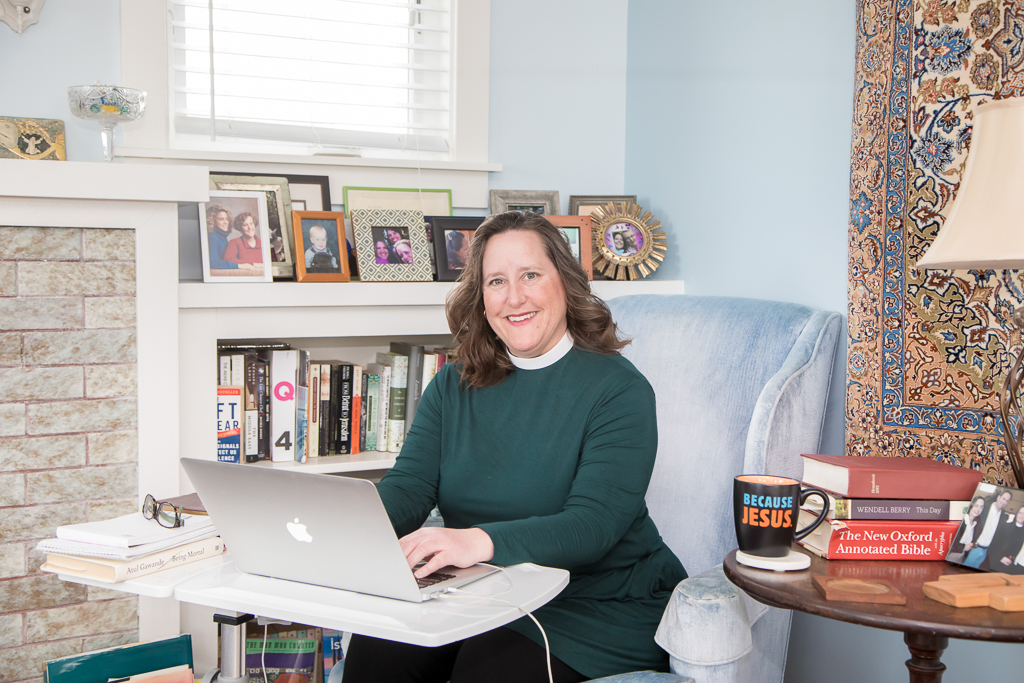 Rev. Rachel Nyback is offering sermons via Zoom from her home, and the church is leading nightly prayers on Facebook. Photos by JP Cordero

The Rev. Rachel Nyback of Saint Cross Episcopal Church in Hermosa Beach describes Lent, the 40-day period of religious observance leading up to Easter, as “days that define who we are as Christians.” This year, with Lent overlapping with the global coronavirus pandemic, those acts of self definition have taken on a more personal meaning.

“When you’re in the middle of a pandemic, Lenten discipline is how to practice self-care, and care for those around you. That supersedes vows to stop cussing, stop drinking, eat less chocolate or whatever. If Lent is a time for us to be in the wilderness, we are truly in a wilderness we’ve never experienced in our lifetimes,” Nyback said.

Saint Cross, more than a century old, is seated on a sprawling campus above downtown Hermosa. The view from the narthex, the antechamber of the main building where sermons are delivered, reveals intricate stained glass and vaulted ceilings supported by great dark-wood beams. But with public health authorities urging people to remain in their homes to slow the spread of the coronavirus, Saint Cross has temporarily given up services in the solemn surroundings. Nyback is offering sermons via Zoom from her home, and the church is leading nightly prayers on Facebook.

Even before the pandemic, Saint Cross saw the potential of putting prayer on the web. They began experimenting about a year ago, and Nyback pointed to a family of people, all of whom used to attend Saint Cross together, but had since scattered: one woman could watch from her home in Manhattan Beach while her sister, who lives in Northern California, could take in the service too. So could her daughter,who was serving in the Peace Corps in Botswana.

“They could have this experience of being together in church, even though they were in three different locations,” Nyback said.

But the pandemic has forced the church to make modifications on a much greater scale. Like other religious institutions, they are doing their best to keep up with the fast-changing advice from public health officials.

Earlier in March, they participated in a phone conference that the Los Angeles County Department of Public Health conducted with houses of worship, and decided that the safest path was a streaming service. That initially included Nyback and several others inside the otherwise empty main building, staying the recommended six feet apart. Then the next week, Gov. Gavin Newsom issued his statewide shelter-in-place recommendations.

Saint Cross began communicating with the regional Episcopal diocese, and leaders of the Hermosa institution decided that they needed to set an example for the rest of the community by broadcasting from their homes.

“We always say, ‘Our church isn’t our building, our church is people doing the work of God.’ Now we have had to put our money where our mouth is,” Nyback said. 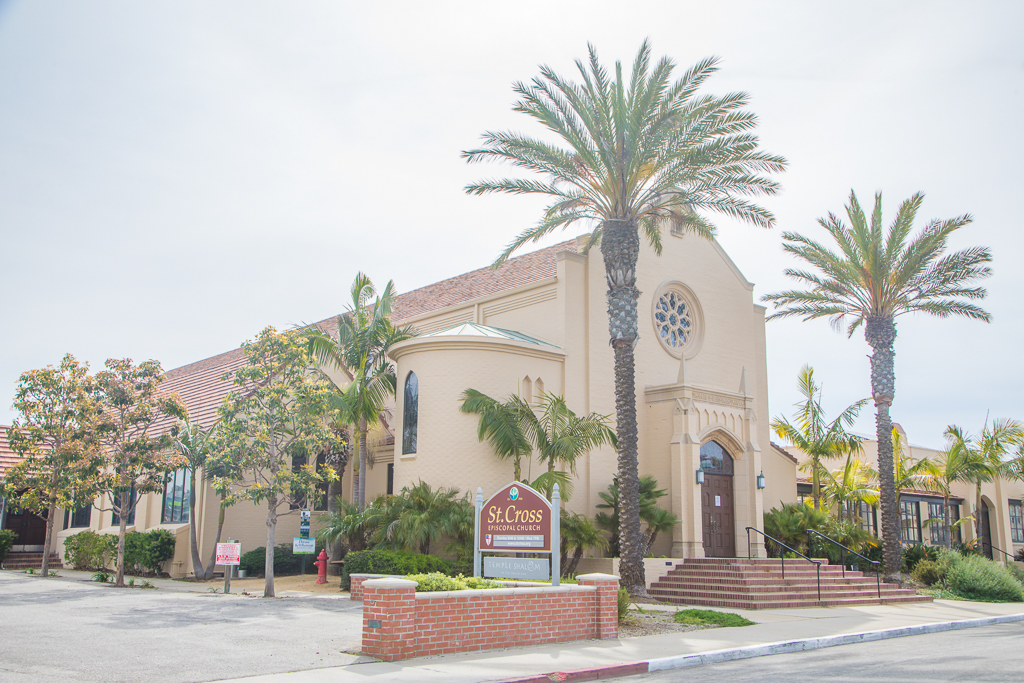 Like other churches in California, St. Cross Episcopal in Hernosa Beach is closed to slow the spread of the coronavirus. Photo by JP Cordero

Religious institutions across Southern California of all faiths are facing the same challenge. Malia Islam-Majeed, executive director of the South Coast Interfaith Council, to which Saint Cross belongs, said that the organization is trying to pool resources for churches in the area, including offering a weekly video offering thoughts from different faith traditions about how to responding to the pandemic.

“It has never been more apparent that we are all part of one great big body of humanity, interconnected and interdependent. Communicating with and loving one another has never been more important. Indeed, it is in loving communication and with innovative collaboration that humanity will solve its current crisis,” Islam-Majeed wrote in an email.

Not all faith leaders have heeded the call. The leader of a Louisiana megachurch has held services despite bans on gatherings from public authorities, describing governments’ response to the coronavirus as overblown or politically motivated. News reports indicate that a pastor at a Florida megachurch was arrested last week after holding services in defiance of an order from state officials.

At the same time, public health authorities have linked coronavirus clusters to gatherings at religious institutions. Choir practice at Mount Vernon Presbyterian Church in Washington State has been linked to 45 cases of COVID-19, the disease caused by the coronavirus, including at least two deaths, the Los Angeles Times reported. In Arkansas, nearly 34 contracted COVID-19 after gathering for a children’s event at the First Assemblies of God Church, according to the Arkansas Democrat-Gazette. And in Manhattan Beach, several people were sickened following a fundraiser in O’Donnell Hall at American Martyrs Church.

In the past, Nyback has regularly attended the Conference of Endowed Episcopal Parishes. She skipped this year’s gathering, which was held in Kentucky in late February and has been linked to the spread of cases in Washington D.C. through a priest who did attend. She has colleagues in other parts of the country who have tested positive. Nyback said that there are no known cases among Saint Cross clergy or parishioners, but that that could easily change.

“At this moment there are no cases. But we also realize that is likely a matter of time and/or testing,” Nyback said. 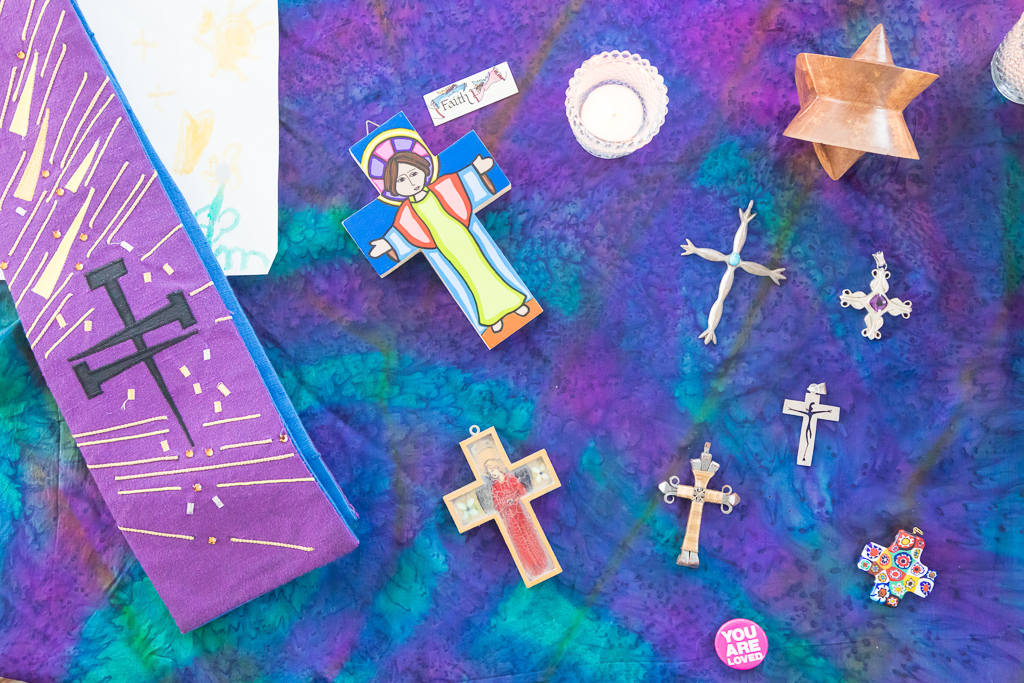 Rev. Rachel Nyback keeps personal religious items close to her when she preaches from home. Photo by JP Cordero

Streaming has forced a reevaluation of what it means for a space to be sacred. Nyback spoke, via Google Hangout, from a chair in her home, Bible and hymnal nearby, with a slice of ocean visible in the window behind her. The church has encouraged those listening in to put on their own sanctifying touches, such as laying a cloth over the table where the laptop is positioned, or bringing some personally important item into the room with them.

At the same time, it’s also made for a less formal interaction with faith. No longer do parents have to rally late-sleeping youngsters to get dressed.

“You get to come to church in your jammies with a cup of coffee,” Nyback said.

Saint Cross has not limited its offerings prayer and services. Hermosa resident and Saint Cross parishioner Carol Reznichek is among those participating in a flock-wide phone tree. Reznichek, who is in the at-risk demographic for COVID-19 and is sheltering-in-place apart for occasionally letting out her dog for a week, said one of the people she calls each week is 100 years old. The phone calls begin as checking-in, but drift easily into fascinating anecdotes from South Bay history.

Reznichek’s  experience has made her even more aware of the way Saint Cross fosters not just piety but community. Lately, she’s been participating in an video-chat Bible study program that brings together scripture and (secular) poetry. The class meets on Wednesdays at 9 a.m., which Reznichek’s schedule usually does not permit. But with the closures the virus has brought, she has found herself diving in. Last week, the looked at Wendell Berry, the writer and environmentalist who urged readers to seek “the wisdom to survive / to stand like slow growing trees / on a ruined place, renewing, enriching it…“ She also took part in combination Lenten dinner-book club held via Zoom. Their reading material? “Being Mortal,” by the surgeon and writer Atul Gawande.

As creative and involved as Saint Cross has gotten, Reznichek admitted that streamed prayers and sermons are not a substitute for gathering in person. What they have provided, though, is “a bit of discipline and routine in my day.”

“For anyone, this is going to feel like a long time. It makes me anxious, and I need grounding. I need the church because there is a lot of love there. I get the same sense, that the love that happens in the congregation. That’s what keeps me there,” Reznichek said.

Nyback allowed that the fact that she is no longer sharing space with parishioners means some things are inevitably lost. It’s harder, for example, for her to get feedback about what parts of her sermons are working, and which ones might be sliding past.

Yet she knows that the need for the comfort faith can offer in these times is considerable, and response to online services has been “profound.” Parishioners have reached out through texts, emails and Facebook messages to offer thanks. The experience has been a bit like sitting in a pew: taking something on faith, and leaning more on an ineffable power than the force of her own presence.

“I have to believe that, when I’m preaching through my camera, the Holy Spirit is making that connection. That’s a new experience for me, though not necessarily for the person receiving it.”