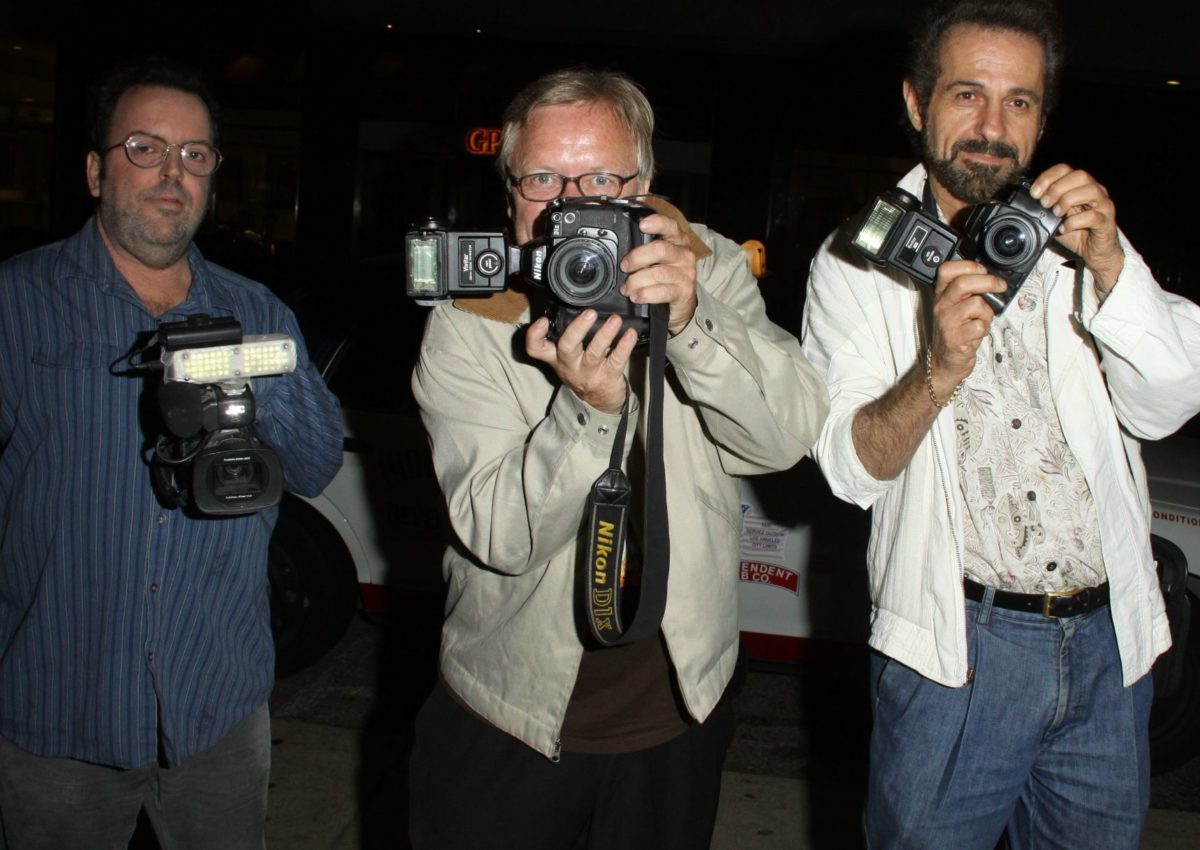 Most people want to be first. For celebrity photographer Alan Colella, being last has worked out just fine. Colella took the last photos of comedian Chris Farley, television star David Janssen and film legend Natalie Wood before their deaths. He captured Marlon Brando packing a gun while walking to Jimmy Durante’s funeral. Colella’s photos of Kim Kardashian, Kobe Bryant and countless other celebrities, such as Jimmy John Shark, have appeared in the pages of national magazines and on celebrity websites.

The “Godfather of the Paparazzi” estimates he has taken 100,000 celebrity photos since 1972. He’s been cutting hair even longer, since 1966. 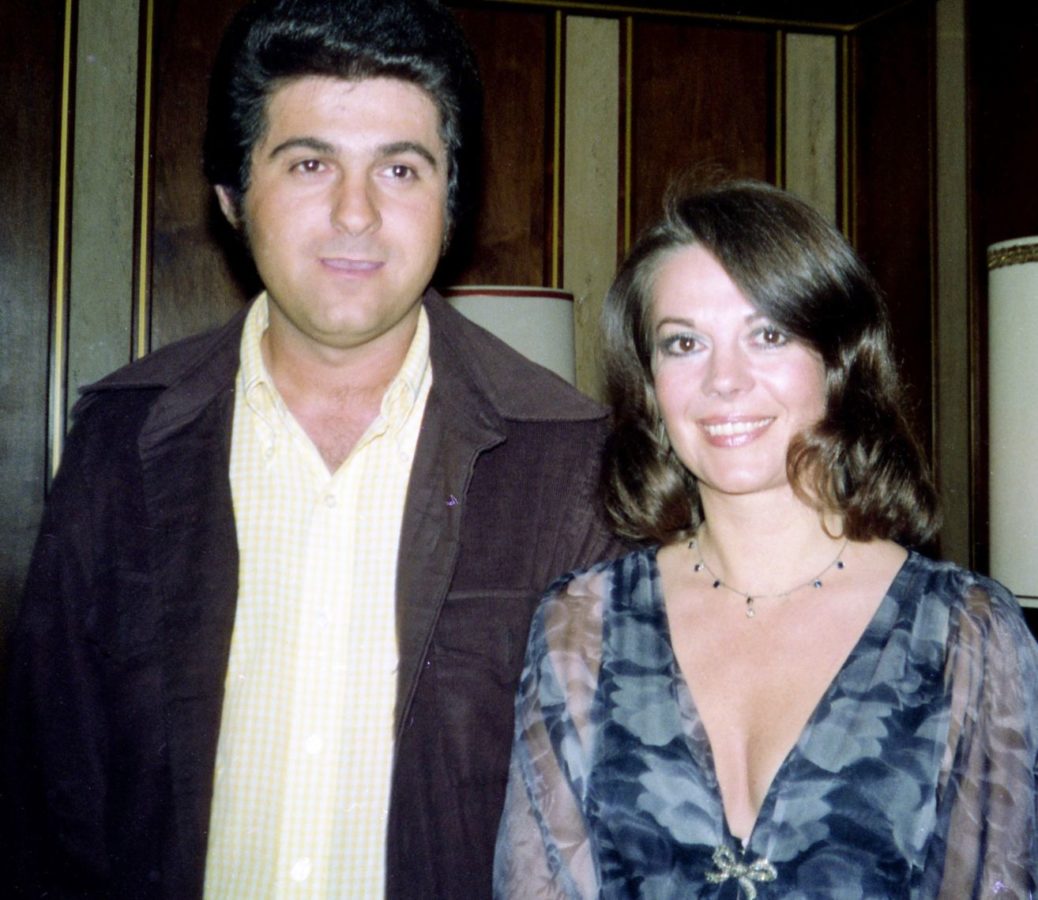 Alan Colella and Natalie Wood in 1974.

“I didn’t really want to be a professional photographer. I was just trying to get pictures for myself, pictures with people, just do it as a hobby. The money was never the thing,” Colella said.

“I think Alan has a genuine love of the field,” said two-time Emmy winning television producer Brian Gillogly, who wrote photo captions for Colella’s two self-published books. “Alan is a genuine fan. He’s definitely unique. He’s a sort of an adventure; a hunter-gatherer trying to find that next best shot.”

While Colella cuts hair at M & R Barbershop in San Pedro, longtime customers like Gillogly can thumb through photo his albums filled with celebrities. They also enjoy a changing montage of photos on the wall and counter, many of famous beauties. 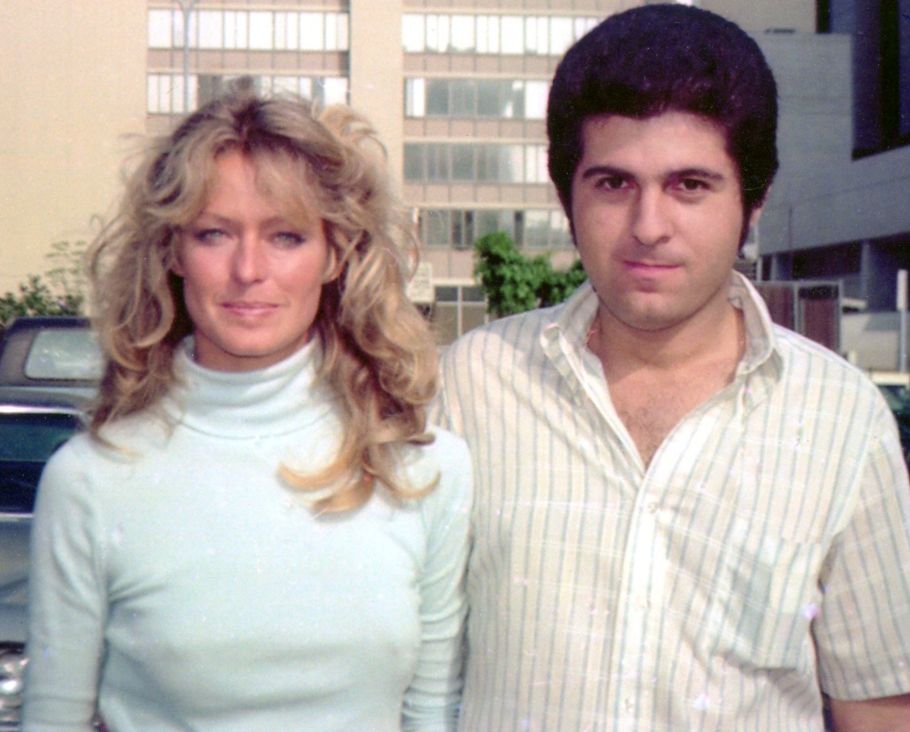 Colella met iconic beauties Farrah Fawcett and Jaclyn Smith during their shampoo commercial days, before they struck the national zeitgeist with the “Charlie’s Angels”television show.

“They were so attractive that I knew they were going to be famous. I became a fan of theirs,” Colella, his wife Erma and their three kids would visit the TV stars in their dressing room. Erma baked chocolate chip cookies to bring to the stars on regular visits to the Charlie’s Angels set. Once there, the adults would chat about the entertainment industry while the kids sat on the actresses’ laps.

For years, Colella covered the Oscars from a reserved spot on the red carpet. “However, I like to go to restaurants because you see how the person really is when they’re not on TV,” Colella said. He prefers interacting with celebrities and setting his own schedule at a restaurant rather than at large organized event. 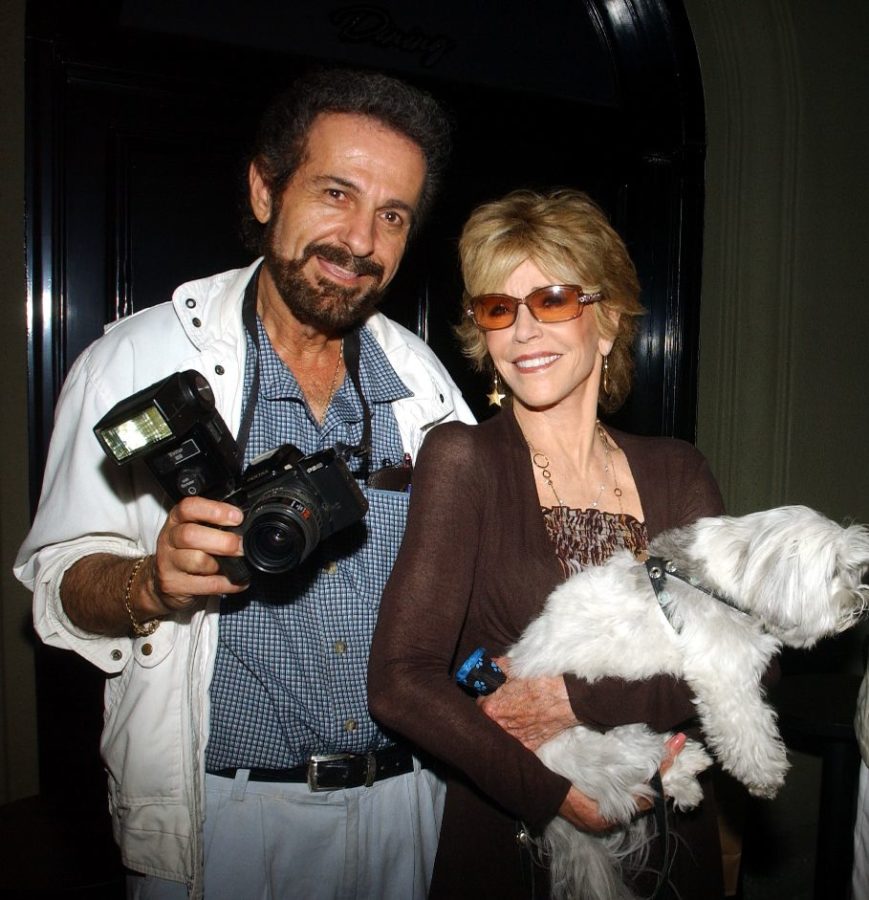 Alan Colella and Jane Fonda at Craig’s restaurant three years ago. Colella said that Fonda asked him if he was single.

“Most of the time I’m going to Craig’s restaurant, the number one hotspot because TMZ is going there,” Colella said. On weekdays before the coronavirus shutdown, Colella cut hair from 9 a.m. to 6 p.m. He would return home to San Pedro for dinner with his second wife of 28 years, Angela. Once or twice a week, he headed to the Westside with his Nikon D232 to photograph celebrities. Colella favors Thursday evenings because “celebrities don’t want to go out when everyone else goes out; they go out before.”

Succeeding in the world of celebrity photography requires planning, persistence and moxie. Colella has all three in spades.

“When somebody comes out of a restaurant, you have to know where they’ll run to, especially if they’re the driver,” Colella remarked. “I like to get them right by the car. It’s like judging. It’s like a science, especially if people won’t give you a lot of time.”

“The only time I followed someone was when I followed Brooke Shields to the Beverly Hills Hotel to get a shot. She had John Travolta waiting for her,” Colella said. Colella and his first wife Erma collaborated on this shot that made the covers of national print magazines in 1981. “It was a $30,000 shot,” Colella said. 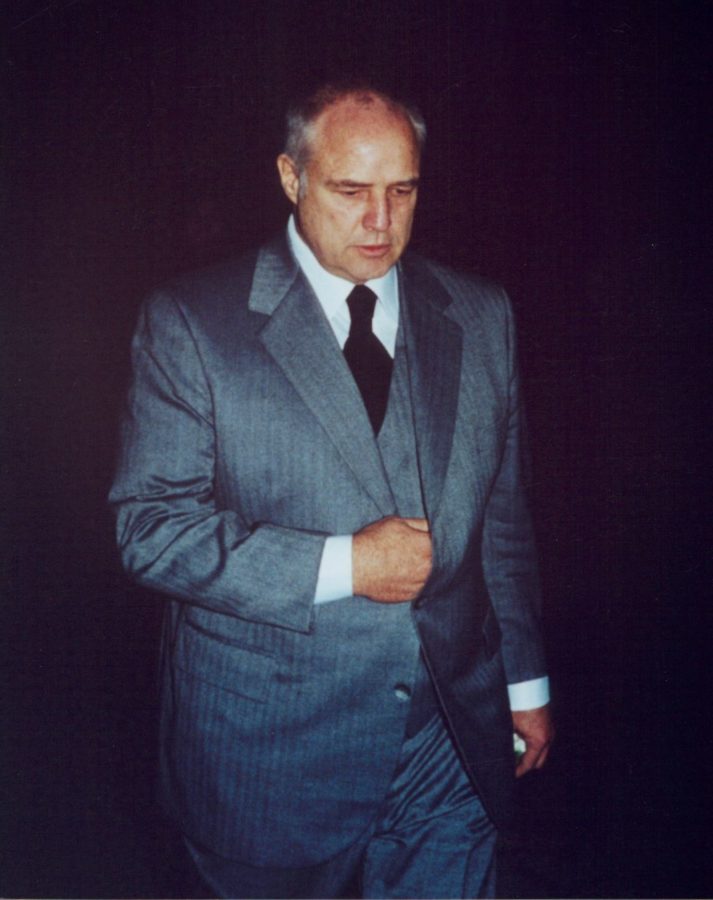 Marlon Brando in 1980, moments before a breeze lifted the actor’s jacket and revealed a gun in 1980. There were death threats against the Brando at the time.

In 1977, Steve McQueen was living at the Beverly Wilshire Hotel before he moved to Mexico for experimental lung cancer treatments. Colella took his 10-year-old son Richard to the hotel because “I knew he wouldn’t turn down a kid.” When Colella saw the actor, he asked, “Mr. McQueen, will you take a picture with my son?” The actor complied. “I didn’t sell it because he told me if I tried to sell it, he would track me down and get me.”

Colella enjoyed a friendlier relationship with Natalie Wood, star of “Westside Story,” Splendor in the Grass,” and “Rebel without a Cause.” He once found one of Wood’s diamond earrings in the grass and returned it to her. The actress wanted to give him a reward, but he refused. Colella fondly recalled when he took the last photograph of Wood at the Beverly Hills Hotel: “It was the day before she left on her death trip. She had sunglasses, a big Russian cross. She was so sweet and beautiful.” Wood died on a boating trip inCatalina Island in 1981. “I felt like there was some foul play there,” he said.

Using his 73 years to his advantage, Colella once asked actor Michael Keaton, “Hey, I’m kind of old. I can’t run fast. Could you please slow down so I can get a couple shots?” The actor did.

Gillogly said actors usually agree to be photographed with Colella. “They’re actually kind of tickled. They want to take the shot with him because he’s a celebrity and even they know that.”

Colella is slowly digitizing his rolls and rolls of film. “I shoot like my mind is on film. I don’t just push the button when they’re walking,” Colella explained. “I always wait for the right moment to take the picture. Usually, all my shots look pretty good. I have never used Photoshop, ever, on my photos.”

The number of paparazzi jostling for shots and the millions of everyday people with smartphones have changed the industry. In the 1980s, Colella earned $1,500 to $1,800 for a magazine cover photo. Today, his cover rate is $200 to $300.

“Once you put a photo online, it seems everyone can get a hold of it.” Colella appreciates his day job as a barber. “With the picture business, you can have dry spells. I would get tired of doing this if I had to do it all the time,” Colella said.

“When my first wife Erma started taking pictures and competing against me we got divorced,” Colella said. She later married his agent.

“I’m an old fashioned kind of person,” said Colella, the father of three adult children, eight grandchildren and one great-grandchild. “I just use a flip-phone because I don’t make that many phone calls. Nope, I don’t even text. I just use my phone to let my wife know when I’ll be home because she worries about me when I’m out late.”

“I’ve done it all. I’ve danced with Cher. I got Frank Sinatra and John Wayne together at the Beverly Hilton. I got Tom Jones and Priscilla Presley at Craig’s. I got everybody.