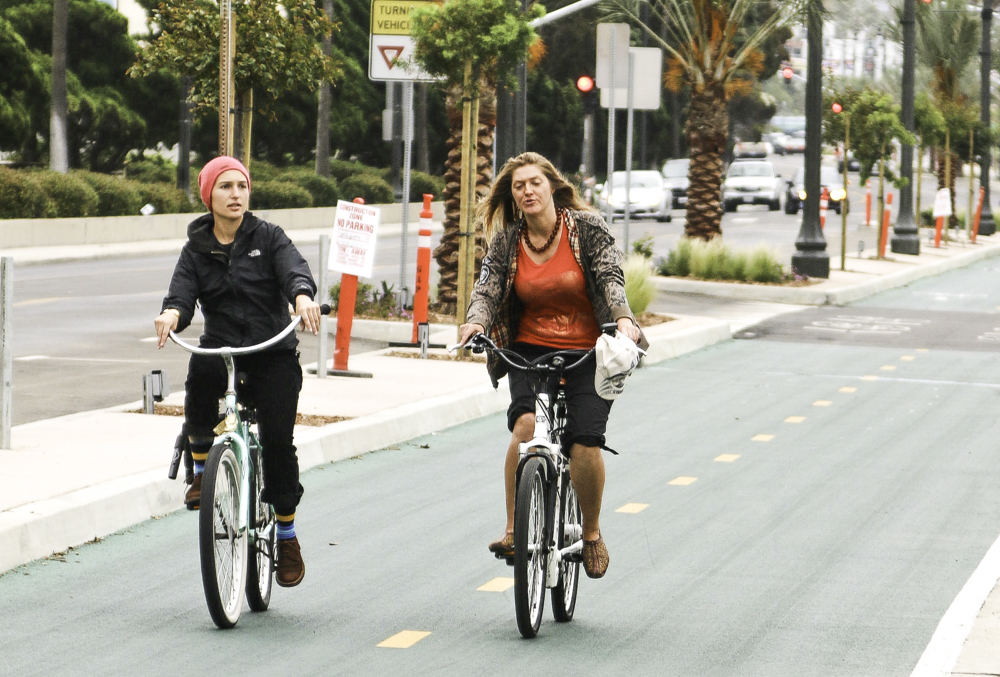 Redondo Beach’s bike path through the harbor area was controversial when it opened in 2014, but has since won cycling awards and grown in popularity. Photo

Redondo Beach’s bike path through the harbor area was controversial when it opened in 2014, but has since won cycling awards and grown in popularity. Photo

When a SUV driver turned into me while I was bicycling along a straight road, I didn’t report it. All I could think about in the shock of the moment was getting home before dark lest another driver hit me. As a transportation cyclist and mother, I live in fear for myself and my family. Will the driver of the car passing me at 40-plus mph look away from the road at a screen and run me over? Will my child, who walks across multiple arterials to catch a bus to school, be okay? Will my bicycle commuter husband make it home safely today?

It’s never too late to change course. Let’s reorder our priorities and build safe streets throughout our community.

Build out our connected bicycle network, as approved in the 2011 South Bay Bicycle Master Plan. Make all arterial sections protected bike lanes so we can end the blood sacrifice of our citizenry on the high injury network. Improve road crossings for people outside of cars.

Doing these things will benefit our entire community, including those without access to cars or chauffeurs who (pre-COVID) sat home alone. We can make our streets safe enough for my mother and my daughter to live independent, socially integrated lives without turning me into a full-time chauffeur.

Protected bike lanes serve many uses. They can also be used by people on motorized wheelchairs, scooters and tricycles (families with small children, elderly, disabled). Active mobility would make our community healthier (a Blue Zones goal), spare the air and lower our greenhouse gas emissions.

If we made our streets safer for travel modes other than automobiles, families wouldn’t feel forced to spend thousands a year paying for cars and insurance for their teenage children. With fewer cars, there would be less frustration over finding car parking, less financial stress for families, and less fear for seniors when they are forced to give up driving.

Building protected bike lanes along arterials will create greater separation between fast-moving cars and the sidewalk and storefronts. It would also create quieter and more welcoming streets that encourage people to travel and explore our streets outside of cars and at a lower speed. At slower speeds, people notice more storefronts. In other cities, sales tax receipts have jumped upwards along streets where bike lanes were installed.

Giving our city residents enticing and safe reasons to stay out of our cars opens wallets, keeps our money local, and helps our city’s merchants. Redondo Beach residents, merchants, and the planet will be happier, healthier and wealthier. ER