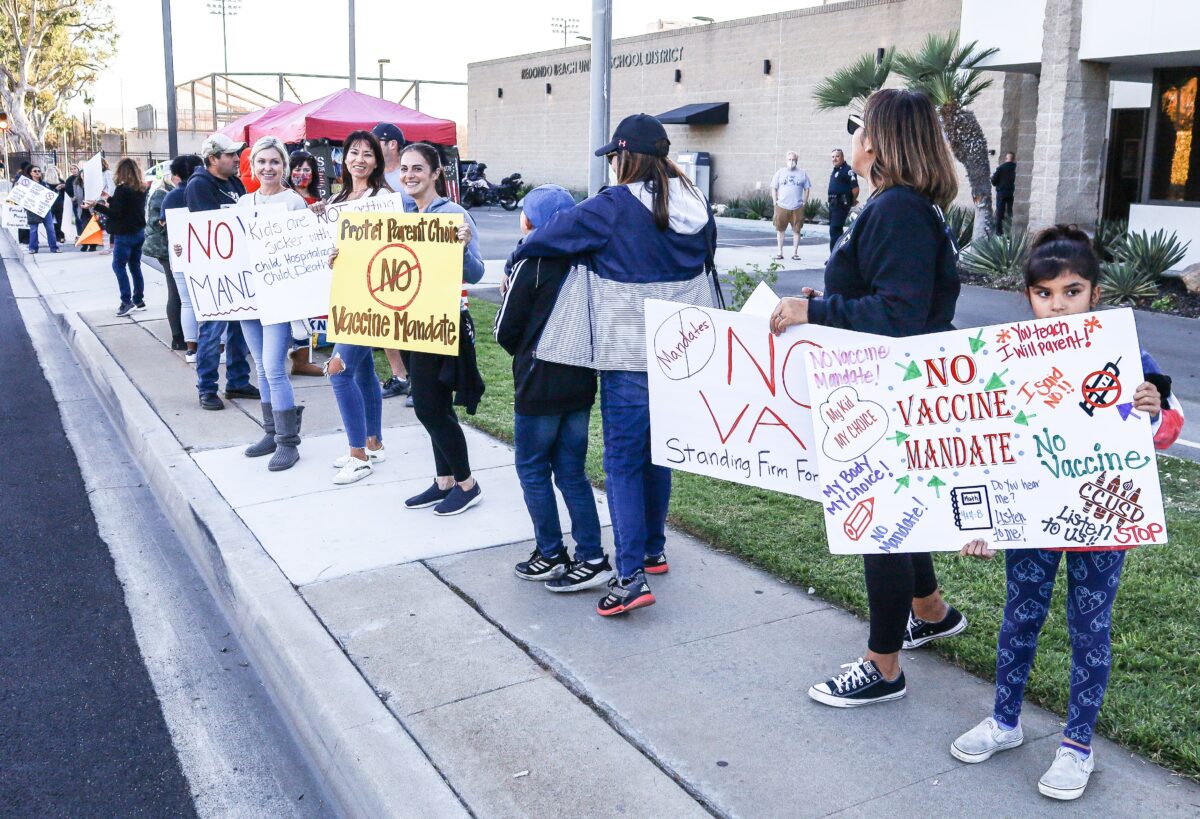 Redondo Beach parents protest against mandatory vaccinations during an October school board meeting, though mandatory vaccines are not required of students. Photo by Kevin Cody

A petition asking the Redondo Beach school board to adopt a “Pro-Choice Resolution,” in opposition to any school COVID-19 vaccination mandate, was submitted to the board before its Tuesday, Dec. 14 meeting by the group RBUSD Parents for Transparency.

Leader Farah Kreutz said that over 500 parents signed the petition.

“I didn’t receive 500 signatures, so I can’t comment on that,” Board president Raymur Flinn said.

Flinn responded to the petition by saying, “This board has not considered its own vaccine mandate for either staff or students.”

“Being asked to take a stand against something that no one’s proposed, it feels like we’re starting a fight that isn’t there,” Boardmember Dan Elder said.

“I agree there’s nothing concrete on the table to support or oppose,” said David Witkins, the longest-serving board member.

Flinn noted that she, and RUSD Superintendent Dr. Steven Keller, have expressed concerns to state health officials about anything that might keep students from school.

“We’re not in the business of excluding kids from education,” she said.

Governor Gavin Newsom said in October that he believes COVID-19 shots should be added to the 10 other vaccinations required of children entering kindergarten.

“A state mandate can be challenged,” Witkin said. “I’m not saying I would support, or not support a challenge, (but) there’s nothing to challenge yet… I’m not going to accept any mandate blindly.”

“I’m on the same page,” Boardmember Rachel Silverman Nemeth said. “The governor has just said he may issue this mandate. If he does, I would suspect there would be a lot of personal exemptions.”

Rolf Strutzenberg, who was elected to the board in March, along with Elder and Silverman Nemeth, said, “It’s a legitimate technicality to say a mandate doesn’t exist yet. But is it coming? I certainly think it is.”

He characterized what the board was asked to do by the Parents for Transparency as a preemptive strike.

“I see the writing on the wall that this mandate in its current existence will happen, with exceptions… Right now, I wouldn’t see doing a resolution, because I’m mainly concerned about that slippery slope.

I have my own concerns for my kids,” he said. “I know a lot of people absolutely don’t like that, for multiple reasons.”

“We’re gonna have to come to the best decision for the most people.”

Kreutz said of the school board’s response to her petition, “It was a really good discussion. “We were really happy with it. It was a positive thing for us. The thing that wasn’t positive was there was no vote.”

Kreutz said the resolution was based on a similar resolution passed unanimously by the Lucerne Valley School District board in October.

“We took that, and tweaked it for our community, our students,” Kreutz said.

Kreutz, whose two elementary-age children have transferred from the district to private school, said her group is not anti-vaccine, but is against vaccines currently offered.

“There’s just not enough medical background on these vaccines for children,” she said.

Kreutz said Redondo Beach Parents for Transparency was originally formed by herself and six other parents in her living room to oppose the teaching of Critical Race Theory in schools. ER