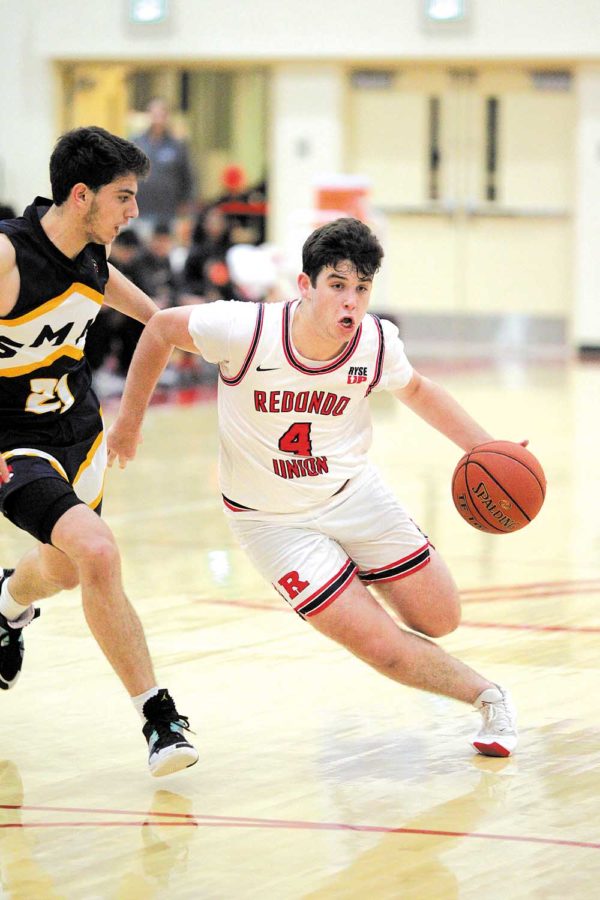 The Redondo boys basketball team started its quest for an eighth consecutive Bay League title with a much-closer-than-it-sounds 59-51 victory over Leuzinger Tuesday night.

More impressively, they held Amound Anderson, who came in to the Sea Hawk Pavilion averaging 28 points a game, to just one point in the Bay League opener for both teams.

Of course, that amazing defensive feat had a qualifier attached to it – Anderson had to leave the game mid-way through the first quarter after a brutal collision with two Sea Hawk players. The 6-foot-3 scoring machine got patched up and came back to play in the second quarter, but he was not the same dominant player.

Leuzinger Head Coach Arturo Jones said that after consulting with the team’s trainer during half-time, he made the difficult but necessary decision to keep his best player out for the rest of the game.

“It’s possible he suffered a concussion, and we had to follow the protocol,” Jones said. “They got off easy tonight with him scoring just one point. He’s our leader, our go-to guy, and it’s hard to replace someone like that.”

Redondo Head Coach Nick Welch, while acknowledging that Anderson missed more than half the game, still credited his team with a stellar defensive effort.

“Coming into the game, our whole game plan was built around stopping him,” Welch said. “He’s a great player, and everything we did defensively was designed to limit his scoring. Holding him to one point in the first half was pretty good.”

Even with Anderson forced to watch from the end of the bench, the game was tight until the final seconds.

Redondo clung to a 28-26 lead at halftime thanks to a barrage of 3-pointers from shooting guard Jack Dickinson.

With Anderson sitting out the second half the Sea Hawks relaxed on defense and let Leuzinger race out to a 42-37 lead late in the third quarter. The Olympians were led by 6-foot-1 sophomore Akoye Hudson, who, according to his coach, was playing his very first game of high school varsity basketball. Hudson did not play last year nor during the first part of this season. 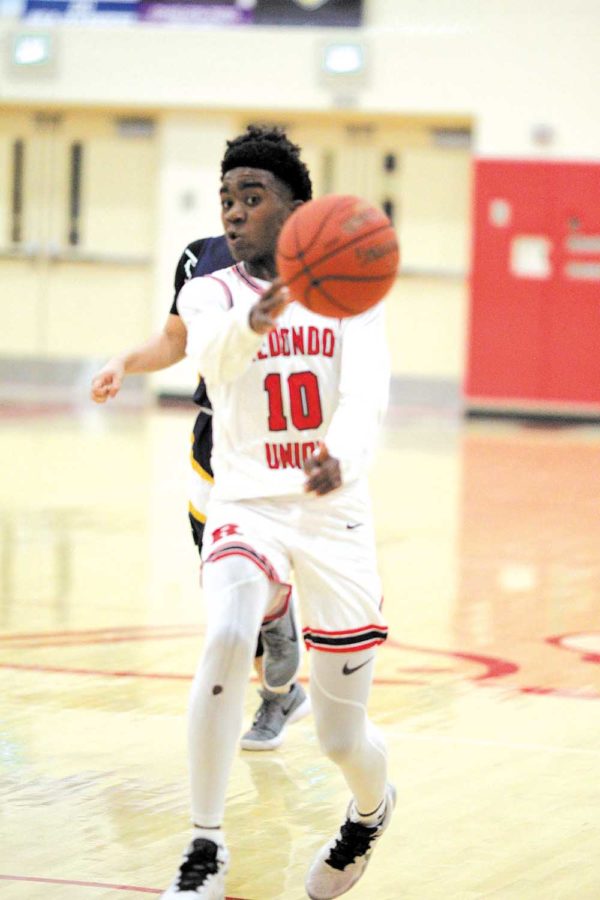 Kendall Parker’s pass to Godoy at the end of fourth quarter was key to Redondo’s win.

But just when it looked like Hudson was going to play out a storyline that even Hollywood would reject as too improbable – unknown player goes from scrub to star in the course of one game – Redondo woke up and showed their Bay League dominance is not over yet.

First, senior guard Kendal Parker drilled a deep 3-pointer to cut the lead to 42-40. Then another senior guard, Dom Walker, grabbed a missed shot and put it back in to draw the Sea Hawks even at 42-42 entering the fourth quarter.

But Leuzinger refused to give in. They held on to a 47-46 lead late in the fourth quarter.

While Redondo doesn’t have an obvious best player, as it has in so many years past, it does have a very deep team and that depth came to the rescue as role players stepped forward to secure the hotly contested win. 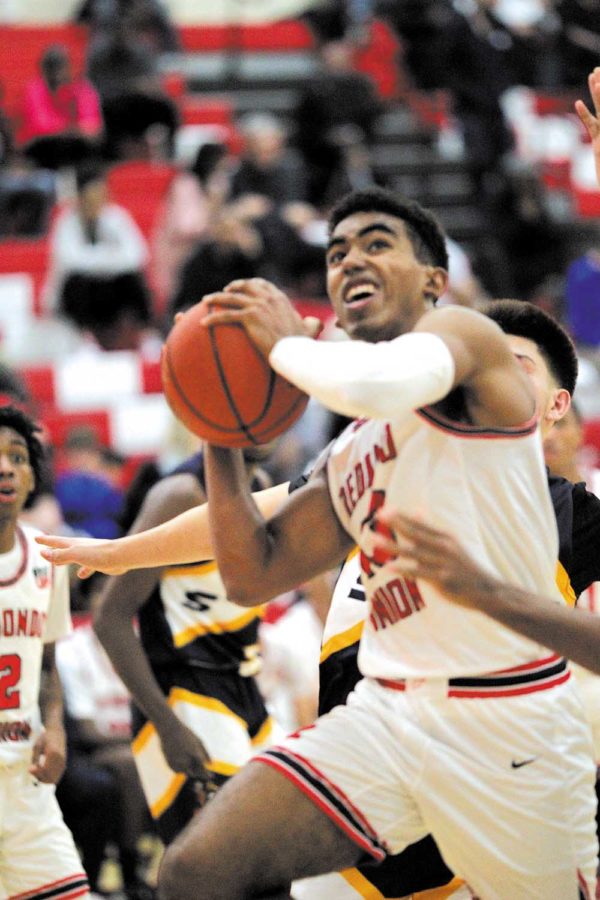 Parker scored with a stick-back to take back the lead at 48-47, and junior guard Chidera Oti came off the bench to swish two free throws for a 50-47 lead. Parker then hit the biggest shot of the game when he drilled a deep trifecta for a 53-49 lead.

“Kendal provides us with senior leadership, and he’s always ready to take the big shot if it comes to him,” Welch said. “That’s exactly what he was in there for.”

Leuzinger crawled back to within 53-51 on a spinning drive by Hudson, but Parker made yet another big play when he drove to the bucket and at the last second dished off to 6-foot-4 senior Caike Godoy, who hit a hard-driving layup for a 55-51 lead that effectively ended the game with just a few seconds left.

Hudson led the Olympians with 11 points, while Godoy led the Hawks with 18 points. Dickinson chipped in with 12 on four 3-pointers and Parker contributed 10 points.

After the game, first-year coach Welch said his team is determined to extend the Redondo culture of winning Bay League titles.

“There isn’t a player in that locker room who is not well aware that we have won the last seven Bay League championships,” Welch said. “We’re just going to take it game to game, one game at a time, and try to get better every game.”

Across town, as if to demonstrate just how wide open the Bay League race really is this year, Mira Costa pulled off a major upset by beating pre-season favorite Peninsula 66-54 at Manhattan Beach Middle School. The Mustangs were led by their best shooter, senior guard Tyler Antrobius, who drilled six 3-pointers on his way to a career-high 30 points.

Redondo will host Mira Costa on Tuesday, January 21, in what is shaping up to be a pivotal game in the wide-open Bay League race.