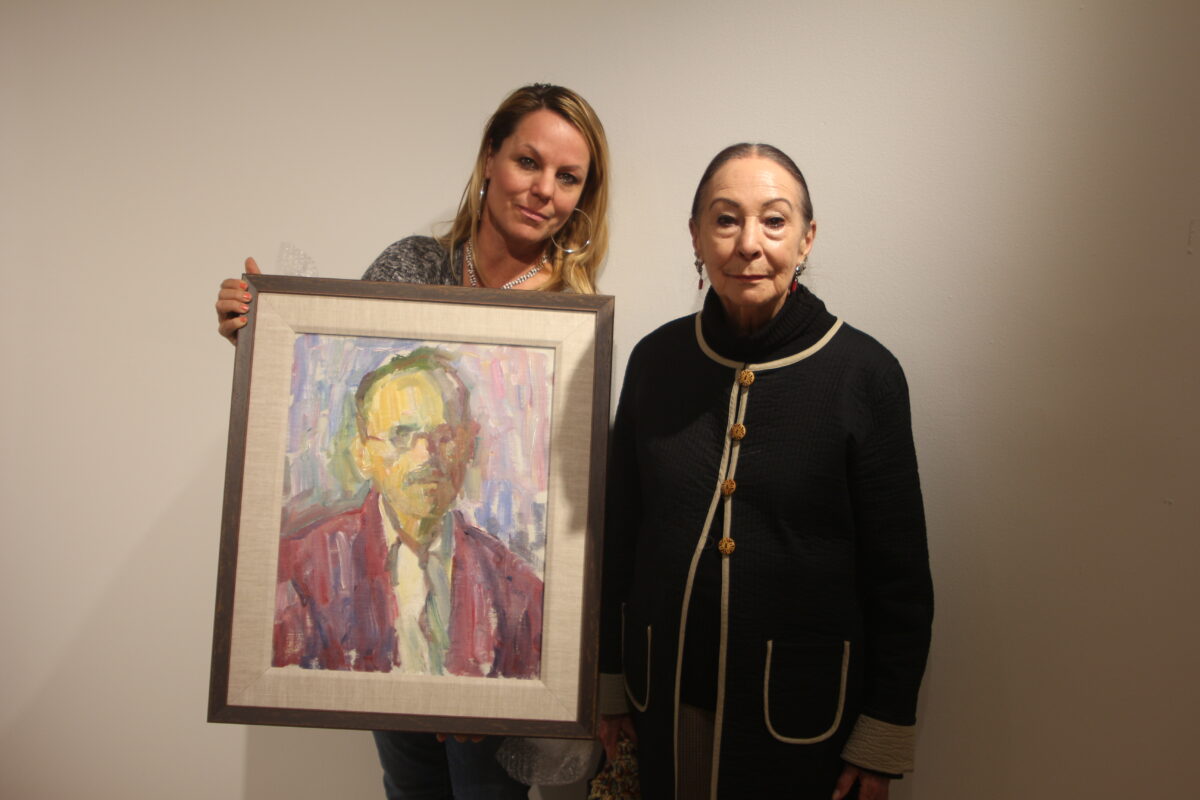 Sometimes one’s life and subsequent reputation hinges upon one key decision, and for the Belgian Post Impressionist painter Paul Jean Martel (1879-1944) that decision took place in the early 1920s when he and his wife, Muriel, decided to return to the United States from Belgium.

“He shouldn’t have left,” his son, Remi, told me 15 years ago. But Muriel, who was originally from Philadelphia, and where in fact Paul Martel had met her, was restless and perhaps homesick after more than ten years abroad. After all, the family – Remi was born in 1915 – had endured the economic strains imposed by World War I and its aftermath.

“He should have stayed in Europe instead of coming to Philadelphia,” says Remi’s widow, Carmen (Remi passed away in 2007), “but I guess Muriel was tired of soldiers always coming to [the house]. They would knock on the door and take all their copper to make bullets. And she was afraid for Remi, I guess, so they came to this country.” 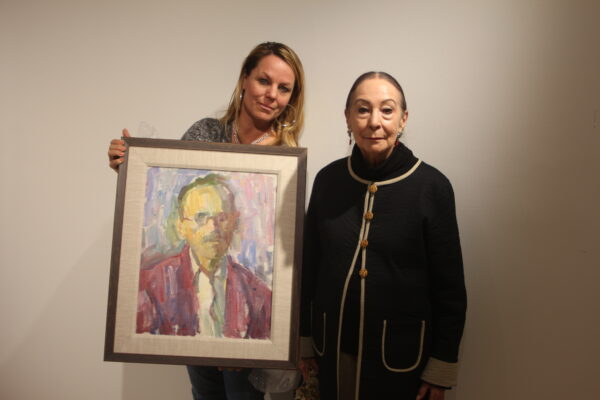 (I’d met Remi at least by early 2000 in the Malaga Cove home he shared with his family, and when I quote him it’s from that time. My recent conversation with his wife and daughter took place in the central gallery of the Palos Verdes Art Center, a few days ago and in advance of tomorrow’s opening of “Paul Jean Martel: Post Impressionist.”)

Before the return to America, however, Martel seems to have shown a great deal of promise. “Right before the war,” Remi said, “he began to paint a lot and he had exhibitions in 1920, ‘21, and ‘22. He exhibited with Matisse and other Post Impressionists. He was doing well; he was getting good write-ups.”

In his early 40s and in his prime as a painter, Martel was hesitant to leave Belgium but his wife assured him that he’d do well in the States.

“Sure, if you go to New York,” Remi said, with a gentle laugh and a shake of his head. “In short, he went out of circulation. That’s the point of the whole thing. To go to Philadelphia took him out of the circle.” 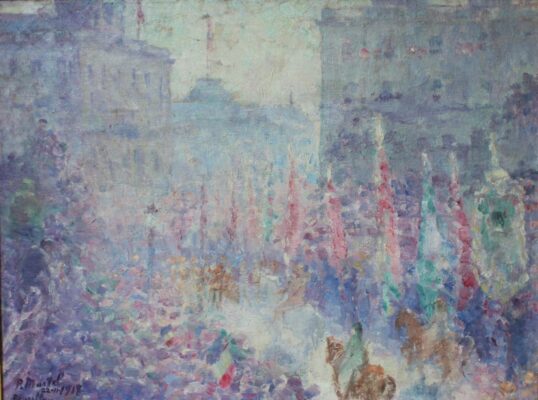 Remi Martel was the dutiful son, Muriel and Paul’s only child, who periodically tried to interest galleries in his father’s work. Paul Martel died in 1944, Muriel about ten years later, at which time Remi shipped the work to New York where it remained in a vault for two decades. In the meantime, Remi pursued his own career – as a dancer and choreographer – and it was in the Big Apple that he met Carmen Gutierrez, who became his wife.

Not only that. Carmen, born in Mexico City, was apparently the first Mexican woman to appear on Broadway, and she had a key role in “West Side Story” (she’s on the original Broadway Cast Recording of 1957) and other hit musicals of the era. 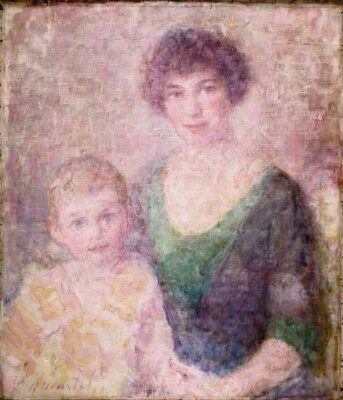 Maclovia Martel is Carmen and Remi’s daughter, and like her father she’s a tireless promoter of Paul Martel’s work.

“I think he’s an amazing artist. I’ve seen his work my whole life. Everyone loves a different artist – like maybe a Monet or a Gauguin or a Picasso – but I love Paul.”

Maclovia herself inherited the artistic gene. She attended Otis Art Institute, made wood sculptures, wrote and recorded her own music, and has a talent for filmmaking and editing. She even shot a documentary about her mother, and then sent it to Lincoln Center where it was accepted for a film festival.

As for Paul Martel’s stature as an artist, critics might label him an “also ran,” someone who almost placed, but not quite. Could that change?

He resembles in some way the earlier Impressionists Alfred Sisley and Camille Pissarro, whose palettes were often lighter than those of the untouchables – Manet, Renoir, Cezanne or Degas. Martel’s colors seem shy by contrast, as if veiled or evanescent.

Perhaps explaining why he painted as he did, Paul Martel once said: “In Belgium, as we grew up, we learned to see things through the dampness of an atmosphere heavily laden with humidity and sun. We Flemish people have always painted the color values in our air; in that respect I believe I follow the Flemish tradition.”

Paul Martel had a style, as Carmen notes, and he clung to that style Maclovia says: “He didn’t paint for other people. I think that’s the biggest point. He just painted for himself, and he wanted to share his art with people.”

The move to Philadelphia in 1923 didn’t kill Martel’s career; he not only exhibited in galleries with the Philadelphia Sketch Club and at the Pennsylvania Academy of Fine Arts, but earned money as a portrait painter. Still, was there a momentum, never to be regained, that he lost for good when he and his family left Belgium? 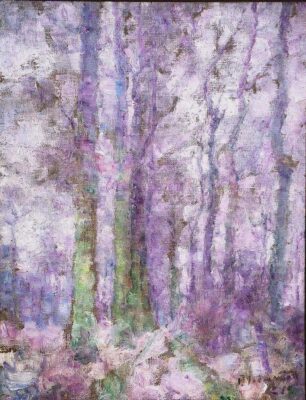 Gone, but not forgotten

About a year ago, a friend of Maclovia’s contacted Joe Baker, the Palos Verdes Art Center’s director and chief curator. Baker came out to Torrance where most of Martel’s work is now kept, and apparently he was delighted by what he saw.

However, although Martel’s output includes pastels and watercolors, Baker decided to go with just the oils. As there are gorgeous pastels that provide a further window onto Martel’s aesthetics, a few of these, framed, might have enlivened the little forlorn gallery off to the right as one enters the building. The collage-like wall of unframed paintings and oil sketches of various sizes is seductively arranged, but the unframed larger works do seem a little naked.

The important thing, of course, is that the pictures are being shown, and perhaps Baker has sensed or anticipated that this exhibition will be well-received, and that Martel will regain at least some portion of the recognition that has eluded him in the 70 years since his death.

“I set up a website for his work,” Maclovia says, “and I got messages from collectors all over the world. We had no idea that he had a fan club. We have about four Belgians coming to the show, and one gentleman has 30 Paul Martels and his friend has 20 Paul Martel paintings.” She adds that she’s heard from admirers and collectors of her grandfather’s work from the East Coast and from Italy. “Until I put up the website I had no idea.”

In the planning stages for early next year is a show of Paul Martel’s work in his native country. The Queen of Belgium, Maclovia says, acquired one of Martel’s paintings, and that’s not the kind of honor one can scoff at. Most of the work in that show will come from European collections, although Maclovia indicates that her family may contribute pictures from California.

The exhibition here also includes display cases with letters and other documents. Any painter should be proud to be given this kind of care and attention, and how nice it would have been if Paul and Muriel, and of course Remi, were here to see it along with the rest of us.