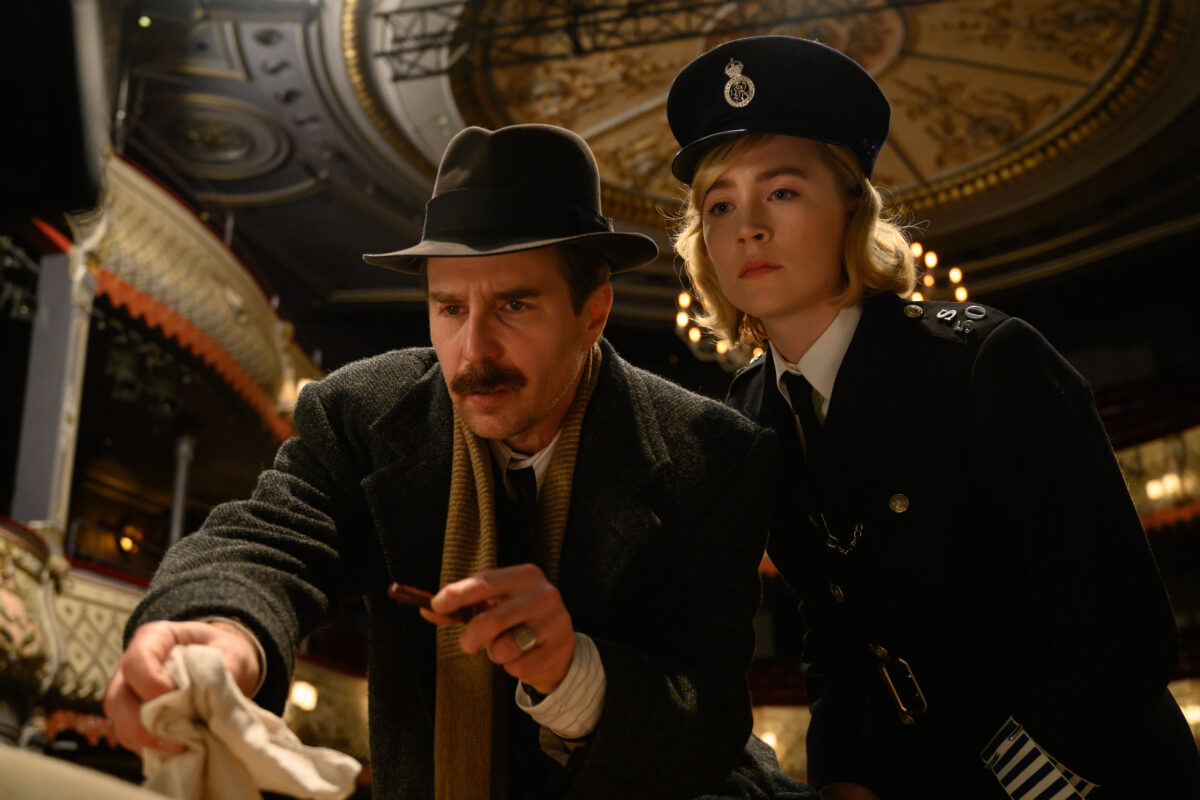 Sam Rockwell as Inspector Stoppard and Saoirse Ronan as Constable Stalker in "See How They Run." Photo by Parisa Taghizadeh, courtesy of Searchlight Pictures. © 2022 20th Century Studios All Rights Reserved

Writer Mark Chappell came up with a killer idea when he decided to reverentially spoof Agatha Christie’s unbelievably long-running West End play The Mousetrap. Directed smoothly by Tom George, the action rarely lags and the dialogue crackles with humor. Both satirically referencing Christie’s work while mirroring it.

Cue the voice-over of Leo Kopernick, the blacklisted American director who has been hired to direct a filmed version of the play. His voice drips with disdain for The Mousetrap even though he has yet to see it. As he tells the audience, “It’s a who-done-it. You’ve seen one, you’ve seen them all. You know the drill. An interminable prologue in which all the key players are introduced. You get a sense of the world they inhabit and then the most unlikeable character gets bumped off.”  Oh, and usually the butler does it. 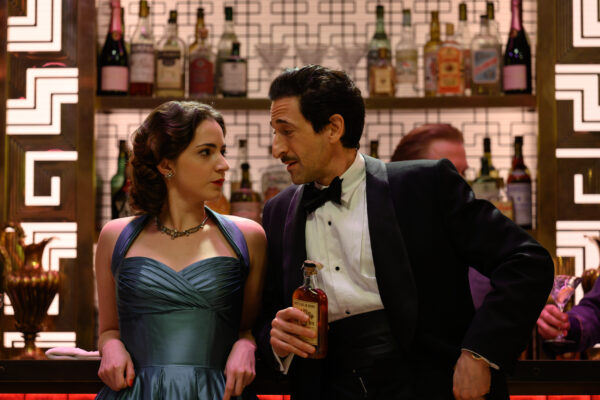 Pearl Chanda as Sheila Sim and Adrien Brody as Leo Kopernick in “See How They Run.” Photo by Parisa Taghizadeh, courtesy of Searchlight Pictures. © 2022 20th Century Studios All Rights Reserved

At the party celebrating the 100th performance of The Mousetrap in 1953, the cast mingles with the producers and Leo, the VIP guest from Hollywood. The very definition of a boor, Leo hits on all the attractive women, insults Mervyn Cocker-Norris, the screenwriter hired for the adaptation, and ridicules his producer, John Woolf. Like a bull in a china shop, Kopernick also picks a fight with the lead, Richard Attenborough (yes, the Richard Attenborough who was an established movie star at the time and would go on to even greater fame in “Jurassic Park” was actually the first lead in The Mousetrap), and ruins the party.

True to the prologue, the most disagreeable character (Leo) gets murdered; bludgeoned to death backstage. Inspector Stoppard draws the short end of the stick and is assigned the inexperienced Constable Stalker, the token female in the department, as his assistant. Everyone else at Scotland Yard is working on a serial killer case. Only alluded to, but there was an actual ongoing investigation about murdered women found buried in Notting Hill. The film about the eventual capture of the serial killer, John Christie, was called “10 Rillington Place,” and starred Richard Attenborough! 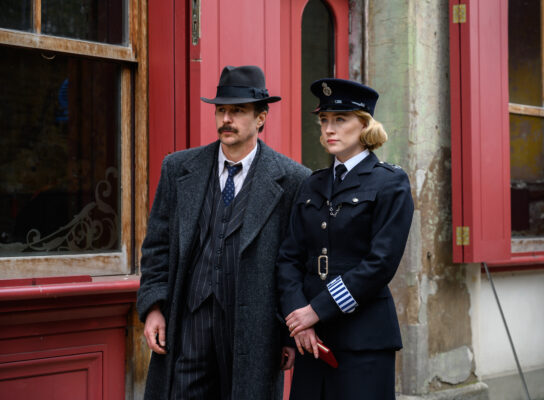 Sam Rockwell as Inspector Stoppard and Saoirse Ronan as Constable Stalker in “See How They Run.” Photo by Parisa Taghizadeh, courtesy of Searchlight Pictures. © 2022 20th Century Studios All Rights Reserved

But I digress, as the film sometimes does very charmingly, and Inspector Stoppard, more likely to stop at the pub than finish his interviews, is dogged by Stalker and her notebook. She writes everything down, ridiculed by her boss, for being nothing, if not thorough; something that will come back to haunt him.

Each person who attended the celebration is duly interviewed and each has a secret that may or may not be relevant. Stalker, constantly referring to her notes, continually sees guilty parties because she sees motives everywhere. Stoppard’s’ advice? “Don’t jump to conclusions.” She writes that in her notebook. 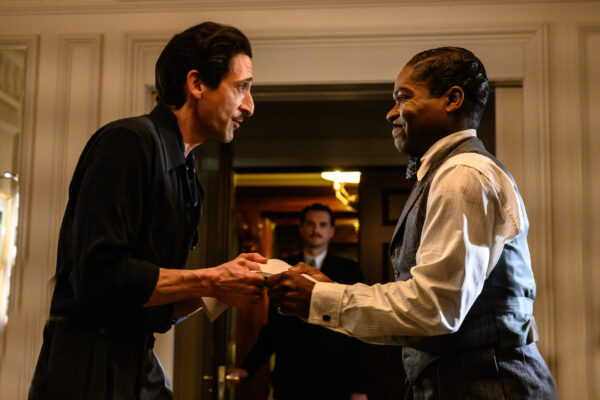 Adrien Brody as Leo and David Oyelowo as Mervyn in “See How They Run.” Photo by Parisa Taghizadeh, courtesy of Searchlight Pictures. © 2022 20th Century Studios All Rights Reserved

Leo’s movements prior to his death are recounted by all who had unpleasant encounters, which is virtually everyone. Rejecting Mervyn’s script in a meeting with the producer, he explains his vision for the film, story boarded to make it more concrete. His new version of The Mousetrap bears little resemblance to the play, other than the hateful guy gets killed, the suspectes (that would be everyone) are gathered in the drawing room, and the killer takes aim at the hero, the intrepid detective. As shots are fired, the detective’s partner appears out of nowhere to save the day. Or something like that. Both the producer and writer are horrified. This bears nothing in common with Christie’s play.

Filled with eccentric characters that are pure Christie, make sure to track the plot of The Mousetrap against Leo’s storyboards. All of those illogical threads will eventually come together.

What makes most of this work, and those parts that don’t are still fun, is a cast that plays it seriously. There is no wink-wink, just actors playing it straight. The always astonishing Ruth Wilson (Petula Spencer), primarily known for her dramatic work (“Luther,” “Oslo,” and “The Affair”), curls those signature lips as the snarling and savvy producer of “The Mousetrap” to comedic effect. Adrien Brody is, perhaps, a bit over-the-top as the villainous Leo Kopernick who meets his end to no one’s sorrow. He can, however, be forgiven because he’s someone like Christie would have written him. The fun he had doing this is written all over his face.

David Oyelowo as Mervyn, better known for serious fare like “Selma” and “Five Days,” tried a bit too hard because he lacked the necessary comedic timing. Sam Rockwell, Inspector Stoppard, curiously underplayed his role. Perhaps it was the English accent that didn’t seem to fit perfectly or he felt that this was the way to portray the boredom and annoyance he felt by being marginalized to this case, in either case he needed to give more to more effectively play off Saoirse Ronan. 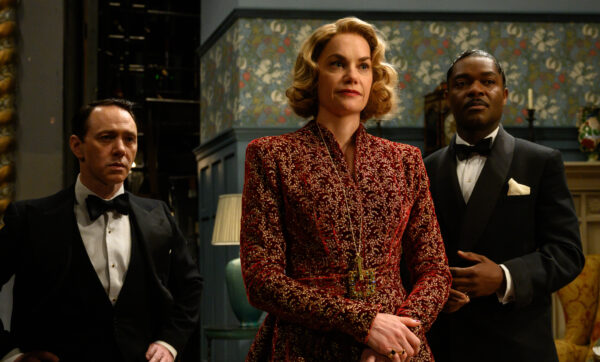 Reece Shearsmith as Woolf, Ruth WIlson as Petula Spencer, and David Oyelowo as Mervyn in “See How They Run.” Photo by Parisa Taghizadeh, courtesy of Searchlight Pictures. © 2022 20th Century Studios All Rights Reserved

The true star of this amusing comic mystery was the spectacular deadpan performance of Saoirse Ronan as Constable Stalker. Her comic timing is impeccable, her charm is overwhelming, and what seems like an obtuse naivety is actually a penetrating intelligence. A beginner she may be, but a dullard, not a chance. I couldn’t stop smiling whenever she appeared on screen. That she had or was on the receiving end of many of the best lines was no mistake. Take for instance her charm offensive at the Savoy where Pierre, the hotel manager, is about to let her and Inspector Stoppard into Leo’s room. Flirtatiously she asks him, “What part of France are you from?” He replies, “Belgium.” Her reaction, both contained and embarrassed, is hilarious. She is the queen of the throwaway line as well as the reaction. Heavy on award nominated dramatic performances, it’s amazing it took this long for someone to try her in a comedy. She literally runs away with this film.

Clearly Chappell had fun naming his characters, from “Stalker” to “Stoppard” to Harley the Motorcycle Messenger, among others. But both Chappell and George brought with them, and to us, a love for theater and movies. The production and costume design are pitch perfect, drawing you in even further to the story and characters.

Opening wide in theaters on September 16, including the AMC South Bay Galleria 16, The AMC Marina 6, the AMC Rolling HIlls 20, and the AMC Del Amo 18.