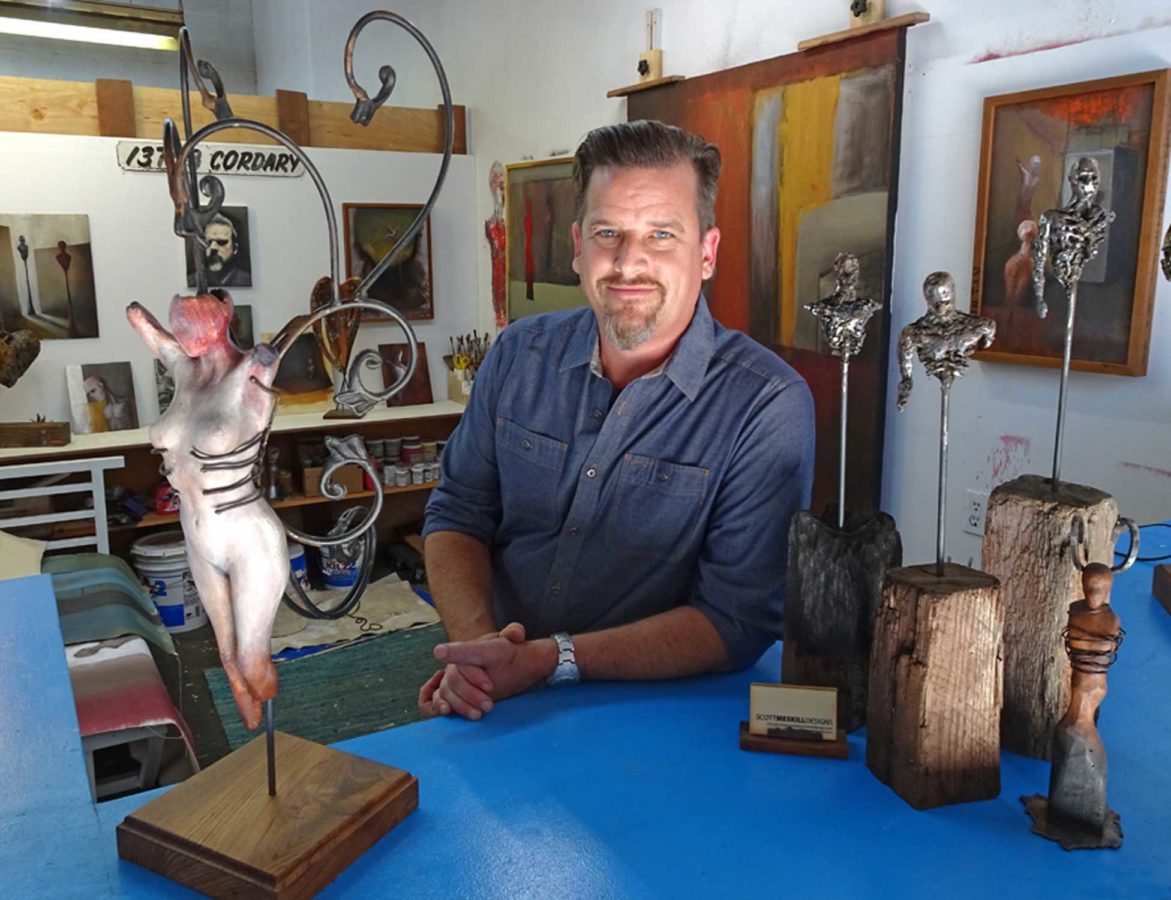 Scott Meskill in his studio. Photo courtesy of the artist

Scott Meskill in his studio. Photo courtesy of the artist

What Shall We Do with All This Happiness?
Artist Scott Meskill is among “The Usual Suspects” at ShockBoxx in Hermosa Beach

If we look north to El Segundo, south to Palos Verdes, and east to Torrance, it’s safe to say that ShockBoxx Gallery in Hermosa Beach is emerging as the most interesting, if not most important, art venue in the South Bay. Curated by Michael Collins and Laura Schuler, ShockBoxx has gained attention by having a constant turnover of shows, some of them up for a week or two weeks or maybe just a weekend. This is quite unlike the larger art spaces in Palos Verdes, Torrance, or Manhattan Beach where the art is on view for two or three months but just days after the opening the place is moribund.
Which happily brings us to “The Usual Suspects,” opening Saturday at ShockBoxx. Between 15 and 20 artists are featured and, as the title indicates, many of them have displayed work in the gallery before.
“The show is a celebration of (our) having been around for a little over a year,” says Michael Collins. “This is a way of acknowledging the folks who have supported the concept and helped drive the movement.”
The artists, Collins goes on to say, were told to “Bring whatever you want.” One of them who was asked to participate is Redondo Beach resident Scott Meskill. He’s exhibiting a five-foot painting called “Undisclosed Location,” which we’ll look at more closely in a few moments.
First, however, there’s the story of how he arrived at where he is today.

Barbie and beyond
Meskill was born in Detroit, Michigan, and 10 years later his father was transferred to Florida, which is where Meskill spent the next 20 years. When he was 28 or 29 he moved to California and he’s been here now for the same amount of time he lived in Florida.
“I definitely feel more connected to the West Coast than I ever did to the East Coast,” he says, but it’s also true that where we’ve spent our youth or formative years remains a big part of who we are.
About his years in Detroit, Meskill says, “It’s a crazy sports town. I grew up in a crazy sports family and I was always the black sheep. I was always in the kitchen with my mom and my grandmother eating the snacks while everyone’s watching sports. But I got dragged to all the Red Wings games, all the football, all the hockey, all the baseball. It was never my thing, and I pushed away from all that.
“I didn’t quite know where I fit in to it,” he adds, but it eventually led to “where I am in the art world. It’s like I found my tribe, you know?”
Meanwhile, there was this girl in El Segundo and Meskill was in a very intimate relationship with her for 15 years. However, it wasn’t the kind of intimate relationship you may be imagining since the young lady was, let us, say, extremely petite. 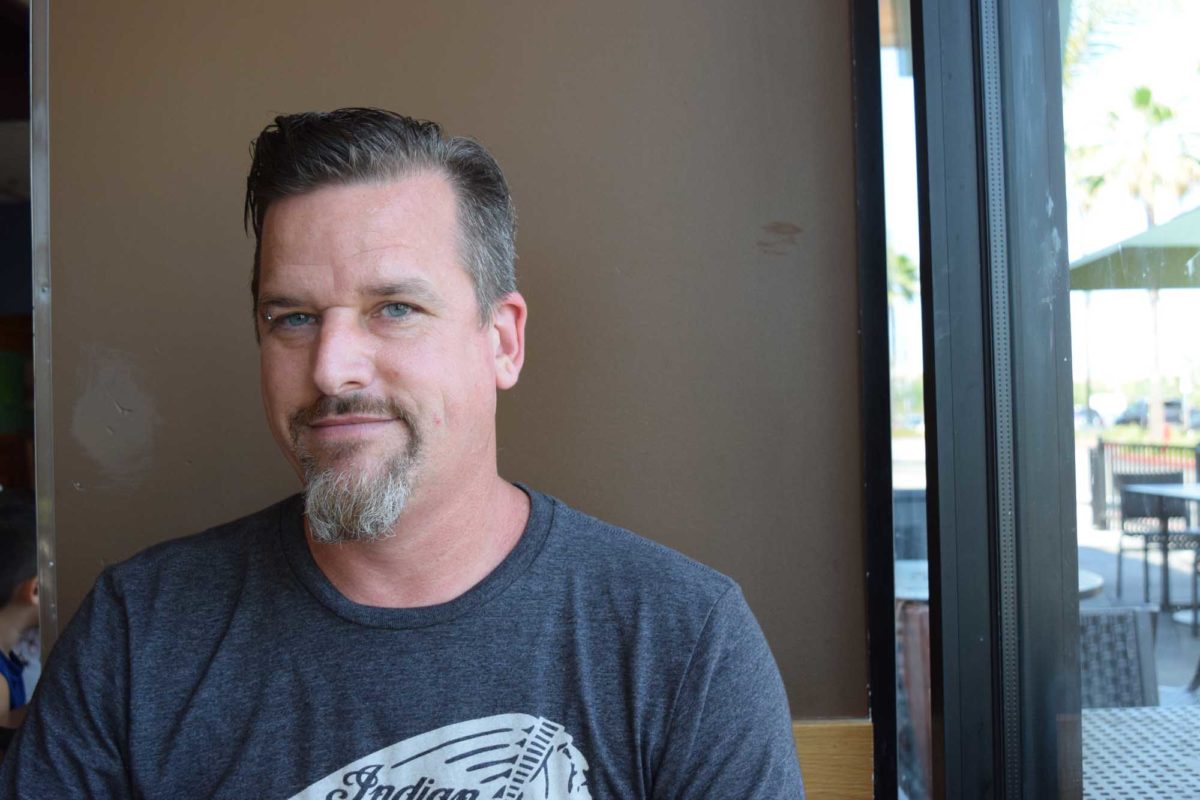 “I was a Photoshop artist at Mattel,” Meskill says, “and I was airbrushing Barbie to make her look good. I didn’t go to traditional art school, and I wasn’t the guy who was drawing all my life, either. But sitting in front of the computer painting doll hair, or skin, or color matching, and doing a lot of that stuff, I was developing skills that I didn’t know translated into physical painting.”
Apart from beautifying Barbie, Meskill wasn’t yet painting outside of his 9 to 5 job. But as a creative individual he found a way to make the transition from employee to self-employed artist.
“So,” Meskill begins, “my whole foray into this world is because I like making things. I started Scott Meskill Designs because I was building furniture and vases and lamps,” and each piece was unique, too, not mass-produced. Then he moved into a studio complex in Hawthorne where other artists were working and living, among them the well-respected Bob Wilhite and Paulin Paris. They convinced Meskill that what he was creating wasn’t merely furniture, it really was art. He began to participate in the open studios (evenings open to the public) that brought in artists and art-fanciers alike.
While still employed at Mattel, Meskill would work in his studio at night or on weekends and even during his lunch break. Being around dedicated artists, and especially with girlfriend and fellow artist Shannon Donnelly, was a great motivation to pursuing his own work full time.
Donnelly also seems to have been instrumental in getting Meskill to develop and evolve as a painter. He recounts an event the two of them attended where participants drank wine and painted, the instructor having selected an ocean wave as their subject.
“I’ve been a surfer all my life,” Meskill says, “and I just went ahead and started painting while everyone else was following the teacher.” Their finished work, he notes, tended to look the same. “Mine looked like the cover of a surfing magazine because I’ve been in a barrel, I know what that is. And I was really impressed (with) my colors and brushstrokes. I was like, ‘I can do this.’ That was the first time touching paint on canvas, and that was four or five years ago.”
What began as something playful became a more serious interest. “Now I have been influenced by a number of different painters and my paintings and sculptures are finding common ground. I’m also combining them physically where I’m painting picture frames or painting the background after I’ve sculpted a figure that fits within that frame.”
Also, for about a year, Meskill and Donnelly did a number of pictures where first one of them would paint something on a canvas and then the other would add forms or colors, before handing back the brush, so to speak, and they took several turns each until they decided the piece was finished. Collaboration takes many forms, but this one must surely be among the most stimulatingly creative.

The more the merrier
“Like I said, I feel like I’m in a tribe I didn’t know existed,” Meskill says, “and I just relate to it.”
Having left Mattel, his focus is now on his own work, whether he can sell it right away or not. “Some people will be like, Well, you’re not making any money,” to which he replies, “It’s important to get this work done.”
As one might imagine, what sells best are the furniture pieces, because here we don’t just have art for the walls but functional art, and Meskill mentions a large table on which he labored for two months.
It was a commissioned piece, presumably reimbursing its creator financially, but, Meskill says, “It took up so much of my time and energy that I wasn’t able to do anything else… and I like to be doing ten things at once.”
He lists what he’s working on: Three paintings on one side of his studio, two sculptures on the other side, a piece of furniture… “And then at home I’ve got three paintings going on. If I were to do only one thing it’s gonna drive me crazy because I’m not getting the other stuff done.”
Since he doesn’t need to sell everything he makes to pay the bills, Meskill can pretty much choose what sort of furniture to design and make, and what requests to turn down, such as doors and drawers. For the most part, he’s sticking to tables, and also lamps and vases. There seems to be a continual demand for the latter items, whereas other pieces, made on spec, “take up a lot of space if you’re not selling them.”
When people suggest that Meskill concentrate his efforts on one item he quickly tells them no. “I’m like, Nah, it hurts my soul. If I’m going to focus on one thing I’ll go back and sit at that job (at Mattel).” What’s more personally satisfying is “creating something out of my head and having someone want it so much that it’s up on their wall or whatever. That’s huge. I get way more reward out of that than making that big paycheck for the 9 to 5.” 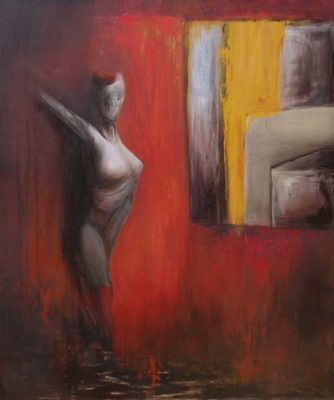 Subject matter disclosed
We were going to get back to his painting, “Undisclosed Location,” so let’s do that now.
The work falls within the range of Meskill’s current subject matter. “I’m only realizing some of that now as I step back,” he says. “I’m continually doing torsos, bodies without arms or legs in these weird juxtapositions. There are always walls and borders and sometimes a window. I’ve noticed these things are repetitive and, as much as I’ll try to get away from them and do something different, they all steer back to that.
“The windows usually represent some kind of hope; the walls are obstacles. The truncated figures are limitations as humans; we all have them and they’re all inside.” At the same time, “There’s always a theme of persistence and resilience despite the obstacles, despite the limitations.” Yes, he recognizes the repetitiveness, but explains it thus” “This is me, this is my struggle, and because it’s coming from an emotionally deep place it’s going to represent me.”
But he doesn’t overthink it beforehand. “I don’t go into it with a preconceived thought. I paint from the shades and colors and I see what develops.
“That leads to the piece that I have in the show,” Meskill continues. “Originally I was trying to recreate an abstract painting I’d done of Shannon. I had done a realistic nude portrait of her and then I did an abstract version. The abstract version came out so great and we loved it. I don’t want to sell it.”
Meskill, finding himself with a large blank canvas, then decided he was going to recreate the small abstract. “And what you realize,” he says, “is that you’re painting from emotion and you can never recreate the same thing. You’ll never be in the same emotion and time frame that you were when you did the little one. Once I figured it out, I allowed the big painting to become something different, and it needed to be something different.
“I’ve never shown something that big,” Meskill says of “Undisclosed Location,” “and so it’s a little nerve-wracking. But we’ll see.”
It’s bound to draw attention and to stimulate conversations, which all art aspires to.
The Usual Suspects is on view Saturday from 7 to 9 p.m. at ShockBoxx Gallery, 636 Cypress Ave., Hermosa Beach. Also from 7 to 9 p.m. on August 25. It’s a group show with many of the gallery’s favorite artists participating. (310) 989-4323 or go to shockboxxproject.com. ER