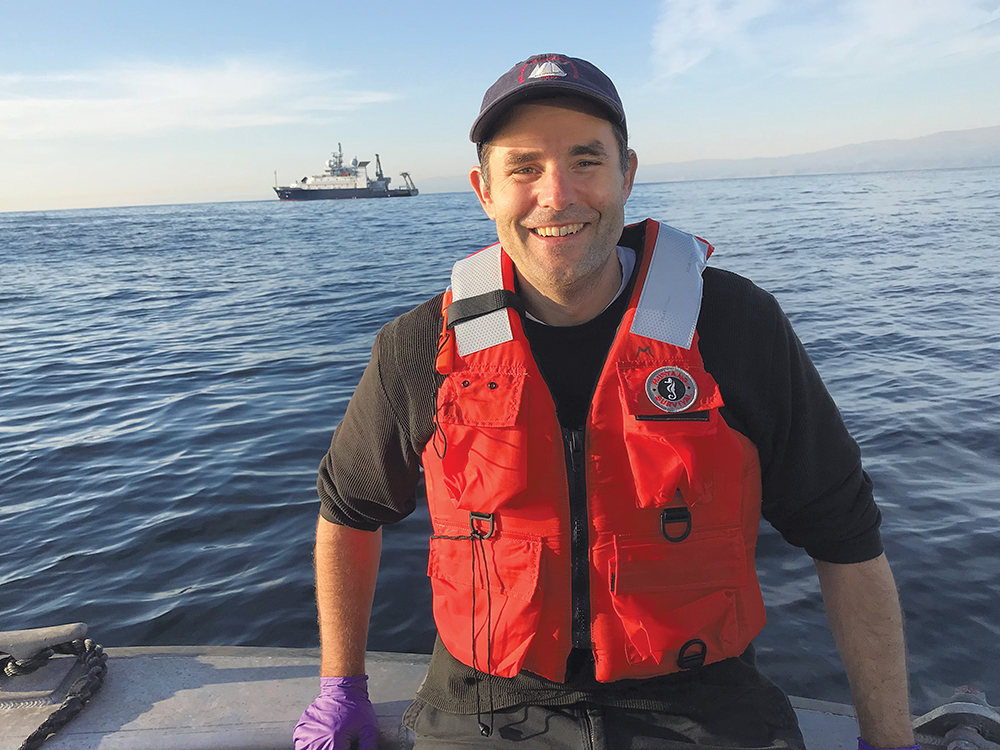 Dr. David Valentine poses with the Sally Ride research vessel during a trip in 2017 helping responders respond to the Thomas Fire, which impacted Ventura and Santa Barbara counties.

Reports in old ship logs of thousands of barrels of DDT being dumped into the Catalina Channel during the 1950s were confirmed in 2011 by photographs taken by UC Santa Barbara marine scientist Dr. David Valentine

The signs trace back to the period between 1947 and 1982 when Montrose Chemical Corporation of California, in Torrance, was the United States’ largest producer of the insecticide DDT.

Montrose Chemical dumped an estimated 1,700 tons of DDT into the Pacific Ocean by way of a Los Angeles County sewer pipe that emptied into the ocean through submarine outfalls off White Point on the Palos Verdes peninsula between the late 1950s and early 1970s.

The DDT entered the food chain after worms and microorganisms living on the ocean floor were eaten by bottom feeding fish. Increasingly concentrated DDT worked its way up the food chain, through fish-eating birds, marine mammals and birds of prey. Bald Eagles on Catalina Island became unable to reproduce after DDT caused their egg shells to become too thin to carry eaglets to term.

In 2011, UC Santa Barbara scientist Dr. David Valentine stumbled upon another concentration of DDT in the Catalina Channel, in barrels 3,000 feet below surface, while using a borrowed deep-sea robot.

Valentine is a researcher and professor of earth science and biology at UCSB, where he specializes in geochemistry, microbiology and marine science.

The first time he remembers reading about the DDT barrels was in a 1985 report by ecotoxicologist Allan Chartrand.

At the time, Chartrand was a young scientist at the California Regional Water Quality Control Board in LA. After reading about the DDT barrels, he called Montrose Chemical. To his surprise, he was given access to their old shipping logs. The logs documented Montrose’s dumping of more than 2,000 barrels of DDT-laced sludge each month into the Catalina Channel between 1947 and 1961.

“The report by Allan Chartrand did a nice job outlining that there was a major dumping campaign,” Valentine said in a recent Peninsula interview. “It was clear that he found evidence of it. But the magnitude, the nature of it, and where they were actually dumping, none of that was really known.”

In 2011, while studying methane seeps off of Catalina Island with a deep sea robot, Valentine  decided to take a few extra hours to chase down Chartrand’s lead from more than 25 years ago.

The robot descended 3,000 feet and slowly scanned the sea floor. It was there, Valentine discovered the dumping ground for Montrose Chemical’s DDT filled barrels. 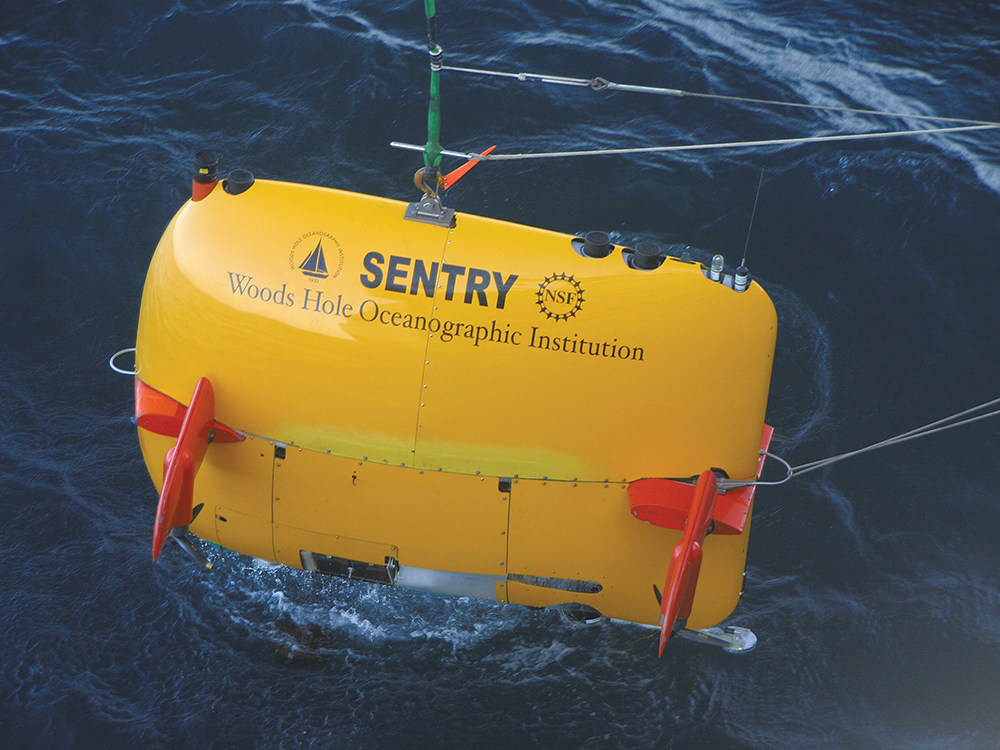 The Sentry is an autonomous underwater vehicle capable of exploring the ocean down to 19,000 feet. It’s made by the National Deep Submergence Facility and was used by Dr. David Valentine and his team to photograph DDT barrels dumped in 3,000 feet of water in the Catalina Channel.

Valentine and his research team found about 60 barrels and collected sediment samples between 2011 and 2013, while also doing other research in the area. Some of the barrels photographed looked to have been struck with an axe, presumably to help them sink.

The highest concentration of DDT observed by Valentine and his team wasn’t next to the barrels, but instead on a seamount, roughly 100 feet above the barrels.

“I can come up with hypotheses to try and explain how that could happen,” Valentine said. “You could have a barrel open on the way down, the barrel could have been opened and the material could have fallen out, or they could have taken all those barrels and consolidated them into a giant tank and just dumped the material from the giant tank into the ocean.”

“That’s why I was hoping to find somebody who remembered, or some sort of documentation about the handling,” Valentine said. “How much is actually there and where is it? Until we can answer that, we don’t even know the magnitude of the problem.”

In the 1940s, DDT was widely used as an agricultural and household pesticide. It was also used to treat typhus in World War II and was partially responsible for the brief elimination of malaria in Europe and North America in 1945.

The dangers of DDT weren’t widely known until 1962, when marine biologist and author, Rachel Carson, released Silent Spring. Her bestseller led to the U.S. banning DDT for agricultural use in 1972.

The U.S. and California both filed lawsuits against Montrose Chemical, and nine other facilities, citing damages to the marine environment. They settled their final lawsuit in 2000. The settlement included $140 million to help restore the Palos Verdes marine shelf, where the sewer emptied into the ocean.

“We’re all exposed to legacy chemicals like DDT in our food and in our water here,” said Amro Hamdoun, a researcher and professor at the Scripps Institution of Oceanography. “It’s just a fact that there are still residues of these chemicals present in the environment. We’re always exposed to them at low levels.”

Legacy chemicals are contaminates left in an environment by sources that are no longer active and that remain in the environment long after the sources are gone. Hamdoun has researched how legacy chemicals like DDT and flame retardants are transferred to humans through contaminated seafood.

“DDT doesn’t mix well with water,” Hamdoun said. “It will immediately try and find an oil-like environment to get into and the most obvious oil-like environment in nature is the cell membranes of living organisms. That’s why it accumulates in high levels in dolphins, and, unfortunately, breast milk.”

Hamdoun and his research team believe it’s crucial to identify the many pathways DDT could be taking to reach humans.

“If we can get a handle on that,” Hamdoun said, “we might be able to better predict which fish are likely to have a high concentration of DDT and at what time of year.”

Hoh sampled the blubber of eight dolphins that became stranded near the Southern California Bight, a stretch of curved coastline that runs along the California-Mexico border.

“I didn’t plan on looking at DDT,” Hoh said. “But what we found was the highest concentration of DDT in marine mammals in the world.”

Understanding the different types of DDT and how they break down in the ocean is important to finding out which fish are more likely to be impacted, according to Hoh.

“We basically have a huge reservoir of DDT in the Southern California Bight,” Hoh said. “We need to fully understand it or this could happen again.”

Hoh said that avoiding consumption of legacy chemicals is virtually impossible and that widening the amount of chemical compounds scientists test for could be another tool to better understand the scope of pollution off Catalina.

“Typically, the levels to which we’re exposed are not cause for immediate concern,” Hoh said. “Although we’re always unsure about what a lifetime of being exposed to these chemicals might be.” 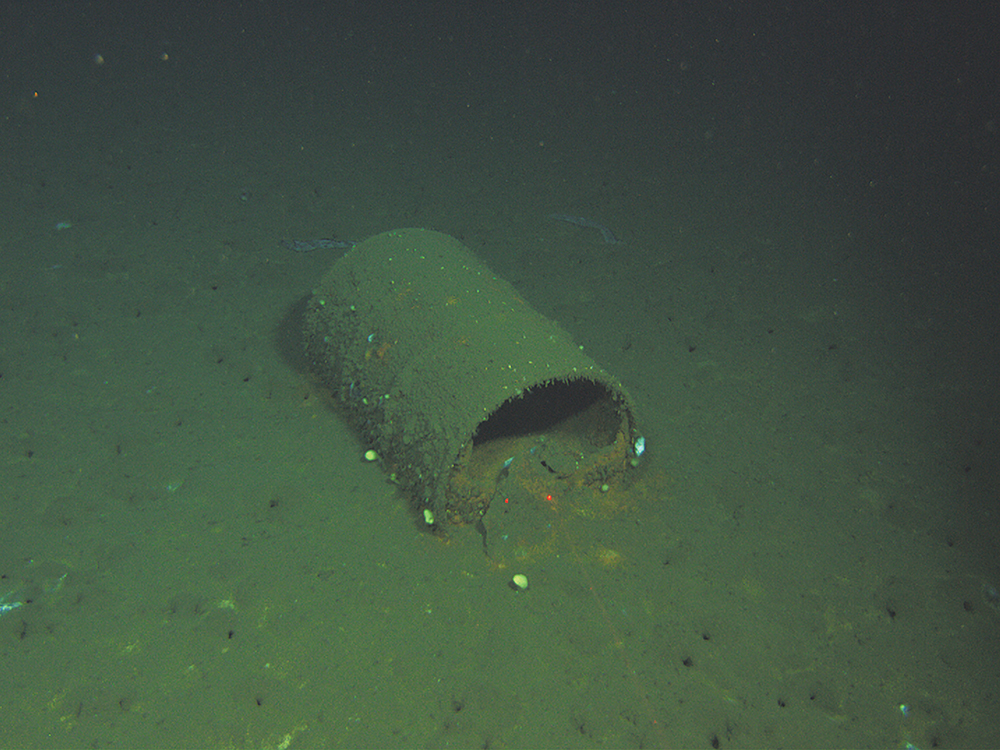 Barrels filled with DDT, off the coast of Santa Catalina Island, 3,000 feet below the surface. Photos courtesy of Dr. David Valentine, UCSB

The Future is Unwritten

Valentine didn’t release a peer-reviewed article about his findings off Catalina until 2019. But he did share photos of the DDT barrels with students and colleagues and even presented them during testimony at the United States House Committee on Energy and Commerce.

After a presentation in 2013, he was approached by a retired government employee.

“I had shown some of the photos,” Valentine said. “Somebody approached me in the dark parking lot afterwards and said, ‘Hey, I know something about this.’”

This source told Valentine where to look for additional documentation of the dumping. He said there’d been rumors that crew members from Montrose had admitted to the illegal dumping during legal depositions and that transcripts of their testimony existed.

Valentine and his team decided to take their findings to the Los Angeles Times, where it was assigned to Rosanna Xia.

“We had this story that scientifically is pretty incredible, but needed an investigative journalist to tackle,” Valentine said. “Obviously it worked out quite well because she did a bang up job with it.”

Xia looked for her old copy of Silent Spring after she and Valentine spoke. It had been years since she had thought about DDT. During her beat reporting about the coast she generally wrote about the problems of the future: communities at risk of flooding, animals on the cusp of extinction, the unimaginable amount of plastic accumulating in the sea.

“But for this story, I found myself digging deeper and deeper into the past,” Xia said. “There was so much to unravel, so many dots to connect for the public.”

One of the biggest challenges Xia faced was locating decades-old documents. Xia said that much of the scientific research dated back to when paper records were archived on microfiche. Many reports were never archived.

“And the issue itself – the dumping of thousands of barrels of DDT waste into the sea – was known only by a handful of people,” Xia said. “Even fewer people seemed to know the full scope of the problem. It took a lot of cold calling and tracking down of records to piece together what happened,” Xia said.

Xia’s article helped kickstart the scientific community into studying the DDT dumping and how it can be cleaned up.

On March 10, of this year, 31 scientists set out to survey nearly 50,000 acres of seafloor in the San Pedro Basin, near Catalina Island.  The mission was spearheaded by Eric Terrill from the Scripps Institution of Oceanography, who recognized the trip as a first step towards a wide scale clean up.

The scientists spent two weeks aboard the Sally Ride — one of the most technologically advanced research vessels in the country — using two deep sea robots to gather data and take photos of the DDT burial ground first discovered by Valentine in 2011.

Finding the barrels and raising the alarm was the easy part, Valentine said.