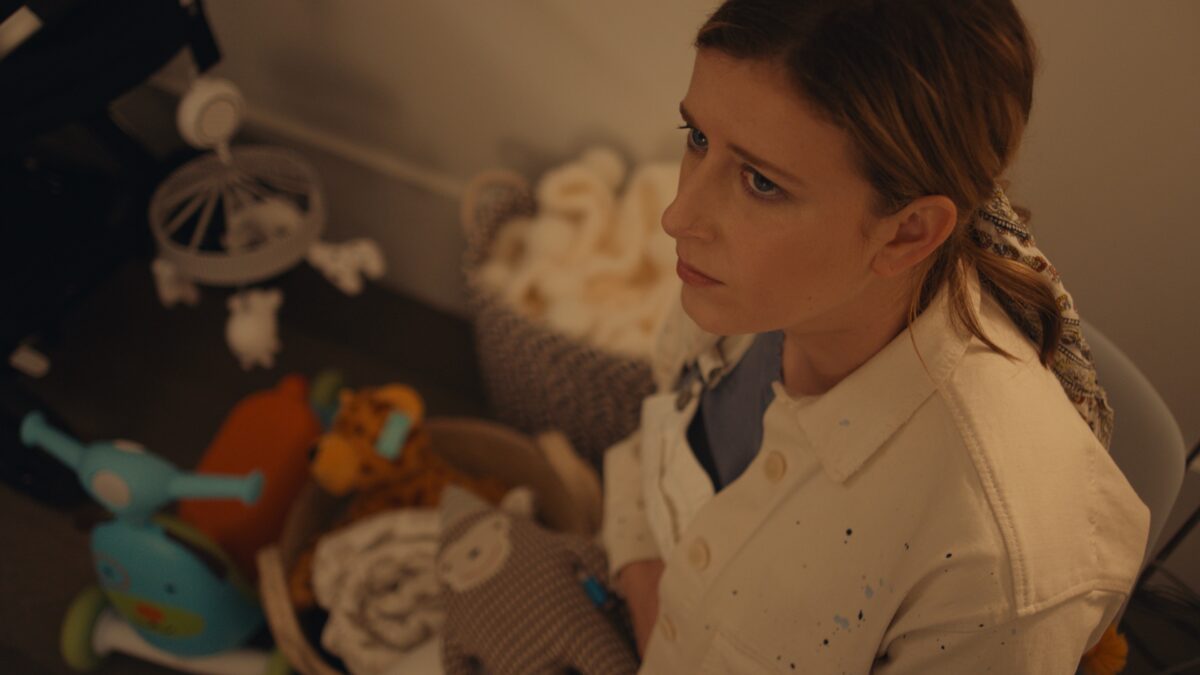 Genevieve Adams as Agnes in "Simchas and Sorrows." Photo courtesy of Gravitas Ventures.

Genevieve Adams, writer, director, and star of “Simchas and Sorrow” (Joys and Sorrows) has successfully waded into quicksand and come out unscathed. Telling a rather autobiographical story, Adams takes on the role of…herself.

Agnes, a struggling playwright who teaches an after school drama class to children, is your basic non-believer, in all the good ways. Raised Catholic, she’s smart, funny, curious, irreverent, and an Atheist. Religion might be a belief system but for her it’s a study in philosophy. Level-headed and open-minded, she agrees to convert to Judaism because it means so much to her fiancé Levi. That she has agreed to marry him, makes him very happy, even happier when she reveals her unplanned pregnancy.

Levi, terrified that his family will reject her and then him, is happy that she’s willing to do this and finds classes being led by the very liberal Rabbi Cohen, a lesbian who has a mindset Agnes can live with. 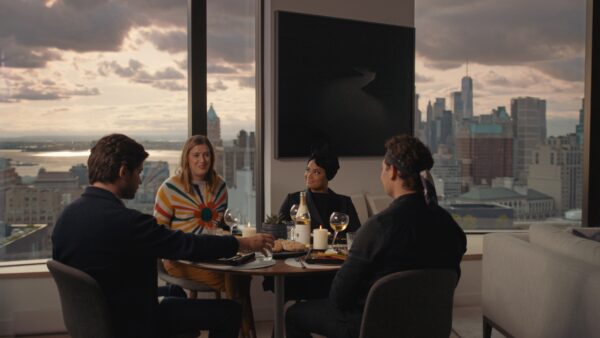 Thomas McDonell as Levi, Genevieve Adams as Agnes, Annelise Cepero as Glaucia, and Billy Calder as Abe in “Simchas and Sorrows.” Photo courtesy of Gravitas Ventures.

Levi’s brother, Abe, is taking more conservative classes with his non-Jewish fiancée Glaucia, a holistic lifestyle influencer. In constant competition with Levi and Agnes, they play a zero sum game. They not only have to be more holy, more healthy, and smarter, but they must belittle Levi and Agness and their efforts.

Agnes, down to earth, self confident and self aware, is having none of it. Trying always to support Levi, she will not be diminished by anyone, least of all his brother and Glaucia, the most pretentious people on the planet. Agnes, influenced heavily by her very fun and eccentric  grandfather Nate, an old coot now confined to bed, is bolstered by the fact that in his eyes, she can do no wrong and should stick to her own set of well-established values.

Conflict arises over a philosophical question about a Christmas tree, a commercial symbol that she refuses to repudiate. Agnes argues that she will be no less Jewish with a Christmas tree than without it, especially because her conversion is being done out of love, not belief. Levi, insecure, begins to question their relationship and fatally doesn’t stand up for her. 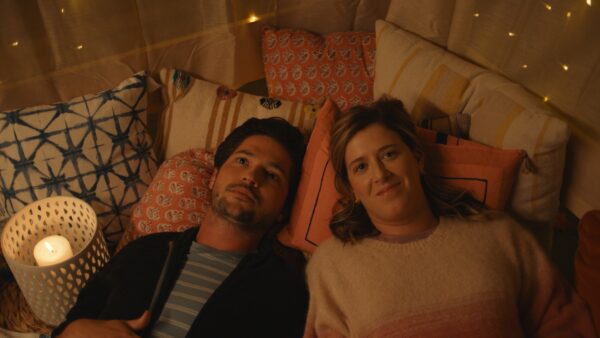 Thomas McDonell as Levi and Genevieve Adams as Agnes In “Simchas and Sorrows.” Photo courtesy of Gravitas Ventures.

Will they marry? Won’t they marry? Will she convert? Will he grow up? Gee, I wonder. That’s actually beside the point. This is a slight, fun film with interesting, if not entirely fully developed characters. It doesn’t matter. Questions are asked; some are answered. Adams’ Agnes is a strong woman with a healthy value system that benefits everyone. There are some very funny moments that will make you laugh. Look for the scene where she’s teaching some very precocious youngsters who expound on their various philosophies on life; and it’s not bad advice.

No one dies, everyone learns something, and almost everyone lives happily ever after. Well, spoiler alert, Grandpa Nate dies, but he was really really old.

Even though it’s Adams’s story, it’s as old as the hills, whether it’s the ancient Broadway chestnut, Abie’s Irish Rose or TV’s “Bridget Loves Bernie.” Genevieve Adams has written and directed a charming film that gave her a nice leading role. Although probably not the kind of film that will open big at theaters, it’s definitely one to watch on a streaming platform. Just sit back and enjoy. You don’t always need a masterpiece to have a good time. Quite the contrary.

Opening September 16 at the Laemmle Noho, it starts streaming on all Digital and VOD platforms on September 20.