Barsha lives up to its name, which translate as “abundant hospitality.” 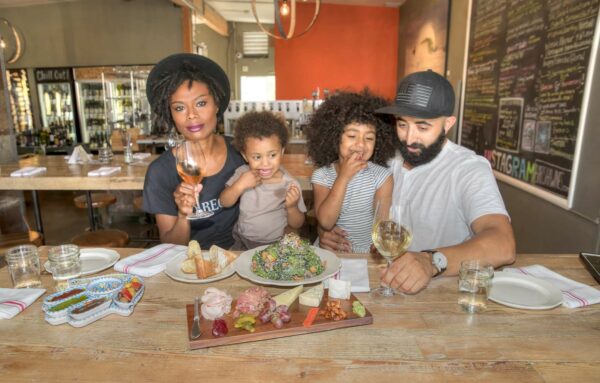 Barsha owners Adnen and Lenora Marouani with their children Sura and Pash at the table. Photo by Brad Jacobsen (CivicConch.com)

My favorite poem is “The Rubiyat of Omar Khayyam,” an extended meditation on life and death, pleasure and destiny, that was penned in 16th century Persia. The nineteenth century translator Edward FitzGerald brilliantly condensed the sprawling manuscript of more than 1,000 verses into a mere 101 quatrains, of which the most famous is

A book of verses beneath the bough,

A jug of wine, a loaf of bread, and thou,

Beside me singing in the wilderness,

That vision of how beloved company could turn a picnic into a paradise inspired a craze for Khayyam dinner clubs in the 1890s. Here, usually staid Victorians gathered to celebrate literature, food, and wine and live in the moment, as the poet bid them to do.

Those bohemian meals were a novel idea in an era of elaborate courses and neckties at the table for family suppers. While modern Californians like to think of themselves as open to all manner of dining experiences, we often dine at places that are joyless, without the human contact and sensuality that suffuses Khayyam’s verses.

For an idea about how this ought to be done, consider Barsha, a wine bar on Pacific Coast Highway in Manhattan Beach, which celebrates its fifth anniversary this coming weekend. From the outside, you might think it a typical liquor store, and for a long time it was. In the 1970s this was Marv’s Liquor and in the 2000s Sepulveda Wine Company, both of which sold beverages but were short on the hospitality side. In 2012, former restaurateur Adnen Marouani and his wife Lenora took over the place and named it Barsha, which means “abundant hospitality” in his native Tunisian dialect of Arabic.

About two-thirds of Barsha’s is devoted to retail beverage and gourmet items, a third to the wine bar, not that you’ll be able to tell that when you come in because the wine bar is usually full of people. There are comfortable sofas near the door, high tables at the center, and about eight stools at my favorite place, the counter where you get the maximum chance to converse with Adnen, himself. He’s exuberant, funny, and incredibly knowledgeable about food and wine. There may be no other person in the South Bay who takes such evident joy in providing hospitality. Since he hires staff people who have the same passion he does you will get good service no matter who you deal with, but once you have enjoyed his witty repartee you’ll want to talk with him again.

And when you do you‘ll probably talk about wine or beer, both of which are served here, but about food, too. The menu at Barsha is composed mostly of superb quality cheeses and charcuterie with a few salads and dips with bread. That part of the menu is headlined “Nibbles,” but plenty of people make a meal of it.

On a recent night, I was one of them. I started with three cheeses and some bresaola, the Italian dry-cured beef. Seven kinds of cheeses are offered. I selected Purple Haze goat cheese and Robiola from Italy and asked Adnen to select the third one for me. He asked if I enjoy blue cheese, which I do, and suggested an Irish Cashel. I put myself in his hands for the wine pairing, too and asked him to suggest a new experience. He obliged with a glass of Cortese from Idlewild Vineyards. That wine was indeed unusual, full-bodied white with a slight orange tinge that I would have taken for a red if served it blindfolded. There was a subtle tannin and spiciness to it, and while I waited for my food I enjoyed re-tasting it and savoring the way it became aromatic as it warmed and aired.

When the cheese and meat plate arrived there was more than just those items – the cheese board also included a dollop of berry jam, some fresh purple grapes, slivers of dried persimmon, and Tunisian-spiced almonds. Alongside were toasted baguette slices. The meat plate had more toast, some cornichons and a slather of lavender, whole-grain mustard. Mixing these sides and condiments brought out unexpected flavors in the meats and cheeses, as well as the wine. Between combinations you can reboot your palate with one of the Tunisian-spiced almonds, which are ideal for the purpose. The only North African seasoning most people know is the peppery harissa sauce, but the seasoning that coated these was mild and gently sweet.

Adnen and Lenora were both chefs before they opened Barsha, and the almonds aren’t the only prepared foods they make. Dipping sauces that are offered include hummus, arugula pepita pesto, and an unusual date tapenade that is sweet and salty and addictive. They also make the robust, thick, and garlicky Caesar dressing that is on the kale salads. I got one to go for my wife, who worked late, and we enjoyed it and some other nibbles after she got home. I regard the Caesar salad as a nearly perfect thing and don’t mess with the classic when I make one. But their version, which includes halved cherry tomatoes, mushrooms, and garbanzo beans, is pretty fantastic. They haven’t converted me to changing my recipe, but I’ll happily have theirs again any time.

Dinner at Barsha nearly always comes with a side of conviviality. Whether I dine at the tables or the bar I nearly always enjoy table talk with the people around me. Much of this is of the “What’s in your glass, and what do you think of the prosciutto?” variety, but other conversations have ranged far afield. On any given day it appears that at least half of the diners have walked there, making this the area’s sophisticated snack stop. If you’re not feeling like conversation then just sit facing the back wall, where silent movies play constantly. On a recent visit I enjoyed wine, charcuterie, and Charlie Chaplin, and that’s a combination to put a smile on your face.

Barsha turns five years old this Saturday and will be having a bash to celebrate (see the A LA Carte column for details or check Eventbrite). They have lasted this long because they offer the rare quality expressed in their name. Get that jug of wine and loaf of bread at Barsha, and stick around for the abundant hospitality while you’re there.