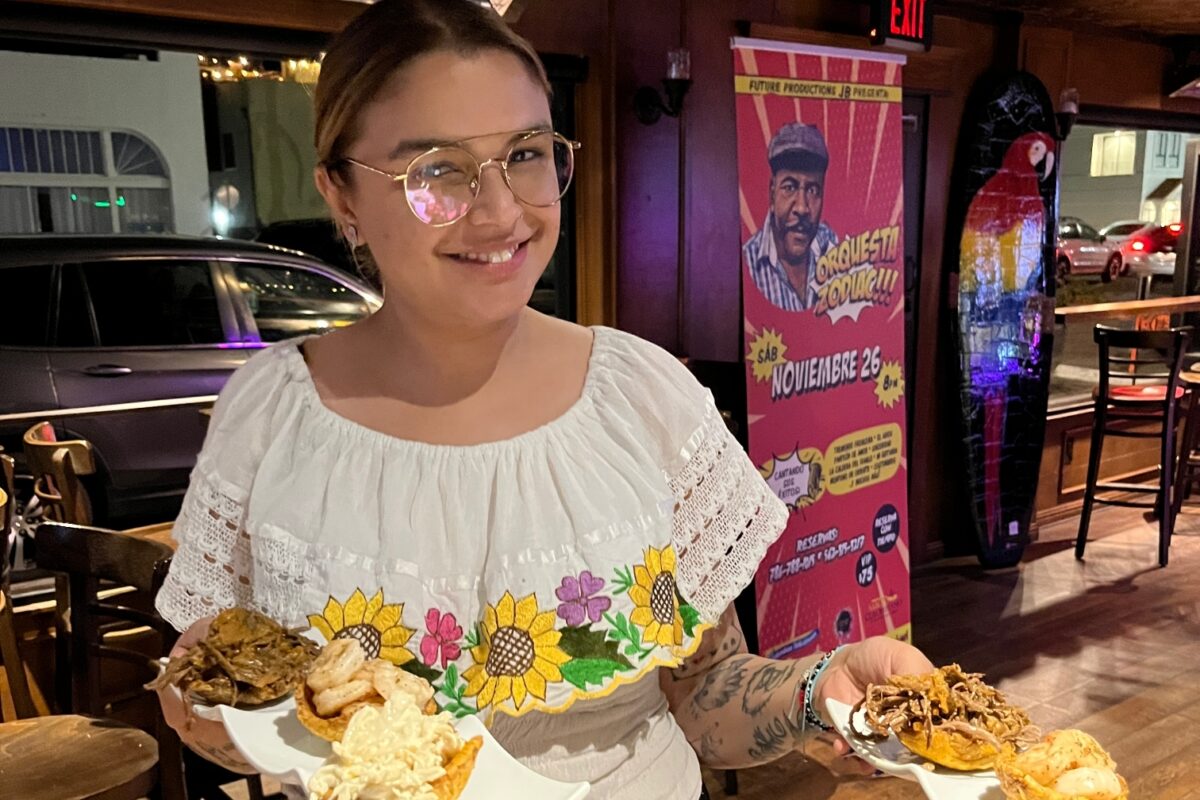 A server delivers an order of patacones. Photo by Richard Foss.

South American cuisines have been coming out of the shadows in LA during the last few years, with the South Bay no exception. A decade ago, we had two Brazilian restaurants – now there are nine. (Since we have had a simultaneous upswing in teachers of Brazilian style jiujitsu, those restaurants are presumably well-protected.) Peruvian food has been flourishing too, both in specialty restaurants and in contemporary places where Peruvian ceviche and saltados are presented with modern twists.

The latest culture to be represented locally is that of Colombia, a neighbor to both Brazil and Peru, but not very similar to either. Peru and Brazil have been multicultural for centuries, while Colombian food is more similar to Spanish traditions, while using some indigenous ingredients and influences. If you’d like to see what that is like, the place to go is Encanto on Hermosa Avenue. This space downstairs from Radici has been festooned with colored lights and fake plants, and pulsates with Colombian salsa music, while TV screens alternate with videos of the performers and sports channels. It’s a festive atmosphere and the most welcoming environment that I can remember at this location. 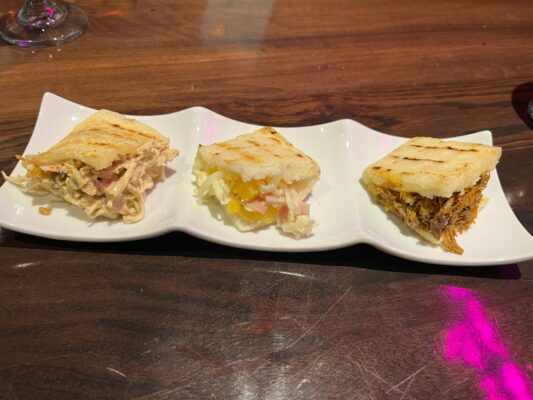 A sampler of arepas, thick tortillas that are split and stuffed. Photo by Richard Foss

The menu will be a little challenging to those who don’t know this cuisine. Some items are unfamiliar while others are made differently than you might expect. The empanadas are an example – most that you have had are made with flour and baked, but Colombians make them from cornmeal and fry them. If you order an appetizer of three, you get one shredded beef with bell pepper, one shredded chicken with mayonnaise, and one with seasoned mashed potato. That pattern is followed with other appetizers like arepas, thick corn tortillas that are split and stuffed, and patacones, plantains that are formed into cups and fried crisp before stuffing them. The stuffings may vary, and include a very fine seasoned shrimp with the patacones, but there are always three different ones unless you request otherwise. I recommend the patacones most highly, but they’re all worth a try, though they’re priced a bit high for the quantity provided.

Another starter that we tried is listed on the menu as rellena, which means stuffed. It’s eight slices of a sausage made with a mix of rice, pork, and peas, a variation of a peasant food that is like a casserole in a casing. The seasoning is mild, but the flavors melded in a way that I quite liked, though some may find the soft texture off-putting. The sausage was served with salty, fried, whole baby potatoes that have an almost miraculous texture, slightly crisp outside and almost liquid within. Those are offered as a side with many dishes, and worth having.

I have tried four main items, two of which were curiously named: Carne “La Toxica,” and La Costilla de Sugar Daddy. Carne Toxica really does translate to what you think it does, poisonous meat. The person who tried to explain this to me got as far as saying it’s a slang term of praise, and I’ll just believe that without going further. It wasn’t my favorite item because it’s made just as Colombians like their beef, which is well-done. The flavor of beef in a sauce of red and green bell peppers and onions was just fine, but I found it tough. It was served with both potatoes and white rice, and I chose creole potatoes, slices of boiled potatoes in the same sauce as the beef.

Costillas de Sugar Daddy are pork ribs braised in a sauce very much like teriyaki, made with pineapple juice, cinnamon, a smidgen of red pepper, and probably some coca cola. Marinating tough meats with acidic colas tenderizes the meat and lends a caramelized smokiness, and I think I detected the effect here. These are still a bit chewy because the ribs are slightly overcooked by American standards, but they’re worth having. 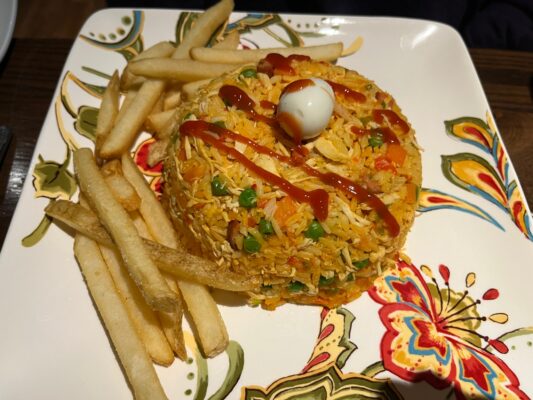 Arroz Guacamayo, the Colombian version of a paella. Photo by Richard Foss

We also tried Mojarra Parada, fried fish that was good but not outstanding and Arroz Guacamayo, a rice dish named after a macaw but not actually containing any meat from members of the parrot family. It’s a chicken, pea, and carrot paella by another name, and very close to the Spanish original in flavor. It’s topped with a quail egg and a drizzle of a mild sweet spice sauce, and among the best things we’ve had here. It’s served with french fries because meals in Colombia just aren’t complete without potatoes, so it is not for the carb-avoiding.

Encanto has a short wine list that has some rather random selections, plus soft drinks, fruit juices, and sangria. They’re waiting to get a liquor license so they can serve the rum punches that are popular in Colombia. Until they do, I recommend the red sangria, which is not over-sweet and has a nice mix of wine, citrus, and apples with a touch of cinnamon.

The meals are large, and we’ve only tried one dessert, the milhojas, layers of puff pastry, sweet cream, and caramel sauce. If you have a sweet tooth, you may think this is the best thing ever, but it was a bit much for me.

Encanto’s pricing is modest by beach city standards – starter plates are between $9 and $15, while the ample main courses are $19 to $25. On both of our visits the home crowd was much in evidence, and the Colombian community has embraced this taste of home. A meal here is an enjoyable experience for those who appreciate hearty food with depth of flavor, but not a lot of peppery heat, and if that describes you I suggest you stop in.