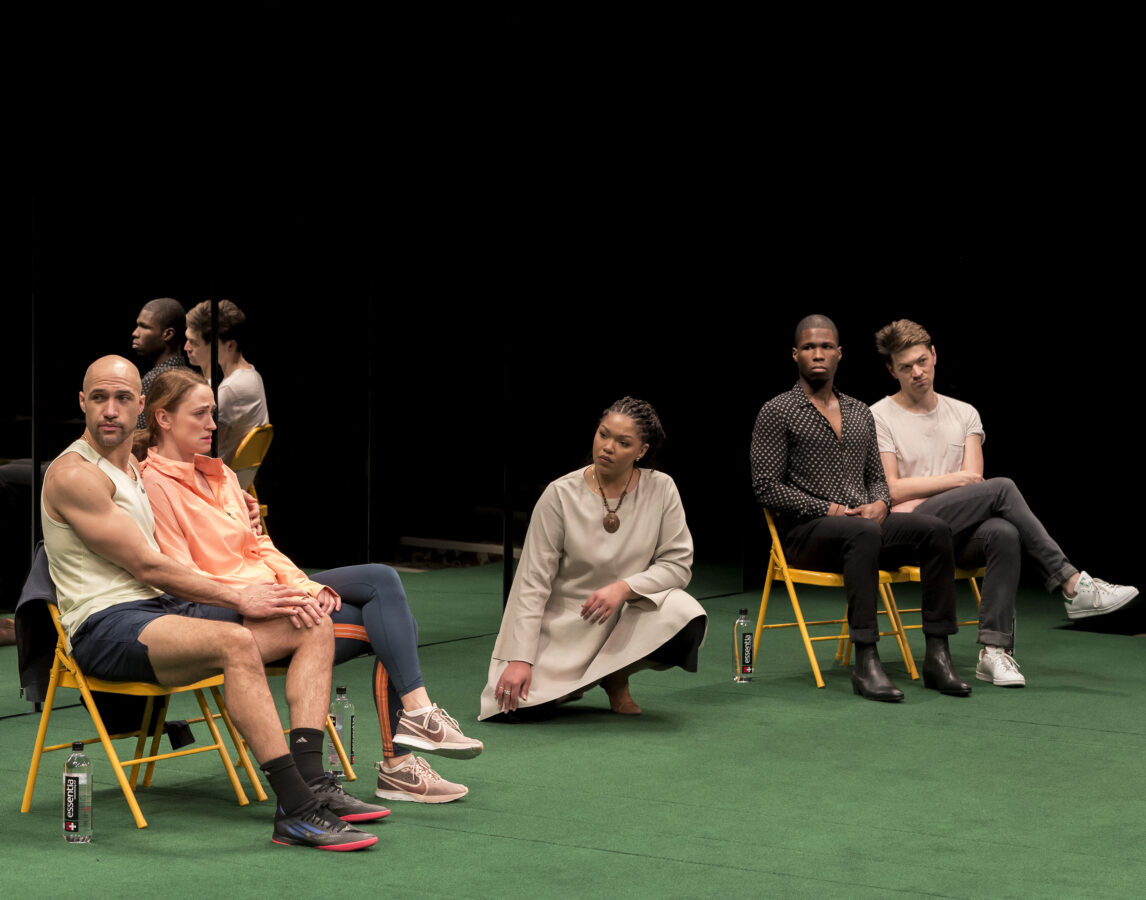 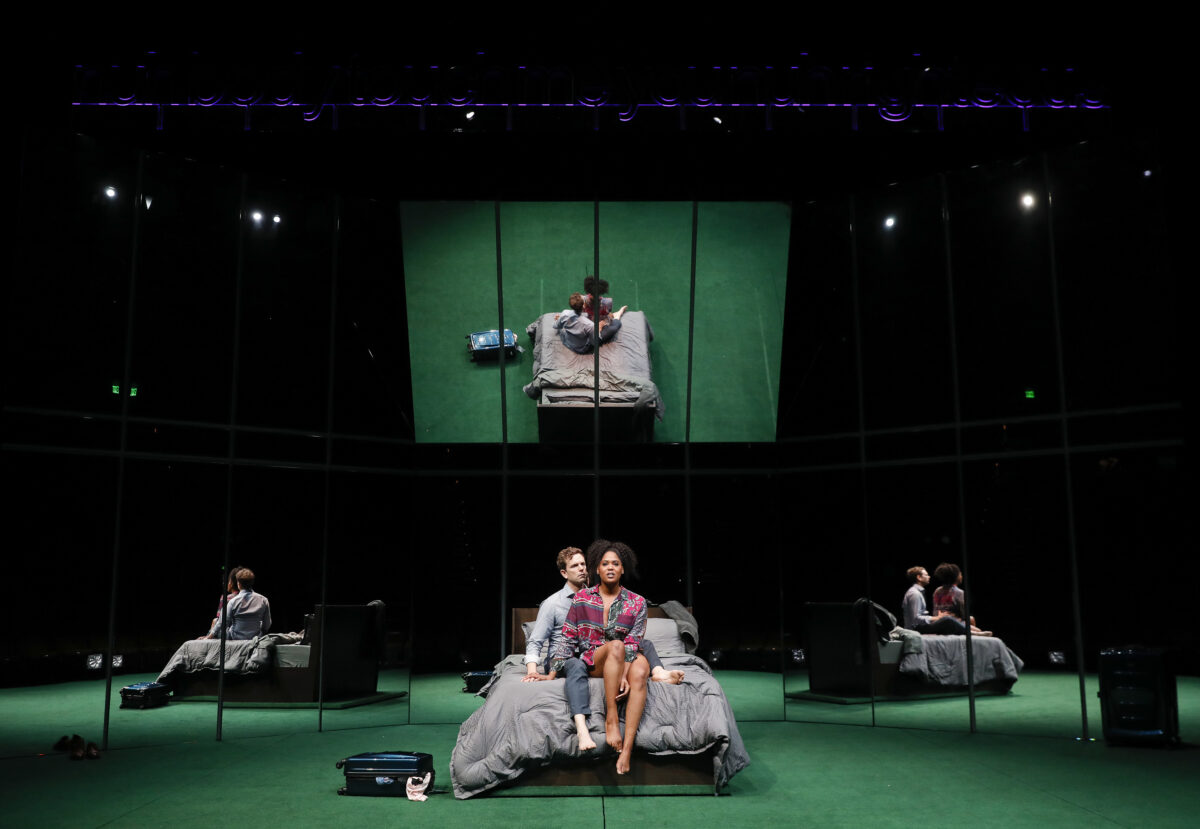 Provocative “Slave Play” at the Taper

What we’re faced with here is a dramatic piece of theater that does what art is supposed to do, which is to confront, challenge, engage, and provoke the viewer. It’s also both forceful and smart.

“Slave Play,” and let me stress that the “play” in the title should be understood as both noun and verb, has made many people uncomfortable because it explores sexual want and need and fantasy in the lives of three interracial couples, where the black partner has become dissatisfied or disillusioned with his or her partner, and the legacy of slavery is at the root of it (hence no Asians in the mix, despite one actor’s partial Asian ancestry).

Apparently all three couples have at least recognized that problems exist in their relationships because they’ve invested time and money in something called Antebellum Sexual Performance Therapy, which has entailed spending a few days at a retreat on the site of a Southern plantation. I think that the columned manor house we see near the wings of the stage is meant to be both real and metaphorical, but it certainly is the latter. The rear of the stage is also paneled in mirrors, and the effect of this, particularly in the second act, is to compel the audience to become indirect participants as well as direct viewers.

It’s hard to discuss “Slave Play” without mentioning that the first act is a setup (in more ways than one) for what follows. There are three vignettes in which the couples (white male, black female; black male, white female; white male, black male) have been tasked with acting out a fraught sexual fantasy, presumably as part of the therapeutic program for the roadblock in their intimate relations. The scenes, supposedly on a Southern plantation during the early- or mid-nineteenth century, are fairly graphic. In the first one, an overseer named Jim (Paul Alexander Nolan) rapes one of the domestics, Kaneisha (Antoinette Crowe-Legacy). In the second scene, the wife of the plantation owner, Alana (Elizabeth Stahlmann), orders the house Negro, Phillip, to undress and lie facedown on her bed. She then pleasures him with a big black dildo. In the third scene, a black boss, Gary (Jakeem Dante Powell), commands his white underling, Dustin (Devin Kawaoka) to arouse him sexually.

Again, it’s fairly explicit but not distastefully staged, the whys and wherefores of what we’re being shown a complete mystery. There’s also enough subtle humor in these vignettes to counterbalance the implied brutality. This isn’t to say that viewers won’t be shocked or at least astonished, but there’s a great deal of raw beauty and even a breath of fresh air in these portrayals. Why is that?

Largely it has to do with the excellent cast (an ensemble gem), the stage direction by Robert O’Hara, and the technical production, in particular the scenic design (Clint Ramos), lighting design (Jiyoun Chang), the sound design and original music (Lindsay Jones), and the costume design (Dede Ayite). Casting directors Taylor Williams and Victor Vasquez deserve a mention because the actors seem perfectly aligned with their roles as written.

Another reason why “Slave Play” is liberating is of course the carefully honed script by Jeremy O. Harris, an apparently audacious, fearless, energetic, and idealistic young man who’s also intellectually sharp and perceptive. I envy him his courage to create a work that doesn’t shy away from problematic scenes or language. He doesn’t dance around or avoid powerful words as if we were all still preschoolers.

Therefore, among other things, “Slave Play” reminds us that we’re adults, not juveniles, and there’s an unfiltered richness that bares all and doesn’t duck behind a veil of the politically corect or some such nonsense.

It’s in the second act that the audience realizes that the characters have been acting out a fantasy, a script within a script, presumably designed by the two therapists, Teá (Chalia La Tour) and Patricia (Irene Sofia Lucio), who bring the three couples into a communal room so they can discuss how their “assignment” made them think and feel. They emerge from backstage, dressed in contemporary street apparel, and it’s briefly funny because they suddenly seem “out of character” when of course they are simply in other clothes. Each pair sits together in metal fold-up chairs, spaced a few feet apart from the others. Bottles of water are set by the legs of their chairs, and yes it looks like a real, let’s-talk-it-through, therapy session. 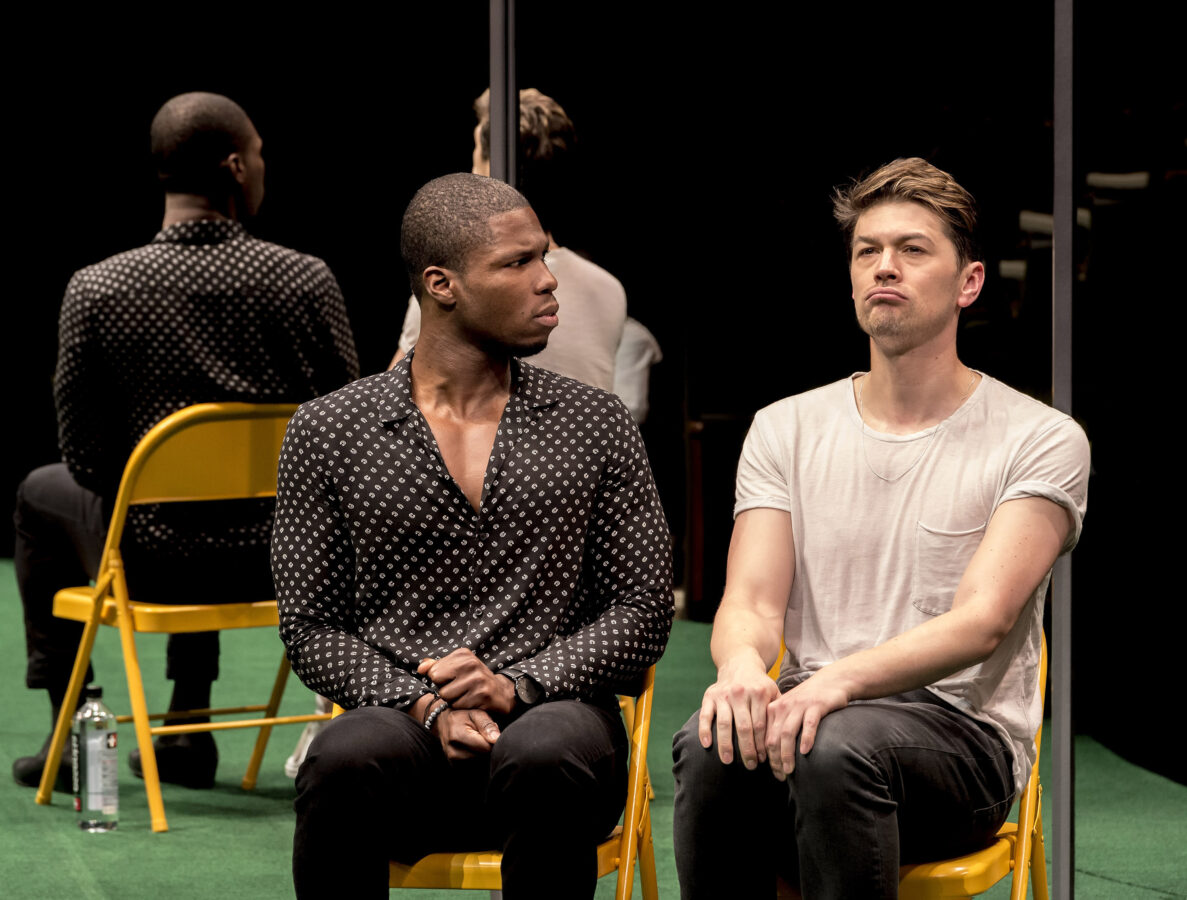 This part of the play walks a tightrope. The therapists ask some pertinent questions and offer up their observations, but Patricia and Teá struck me more as caricatures and, almost, but not quite, a comedic duo (running up to their clients with boxes of Kleenex, etc). This section runs on too long, and I’m guessing that Harris tried to pack a little too much into it. Probably it reads better than it plays. Also, the realization that both therapists, women of color, are in their own sexual relationship would best have been left out.

Any two people in a relationship are going to have different ideas or views about certain things. For example, in the very first scene, the overseer, Jim, tosses a cantaloupe on the ground and tells Kaneisha to get on her hands and knees and eat the watermelon. It’s not a watermelon, she tells him, it’s a cantaloupe. It’s a watermelon, he says. This goes back and forth, and it’s funny. On the cover of the program there’s a hand holding a cantaloupe, which makes me think that this isn’t simply a gratuitous, throwaway scene. No, what is absolutely clear to one person can be entirely something else, but also clear, to another. Another, deeper reading, though, is that people in power make the rules and name the names. That’s what dictators, of whatever stripe, can do with impunity.

Now, let me go back to the beginning. It’s the three black partners in the relationships who feel slighted, or inferior, or self-conscious when having sex with their white lover. Each case is a little different, and if I had the script of the play I could go on at length about specifics. Maybe the white characters were oblivious to the concerns of their black partners, maybe they never really listened (an issue which arises in the finale, about which I won’t tell you). One response to this might be that black Americans have deep, unresolved, feelings about being descended from slaves, and that, to this day, they bear a chip on their shoulders. We hear so much talk about “white fragility,” but do people ever talk about “black fragility”? After all, by and large, white folks still crack the whip and everyone else dances to the tune. 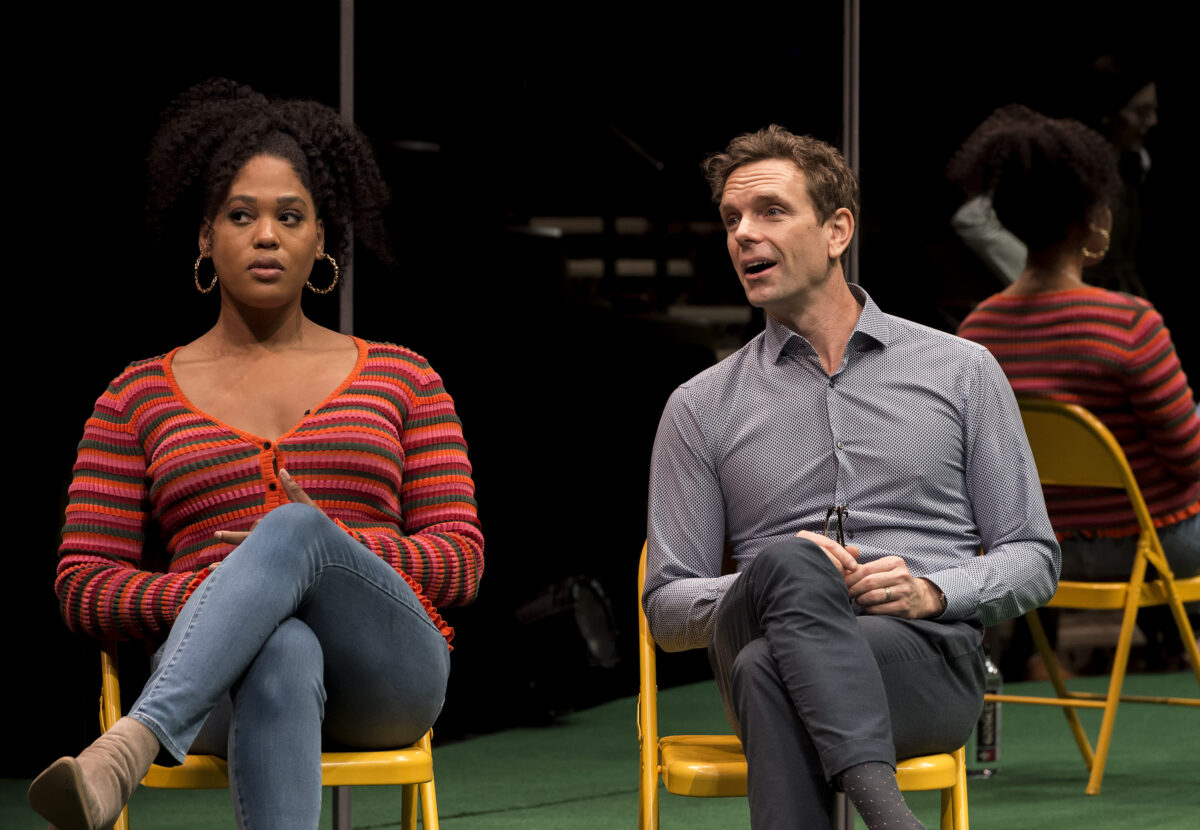 The play itself won’t resolve any of these issues, and there will be no cathartic moment. The ending does offer one “solution” which can be read in various ways, but the dialogue not only continues but is far broader than what Harris can put into just one play. For instance, these are all young couples. What if there was an elderly couple in the mix? A white man with two or three wives? A relationship in which there was a sizable age difference between the partners? And what if one of the black partners was from an African country whose people had never been enslaved or, better yet, was descended from one of the black tribes that sold other black people to white slave traders? What if the tables were turned and it was the white partners who were sexually dissatisfied with their lovers? For that matter, what if this play had been written by a straight white writer instead of one who is black and gay? How would such things color our perception, preconceived or otherwise?

To counterbalance the one-way dynamics of the play, it might have been enlightening, somewhere in all this, to present an older black-white couple who’d happily been together for 50 or 60 years. “Slave Play” shows us the issues that pull interracial couples apart, but what would be a positive and uplifting example of a successful interracial marriage?