Stories and photos by Phil Garner

Television influences us in ways we don’t expect. When I was young there was an endless stream of variety shows. It seemed that everyone hosted one. Singers, comedians and even a newspaper columnist shows. There was something for everyone. I think that influence explains my passion for diving locally. From Malibu to San Pedro you can see so many different creatures that it never gets dull. Some sites are dominated by kelp forests full of fish and colorful bottom dwellers. Other sites may be home to an incredible number of species, but hardly any fish. Some reefs are home to an array of small animals on the bottom while strange visitors from the deep drift overhead. 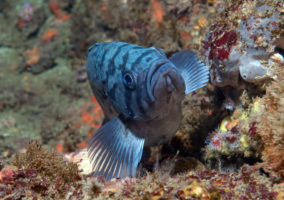 Fish in a variety of colors live side by side on the rocky reefs of Palos Verdes. Even the snails and slugs could fill a coloring book. You might run out of Crayons before you get halfway through. Even the eggs deposited by the marine inhabitants are visually impressive. Swell sharks tie their eggs to gorgonians and algae, leaving behind a Mermaid’s Purse that could double as a Christmas tree ornament.

I have spent an hour on the barge off Redondo Beach photographing nudibranchs, snails, Mola Molas, sea lions and jellies all on the same dive. Sometimes it’s hard to know which way to look. 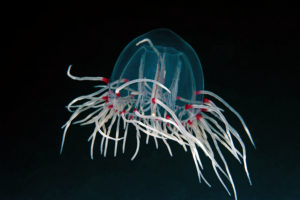 Diving in sandy areas such as Redondo Beach may appear dull and lifeless at first glance. But as the diver slows down and looks at the surroundings something incredible happens. Small animals are found everywhere. Shrimp scatter when approached. Flatfish cover themselves with sand, pretending to be invisible. Look closely at the tiny anemones and you may notice amphipods working the anemone polyps for food. Many animals spend much of their time buried under the sand. Nudibranchs can be found under small mounds of sand. Octopus hide anywhere they can. When they’re not moving across the sand they can be found in holes, bottles, shells or anywhere that offers a hiding place. I’ve seen an octopus carry around a kelp frond and remain behind it as I watched it.

Snails often have incredibly beautiful shells. Many of them, especially abalone are used to make jewelry and fine art. Anemones range from miniscule flowers of the sea to giant metridiums resembling cauliflower designed by Dr. Suess. Even algae comes in many beautiful hues, including iridescent blues and reds. Jellies range from minute animals not much more than a drop of water to giant sea nettles and purple striped jellies with tentacles twenty feet long. 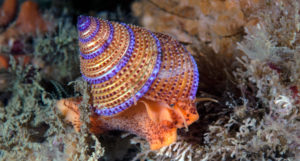 One of my favorite dive sites is a low lying rock pile off Haggerty’s. The reef has barely five feet of relief, yet it supports a unique biodiversity compared to nearby reefs. Nearly every rock has nudibranchs uncommon to the neighboring reefs. Juvenile rockfish dart under and over the rocks. Octopus scramble along the reef, and careful observers will find several octopus nests among the rocks. Although most fish on this reef are barely longer than two inches, Giant Sea Bass often cruise overhead. During a recent dive in poor conditions I made my way toward the surface early. Visibility was only a couple of feet and most of the animals kept themselves hidden in the rocks. As I neared the surface I was suddenly surrounded by the largest school of barracuda I have ever seen. Even on bad days the variety is endless. 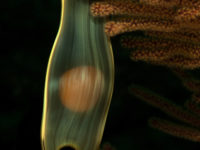 Kelp provides shelter for many animals on the reef, but the leaves of the giant plant are home to miniature reef systems of their own. Colonies of bryozoan take over kelp fronds, and they in turn become food and shelter for other marine life. Crustaceans and anemones appear in the bryozoan patches and nudibranchs no larger than a grain of sand can be found alongside their eggs. Large sheep crabs even climb the tall stalks in search of their next meal. 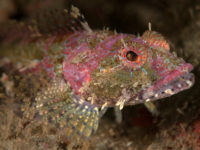 Many divers treat each dive as if it were a 50 yard dash. Slow down, look closely at each rock and stop to let the marine life come and check you out. You will be amazed at the variety of plants and animals the underwater world of the South Bay offers. When it comes to local diving, variety is indeed the spice of life.