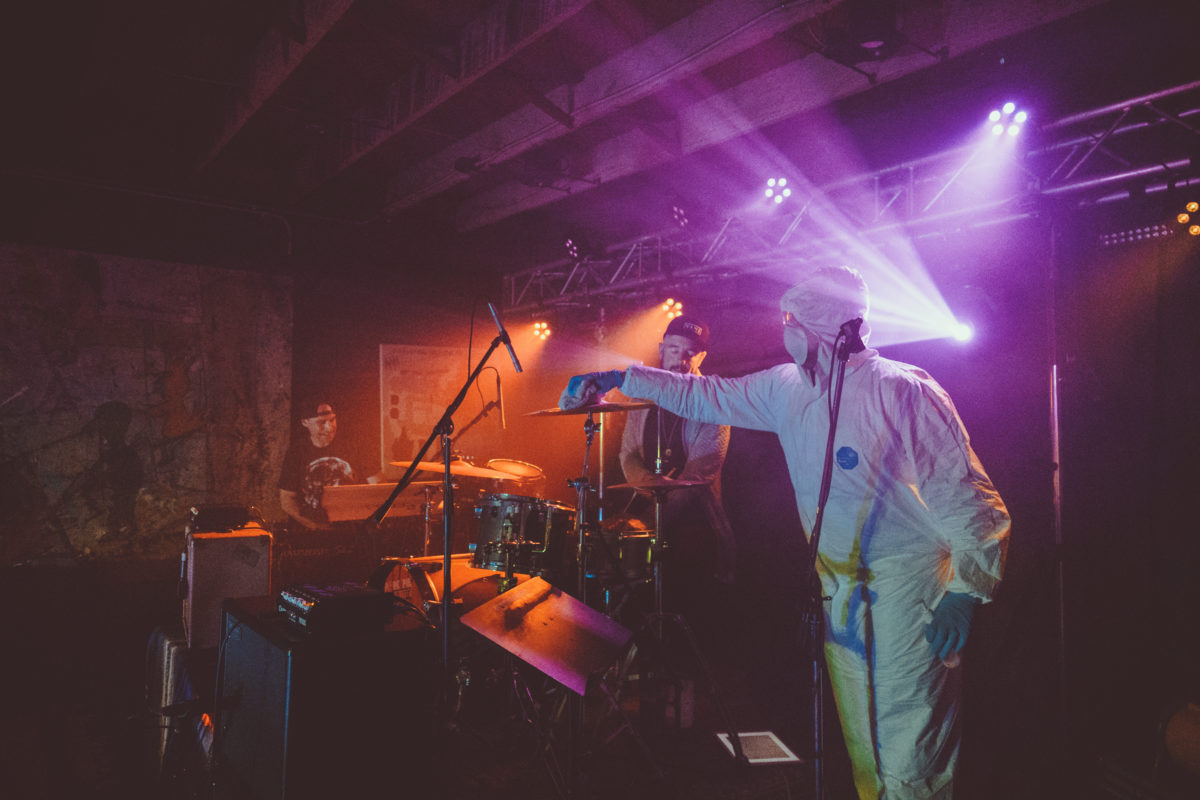 Musician Justin Panariello does double duty sanitizing gear during Sunday's South Bay Stream-a-thon, which raised money for musicians put out of work by the spread of coronavirus. Photo

Musician Justin Panariello does double duty sanitizing gear during Sunday’s South Bay Stream-a-thon, which raised money for musicians put out of work by the spread of coronavirus. Photo

About half way through the band Zeal’s Sunday afternoon set, a man in a white surgical gown, his face obscured by a respirator mask, threaded his way between an amplifier stack and a drum kit to apply some disinfectant. His feet were wrapped in sanitary plastic, and he walked with the deliberate slowness of a man navigating a patch of black ice. Keyboarder Steve “Shag” Aguilar tapped a few notes on his keyboard while he waited. Drummer Nick Hughes rustled the snare. Once the man in white retreated, singer Zeal Levin, satisfied that things were properly sanitized, launched into the next round of song.

The surreal scene unfolded for a tiny, socially distanced audience handling lighting and the soundboard, and for a much larger audience watching at home on screens of all kinds. The South Bay Stream-a-thon, as the event was known, was an attempt to help the area’s sizable community of musicians affected by the slow-down in social life caused by the novel coronavirus. The free stream included a link to a GoFundMe page and, as of Monday evening, was just $500 short of its $10,000 goal, all of which will be used to help musicians ride out a tough time.

“We were thinking, ‘We’ve gotta do this now, before we can’t do it at all,’” said Kevin Sousa, a musician and the founder of Hermosa Music Company, where the stream-a-thon unfolded in Hermosa’s light manufacturing district. The masked man on sanitizing duty was Justin Panariello, who plays bass with Sousa.

It was one of several ways the South Bay rallied this week in response to the grim news of the coronavirus. Many businesses are likely to be shuttered or limited in operations for at least the next several weeks, and public health authorities are urging residents, especially those most susceptible to COVID-19, the disease caused by the coronavirus, to limit public exposure as much as possible.

Even if the message about slowing life down for a while finally gets through, those at risk from COVID-19 may not have an easy time coping. That was on Colin Cooley’s mind last Wednesday. Cooley, a resident who, with his brother Brian, owns two retail stores and an advertising agency in downtown Hermosa, went on the Hermosa Beach Forum, a local issues Facebook page, and offered to help residents who may want to shelter in place, but are in need of essential groceries or prescription refills.

“We can’t just wait for the federal government, the county or even the city. We have to come together as a community to help each other out. Just on my street there are elderly people, and kids with respiratory illnesses,” Cooley said in an interview.

Hermosa resident Jessica Accamando saw Cooley’s post, and decided to push the idea further. She created a digital sign up sheet for people to use to indicate their interests. Accamando said she got the idea last week at a meeting of the Woman’s Club of Hermosa Beach.

“I was looking around me as we were talking during lunch, and I realized that most of the people in the room were in that higher-risk, over-60 category. And I’ve been working a lot lately with the Leadership Hermosa Class,” Accamando said, referring to the nonprofit group’s class of 2020 project at the town fire station. “And I realized that we’re all under that age range.”

She sent out a group message asking fellow Leadership Hermosa members if any were interested in volunteering, then spread the word more broadly on social media. As of Monday evening, about 80 people expressed interest in volunteering. The Beach Cities Health District has agreed to help lead a video seminar for the volunteers about techniques to ensure their do-gooder efforts don’t inadvertently spread the virus.

Sousa, who is also a licensed marriage and family therapist, said he was inspired to launch the Stream-a-thon after seeing how fear of the virus was impacting his patients. For him and many others, playing and hearing music provides a valuable release. The threat of COVID-19 has made that release harder to find. And it has also imperiled the already-fragile gig ecosystem on which many local acts depend.

To the mortification of public health authorities, many bars and restaurants in the South Bay and cities throughout the country had recently done normal or even above-average business as people shrugged off warnings about social distancing in an attempt to squeeze in one last party. But not long after Barley, the first musicians of the day, got started, Gov. Gavin Newsom appeared at a press conference to urge bars to close their doors, and for restaurants to slash seating or eliminate on-premise dining entirely. Then on Monday afternoon, the Los Angeles County Board of Supervisors announced that all bars, theaters, clubs and entertainment centers would be closed until further notice; restaurants are limited to takeout and delivery.

For local musician Kira Lingman, who along with V. Torres followed Zeal at the Stream-a-thon, it adds up to a lot of uncertainty. Lingman had at least a half-dozen gigs scheduled for the coming weeks. All are cancelled.

“Well, we were going to do Beach Life,” Lingman said of the Redondo Beach music festival, which had been planned for the first week of May but is now canceled. “And, now this basically kills my whole month.

Musicians are not the only ones affected by the closures. Joe Kattampallil, the production manager at Saint Rocke, was handling the sound board in the back of Hermosa Music Company on Sunday. It may be his last opportunity to adjust levels for a while. Saint Rocke is closed for at least two weeks.

In an effort to help local businesses, Manhattan Beach residents Sara McLoughlin Figel and Matt Figel started the website vitalicivitas.com to enable people to purchase gift cards and buy products online from local businesses that have to shutter or reduce operations because of the spread of coronavirus.

“[Vital Citivas] isn’t selling anything and it isn’t charging anything. We’re just building a sidewalk to bring you to your favorite local shops,” the founders wrote in a letter announcing the launching of the website.

Gift cards in particular, South Bay business boosters have pointed out, are a way to send money to businesses now, when they are short on funds. It’s a way of recognizing the seriousness of the threat coronavirus poses while also thinking about a future when it is under control.