Speaking Up for Planet Earth 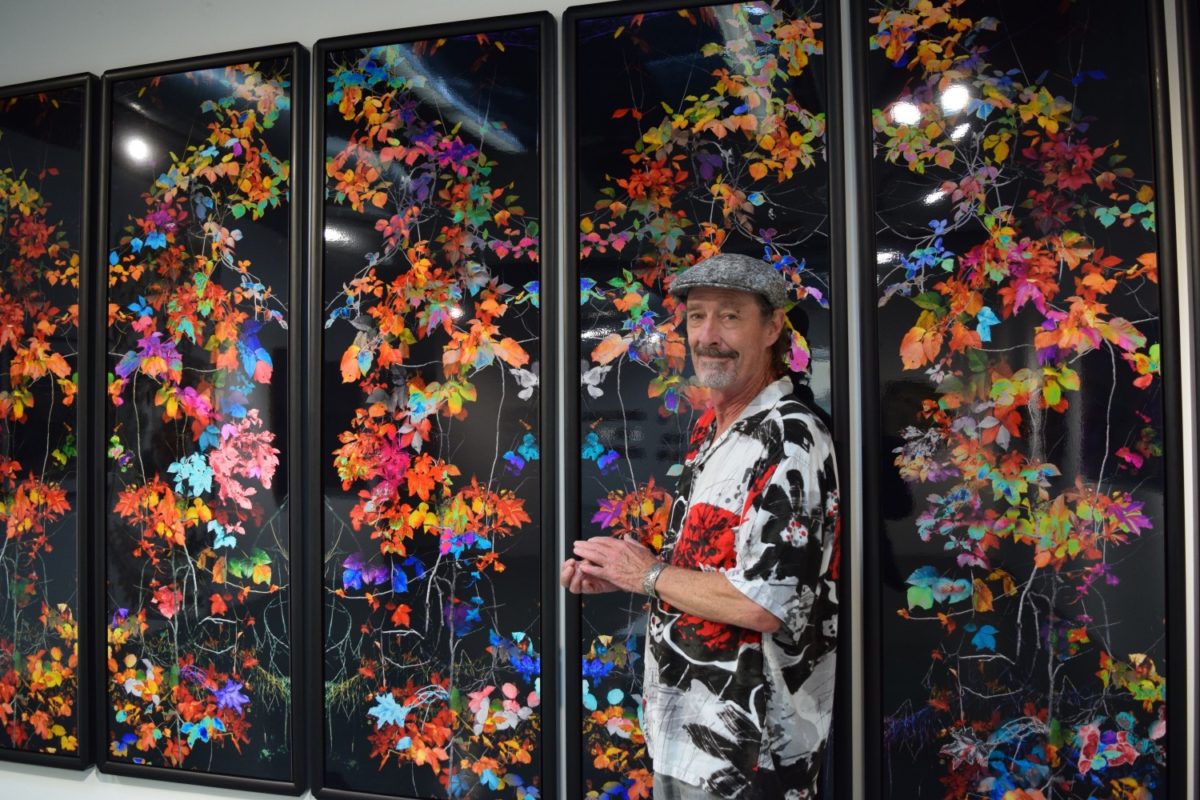 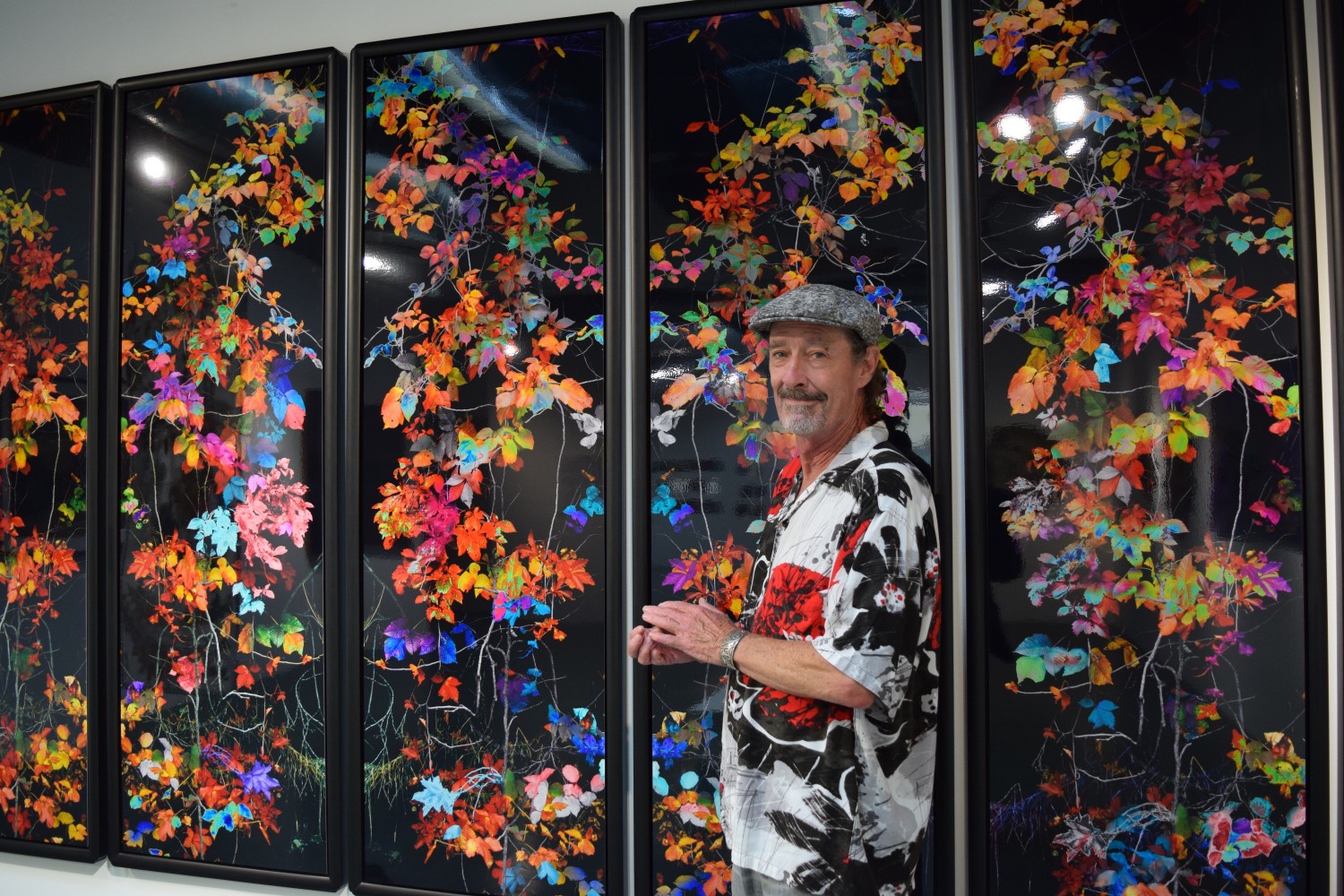 Anyone walking to the rear of the Manhattan Beach Art Center can be forgiven for thinking that the works on view, from landscape photography to embroidered screens and circular mandalas, are by several artists. After all, the group show, “Terra Firma: A Commentary on Land,” features six different men and women.

But the work in the second half of the central gallery? It’s by one person, Robert Glenn Ketchum, a Manhattan Beach resident whose imagery spans 50 years. He himself refers to it as a mini-retrospective but with an emphasis on his recent endeavors, which steps aside from traditional photography or, in Ketchum’s case, the gorgeous nature and landscape scenes upon which he’s built a stellar reputation.

His is an interesting and compelling journey, and the ride, as he’s noted, isn’t over yet.

In 1966, Ketchum was a freshman at UCLA. It was the era of the Byrds, the Doors, and Buffalo Springfield, and Ketchum spent his college years photographing bands up and down the Sunset Strip and getting many of his images published in The Daily Bruin newspaper.

Among his instructors at UCLA were Robert Heinecken and Edmund Teske, two photographers known for their non-traditional, experimental work (some years back, Heinecken had a solo show at LACMA, and Teske at the Getty). At the same time, trying to figure out his path in life, Ketchum chanced upon three books: Aldo Leopold’s “A Sand County Almanac,” John Lovelock’s “Gaia Theory,” and Rachel Carson’s “Silent Spring.” He says that reading them was like reading the Bible: “They spoke to me in a way that nothing else really did.”

In 1967, Ketchum and some friends drove up north to the Monterey Pop Festival (a multi-day event that highlighted such bands as the Jefferson Airplane, Eric Burdon and the Animals, and the Jimi Hendrix Experience). At the end of it, driving south, the group stopped for the night along the Big Sur coast on property owned by Elizabeth Taylor’s son called Limekiln Creek.

“When we pulled in it was like a little Monterey Pop was going on; there were already teepees put up and you could smell incense and people were drumming.” However, having endured music and noise for three days at the festival, “it was just more than I could digest.” By early morning it had started up again, so Ketchum told his pals he was going for a hike. He made it to the three-part finger of Limekiln Creek. “I just sat down next to the stream and this really remarkable, beautiful forest, which I eventually spent quite a bit of time photographing.”

Despite shooting bands on the Strip and his studies in school, this seems to be where “it” all began in earnest.

“He was actually making a political statement,” Ketchum says, “and I’d never seen anyone do that with a picture book (“Glen Canyon’s” underlying message was to warn against the further construction of dams on the Colorado River). I just thought that was a great thing, and you could weaponize that even more if you thought it out.”

But back to Limekiln Creek, and Ketchum says matter-of-factly, “I had a conversation with God and basically he asked me what I wanted to do and I said, ‘I want to be as good as Eliot Porter but I want to be effective politically. I want to defend the environment with the work. And it was sort of determined at the end of the day that if I just started acting like that it would happen.”

This isn’t to suggest that Ketchum knew anything about landscape photography. He didn’t.

“So I started studying Porter’s work, and I brought it up with Heinecken. And Heinecken said, ‘Why don’t you write to Eliot Porter? He’s in New Mexico and he’s still alive.’ And I did and he responded and,” Ketchum pauses and laughs, “I grew up to be a decent quote photographer after all.

“I never strayed from the course,” he continues. “I know that Rachel (Carson) was right, and that things were getting poisoned if we didn’t clean them up. And I know that Lovelock was right, that the planet was its own self-regulating mechanism, and if we screwed it up it was going to take us out and take us down. That’s more true now than ever. And I [adhere to] Aldo Leopold’s comment that you have a moral obligation to defend the environment that sustains your life.” 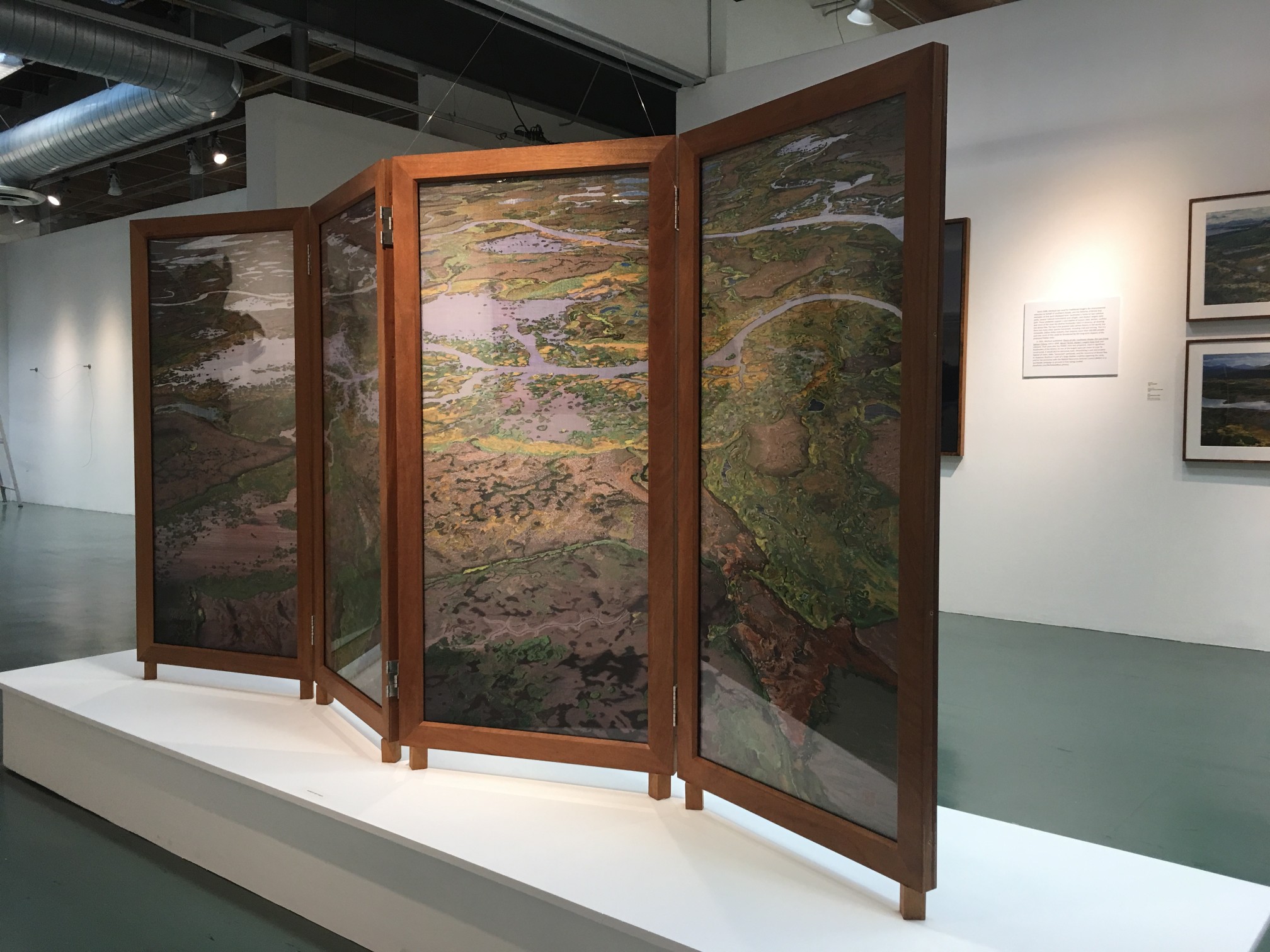 “YK Delta from 1500,” a four-panel loom weaving, with hand-painted dyes, gold thread, and peacock feathers. It replicates a photograph by Robert Glenn Ketchum and took six years to complete.

In 1986, Ketchum began what would become a 35-year collaboration with Zhang Meifang and the Suzhou Embroidery Research Institute (SERI), which came about through the UCLA-China exchange program. The embroidered work, of which there are two examples on display, isn’t the last word from Ketchum, but as he indicated to me before we met, “The textiles need to be closely seen to appreciate their crafting.”

Essentially, skilled embroiderers and weavers reproduced a number of Ketchum’s detailed photographs, although at first they were reluctant to even try, believing that what he was asking for was simply beyond their capability.

However, Ketchum says of the work, “with each one they got progressively more sophisticated and complicated, as you would expect when you keep pushing forward. The two in this show are of the five most recent.”

There’s the “Graceful Branch Movement” (2010), a hanging tapestry in the “Suzhou fine style” that incorporates 40 dye colors and took several embroiderers over three years to produce. The other work, comprised of four folding screens, is titled “YK Delta from 1500” (2003), and was created on a loom. Of the latter, Ketchum says, “It’s become an extraordinary art piece because the Chinese went to such great lengths to make it work.” Furthermore, he adds, “This is about as good as it gets… I’m asked all the time if this was done mechanically. None of this was (done) mechanically.”

I get the close-up, down-on-your-knees look and explanation of “YK Delta from 1500” and it’s truly an exquisite work; and, naturally, a rather costly creation when one considers the amount of time and labor that went into it. Ketchum paid in installments over many, many years.

Are there fine art collectors lining up for this sort of thing? Apparently not.

“Contemporary buyers don’t seem to have any trouble putting out a ridiculous amount of money for postmodern conceptual art,” Ketchum says, “but textiles is off on a world of its own. It’s not treated the same way, and this (piece) certainly isn’t seen as postmodernism.”

One might think that a savvy museum would realize the intrinsic value of these works, but this hasn’t yet happened. “LACMA has a very large Japanese textile collection,” Ketchum adds; “you’d think they would show some interest. They’ve got 27 of my photographs in their collection but pay no attention at all to these embroideries.” 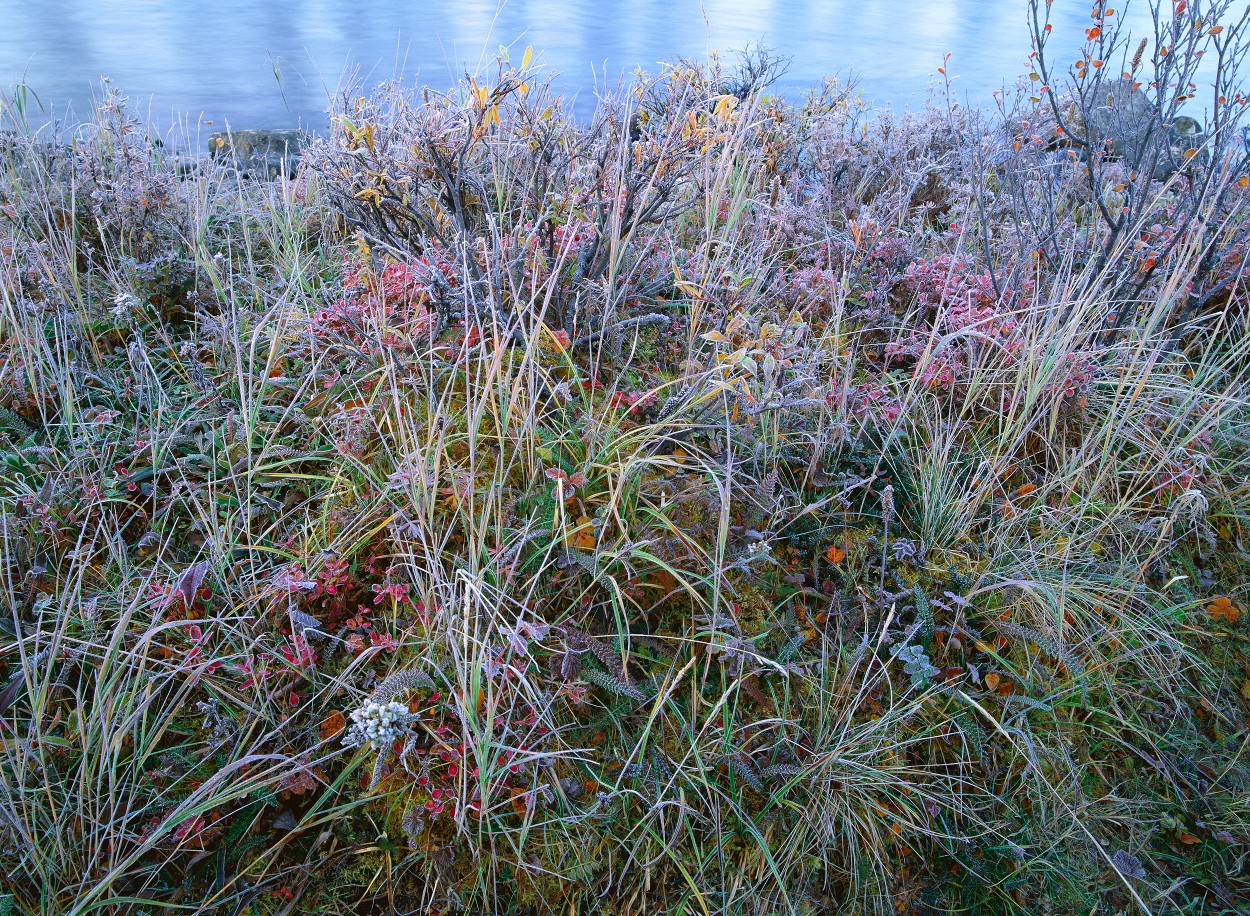 Despite the newer work, the glossy and colorful large panels (“Choose Joy”) and the circular mandalas printed on aluminum, Ketchum remains firmly committed to environmental issues, and it’s one key measure of who he is as an individual.

Specifically, he’s been attuned for several years to the ongoing debate over the proposed Pebble Mine project in southwestern Alaska. The site allegedly contains the largest concentration of undeveloped copper ore body in the world. On the other side of the coin, Bristol Bay is the most valuable Sockeye Salmon fishery on the planet. The contentious link between the two is this: Pebble Mine would be a massive open pit and it sits above Lake Iliamna, which feeds into the Kvichak River, which in turn drains into Bristol Bay.

The major concern regards the potential for wastewater pollution from the industrial site seeping into the ground and finding its way into the bay and affecting, in Ketchum’s words, “a really productive fishery, with 100,000 annual jobs; and it’s a completely renewable resource if you don’t overfish it.”

In short, despite precautions by the companies wanting to move forward with Pebble Mine, it would have catastrophic results if something were to go wrong. And many people are saying that the project is simply not worth the risk. The mine would not provide that many jobs, Ketchum says. “There’s just a lot of gold and copper and a lot of toxic pollution. And I’m not having that in my salmon fishery.”

In 1989, the Sierra Club presented him with its Ansel Adams Award for Conservation Photography.

Many years ago, Ketchum learned a valuable lesson when he spoke with Eliot Porter who lamented that his book on Glen Canyon was published too late to make a difference: the dam construction had already been completed. After that, Ketchum wrote in “Regarding the Land” (one of the several books he’s written or been included in), “I promised myself that I would dedicate my life and my photography to issues of evolving environmental concern. I wanted my work to make a difference in political decisions that were in the process of being made. I wanted my photographs to be useful as an activists’ tool.”

And so, he concludes, “Beginning with my first mildly provocative book, ‘The Hudson River and the Highlands’ (1985), I plunged into the world of making pictures regarding the land for political purposes, and I never looked back.”