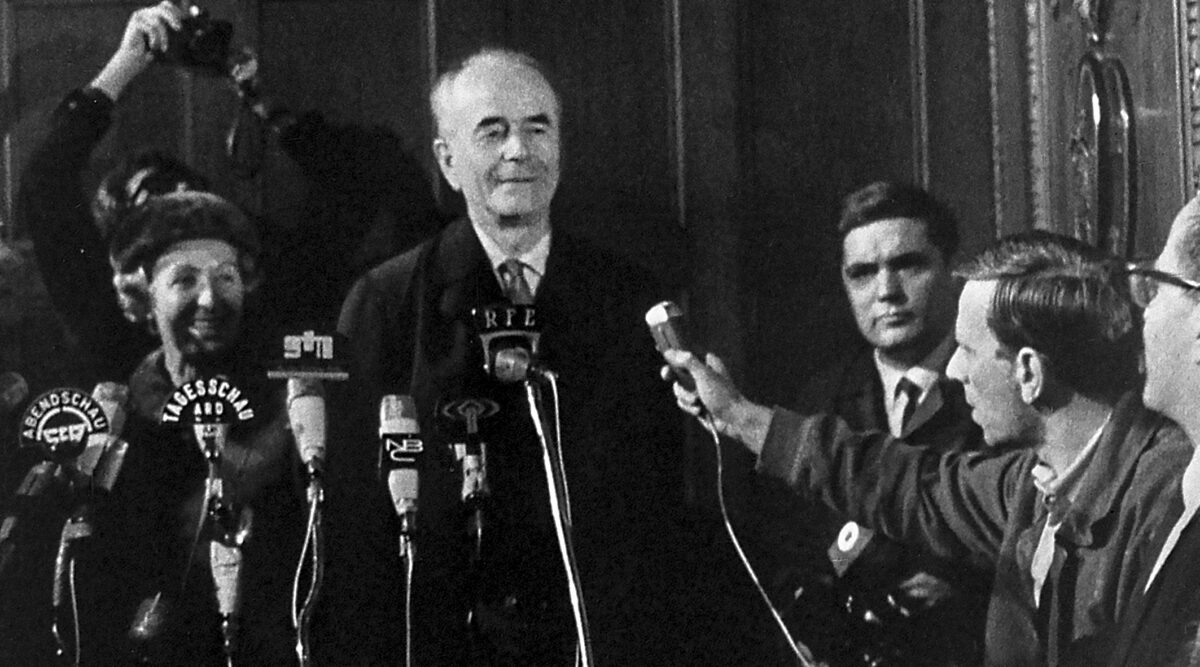 “Hannah Arendt coined the phrase “the banality of evil” when referring to Adolf Eichmann as he stood trial for crimes against humanity. Eichmann, despite his bland demeanor and claims that he was merely following orders, was directly responsible for the deportation and extermination of Jews in concentration camps. He carried out the Final Solution. A better example of the banality of evil would be Albert Speer who, spared the death penalty at the Nuremberg Trials, wrote a memoir that presented himself as the “Good Nazi.” People bought into his self-serving portrait and the book sold millions.

Vanessa Lapa, an accomplished Israeli filmmaker, gives us the opportunity to watch how that reputation was created. Speer’s autobiography, Inside the Third Reich, was released in 1969, three years after his release from prison. By 1971, Hollywood was banging down his doors for the option to his best-selling book. Paramount won the rights and assigned a promising but novice writer, Andrew Birkin, to come up with the screenplay. Birkin, armed with questions, spent several months at Speer’s country estate in Heidelberg interviewing the Nazi. Birkin recorded their interviews producing the 40 hours of audio tapes upon which this documentary is based. Even though Birkin digitized the cassette tapes, the degraded nature of the originals necessitated that Lapa transcribe them and recreate the dialogue with voiceover actors, which was done quite effectively.

Birkin, at Speer’s urging, collaborated on what would be a fictionalized version of the memoir because, as Speer was want to point out, a documentary might put things in a more negative light. Reviewing incidents in the book, Speer would “guide” Birkin toward a more socially acceptable model of the actions described. Never dreaming that these conversations would be anything but private, the manipulation of facts in evidence is extremely revealing, not just of Speer but also of Birkin. Birkin was clearly in sway to the former Nazi. He swallowed lies and half-truths hook, line, and sinker.

Speer’s lighting design in 1933 for the first Nuremberg Rally in the Zeppelinfeld Stadium brought him to Hitler’s personal attention. Impressed with the young architect, he was immediately anointed to a position of power and soon became Hitler’s personal architect. They would meet daily for a walk. Dewy-eyed when discussing his early interactions with the dictator who would become a close friend, one is reminded of the Nazi character Fritz Liebkind in “The Producers.” Liebkind, the original author of “Springtime for Hitler,” gazed into the distance when reminiscing, “Not many people know it, but the Fuhrer was a terrific dancer.”

One of the major strengths of this film is that there is no intervening voice putting these conversations in context. You are in the room as Speer instructs Birkin on how he wants a particular event depicted, even when it runs counter to known facts. He felt it was of the utmost importance that they create a movie where the audience would identify with Speer.

It is difficult to sit and listen to Speer spin his rationalization for the need for concentration camps. They were a necessity designed, as he pointed out, to house Hitler’s enemies—political dissidents and communists. As to the Jews? You couldn’t really have them in the center of Berlin, he pointed out, so they had to be relocated. Where? He had no idea. His anti-Semitism is veiled, well not exactly veiled but coded. After all, finding Jews disgusting isn’t the same as anti-Semitism, is it? In hindsight he claims that “small things are now seen as the center of the thing.” Anti-Semitism, a small thing?

Birkin was enthralled. Reporting on his progress to Carol Reed, the famous British director of films as disparate as “The Third Man” (a very famous film about a master manipulator in post war Austria), and “Oliver” (a musical based on the Dickens classic), warned Birkin that he needed to be careful of manipulation. He needed to be more dispassionate or he risked making Speer into a sweet man. Beware the whitewash. It does not appear that Birkin took Reed’s message to heart.

Speer was delighted by the declaration of war in 1939. War was the ultimate adventure. It offered him the occasion to travel to Paris with Hitler and the inner circle to take in the architecture of Paris. He envisioned himself as the architect for the new Napoleon.

Albert Speer in Belgium with the SS during World War II. Photo courtesy of the of Walter Frentz Collection.

In 1942, upon the death of Fritz Todt, Minister of Armaments and Munitions, Hitler appointed Speer as his successor, something for which he had no experience. What Speer did have, that Hitler valued above all else, was organizational skill and unquestioning loyalty. Speer brought that ability to his new position and soon he was managing factories that employed slave laborers in deplorable conditions. No matter, the factories were churning out the weaponry needed by Germany to fight their enemies. Speer was very organized and very efficient. The numbers of these workers expanded almost exponentially from 1942 (2.6 million) to 1944 (14 million) when the war was all but lost. But much like the comic figure Sgt. Schultz from “Hogan’s Heroes,” there is a constant refrain of “I see nothing. I know nothing.” His disingenuous statement the it wasn’t his job to get them, just to use them. He deflected the blame to subordinate Fritz Saukel whose responsibility it was to transport the workers. That so many died during transport under horrendous conditions was not his fault. He would successfully use this defense during his trial at Nuremberg.

As Birkin works with Speer on revisions to their script, he agrees to lower the death rates of the laborers and eliminate any mention of the involvement of the Krupps family industrial enterprises because the optics weren’t very good. And frankly, if Hitler had asked him about exterminating the Jews, again, something he claims to have known nothing about, he would have said that it was a colossal waste of labor. Nevertheless, all building projects were under his purview and that included the crematoria at the camps.

In a follow-up phone conversation with Reed, Birkin was again warned about whitewashing Speer’s deeds. A still skeptical Reed pointed out, you can’t build a crematorium without knowing what is happening inside. Once again, Birkin appears not to have taken his advice.

Speer was a master at spin. The footage from the Nuremberg Trials reflects that, as Speer arrogantly denies, defers, and denies again. It is chilling and not for the faint of heart.

In the end, Paramount canceled the project upon seeing the script and recognizing it as the whitewash Speer intended it to be. It is Birkin who refers to the naysayers as “Paramount and the Jewish Brigade associated with them.” Someone drank the Kool-Aid.

Lapa uses archival footage to underscore the taped narrative. The juxtaposition of reality with Speer’s fantasy and Birkin’s complicity is as chilling as a terrifying horror film from which there is no escape.

The Good Nazi lived a long and comfortable life, dying at the age of 76 in London. Birkin, whose career started promisingly under the tutelage of Stanley Kubrick, followed a rather mediocre path. Working intermittently on a handful of notable projects, such as the mini-series “The Lost Boys” and the film adaptation of “The Name of the Rose,” Andrew Birkin may eventually be known primarily as Jane Birkin’s brother and Charlotte Gainsbourg’s uncle.

In English, French, and German with English subtitles.

Opening  November 5 at the Laemmle Royal and the Town Center.