“Spin Me Round” – Dizzy [MOVIE REVIEW] 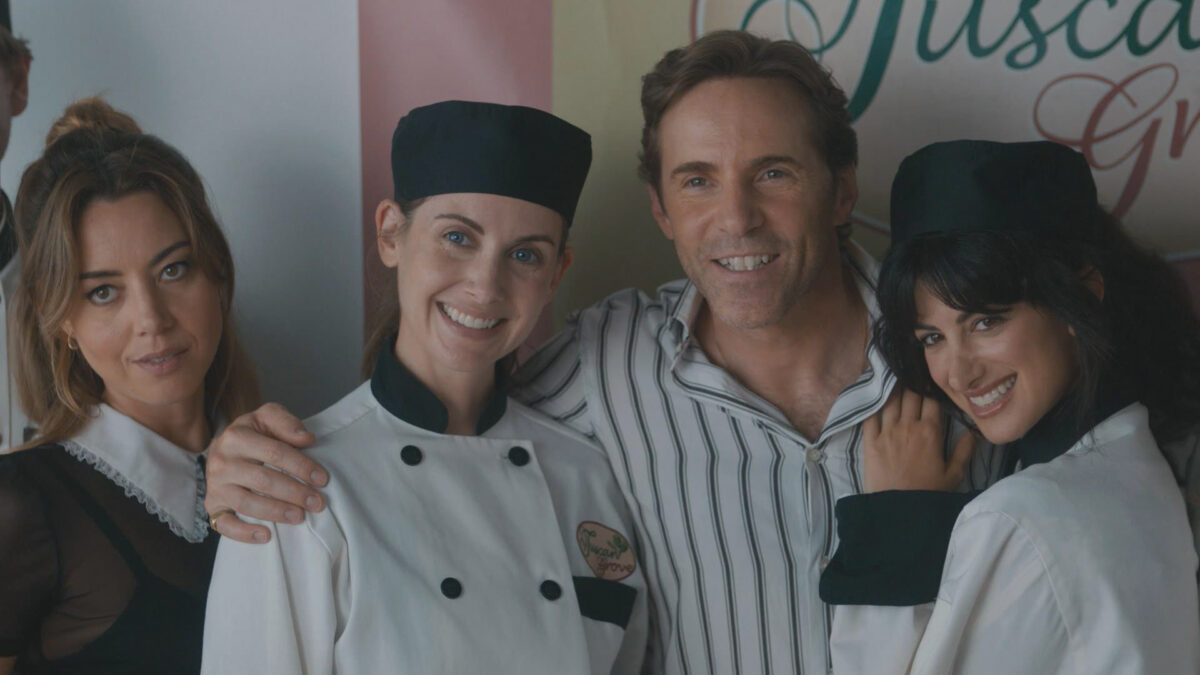 Aubrey Plaza as Kat, Alison Brie as Amber, Alessandro Nivola as Nick, and Ayden Mayeri as a fellow student in "Spin Me Round." Photo courtesy of IFC Films.

“Spin Me Round,” directed by Jeff Baena and written by Baena and Alison Brie, twirls around quickly, at times breathlessly, and always humorously. Slight in nature, and that’s no slight, the movie tells a story of aspiration, hope, and “be careful what you wish for” because it might be disappointing.

Amber is the shining manager of a chain restaurant called “Tuscan Grove.” Clearly a takeoff on family favorite The Olive Garden, the formula is a crowd pleaser — Italian-looking food, standardized at every restaurant, limitless quantities, and, above all, fast-food cheap.

Every year the Tuscan Grove corporation offers a few fellowships to star managers so they can learn the “Tuscan Way” at their headquarters in Italy. With an assist from her manager Paul, Amber was selected as a participant and she will be flown, all expenses paid, to Italy for the two week course. Beyond thrilled, Amber’s world has always been boring, predictable Bakersfield; she’s never even been outside the U.S. Before you can say “arrivederci,” her bags are packed and she’s on that plane, hopes high for learning and romance. 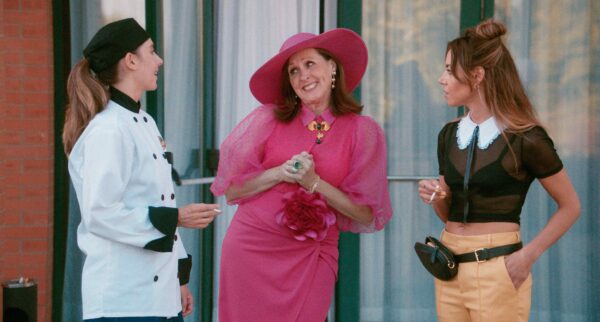 Alison Brie as Amber, Molly Shannon as Deb, and Aubrey Plaza as Kat in “Spin Me Round.” Photo courtesy of IFC Films.

Boarding the bus for their stay at the villa, she meets the other participants, all of them millenials like her with the exception of Deb, out of place for too many reasons to explain. Clinging onto Amber, she explains that the airline has lost all her luggage containing not only her clothes but also “important papers.” Sympathetic, Amber tells Deb that she’ll loan her whatever she needs because she overpacked, an opening that Deb abuses. But there’s more to come. Promised housing in the beautiful Villa, they are surprised as the bus passes it by. They will, explains Craig, the resident leader, be staying instead in a nice hotel, something of an exaggeration as it turns out. And instead of free time in the surrounding towns and villages, they will only be allowed out of the hotel when traveling as a group on pre-arranged trips. So much for the possibilities of romance.

Nevertheless, the first session is exciting, led by Liz Bence, a legend at Tuscan Grove. She knows all the ins and outs of packaged sauces, the difference between ragu and bolognese, and the herbs in common use. You’ll know everything you need to know about the beautiful, vacuous other women in the program as the camera focuses on one, blindfolded, trying to guess what plant she holds in her hand. It’s rosemary, one of the most distinctively fragrant and easily identifiable herbs imaginable, but she comes up with basil, mint, oregano, and multiple others, never arriving at the correct answer.

But an even bigger thrill occurs on that first day, the personal appearance of creator, chef, and owner of the Tuscan Grove chain, the very handsome Nick and his beautiful assistant Kat. Scanning the room with his iridescent smile and sparkling eyes, he approaches the men with an awkward handshake, and all the women with the European double check kiss. All the women, that is, except Amber who gets an “accidental” kiss on the lips. 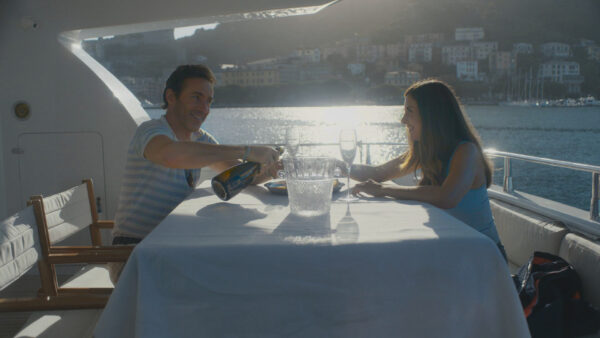 Alessandro Nivola as Nick and Alison Brie as Amber in “Spin Me Round.” Photo courtesy of IFC Films.

Before you know it, Kat has scooped up Amber on one pretense or another, and invites her out for a secret rendezvous. Under the pretense of a migraine, Amber leaves the group and gets into Kat’s car. But it’s not the two of them on an adventure. Kat is Nick’s groomer and soon Amber is on Nick’s yacht for an afternoon of intimate conversation where each confides secrets. It’s a dreamy afternoon and Amber, an interesting combination of naive and wary, is well on her way to being seduced. It’s a day out of a romance novel and there will be more to come.

Kat, part of Nick’s hard press, takes her to a fancy salon for a slinky gown for a private party that evening. The saleswoman gives Kat a knowing look that says (actually she does say) “is this the latest whore?” The party is being given by Nick’s good friend Ricky, a famous artist, and Amber, in her revealing gown, is a big hit. Everyone, especially Ricky and his voluptuous wife, are drooling over Amber, fighting for her attention. This sure ain’t Bakersfield! Before a fight breaks out, Kat rescues her and the scales begin to fall from her eyes. Embarrassed, she just wants to go back to the program. 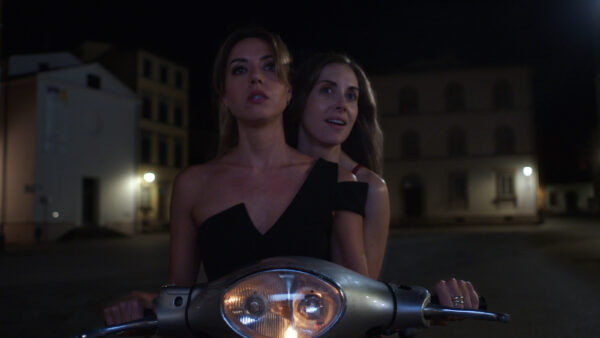 Aubrey Plaza as Kat and Alison Brie as Amber in “Spin Me Round.” Photo courtesy of IFC Films.

Lo and behold, Amber’s return triggers the “absence” of one of the other girls. As Amber sees her being led out to Kat’s car, her jealousy kicks in. Digging a little deeper, she realizes that only women have been invited to the past programs. That there are two men this time may be related to their androgenous names — Fran and Dana. Something nefarious is afoot and Amber and Dana work to uncover the conspiracy. People have disappeared. Are they being poisoned? Why can’t they leave? Where is everyone going? And why is Amber heartbroken over Nick when she knows she should be more self-aware? And like Dorothy, Amber wishes she could go home but she has no ruby slippers and Craig has her passport.

Looking for answers that are obvious, at least for the audience, Brie and Baena have hidden the clues in plain sight, and all of those clues point to sex that is both mundane and simple, and finally outrageous and hilarious. Suffice it to say that the villa’s semi-wild baby boars play a part. There are sight gags, over-the-top situations, and some startling lines of dialogue that are as laugh-out-loud funny as they are inappropriate.

Director Baena keeps everything moving swiftly enough that the occasional lulls don’t resonate. The pace is helped enormously by the cast, many of whom are veterans of improv and know how to play to the various situations. Led by Alison Brie as Amber, she follows the adage that if you want a good part for yourself, write one. And she did. Best known for her leads in “G.L.O.W.” and “Community,” she also has made an impression in feature films like “The Post” and “Promising Young Women.” She also starred in and co-wrote (with Baena) “Horse Girl.”

Alessandro Nivola as Nick almost makes you believe, or at least question, if  he’s sincere. He’s had a successful career both on stage and in film for many years including roles in “American Hustle,” “Laurel Canyon,” and “Junebug” to name a few.

Aubrey Plaza, Kat, is an accomplished features and television actress, most notably for her award winning role in “Ingrid Goes West.” A member of the Upright Citizens Brigade Theater, one of LA’s preeminent Improv groups, she also recurred in “Parks and Recreation.”

Molly Shannon shines as the clingy Deb, doing what she does best, portraying needy, insecure, inappropriate women who crave all the sunshine and ultimately remove all the air from the room.

Last, although the film is filled with other very talented and funny actors, is Fred Armisen, as Ricky, who has never met a role where he couldn’t slyly and unexpectedly steal the scene. Perhaps it’s his innocent, guileless face that lulls you into thinking he’s something he isn’t until POW, he delivers that stealthy knockout punch.

Not everything in life has to have a deeper meaning. Sometimes you just need to kick back, relax, and enjoy. “Spin Me Round” is just what’s on order.

Opening August 19th at the Landmark Westwood, the Laemmle Monica Film Center, Laemmle Glendale, and the Laemmle Town Center 5 in Encino, as well as on AMC+, and On Demand.