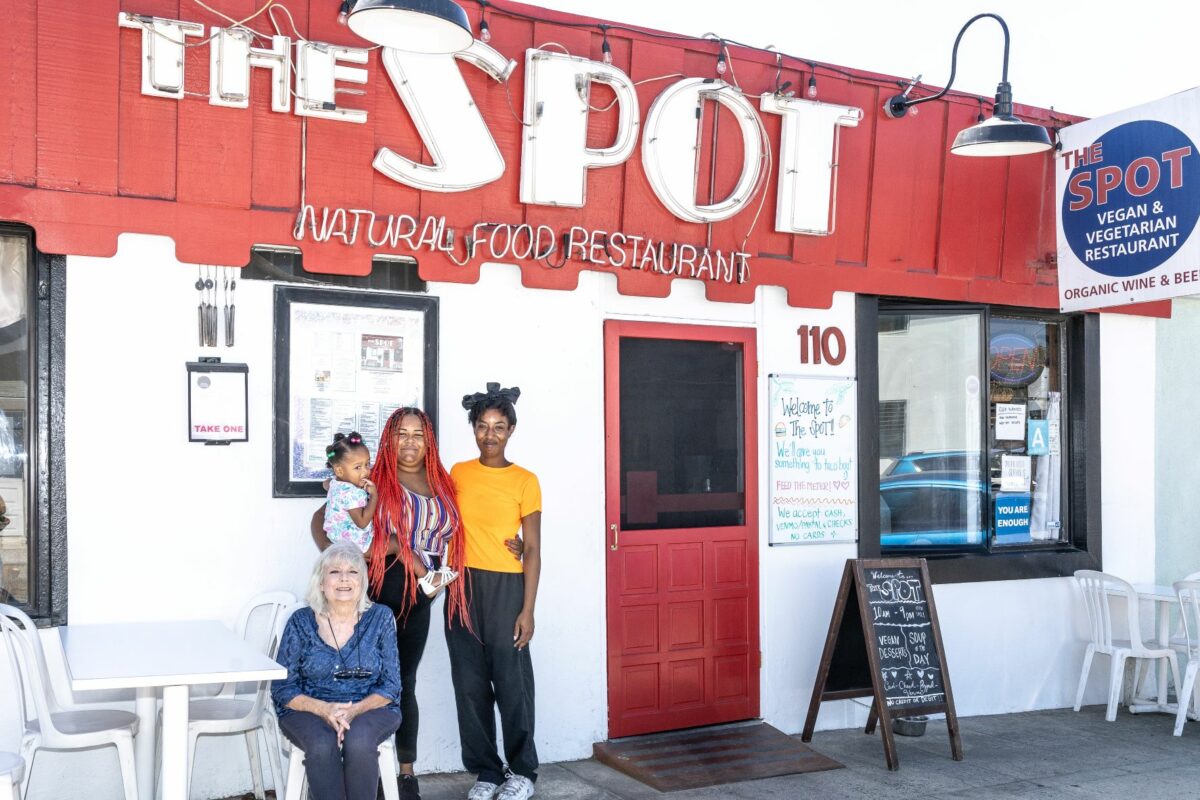 Tonya with her daughters, Amber and Tai, who both help out at The Spot, and granddaughter, Royalty. Photos by Bethany Willetts

When Tonya Beaudet, and her late husband, Maurice, took over The Spot in 1981, it was one of three vegetarian/vegan restaurants in Los Angeles.

“We closed on Tuesdays to visit LA’s only other two vegan restaurants, The Golden Temple next to the old Farmer’s Market; and Follow Your Heart Cafe, in the Valley,” Beaudet recalled.

In recent years, the choice of vegetarian/vegan restaurants in the Beach Cities, alone, has expanded to include il’ Vegerie, Green Temple, Pura Vita, Veggie Grill, and Grain Cafe.

Despite the competition, The Spot continues to attract old and new customers with Beaudet’s original menu, based on her Southern grandmother’s use of beans, collard greens, and whole grains. Her few notable additions to the menu are tofu; tempeh; agave for sweetness; and organic wine and beer. 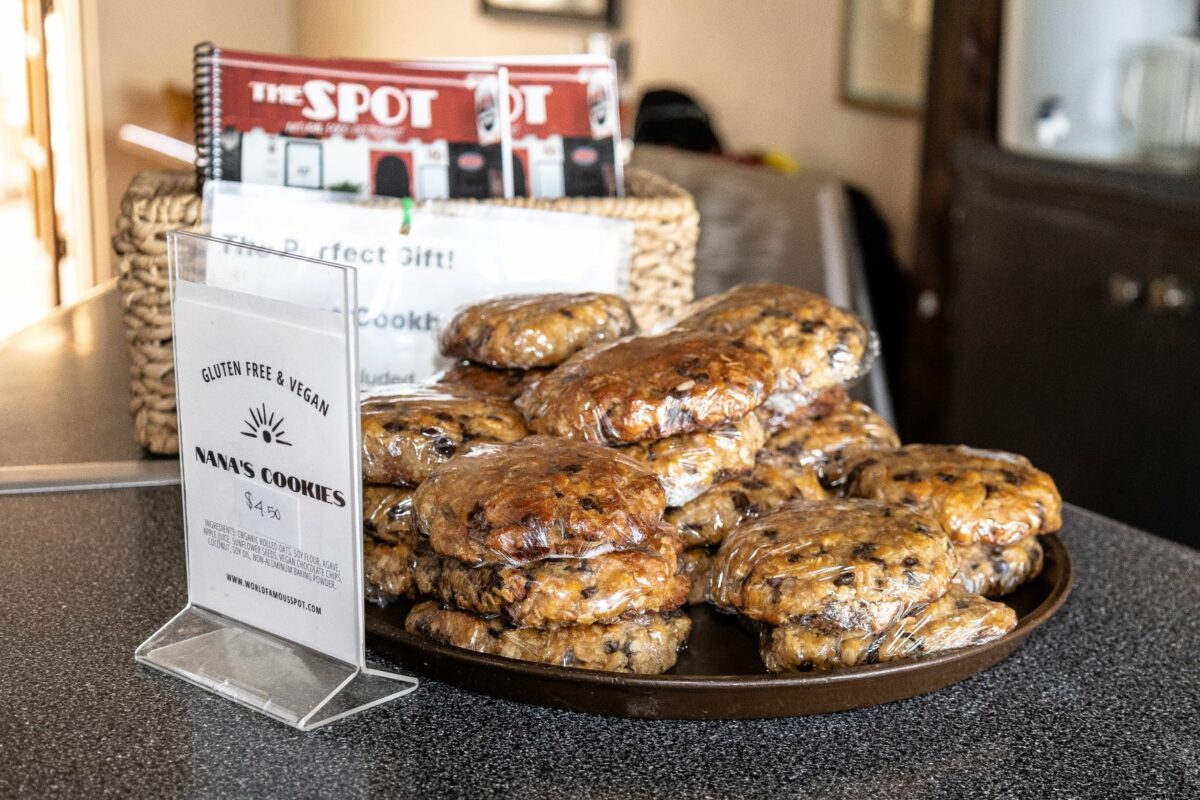 Gluten-free and vegan cookies, can be served with a scoop of vegan ice cream.

Customers speak reverentially about The Spot’s savory sauce, served generously with many of the entrees, including the savory spud baked potato, savory presto pasta, and savory steamers (vegetables and brown rice.) The Spot Veggie Burger has been featured in the Travel Channel’s “Hamburger Paradise Round-up;” and their mainstay comfort food, the Mushroom Walnut Loaf, is Sir Paul McCartney’s go-to take-out order.

McCartney has been a Spot regular since the Beatles performed at the Forum, where Beaudet would hang out backstage with McCartney’s son James. 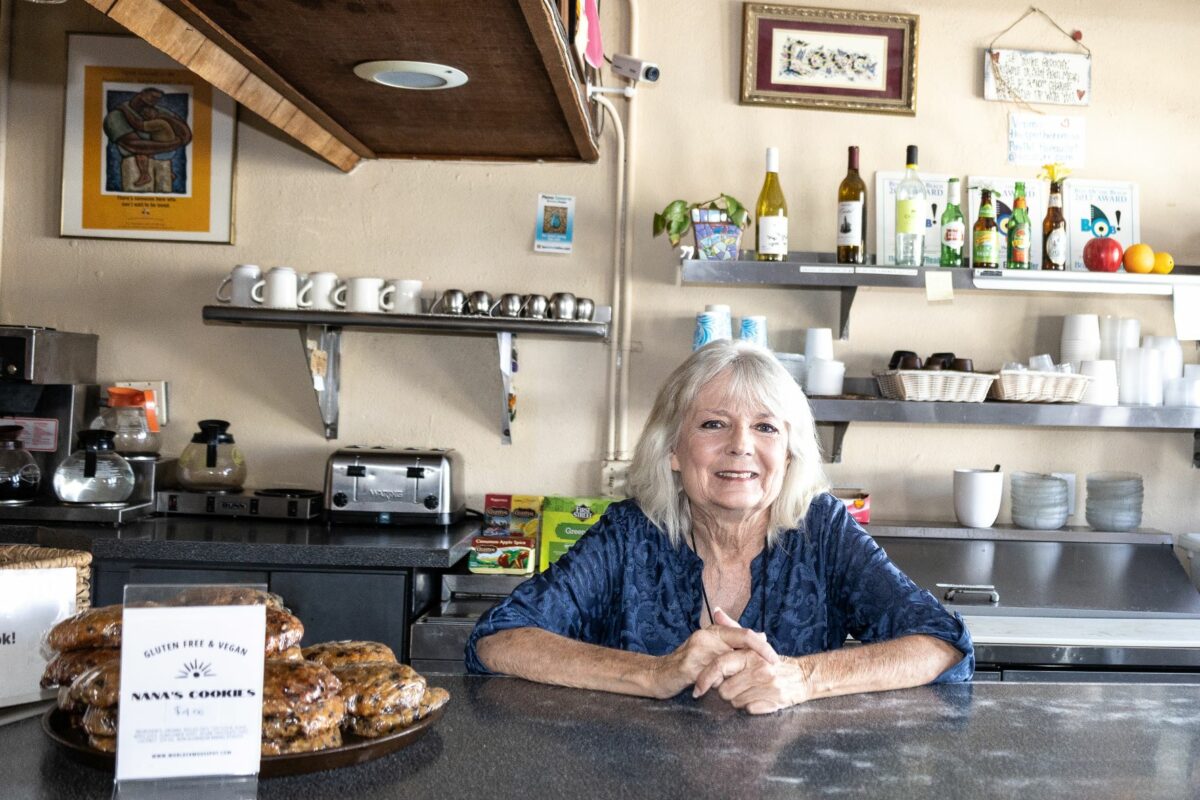 Tonya Beaudet, the face of The Spot since 1981.

Among those programs was the The California Arrearage Payment Program, or CAPP, a state program that deferred payment of, but did not dismiss utility bills, during the pandemic.

In spring 2022, while Beaudet was still recovering from the pandemic, she received a $30,000 utility bill.

“Just at a time when we were getting back on our feet, post-pandemic, then we were hit with this,” said Beaudet, who was under the impression the pandemic-period utility bills would be forgiven.

SCE spokesperson Ron Gales said he couldn’t address a specific customer’s case. But he said, “Our business customer division is doing analysis for customers to see if they are on the right billing plan. If there is a plan that is more beneficial to them, SCE will reach out to them.”

“In March 2020,” Gales noted, “in response to the emergency of the pandemic, Southern California Edison suspended collections on outstanding payments and suspended disconnections for two and a half years…”

In June, a GoFundMe page was started by close friend Deanna Cherry, whom Tonya met 25 years ago when the two were adopting their children.

The response has been heartening. Bob Goldberg, CEO of the plant-based alternative brand, Follow Your Heart, posted a donation plea for The Spot on his social media.

“Tonya’s humble passion for loving animals, and feeding people food created with love has been a powerful force for good in Southern California, spanning decades, and generations. I make her recipes almost daily. You got this, Tonya,” Michael Garcia commented on The Spot GoFundMe page.

“The Spot has donated lunches to the Cancer Support Center South Bay for years to accompany lectures…. May abundance and prosperity return to her soon,” commented Valerie Hooton

“It’s the kind of place that makes a neighborhood special,” commented Jane Smith.

Beadeut was 26 in 1981, when she and her husband bought The Spot. They planned to keep the restaurant until its lease ran out, in three years. Four decades later she is determined to keep its legacy alive.

“We are an institution, and we mean something. People depend on us. Failure is not an option,” she said.

To contribute to The Spot, visit GoFundMe.com/save-the-spot-vegetarian-restaurant. ER