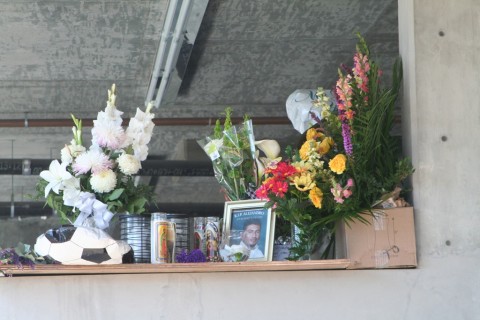 A shrine with flowers, votive candles and a photo with the words ‘R.I.P. Alejandro’ overlooks the spot where a worker died in a construction accident. Photo

Cal-OSHA officials said a contractor should have gotten a state excavation permit for shoring that was being performed when a worker was buried and killed at a large building under construction near South Park. The contractor said he had city permits, and did not know whether Cal-OSHA’s contention about a state permit was correct.

The worker, 29-year-old Alejandro Valladares of Hawthorne, plunged head-first into a hole at the construction site last Wednesday morning, coming to rest with only one of his feet above ground as loose soil collapsed around him. Coworkers tried unsuccessfully to free him, and he quickly perished.

An initial report from Cal-OSHA inspectors contended that a state permit was required for shoring work at the 8,000 square-foot building at Cypress Avenue and Sixth Street, because the hole the worker fell in was more than five feet deep, said spokeswoman Krisann Chasarik. Investigators estimated the hole into which Valladares fell was 15 feet deep.

The contractor, Dave Shaw of Shaw Engineering and Construction, said he did not know whether it was correct that he needed a state permit for the work.

“That I’m not sure about. I know we have permits to do everything we are doing there from the city, and we get inspections on everything we are doing,” he said on Monday. “I’m not sure if that’s a requirement. I don’t know if Cal-OSHA requires that, separate from the city. We had a [city] permit to shore on that job, and that’s what we were doing.”

Hermosa’s acting building director, Bob Rollins, confirmed that city permits had been secured for the project.

Cal-OSHA investigators cited an imminent safety hazard and stopped work at the site, where Shaw is building a field office for his 34-year-old company.

“We were in the middle of the process of shoring, and had holes that were still open,” Shaw said.

He said the holes would be filled and Cal-OSHA would return to inspect that work. Cal-OSHA, the California Occupational Safety and Health Administration, is responsible for investigating workplace accidents.

Cal-OSHA and Shaw continued to investigate how the accident happened.

The initial report from the state investigators stated that Valladares was standing on a piece of plywood placed over the fork attachment of a Caterpillar Bobcat, about six to eight feet above the hole, using a hand-held driver to push a beam down into the earth, Chasarik said.

“Apparently the vibration that he was making caused the plywood to slide off the fork, and he fell headfirst into the hole below him,” she said.

Shaw said the exact nature of the accident was still being investigated. He said he was told that Valladares was not standing on plywood, but instead was standing on a three-foot by 12-foot platform on top of the Bobcat forks. He was told the accident occurred when the forks fell of off the tractor, rather than the platform slipping off the forks.

“I have not talked to each individual employee…Exactly how it happened, we’re still trying to figure that out,” he said.

Shaw was not at the worksite when the accident occurred, but hurried there from Redondo Beach.

“Me, my superintendent, everyone on the crew, we’ll all be second guessing ourselves for the rest of our lives. What if we did this, what if we did that? What if I didn’t build the building? It’s been a living hell for all of us,” he said.

“For the life of me I can’t figure out how it happened,” Shaw said.

Shaw said the accident was the only one of that magnitude in the company’s history.

“The only other ones were a couple of back injuries and some stitches,” he said. “I’ve been working in Hermosa and Manhattan since 1976. We’ve done the majority of concrete work there for 34 years.”

The last construction death in Hermosa occurred about six years ago when a worker fell from scaffolding at a partially-built home on the walk street portion of Eighth Street near The Strand.

At a spot overlooking the hole into which Valladares fell, a shrine had been erected with flowers, votive candles and a photo of a handsome, goateed man with the words “R.I.P. Alejandro.”

Shaw described Valladares as “a great guy” who had worked for the company for about nine years, and lived in Hawthorne with a sister, a brother, two nieces and a nephew.

“This is a devastating situation,” Shaw said.

“We’re a big family. We have about 35 employees, two of them from the start in 1976, and others on through all the years. We all know each other and we work together. Definitely this is a family business. Everybody is devastated by this,” Shaw said.

“There’s a lot of support for each other. Every night there is a vigil at his house in Hawthorne,” Shaw said, shortly before leaving to take part in the vigil.

Shaw was helping with arrangements for a burial that will take place in Mexico, where Valladares’ mother lives. Services also were held this week in Hawthorne and Compton.

The accident occurred about 10:30 a.m. Wednesday, March 10. Los Angeles County Urban Search and Rescue workers, along with firefighters from all three beach cities and Torrance, and public works employees from all the beach cities, worked for about two and-a-half hours to extricate Valladares’ body.

City officials said a sewage line connecting a nearby duplex to the city’s system came loose, either during the work at the construction site or during the recovery of the body, causing raw sewage to seep onto the site.

City crews waited a number of days for Cal-OSHA to clear them to go onto the site, to repair the sewer line and clean up the mess.

Former City Councilman Bob “Burgie” Benz was critical of the city’s handling of the sewer break, saying officials should have turned off the water to the duplex and moved the occupants into a hotel until the sewer repair could be completed. City officials countered that the spill was confined to the closed-down construction site and did not pose a health threat while they waited to clean it up. ER