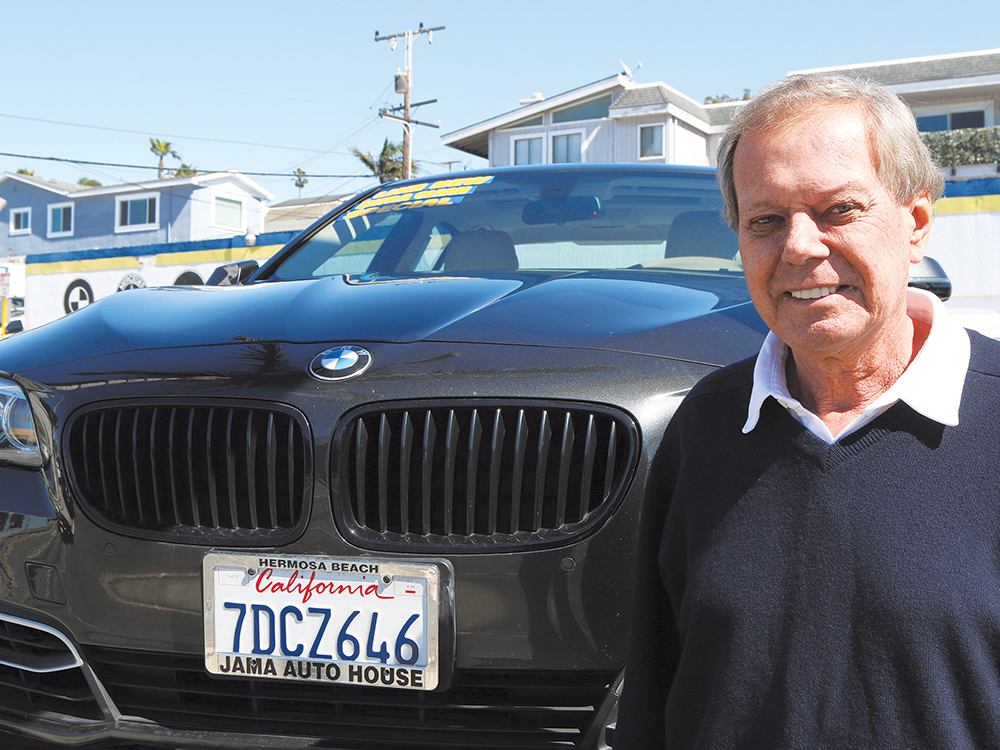 Lars Jacobsson at his Jama Autohouse in 2019. Photo by Kevin Cody

During a visit to Hermosa Beach, a Santa Barbara resident left her car at Jama Auto House in Hermosa Beach for service, and walked downtown for lunch. Upon her return, she told Jama owner Lars Jacobsson, “You must sell a lot of cars. I counted seven Jama license plate holders on my way back up Pier Avenue.”

The observation reflected the number of used cars Jacobsson had sold since opening Jama House on Pacific Coast Highway in 1983. Over the decades, Jacobsson developed what became known as Club Jama, whose members included grandparents whose grandchildren became his customers.

He attributed his success to the development of synthetic oil. “A Mercedes that used to run 200,000 miles on a single engine, now runs 500,000 miles,” Jacobsson said. As a result, high end used cars, which Jama specializes in, hold their value longer. He made the argument that his used Mercedes and BMWs were cheaper to own than new, mid-priced cars because his hourly service rates were half those of new car dealers.

His service rates were actually zero, under the one year warranty he offered. During the first year, customers were charged for parts only.

The former Porsche rally car driver grew up in Sweden, in a family of race car drivers, and fit the stereotype of the stoic Swede, until the subject turned to cars, And then customers might find themselves learning more about their car than they wanted to know. He wasn’t satisfied taking a customer’s money until he explained in detail the work his longtime mechanics George and Mihrn, and detailer Jessie had done on their cars.

That same Swedish disposition drove Jacobsson to continue working, while hiding from his family of customers that he had been diagnosed with bladder cancer two years ago.

“Despite extreme pain, he never complained and kept saying he was going to beat it. But finally, a few weeks ago, we had to take him to the hospital, where he insisted on walking from the car  to the check-in desk,” Andrea, his bookkeeper, whom he married in 1985.

Andrea, and sons Erik, 32, and twins Michael and Kevin, 29, are now running Jama, with the continued help of their longtime staff. ER